The patella can be fractured by a direct impact, a fall on a hyper-flexed knee, for example. The patella can also be fractured indirectly, in which an eccentric contraction of the quadriceps against resistance pulls the patella apart. An indirect fracture might be seen after a fall in which the foot striking the ground forces the knee into flexion.

Displaced patellar fractures need to be fixed surgically to regain normal knee extension. Some non-displaced fractures are also fixed to obviate the need for prolonged immobilization.

Although non-unions are rare after patellar fractures, anterior knee pain is frequently encountered after the fracture has healed. This knee pain may be present even if the articular surface appears normal on imaging.

The patella, commonly known as the kneecap, is a sesamoid bone that lies within the tendinous attachment of the quadriceps. The patella lies on the anterior surfaces of the femur (Figure 1). 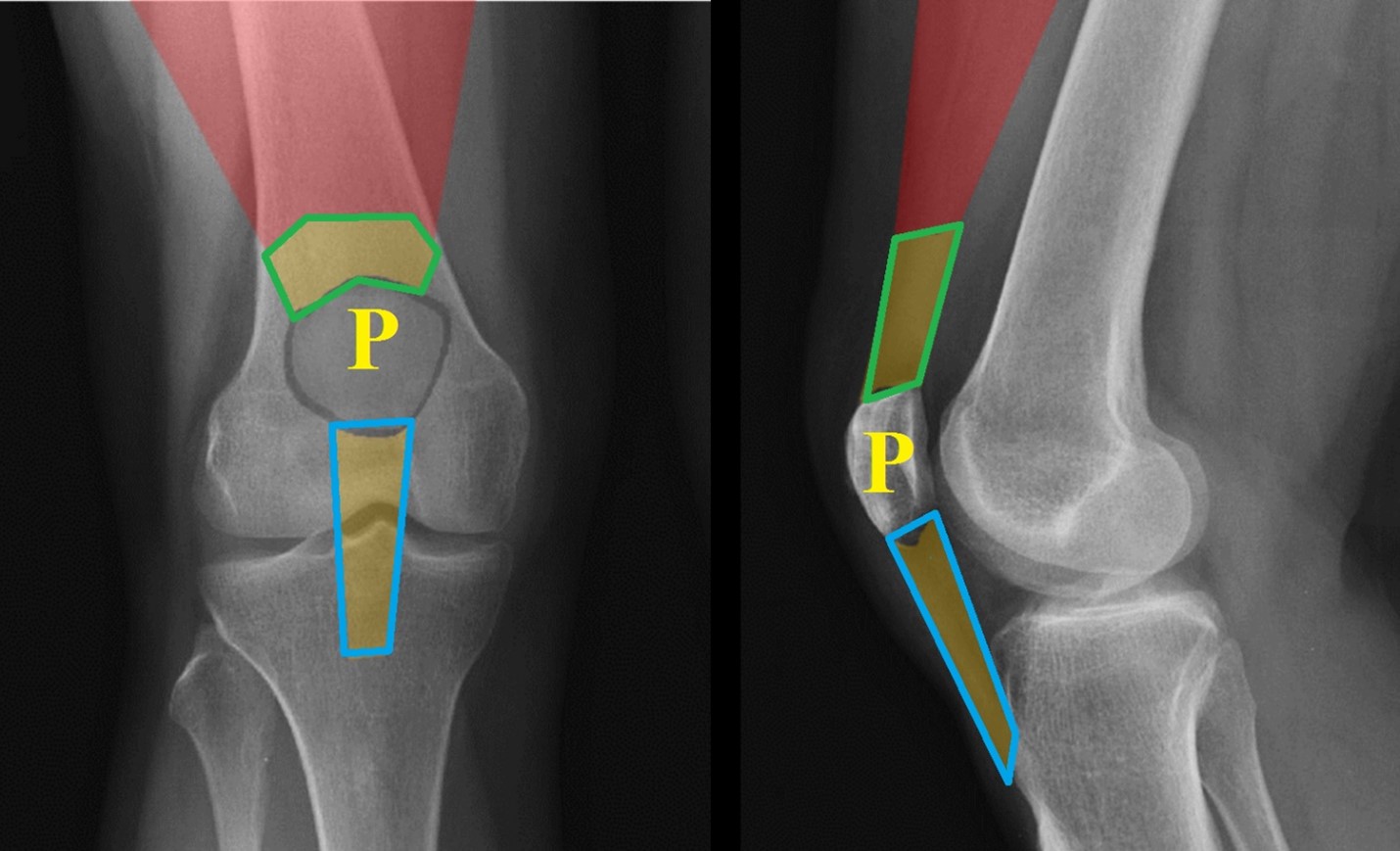 Figure 2: A sunrise view of the patella, showing the patella sitting within the trochlear groove of the anterior distal femur (T). (From http://www.wikiradiography.net/page/the+skyline+patella+projection)

(A brief word on nomenclature. What should one call the soft tissue connection between the patella and the tibia? Some use the term “infrapatellar ligament,” and others denote this as the “patellar tendon.” Both names are supported by logic. The tissue does connect bone to bone, rendering it a ligament. On the other hand, the tissue is the ultimate attachment of muscle to bone, rendering it a tendon. Technically speaking – because the patella is a sesamoid bone­, that is, a bone imbedded within a tendon – the tissue in question is more rightly termed the “quadriceps tendon.” That, however, would be very confusing, as the name would also apply to the tissue superior to the patella. By tradition, that supra-patellar tissue alone owns the name “quadriceps tendon,” and the tissue below is called variously “infrapatellar ligament” and “patellar tendon.” You will find both used in Orthopaedia interchangeably.)

Superiorly, the heads of the vastus muscles and rectus femoris converge and insert onto the patella. The aponeuroses of the vastus medialis and vastus lateralis muscles continue distally to form the medial and lateral patellar retinacula. These retinacula maintain the central alignment of the patella in the trochlea. The retinacula also maintain the connection of the muscles to the tibia, such that intact retinacula may allow for active knee extension even when a non-displaced patellar fracture is present. (Displacement of the fracture will tear the retinacula, and active extension will be absent.)

The primary function of the patella is to increase the extension force of the quadriceps muscle. This is achieved by shifting the quadriceps tendon and patellar ligament away from the center of rotation of the knee – that is, by increasing leverage by lengthening the so-called moment arm of the quadriceps. This increased power comes at the price of high joint reactive forces (see https://orthopaedia.com/page/Patellofemoral-disorders). As such, patellar fractures are often associated with the development of patellofemoral arthrosis.

Patellar fractures may be a consequence of direct or indirect forces on the bone or a combination of both. A direct fracture would involve a direct blow to the patella; an indirect fracture is caused by the pull of the quadriceps while the knee is passively flexed.

In a direct fracture of the patella, the resulting compressive forces produce a stellate (Figure 3) or longitudinal fracture pattern. At other times, the patella can be highly comminuted (Figure 4).

Because an indirect patellar fracture causes the bone to fail in tension, a transverse fracture line is produced. If the fragments are separated, the knee joint extension mechanism will fail, and the superior pole of the patella will be displaced proximally by the pull of the quadriceps muscle (see Figure 5). 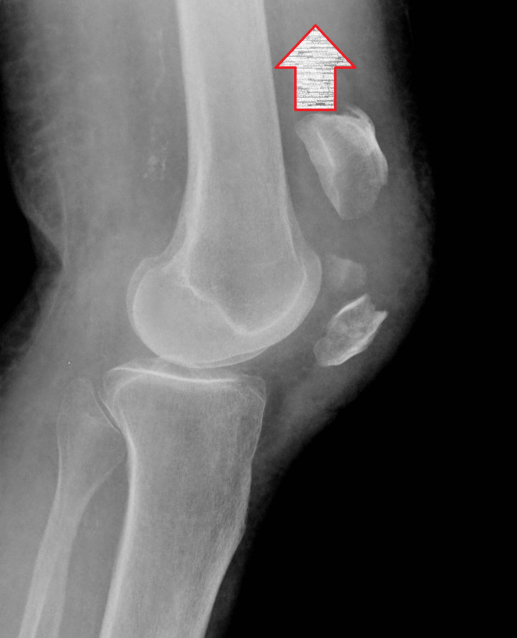 Figure 5: A displaced patellar fracture, in which the quadriceps pulls the proximal fragment more proximally (arrow). (From https://radiopaedia.org/articles/patellar-fracture-2)

In the cases of direct trauma, there will usually be evidence of bruising, abrasions, or a laceration. Swelling of the anterior knee due to hematoma or hemarthrosis is common.

If a break in the skin is detected, it will be essential to exclude communication with the knee joint itself, a so-called traumatic arthrotomy.

Usually, knee motion will be severely, if not completely, limited by pain. Active knee extension does not conclusively exclude the diagnosis of patella fracture, as the retinaculum may be in continuity and allow the quadriceps to exert a force on the tibia.

With indirect trauma and tension on the proximal fragment, a palpable (noticeable) gap between the separated superior and inferior poles can be detected if the retinaculum is disrupted.

An anteroposterior (AP) and a cross-table lateral view x-ray are usually diagnostic. These films will delineate the patella fragments and the degree of displacement, which can be measured from these images.

The cross-table lateral view may also demonstrate a lipohemarthrosis (Figure 6), namely an intra-articular fluid collection with blood and fat within it that has escaped from the none marrow due to the fracture. Lipohemarthrosis is rarely seen in isolated patella fractures and should prompt further investigation for an associated distal femur or proximal tibial fracture.

Figure 6: A schematic drawing and radiograph showing lipohemarthrosis. Note that the patella is intact here, as it usually is; lipohemarthrosis is more commonly associated with tibial plateau and distal femoral fractures. (Images courtesy of https://radiopaedia.org/articles/lipohaemarthrosis)

An axial projection (e.g., skyline or sunrise view) is sometimes also included in the patellar trauma series to provide a view of the patella in the trochlear groove. This x-ray may demonstrate fractures on the lateral aspect of the patella missed on other views and can show displacement of the articular surface.

Advanced imaging such as an MRI or CT scan is usually indicated only if other injuries need exclusion.

A bipartite patella can be identified in approximately 2% of the population, and it is present bilaterally in roughly half of these cases. Bipartite patella is seen nine times more commonly in males than females.

An acute patellar dislocation or subluxation may result from traumatic mechanisms similar to those that cause a fracture. Note that a patellar dislocation (which is nearly always lateral) may have been reduced prior to imaging studies, either spontaneously or by first responders in the field. There will, however, usually be residual signs on the axial view x-ray, such as some patella tilt (lifting on the medial side) or lateral displacement of the patella in the trochlear groove due to the rupture of the medial retinaculum. Medial tenderness over the retinaculum is another diagnostic clue.

Traumatic patellar dislocations may also cause osteochondral injuries due to the impaction of the patella against the distal femoral condyle. This impaction may occur during either the dislocation or on relocation, so the area of maximal tenderness may be medial or lateral. If a dislocation is suspected, it is important to look for evidence of associated injuries such as impaction fractures and osteochondral fragments. MRI may be needed for this.

An inability to extend the knee in the absence of a fracture on x-rays may indicate an injury to the quadriceps or the infrapatellar ligament.

In the case of a quadriceps rupture, the patella will lie either in its normal position or slightly distal. If the infrapatellar ligament is ruptured, the patella may displace proximally due to the unchecked pull of the quadriceps. MRI may be helpful for these diagnoses as well. 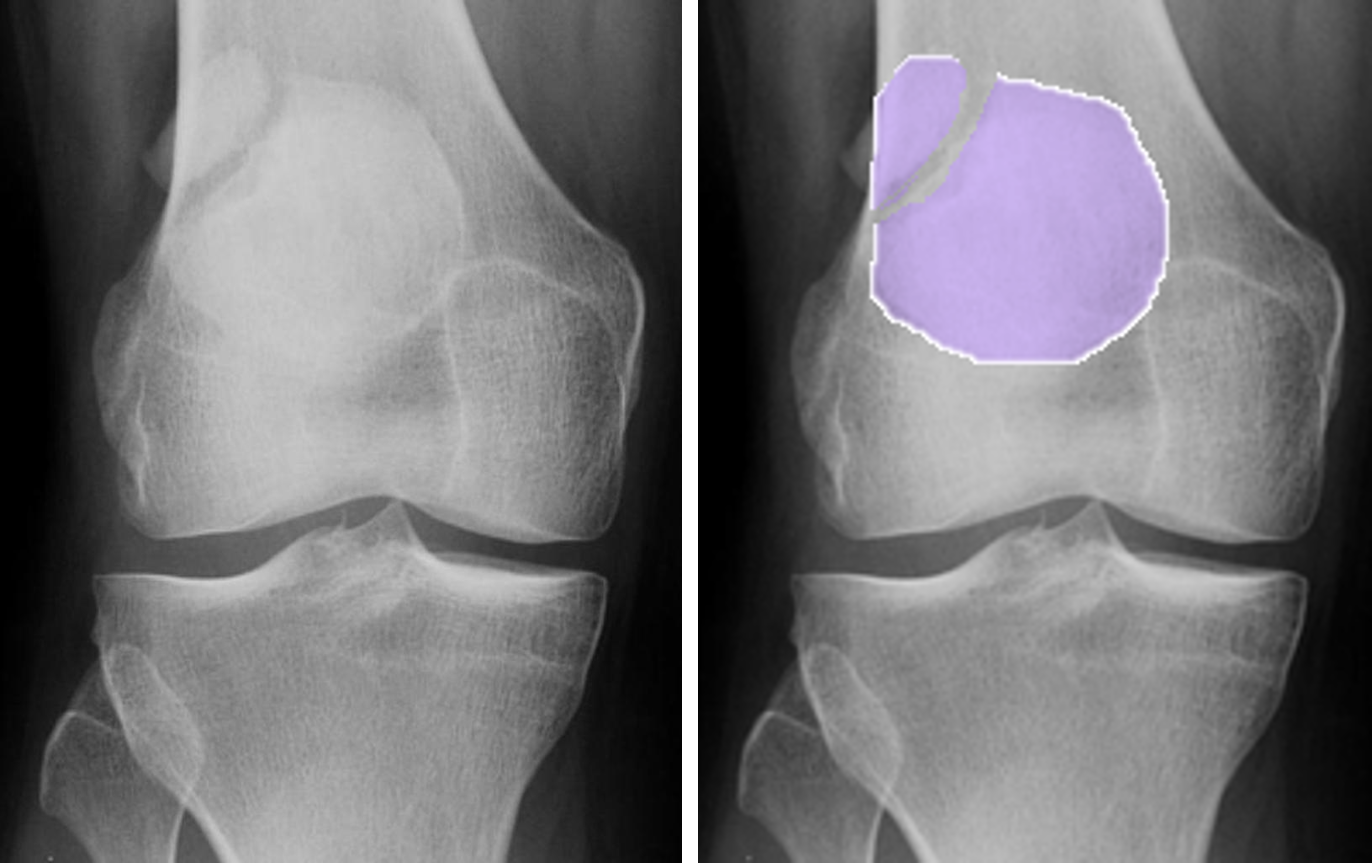 A patellar fracture with blood on the skin or air seen below the skin on radiography suggests an open fracture or traumatic arthrotomy.

A lipohaemarthrosis suggest an associated fracture of the distal femur or proximal tibia.

Non-surgical management is indicated for patellar fractures when the extensor mechanism is intact, displacement is minimal and is likely to remain so (see Figure 8). 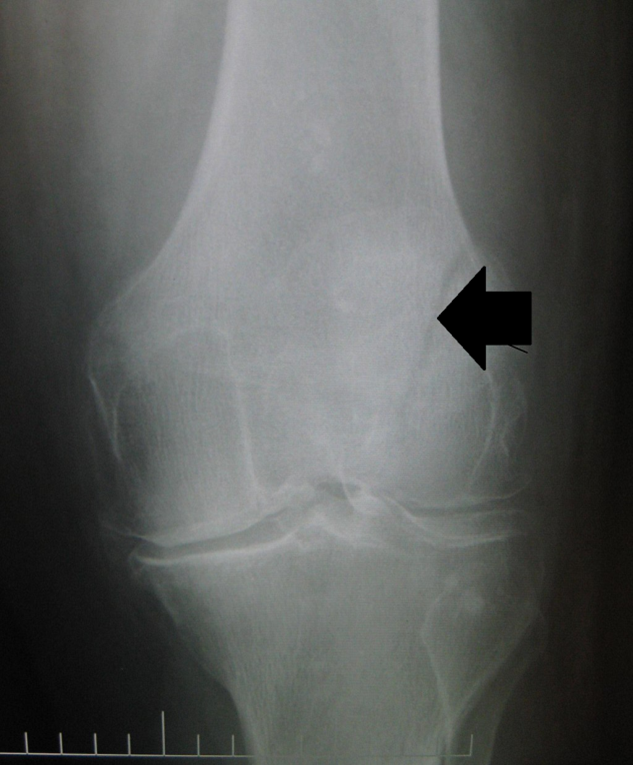 Figure 8: A non-displaced vertical patellar fracture (fracture line shown by black arrow). This fracture is likely to be stable, as the pull of the quadriceps is not apt to separate the fracture fragments as it might do with a transverse fracture. (From Wikipedia)

When a patellar fracture is treated non-operatively, the knee is usually immobilized in extension for about 3 weeks in a cast or brace. Physical therapy is then commenced to regain knee range of motion and strength gradually.

Non-surgical management in appropriately chosen patients leads to good results in 90% of patients. There is some risk of post-traumatic osteoarthritis from the initial injury to the articular cartilage. Also, even slight incongruity of the articular surface after healing can damage the cartilage on the trochlea, which in turn can further abrade the patellar surface, in a vicious cycle that produces post-traumatic arthritis.

Surgical fixation is indicated to treat patellar fractures when the extensor mechanism is disrupted, in the case of open fractures, when there is a significant articular displacement or when loose bodies or osteochondral fragments are present.

Options for fixation usually involve wiring techniques such as tension banding (Figure 9) for transverse fractures, or cerclage wiring for stellate fractures. Depending on the fracture configuration there may be indications for screw and/or plate fixation. 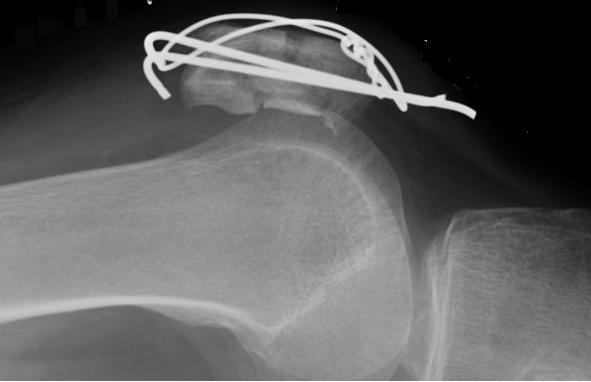 Figure 9: A tension band fixation of a patellar fracture. As seen in this lateral view, two thin metal rods called “k-wires” are placed in the patella, roughly parallel to the shaft of the femur/tibia; a malleable metal wire is then woven around the ends of the k-wire and tied along the anterior surface of the patella. (From Radiopedia https://radiopaedia.org/cases/patellar-fracture-comminuted-1)

At times, patellar fracture fragments are so comminuted that they cannot be fixed. In those cases, a partial patellectomy may be necessary. In this operation, the patellar tendon is reattached to the residual patellar fragment.

A total patellectomy should be avoided if at all possible because the loss of the patella markedly reduces quadriceps strength and knee function. It may therefore be preferable to use a cerclage wire to maintain the fragments in only an approximate position. Without anatomic reduction, the joint surface will heal with irregularities. Still, this approach preserves the bone, which could then be used to support the insertion of a prosthetic device later, should symptoms demand it.

All patellar fractures can be complicated by knee stiffness, nonunion or malunion, and degenerative joint disease. Indeed, some residual symptoms are very common, despite optimal care.

Because of the superficial location of the patella, surgical hardware can be irritating and may need to be removed once the fracture is sufficiently healed.

Beyond the usual risk factors for any broken bone (e.g., osteopenia and exposure to trauma) the patella is at risk for fracture if a piece of it has been harvested (as in the case of anterior cruciate reconstruction) or partially resected (as in total knee arthroplasty). It is therefore critical to avoid excessive resection of bone in those procedures.

“K-wires” are named after Martin Kirschner (1879-1942), a German surgeon from Heidelberg who in 1909 described using thin wires in the management of fractures.

The use of tension band wiring for patellar fractures dates back to 1877 when an old houseman of the Joseph Lister at King’s College Hospital in London performed the first case. He got the idea of using the technique from his mentor who had successfully used a silver wire for a non-united olecranon fracture 4 years earlier (1873). Patella and olecranon injuries involve a tension-type force with an extensor mechanism attachment disruption. Lister soon followed this with 7 cases of his own that he presented in (1883). He reportedly removed the wires at 8 weeks. Fortunately for his patients, Lister was also the father of antisepsis and diligently used this approach in his surgical procedures.

“Kneecapping” is a form of torture in which the victim’s patella is maliciously injured – often by an organized crime leader intending to send a message about who is the boss. It is particularly effective not only because the patella is so sensitive, causing initial intense pain, but because perfect healing of these patellar fractures is rare, with residual pain acting as a constant reminder of the intended lesson.