The content that follows is intended for healthcare providers. This material was prepared for educational purposes only. We therefore disclaim any and all liability for any damages resulting to any individual which may arise out of the use of the material presented here.
The information provided here cannot substitute for the advise of a medical professional. Even if a statement is completely true in the abstract, it may not apply to a given patient.

Anterior knee pain may be found with patellar instability (subluxation or complete dislocation of the patella out of the trochlear groove) or patellofemoral arthrosis. It may also have no objectively defined cause, in which case the label “patellofemoral pain syndrome” is applied. Many patients with patellofemoral pain syndrome improve with no treatment. Patellar instability may be treated with muscle strengthening therapy or braces; at times, however, surgery is needed.

The patellofemoral joint is formed by the patella and the anterior surface of the distal femur, an area called the trochlear groove.

The patella is a sesamoid bone that is embedded within the quadriceps tendon and serves to increase the mechanical advantage of the quadriceps muscle. The undersurface of the patella is composed of two main facets, lateral and medial. The lateral facet is longer and less steep, matching the geometry of the lateral aspect of the trochlea.

Figure 1: A sunrise view of the patella, showing the patella sitting within the trochlear groove of the femur. (from http://www.wikiradiography.net/page/the+skyline+patella+projection) 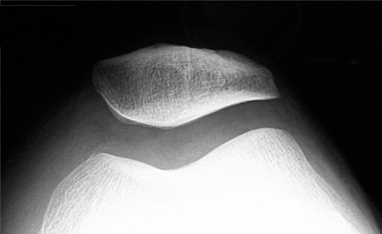 Stability of the patella in the patellofemoral joint relies on normal trochlear morphology of the femur. The trochlear groove must be sufficiently deep to hold the patella, especially in flexion. Stability also depends on the alignment of the tibia relative to the femur. A so-called valgus or "knock-knee" alignment of the knee joint increases the lateral vector of the quadriceps. If the lateral vector is too great, the quadriceps can pull the patella out of the trochlear groove, especially as the knee nears terminal extension. This can be assessed by two measurements: the angle between the quadriceps and the infrapatellar ligament, so-called Q angle and the tibial tubercle to trochlear groove (TT-TG) distance (Figure 2). 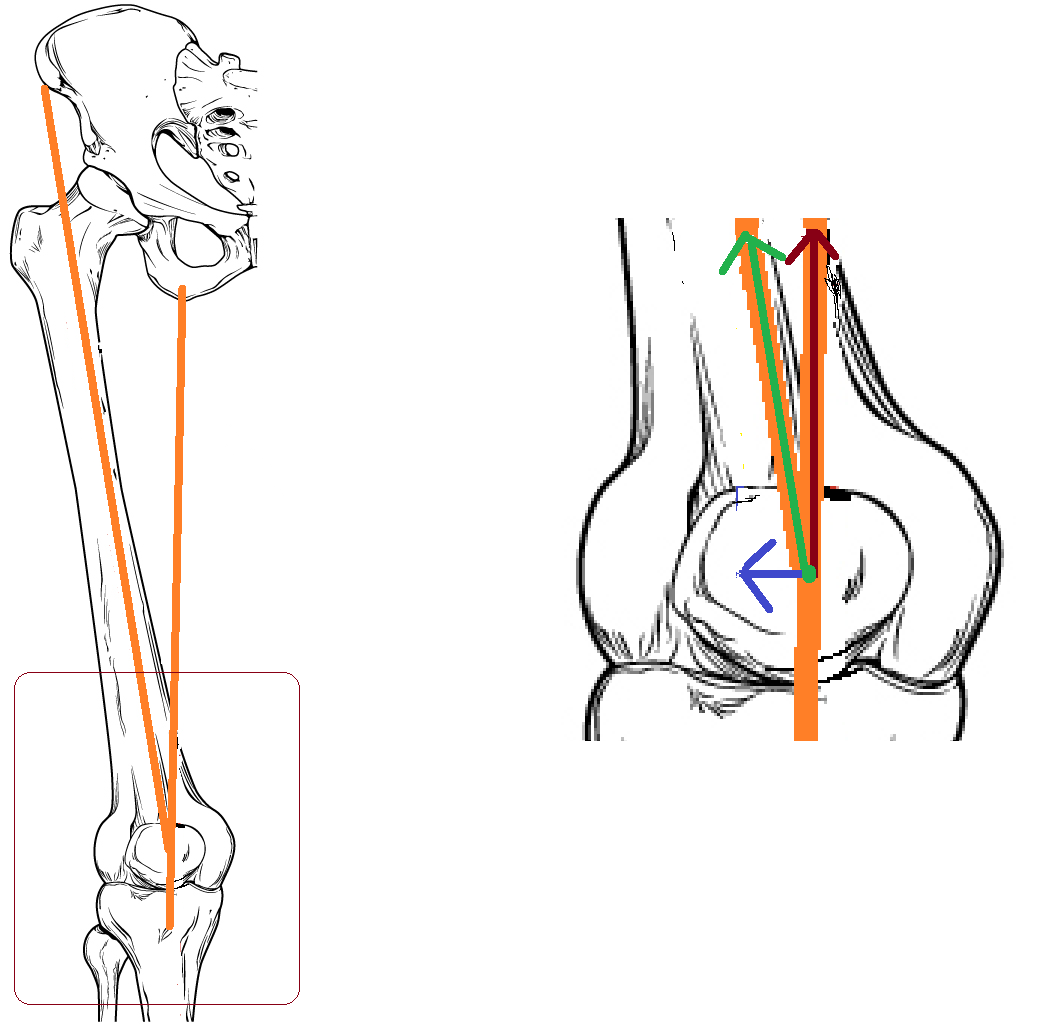 The vastus medialis obliquus provides dynamic stability, actively pulling the patella medially, to keep it located within the joint (Figure 4).

Figure 4: As shown, the pull of the vastus medialis obliquus (red line) has a medially-directed component (white arrow), which tends to stabilize the patella. Weakness or atrophy of this muscle is thus associated with patellofemoral disorders. 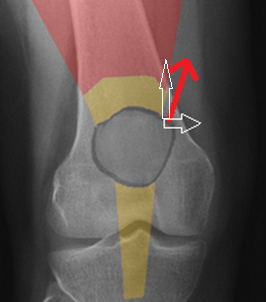 During initial knee flexion (<30 degrees), the major restraints to lateral translation and dislocation are the soft tissue structures; beyond 30 degrees, the bony structures are the primary determinants of stability.

In cases of so-called patella alta, a longer than normal patellar tendon allows the patella to rest more proximally. As a result, the patella does not enter the trochlear groove until higher-than-normal levels of knee flexion have occurred. In patients with recurrent instability, trochlear dysplasia has been noted to be present in up to 96% of patients.

A thorough patient history and physical examination are critical components in diagnosing patellofemoral pain syndrome and patellar instability. Patients will report pain and possibly swelling in their knee with increasing intensity such as climbing or descending stairs, squatting, running, jumping, or "cutting" during sports activities.

Patients may also note overall weakness in their leg as well as a feeling that their knee might “give way” again in cases of patellar instability. Discoloration medially and pain along the medial aspect of the knee are commonly seen. The number of prior identifiable dislocations and subluxation episodes for the patient as well as any history of ligamentous laxity or dislocation of family members must be noted.

Physical examination should note alignment and range of motion; the presence or absence of tenderness should be noted as well.

Examination maneuvers are shown in the figures 5-8.

Figure 5: The Patellar glide and tilt test: With the patient lying in the supine position and the knee extended, the patella is grasped and first translated medially (green arrow), and displacement is measured in quadrants. Displacement of less than one quadrant medially indicates tightness of the lateral structures,  whereas hypermobility is indicated by displacement of more than three quadrants. The examiner next uses the thumb, touching the lateral side of the patella, in an attempt to tilt the patella from its resting position  (red arrow). The patella should “tilt” back to at least the neutral (equatorial) position, i.e., the medial and lateral facets are parallel to the exam table. 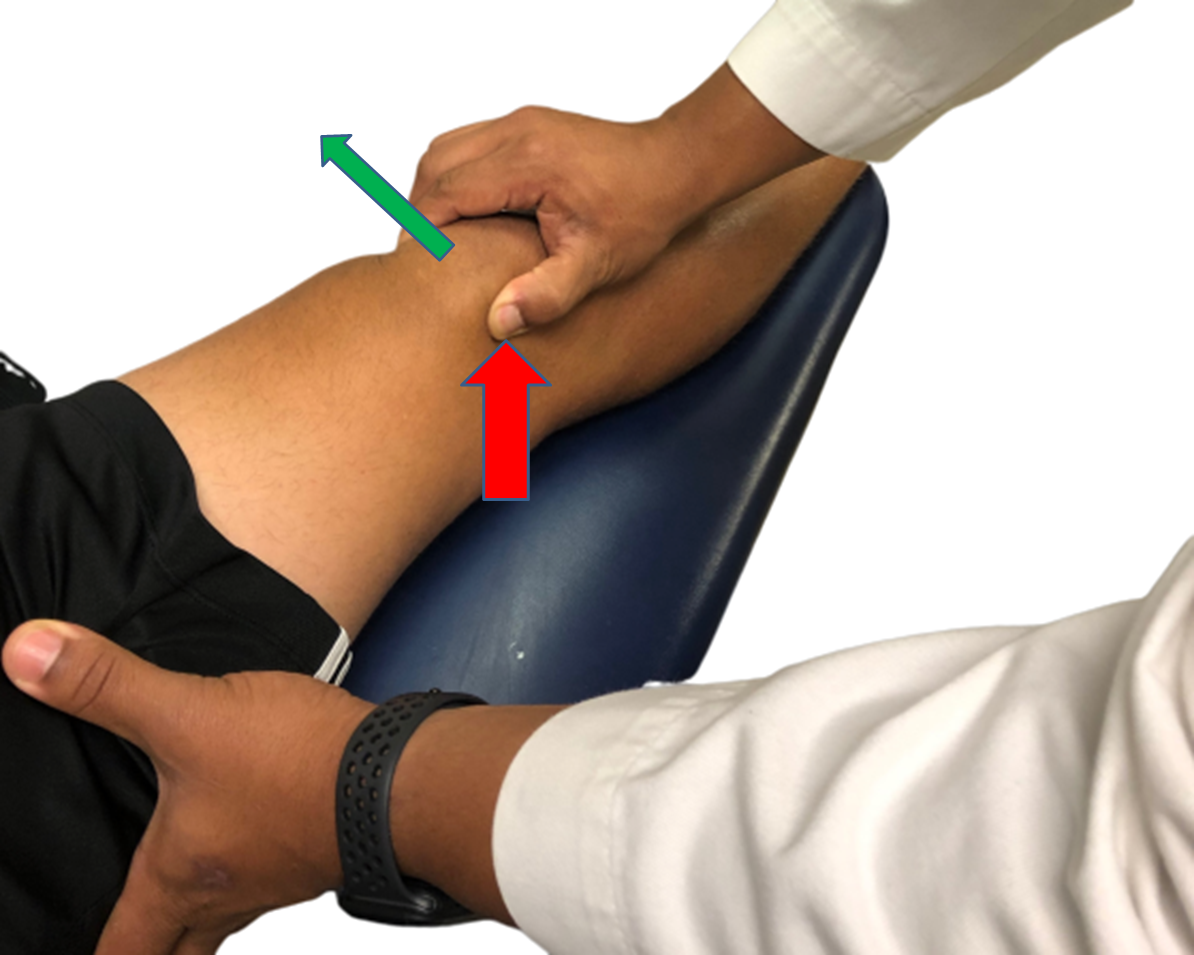 ,
(Note that these maneuvers are performed in sequence, not simultaneously. For the two tests, the position of the patient and the examiner are the same, with the only difference being the motion of the examiner’s thumb, hence a single photo is shown. These test do address a unified issue: namely, can the patella be moved passively a “normal” amount?)

Figure 6: Patellar inhibition: in the presence of arthrosis, a patient will not want to load the damaged area, and will actually shut off (“inhibit”) the quadriceps if that muscle is forcing the contact. This can be elicited by asking the patient to kick out (purple curved arrow) against resistance (red arrow). Subtle relative weakness suggests inhibition and in turn arthrosis of the patellofemoral joint. (Because a different point of the patella articulates in different degrees of flexion, the best way to assess patellar inhibition is to have the patient actively extend the knee against resistance at 30, 45, 60 and 90 degrees of flexion.) 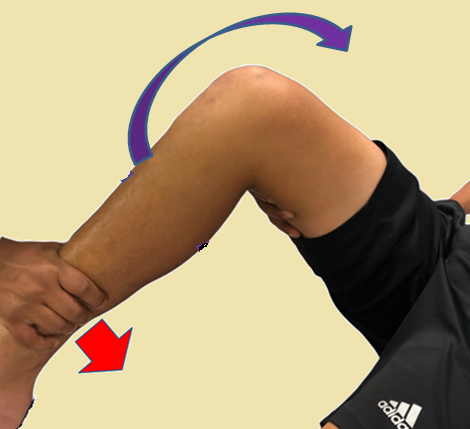 Figure 7: Patellar apprehension: the examiner tries to push the patella out of the trochlea with the knee extended. A reported sense of impending dislocation (“apprehension”) is a positive test. 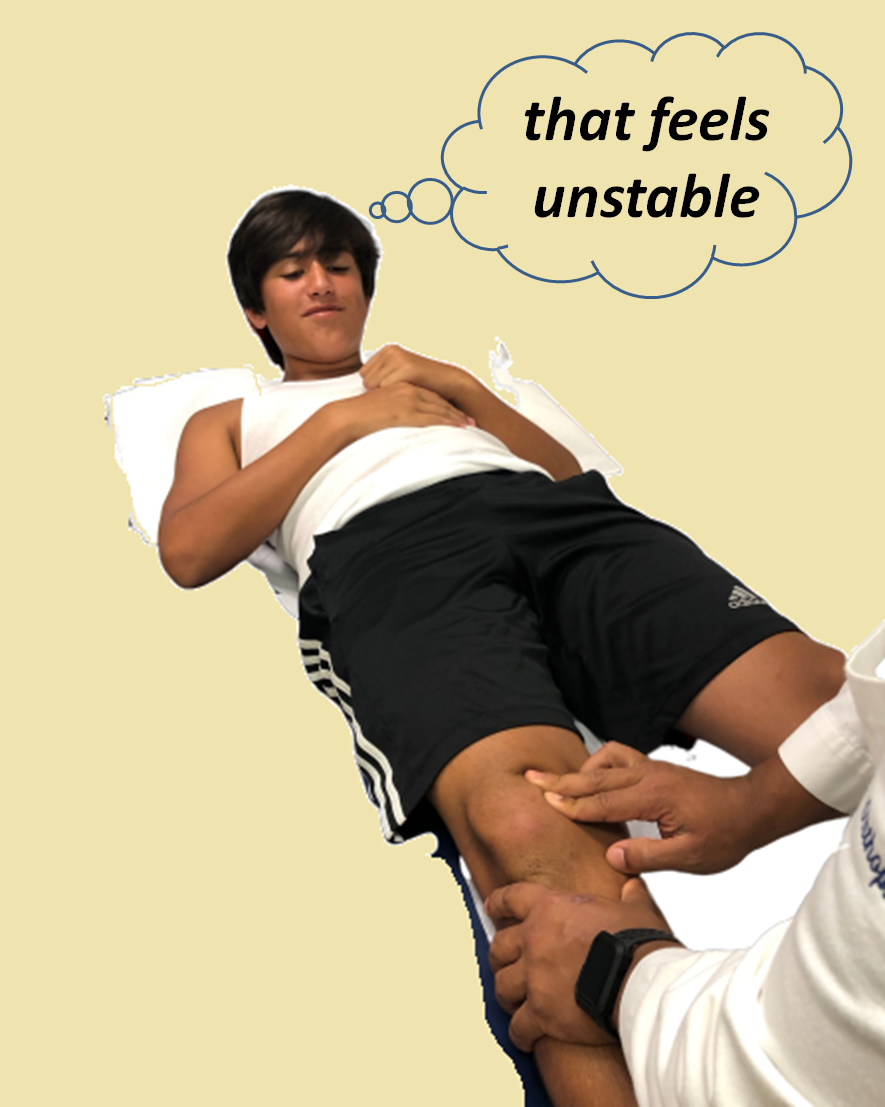 Figure 8: Patellar tracking (J-sign): The examiners scrutinizes the position of the patella when the knee moves from full flexion (top panel) to mid-flexion (middle panel) and then extension (bottom panel). In full flexion, the patella, outlined in red, will be located in the trochlea groove even if the soft tissues are lax; but in the setting of laxity, the patella will move to a lateral position in extension. Thus, if the soft tissues are lax, the patella will follow a “J” or “L” course when the knee moves from flexion to extension, or vice versa (left vs right). In the figure, the model is normal, and no “J” sign is demonstrated: the patella remains central. 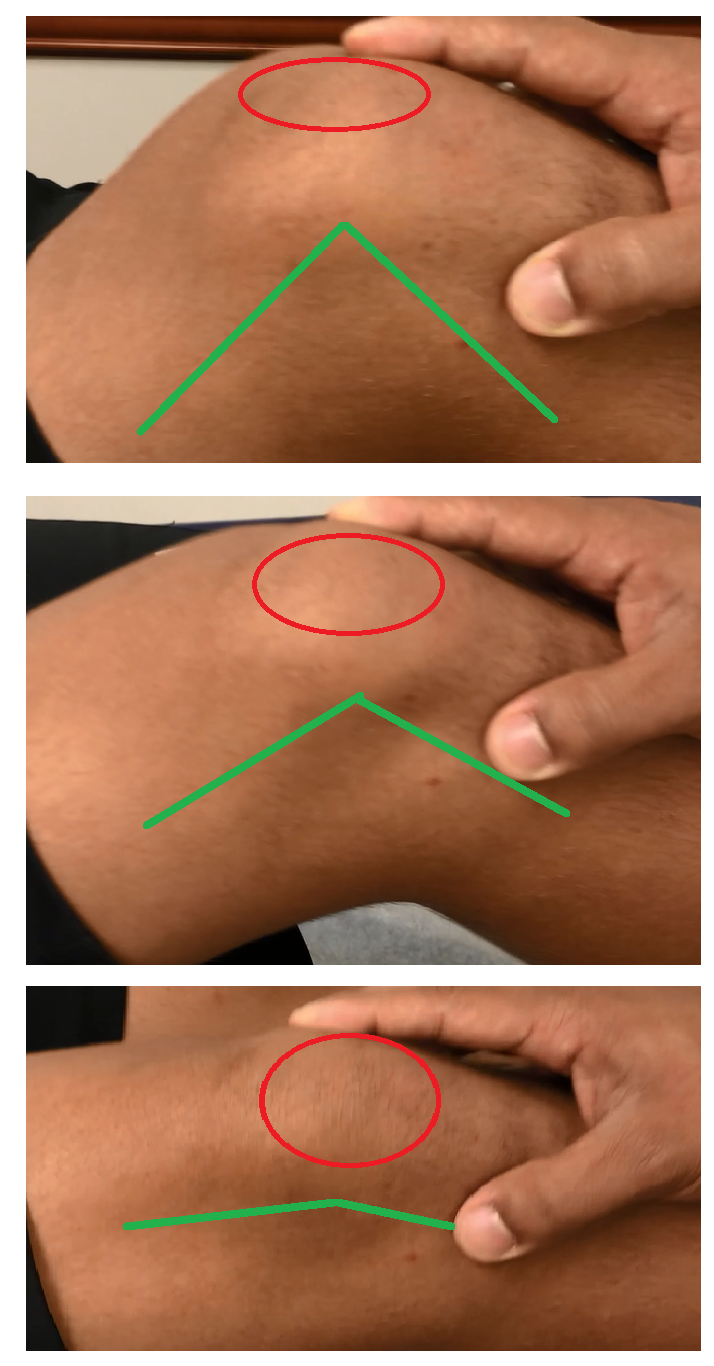 Most patella dislocations occur laterally; therefore, the lateral patellar apprehension test represents the best test for determining patellar instability.
The quadriceps and patellar tendons should be palpated to detect tendinosis.

Additionally, a Lachman’s test, pivot shift, anterior and posterior drawer test, dial test, and varus/valgus stress test should be performed to rule out other injuries.

Patellofemoral pain syndrome is primarily a clinical diagnosis and can be made without radiographic imaging. Nevertheless, x-rays will commonly be ordered to rule out structural abnormalities.

In cases of suspected patella instability, anteroposterior and posteroanterior 45° weight bearing views should be obtained to examine any abnormal anatomy, particularly current presence of dislocation. Lateral radiographs should be ordered to examine patella height, trochlear dysplasia and patellar tilt.

The sunrise view (Figure 9) can evaluate for lateral subluxation and patellar tilt.

Figure 9: In this sunrise view, the normal patellofemoral joint is shown on the x-ray, with the red line outlining patellar tilt (rotation of medial side up) as well as lateral subluxation. Both contribute to excess compression laterally. 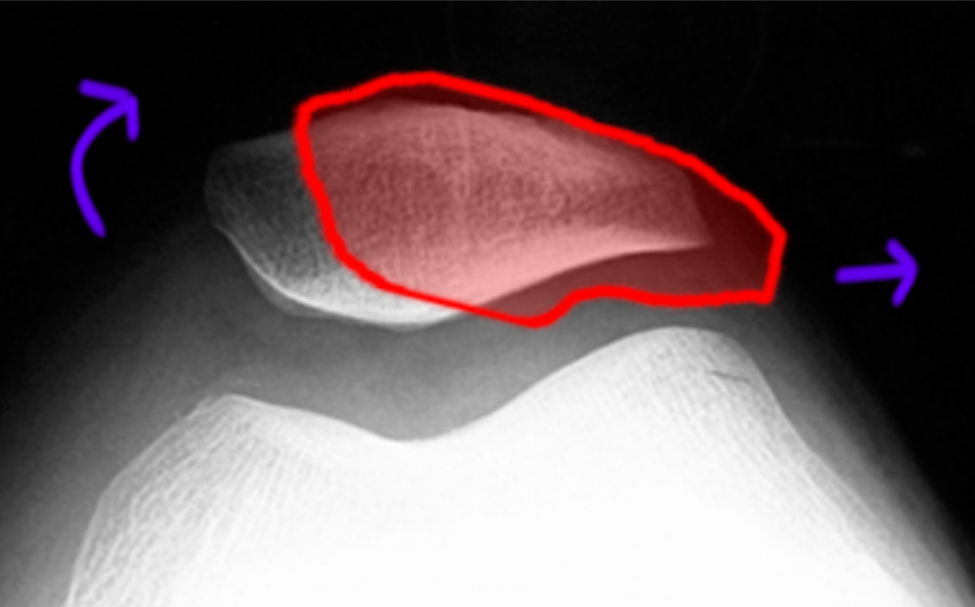 MRI is valuable in assessing for cartilage/osteochondral injury as well as soft tissue structures of the knee. MRI will help evaluate any articular cartilage damage on the medial facet of the patella and bone bruising of the lateral femoral condyle.

Figure 10: MRI of an acute patellar dislocation. Edema is seen in both the patella and the lateral condyle, reflecting the impact (“kissing contusion”) between these bones when the patella dislocated laterally. The red lightning bolt points to the disrupted medial patellofemoral ligament, whereas the lateral ligament is intact (blue star). (Case courtesy of Dr. Hector RiveraMelo, Radiopaedia.org, rID: 27014)

At times, patellar dislocations reduce spontaneously, such that the patient may not be aware that the patella dislocated other than feeling a shift in their knee.

Patients may report buckling due to patellar inhibition, but of course true ligamentous laxity must be excluded before that diagnosis is credited.

Gross laxity of the patellofemoral stabilizers may suggest a connective tissue disorder, such as Ehlers-Danlos syndrome.

Incomplete passive motion after a patellofemoral dislocation suggests a loose body within the knee.

A knee sleeve, splint, or taping may be used as well. This may help hold the patella within the trochlea. Alternatively, these may help simply by serving to remind the patient to avoid full flexion.

Recovery from patellofemoral pain syndrome can take longer than most patients anticipate.

Patients with pain but without a correctable anatomic lesion are rarely helped (and may be hurt) by surgery.

Patients sustaining their first dislocation can be treated with a brace. However, even in first time dislocations (especially if there is a large hematoma that raises concern for osteochondral injury) – an MRI is useful. This test can detect loose bodies and assess for any damage to the ligaments and cartilage.

After a first-time dislocation, physical therapy (PT) is started 1-2 weeks after the dislocation, to help achieve normal range of motion and strength and is continued for 2-3 months. In some cases, 4-5 months of PT is necessary in order for athletes to return to their pre-injury level of activity.

For patients with an open growth plate, surgeons will commonly perform an isolated soft tissue procedure and then perform the realignment surgery after closure of the growth plates to prevent further cartilage damage underneath the kneecap as well as to prevent arthritis from developing.

In cases of extreme dysplasia, operations to deepen the base of the trochlea or elevate the lateral facet (so-called trochleoplasty procedures) may be performed. This approach has not gained widespread acceptance among orthopaedic surgeons.

For either procedure, rehabilitation typically lasts 4-6 months post-surgery and final recovery and return to sports is not usually achieved until after 6 months from reconstruction (when full range of motion, stability, and strength have been restored).

Following completion of a thorough rehabilitation program, patellofemoral pain syndrome commonly resolves–but to prevent recurrence, appropriate conditioning of the muscles around the knee, particularly the quadriceps and the hamstrings is essential.

After an initial dislocation, the ligaments are stretched from the injury; therefore, patients are at an increased risk for either a recurrent subluxation or dislocation. The incidence of recurrent instability following conservative treatment has been noted to be between 15% and 44%. After a second dislocation, the risk of recurrence increases to over 50% and in younger patients (less than 25 years of age, particularly those with open growth plates) the risk of recurrence after a second dislocation has been noted to be as high as 70%.

Following operative treatment, the success rate for stabilization has been noted to be as high as 85% - 90% for both soft tissue and bony procedures.

Risk factors for patellofemoral pain syndrome include females and young adults as the condition is commonly referred to as “runner’s knee”, due to the high occurrence in athletes. Additionally, malalignment of the kneecap and overuse from vigorous athletics or training are also significant risk factors.

For patellar instability, risk factors include young age (under the age of 25 with a peak incidence between ages 10-16 years old) and open growth plates (this is particularly a risk factor for patients after primary dislocation). A prior history or patellar dislocation or subluxation represents a significant risk factor as up to 44% of patients treated conservatively may experience a second instability episode.