What are the temporal limitations regarding our ability to diagnose septic arthritis definitively?

(And how do we get around that?)

A definitive diagnosis of septic arthritis requires culturing organisms from synovial fluid. The problem is that it may take days for bacteria to grow (even longer for fungi and yeast).

Waiting for final culture results allows for the most accurate diagnosis and most judicious use of antibiotics to treat septic arthritis, but the longer a patient goes without treatment, the more joint damage that the white blood cells are able to inflict on the cartilage as they fight the infectious agent.

We avoid otherwise necessary waiting time by using a clinical decision rule * to make a good guess about whether an infection is present: aspirate the knee fluid and count the white cells. The assumption is that a high white blood cell count (usually >50,000/uL with >75% PMNs) indicates an active infection. If this threshold is crossed, treatment is warranted and the patient is started empirically on antibiotics.

By contrast, the specific threshold suggested by the green arrow (let’s say 75,000) will limit the false positives.

In practice, a compromise value, as shown by the purple arrow is often used. This value is adjusted to suit the clinical scenario.

For example, if the patient has a known risk factor for septic arthritis, perhaps 40,000 cells might be considered positive, whereas if surgery is deemed risky in a patient with degenerative arthritis present already (high risk and low reward for operating), a threshold of 60,000 might be better. 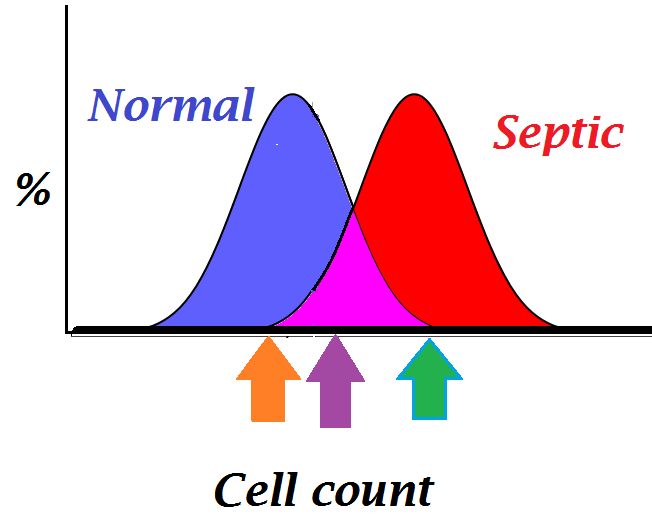 A gram stain can also be utilized to visualize any “bugs” in the aspirated fluid and can help guide management. (There are two limitations with using the Gram stain for guidance: first, it does not tell you what bug is present. Also, while specific, this test isn't very sensitive. Last, it is probably “operator dependent,” that is, more skilled observers will see things more clearly and accurately.)

Taken together, aspirating the joint and using the cell count (and Gram stain) to initiate an empiric therapeutic plan allows for an appropriate balance between over and under-treatment and will likely preserve the articular cartilage at risk from white-cell inflicted damage.

* This is more properly phrased “These days, we avoid otherwise necessary waiting time by using a clinical decision rule to make a good guess about whether an infection is present....”  That is, it is likely that in the next few years diagnostic methods will change, for the better. Tests such as the Alpha-defensin Lateral Flow Test invented by Carl Deirmengian (see Figure 2) may soon be far more accurate than the clinical decision rules we currently use. Indeed, such tests may be one day more accurate that bacterial cultures. See Ponseti Broke the Iron Triangle. Clin Orthop Relat Res. 2018 Aug; 476(8): 1569–1572 https://www.ncbi.nlm.nih.gov/pmc/articles/PMC6259775/

Figure 2: Carl Deirmengian, MD, synovial fluid researcher and orthopaedic surgeon. [MEGAN WAITING FOR CARL TO SEND ME A PICTURE. IF HE DOESN’T, WE DELETE]

*** the choice of surgical irrigation vs aspiration at the bedside is one that more reflects the practitioner’s training and guild membership than science: both are reasonable choices, but surgeons tend to perform surgery (and vice versa).