Neurogenic claudication and vascular claudication are distinct clinical entities that share a similar clinical symptom: pain and impaired walking. (The word claudication comes from the Latin word, claudicare, meaning “to limp.”) Additionally, they share a common basic pathological mechanism, ischemia, although the targets of ischemia are different.

Decreased space in the spinal canal compresses the thoracic spinal cord or lumbar nerve roots (Figure 1) and impedes perfusion accordingly. The resultant ischemia can lead to pain and weakness in the buttock and posterior thigh; the calf can be involved, but the symptoms are usually proximal.

Spinal stenosis is often diagnosed with MRI or CT scan, as axial imaging can show it best.

Neurogenic claudication is often exacerbated by prolonged upright standing or laying down and is relieved with bending over, such as on a bicycle or pushing a shopping cart. These latter positions of spinal flexion, riding a bicycle or pushing a shopping cart, tend to maximally open the spinal canal, whereas extension of the spine as seen with upright standing tends to compress the central canal. (This is analogous to Phalen’s maneuver compressing the carpal tunnel, with pressure relieved by holding the wrist in a neutral position.) 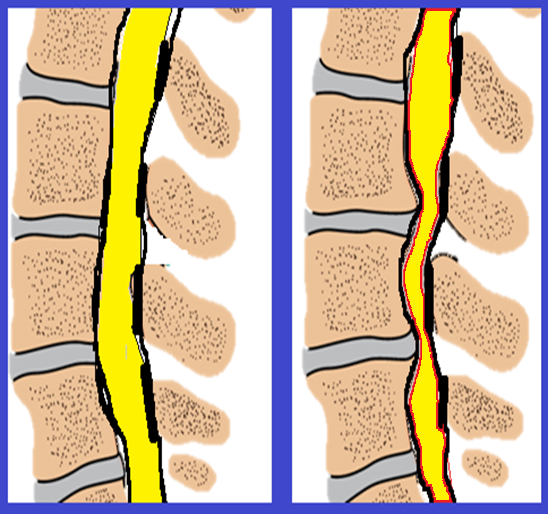 Figure 1: Sagittal illustration of the normal canal volume (left) and that seen with spinal stenosis (right). The compression of the cord or the nerve roots by bone overgrowth, as shown, is a common cause of neurogenic claudication. There is no disc protrusion seen in the figure, though disc abnormalities are common findings too.

Because the disease is mediated by decreased blood flow, the symptoms appear first distally in the calf. This stands in contrast to neurogenic claudication, which causes symptoms in the buttock and posterior thigh primarily.)

Also, because the disease is mediated by decreased blood flow, vascular claudication presents with pain in a “dose-dependent” fashion, meaning that pain is initiated and worsened with increased movement and is alleviated by rest. The crescendo/decrescendo pattern usually has  specific distance markers, e.g. the pain starts at one block of walking and becomes intolerable at three blocks. For that reason, patients can be described as having “3 block claudication.” (The symptoms of neurogenic claudication are less related to distance walked or duration of activity and more to spinal position in flexion and extension.) 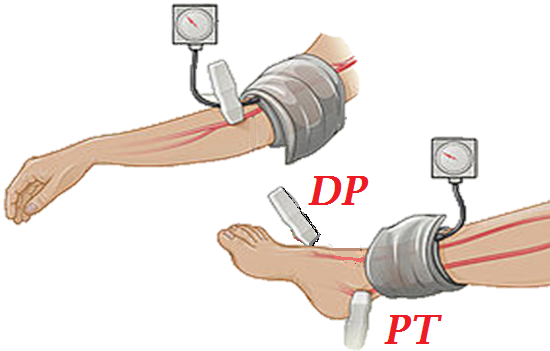 Figure 2. Illustration of measuring the ankle-brachial index (ABI). An ultrasound transducer, as shown, may be better than a simple stethoscope. Note that the ankle pressure can be measured by assessing either the dorsalis pedis (DP) on the dorsum of the foot or the posterior tibial (PT) artery behind the medial malleolus. Modified from https://en.wikipedia.org/wiki/Ankle%E2%80%93brachial_pressure_index#/media/File:Pad_abi.jpg

Because vascular claudication is a symptom is provoked by activity it may be masked in patients with arthritis or cardio-pulmonary disease who don’t walk for other reasons besides poor leg perfusion.