If you have right hip arthritis and are forced to carry a heavy suitcase, which hand should be in?

Because an arthritic joint hurts more when it is loaded, it follows that an individual with hip arthritis would like to minimize the load on that joint. That means people with hip arthritis would like somebody else to carry their suitcases. But let’s say a person with one bad hip (in this example, the right side) has no choice and must carry something heavy. Should the person carry it on the right (bad) or left (good) side?

A glib (and correct) answer is that the weight should be carried on the side which minimizes forces across the painful (right) hip. But that leaves unanswered, which side is that?

The correct answer is to carry the heavy object on the same side as the painful, arthritic hip. The reason is that this produces lower joint reactive forces.

(What follows is probably the most complex (and longest) answer of all in the set. There are a lot of worthwhile concepts discussed here, so please dive in!)

When standing on two feet, the load on each hip joint is 1/2 of the individual’s body weight (i.e. half on each side). That should be obvious. What might not be obvious, is when an individual is standing on one leg (even without moving) the force at the hip articulation is not equal to total body weight but rather multiples of that due to the pull of the abductor muscles which are working to prevent the body from tipping over.

When one leg is off the ground, if unopposed, gravity would have the person tip toward the side of the lifted leg. Luckily, however, there are forces that may pull in the opposite direction (hip abductor muscles). This is “luckily” in the sense that it keeps the person upright even with one leg lifted; it can be considered “unluckily” in that this generates a lot of force on the affected hip.

Critically: the load on the hip joint when standing on one leg is the sum of body weight and the forces needed to balance.

To see why, you first have to keep in mind the image of a seesaw (also known as a teeter-totter) shown below in Figure 1. 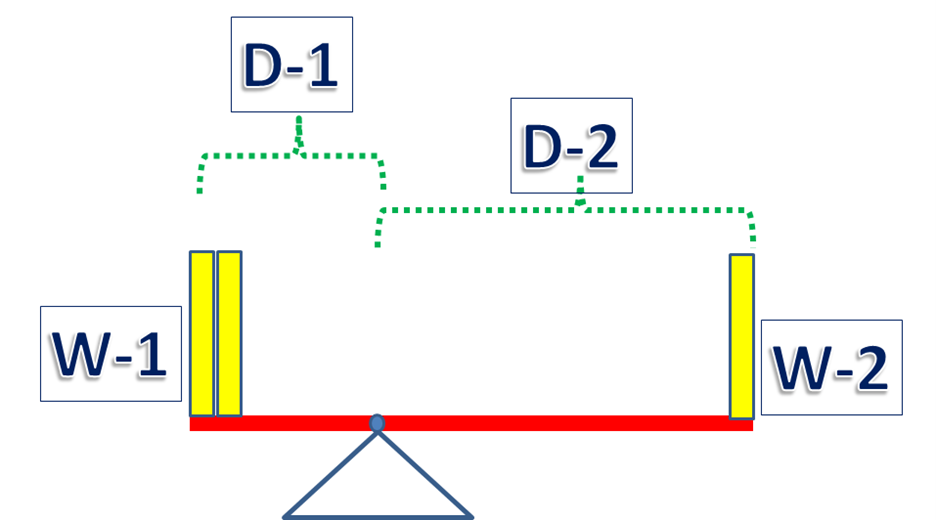 Figure 1: Although the weight on the left side (W-1) is twice that on the right (W-2), the seesaw is in balance because the distance between W-2 and the fulcrum (D-2) is twice that of D-1

Two children of different weights can balance on a seesaw if the lighter child sits farther from the fulcrum. A seesaw is balanced when the weight on one side, multiplied by the distance from the center fulcrum, is equal to the weight on the other side, multiplied by its distance from the center fulcrum.  In technical terms, the torque generates on each side is weight x distance, and when (W-1 x D-1) is equal to (W-2 x D-2), the net torque is zero.

The next thing to consider (when thinking about how the arthritic hip is happier when the total load is lower) is the sum of the weights on a balanced seesaw.

In Figure 2, a “free body diagram” representing forces about both hips in normal, two-legged stance is shown. Note that the figures used are drawn to represent the anatomic position of the lower extremities in standing. Here, F[B] = weight of body (situated in the body’s center of gravity, around the umbilicus) is balanced between the right and left fulcrums representing the right and left legs. The force on each hip would be one half of body weight. 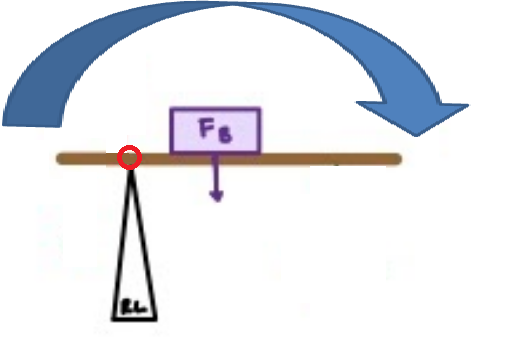 In Figure 3, we now see a free body diagram representing standing on one (right) leg. If there is no balancing “left leg force” (because the left leg is lifted while walking), one’s center of mass would tend to tilt the body away from the right hip towards the left side. The hip is accentuated in red in this figure to highlight the analogy to a “seesaw” and a curved blue arrow is added to represent the body’s tilt around the hip.

To prevent such a tilt, a counter-balancing force (F[AB])  is needed on the right hip, as shown in Figure 4. “F[AB]” is generated by the abductor muscles (gluteus medius and minimis). In this figure, the counterforce “F[AB]“ is acting against “F[B]” in single right-leg stance and keeping the seesaw in balance. 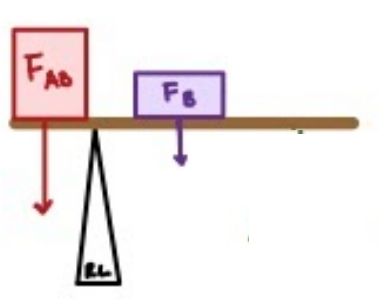 You will notice, first, that “F[AB]“ must be greater than “F[B]” as its lever arm (also known as “moment arm”) is shorter. Just as a seesaw can balance two children of unequal weight by varying their distance from the center, the body can be balanced by unequal forces set at proportionally unequal distances from the fulcrum. As a ballpark estimate, “F[AB]“ is about two times “F[B]” because the lever arm is half as long.

The second thing to notice is that if you were to put a sensor inside the right hip joint itself, the total force would be the sum of “F[AB]” and “F[B]”. That sum is what the hip “experiences”; it is called the “joint reactive force.”

Next, we consider adding a load (in this case, a suitcase) at the side of a patient with right-hip arthritis.

If held on the left (the “good” side): If the patient were to hold the suitcase on the left side, there is an even greater tendency to tip leftward, so more counteracting force would be required to keep the patient from tipping to the left when standing solely on their right leg. Therefore, holding on the left would increase force across the arthritic joint and cause increased pain for our patient: not a great solution. This is depicted by the larger box in Figure 5. The free body diagram demonstrates increased counterforce (F[Ab]) of holding a suitcase on the same side of the good limb, where F[Sc] represents the force of the suitcase and the larger F[Ab] box represents the greater counterforce required about the arthritic hip. The total joint reactive force --what the hip perceives-- is the sum of the load: F[AB]  + F [extra] + F[B] + F[Sc]. This is shown in Figure 5. 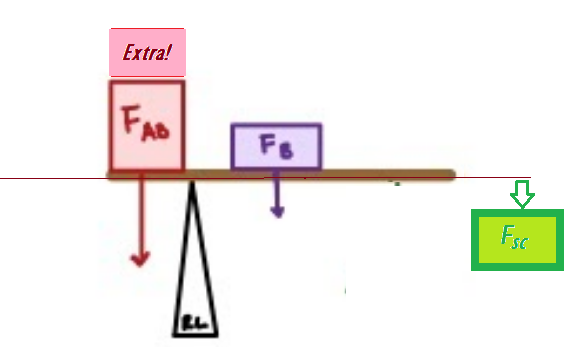 If held on the right (the “bad” side): If the patient holds the suitcase on the right side, the patient is required to generate less abductor force to counteract the gravitational pull toward the lifted left leg. This is shown in the free body diagram in Figure 6. As shown, a lower counterforce (F[Ab+]) is needed when holding a suitcase on the same side of the good limb, as F[Sc], now on the right side, helps prevent tipping. The reduction in force as, compared to the original abductor force, is highlighted in the circle. 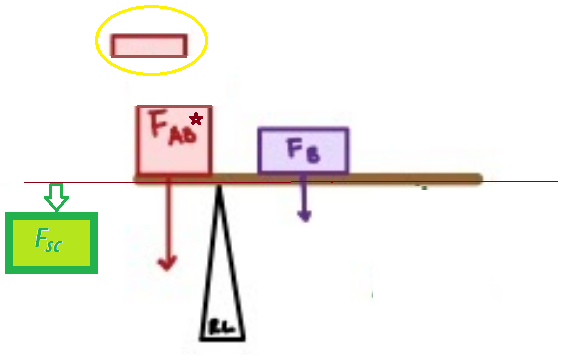 Note that the above diagrams are simplified to show the net resolution of the vectors and not the vectors of muscle action about the hip. (For a more precise description of these forces, please read the original article Tan V., Klotz M.J., Greenwald A.S., Phil D., Steinberg M.E. Carry it on the bad side! Am J Orthop. 1998 Oct; 27(10):673-7.)

In review, although it may seem intuitive to hold a heavy object on the side opposite to the damage, a patient with hip arthritis should hold any weight in the hand ipsilateral to their “bad” side. This generates less force, and therefore less pain, across the joint.