What’s the significance of blood on the skin with a fifth metacarpal fracture?

The most common mechanism of injury for a fifth metacarpal fracture (also known as a boxer's fracture) is punching. Direct trauma to a clenched fist loads the metacarpal bone axially. This puts a bending force on the bone, causing it to fracture at its neck (Figure 1). 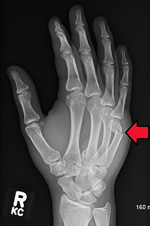 If a patient is discovered to have a fifth metacarpal fracture, the skin near the metacarpal head must be closely inspected for any breaks. That is because when a metacarpal fracture is sustained by a manual blow to the face, the recipient’s tooth may lacerate or abrade the puncher’s hand. Indeed, blood on the dorsal skin near the knuckles (metacarpophalangeal joints) of all fingers, with or without fractures, suggests a laceration or abrasion caused by a tooth.

This lesion is known as a “fight bite” and carries with it specific requirements for management, namely, cleaning the wound and giving antibiotics.

The human mouth is teeming with bacteria. Thus, a wound caused by a human tooth is typically polymicrobial, with Streptococcus viridans, Staphylococcus aureus and Eikenella corrodens commonly seen, along with other gram negative organisms. Treatment involves operative debridement of the wound and joint capsule followed by a period of time where the wound remains open for drainage. IV antibiotics (amoxicillin with clavulanate or a 2nd or 3rd generation cephalosporin) are used to target the likely pathogens, with coverage tailored based on culture results.

It is particularly important to recognize a possible fight bite because many times the recited history will not be accurate. Some patients will be embarrassed that they lost their temper and punched somebody; some are sociopathic enough to be proud of this, but still are chagrined to have been injured in the process. Thus, the presenting history may be “I fell” or other implausible narrative. 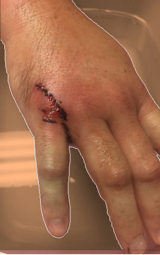