What is the function of the ACL?

How do ACL tears occur - and why might it be the case (as we suspect) that skiing-related tears of the ACL in the knee occur disproportionately after 2pm?

The anterior cruciate ligament (ACL) connects the femur to the tibia and stabilize the knee join. The ACL resists anterior translation of the tibia relative to the femur; it also resists rotation.

The cruciate ligaments are named according to their attachment on the tibia: the ACL courses from the posterior aspect of the intercondylar notch on the femur and inserts on the anterior tibial plateau. The PCL courses from a more anterior position in the femoral notch to the posterior aspect of the proximal tibia. The term “cruciate” refers to the fact that these ligaments cross each other (see Figures 1, 2 and 3). (The root word is ‘crus’ meaning ‘cross’. The term “excruciating” refers to pain likened to the suffering of crucifixion.) 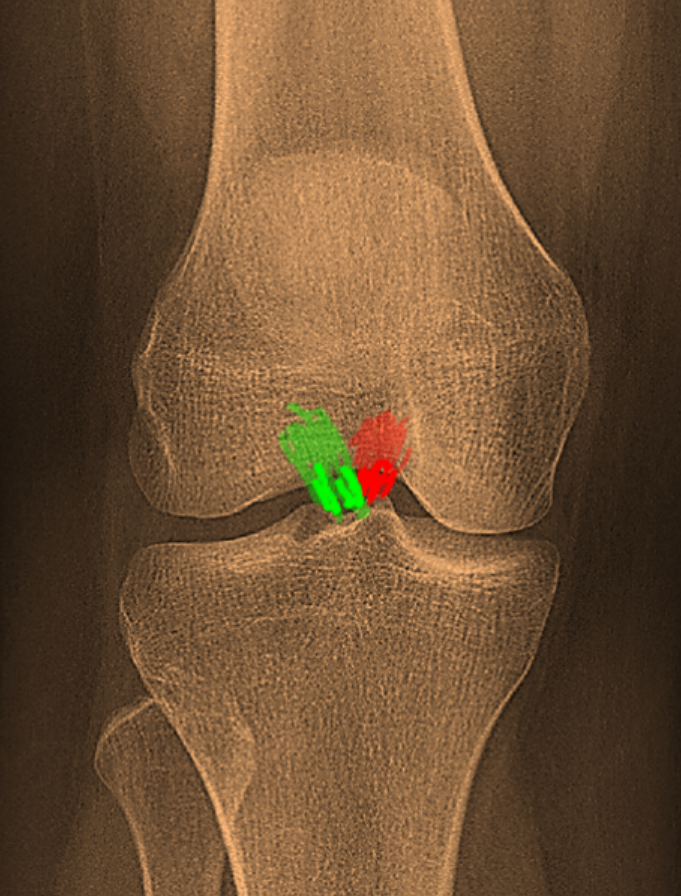 Figure 1: The anterior (green) and posterior (red) cruciate ligament seen in the intercondylar notch. The ACL courses from the lateral femur in a medial direction to insert on the tibia. 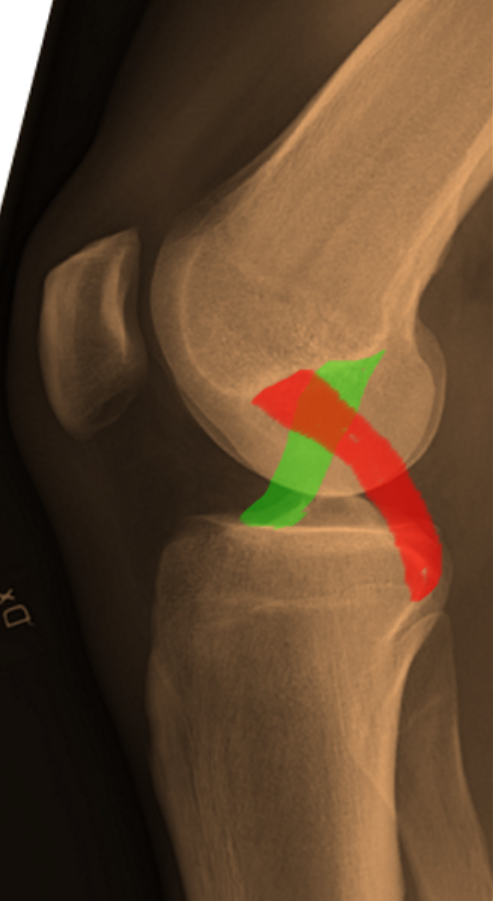 Figure 2: A lateral view showing the anterior (green) and posterior (red) cruciate ligaments. Note the ligaments are mostly vertical; this orientation is suboptimal for resisting anterior/posterior translation but allows the knee to flex and extend more freely than a purely horizontal orientation would allow. Note also that the ACL inserts on the top of the tibia (the plateau) whereas the PCL inserts about 1 cm below the joint line. 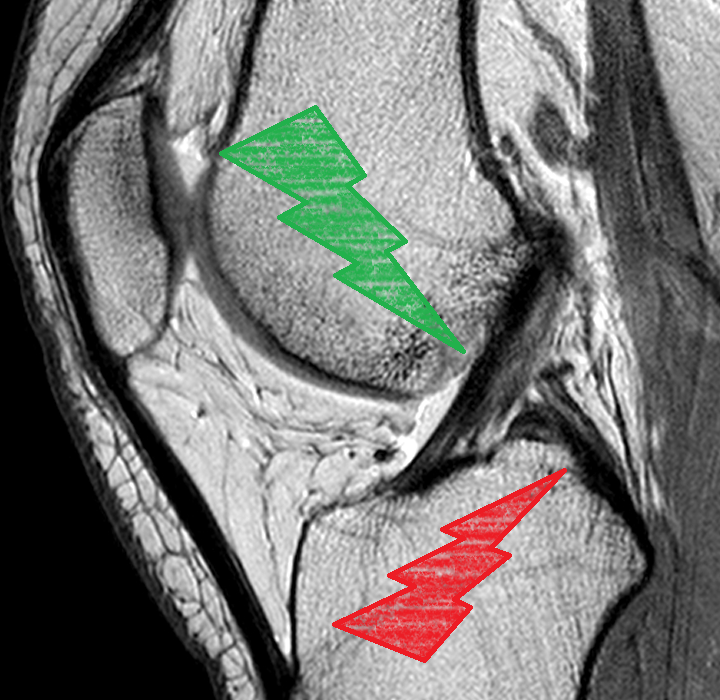 Figure 3: An MRI sagittal slice within the notch showing the anterior cruciate (green) and a small piece of the posterior cruciate (red). Because the ACL courses lateral (femur) to medial (tibia) and the PCL courses medial to lateral, it is rare to see both ligaments simultaneously on one single MRI image (Case courtesy of Dr. Andrew Dixon, https://radiopaedia.org/images/20228493)

How do ACL tears occur?

Tears of the ACL occur when the tibia goes one direction and the femur goes in another and the distance between the origin of the ACL on the femur and its insertion on the tibia exceeds the length of the ligament. Indeed, that ‘exceeded the distance’ mechanism is how all ligament tears occur.

Actually, there are a few simplifications above. For one thing, the sentence would read better as “ the distance between the origin of the ACL on the femur and its insertion on the tibia exceeds the length of the ligament after it has maximally deformed.” That is, the ligament can stretch a bit without any damage. (That is so-called elastic deformation). The ligament can stretch a bit more, but with internal damage (plastic deformation). That corresponds to a Grade II injury: a tear with the ends in continuity. Finally, the ligament can completely tear, producing a Grade III sprain.

The second simplification, really an elision, is that “the tibia goes one direction and the femur goes in another” does not fully describe where the bones go. Primarily, “tibia goes anterior and the femur goes posterior” describes what happens, but there is also a rotational component. Specifically, because the ACL originates on the lateral femoral condyle and inserts medial to the midline on the tibia, internal rotation of the tibia relative to the femur will also stretch the ligament and contribute to its tearing.

More to the point, a given amount of anterior tibial subluxation might tear the ligament if the tibia is rotated internally, whereas the same amount of subluxation won’t tear it if the tibia is externally rotated. Accordingly, when performing the pivot-shift test of the ACL (see: https://orthopaedia.com/page/Cruciate-Ligament-Disorders) the tibia is internally rotated. This will tighten the ACL and increase the sensitivity of the test.

On why skiing-related tears of the ACL occur disproportionately after 2pm?

Short answer: Muscles that are fatigued (by a full day of skiing) don’t fire as quickly or contract as strongly as they otherwise would. Weak hamstrings might permit the tibia to subluxate in response to a force that would have been fully resisted earlier in the day.

In reality, this is not quite the case. A given amount of anterior directed force on the tibia (from the mechanism of injury) may or may not tear the ligament, depending on how much resisting force is applied by the hamstrings.

The hamstrings protect the ACL from tearing by countervailing the force that would otherwise exceed the ligament’s strength. The hamstrings (effectively) insert on the posterior tibia, and when the hamstrings contract, they flex the knee joint. (The word ‘effectively’ must be added, as only the semimembranosus itself inserts there. The others insert elsewhere (and the interested student will look that up), but if you were to draw a force-body diagram, the idealized point of attachment is the posterior tibia). 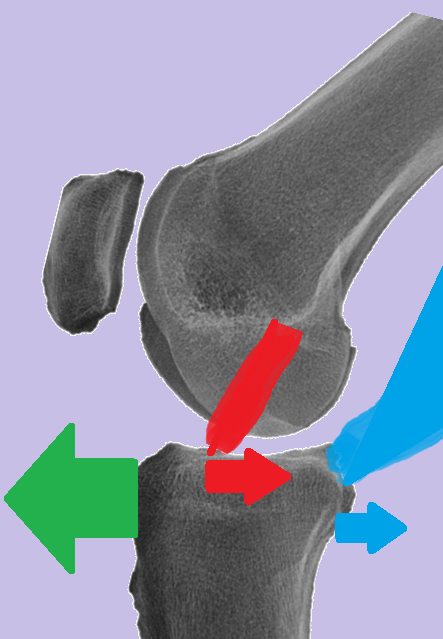 Figure 4: sagittal view of the knee. A force displacing the tibia forward (anterior) is shown by the green arrow. This force is resisted by the ACL (red) and the hamstrings (blue). If the hamstrings are weak, the anterior-directed force may overpower the ACL and tear it.

It is a bit of a simplification to consider only hamstring fatigue. How might fatigue/weakness of hip and abdominal muscles contribute to the risk of an ACL tear?

What is the role of the hamstring tendons when examining the knee for a suspected ACL tear?

What do you think is the role of prior meniscectomy on knee stability?