Stenosing tenosynovitis, also known as “trigger finger,” is a condition in which the flexor tendons of the fingers may get caught within their sheaths thereby limiting movement and causing pain. When the tendons are caught, the finger can get stuck temporarily in a flexed position. When the finger is then forced into full extension, a painful snap or click is felt, hence the name trigger finger. This condition is sometimes known as "stenosing tenosynovitis," as the common lesion seen in all forms of triggering is a relative narrowing (stenosis) of the space for the tendon relative to the size of the tendon itself.

Finger flexion is powered by the flexor digitorum profundus (for the distal interphalangeal, or DIP, joint) and the flexor digitorum superficialis for the proximal interphalangeal (PIP) joint. These tendons travel together in the palm and ascend the fingers through a fibro-osseous canal along each digit (Figure 1). This canal is formed by the metacarpals/phalanges, and by a pulley system and tendon sheath. The pulley system keeps the flexor tendons snug to the bone, preventing “bowstringing” during active flexion and converting a linear force into rotation and torque at the finger joints.

Figure 1: Drawing of the flexor tendons in profile. The tendons are held close to the bone by a system of pulleys (only one of which is shown here in green). If there is a nodule (shown here in red) within the flexor tendon, it might be unable to pass through the pulley. Thus, the finger can get stuck in flexion.

Flexion of the proximal phalanx, particularly with power grip, results in high loads at the distal edge of the most proximal (A1) pulley. The pulleys respond to this load with growth and become hypertrophic. A nodule may develop on the flexor tendon, likely in response to abrasion with the tendon sheath. Hypertrophy or module formation may cause a mismatch between the size of the tendon and the tendon sheath through which the tendon must slide. The mechanical impingement of the flexor tendons as they pass through a narrowed A1 pulley results in the phenomenon of trigger finger. The flexor mechanism in the hand is usually strong enough to overcome the narrowed tendon sheath, but the extensor mechanism generally is not as strong. Hence, the affected finger may become locked in flexion rather than extension.

The term "stenosing tenosynovitis," in particular the -itis suffix, may not accurately reflect the pathophysiology of the condition. There is stenosis, but stenosing tenosynovitis is not an inflammatory condition per se. Inflammation, when seen, is part of the body's correct (but perhaps too exuberant) response to a stimulus.

In children (<2 years of age), triggering most commonly occurs in the thumb and is then known as “trigger thumb.” Congenital trigger thumb typically presents with the thumb interphalangeal joint locked in some flexion and a palpable nodule at the metacarpophalangeal (MCP) flexion crease.

In adults, mild cases of trigger finger can present with a sense of finger stiffness, particularly in the morning. With more advanced cases, patients will commonly present with an initial complaint of painless clicking with finger movement. This can progress to painful locking of the finger in flexion and may require passive manipulation of the digit into extension. Often a painful nodule can be palpated in the palmar MCP area.

Patients with stenosing flexor tenosynovitis without a history of injury or inflammatory arthritis do not need routine radiographs.

Similarly, no laboratory tests are needed to make the diagnosis, but such tests may be helpful for detecting an underlying cause. Test for diabetes, thyroid disorders, and rheumatoid arthritis may be clinically indicated.

This condition occurs most commonly in the fifth and sixth decades of life and has been reported to be up to six times more common in women than in men. Lifetime risk of trigger finger has been shown to be 2-3% but increases up to 10% in diabetics. The ring finger and thumb are the most commonly affected digits followed by the long, index, and then small. The dominant hand is most commonly affected.

The classic presentation of a painful click with forced extension of the fingers, with a palpable nodule probably does not have a true "differential diagnosis." That is, when a tender nodule impeding passive extension is palpated by the examiner, there is no mistaking this condition for something else.

If the presentation is not classic, other conditions may be considered. Dupuytren’s disease can present with fixed contracture of the finger, as can a contracture of the joint capsule itself. A loose body in the MCP joint or an articular irregularity may cause a mechanical blockage. Failure of the extensor mechanism will also cause the finger to be held in flexion (as the flexors are unopposed). Extensor failure is distinguished from trigger finger, as in that case gentle passive correction is unimpeded. Irritation of the sesamoid bones (e.g., sesamoiditis) can mimic the painful sensation of trigger thumb.

It is also possible that reported triggering is a manifestation of psychiatric disease.

Secondary trigger finger can be seen in patients with collagen vascular disorders and inflammatory disorders including rheumatoid arthritis, amyloidosis, gout, diabetes, hypothyroidism, and sarcoidosis and is associated with a worse prognosis after treatment. 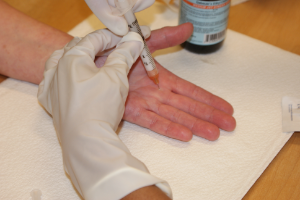 Corticosteroid injections (Figure 2) are placed into the tendon sheath at the level of the A1 pulley. If an injection does not cure the problem, a second or even third injection may be tried before deeming this approach a failure. Possible side effects include fat necrosis, skin hypopigmentation and, rarely, tendon rupture.

Most patients do well with non-operative measures. For those who do not, surgery can be performed to release the A1 pulley. An alternative, and less invasive, method is percutaneous release of the pulley with the use of a needle. This needle method, though, has a higher risk of digital nerve injury in the thumb and is thought to have a higher risk of incomplete release of the pulley.

The success rates of open surgical release has been shown to be greater than 90%. The complication rates are low (3% in some studies). Possible complications include nerve injury, bowstringing, scar formation, and continued pain.

In children less than 6 months old, 30% of trigger thumbs will resolve spontaneously. After 6 months of age, spontaneous resolution is decreased to nearly 10% and surgical intervention with release of the A1 pulley may be indicated.

There is a higher risk of development of trigger finger in patients with diabetes, hypothyroidism, gout, sarcoidosis, rheumatoid arthritis, and amyloidosis. There are no data on prevention methods in general, or those steps that could prevent a nascent case from worsening. (The latter, especially, would be particularly helpful.)

A cross-sectional study of 665 workers at a meat-packing plant found that the person-year incidence rate of trigger finger was more than five-fold higher among those workers with repetitive tool use compared to non-tool use workers. This suggests that trigger finger may indeed be a work-related condition.

In guitar players, standard release of the A1 pulley for trigger finger may interfere with the fine control of the fingertip when the finger is held in extreme flexion.

Recognize the clinical features of trigger finger and the treatment options.