Tendon Disorders of the Hip and Thigh

The hip is surrounded by powerful muscles; disorders of these muscles and their associated tendons and bursas are frequently seen in athletes. The muscles usually affected include the hamstrings posteriorly; the adductor muscles of the medial thigh; the muscles that cross the anterior aspect of the hip and flex it, notably, the iliopsoas; and on the lateral side, the gluteus medius and minimus (with its associated trochanteric bursa) and tensor fascia lata (and its broad expansion into the iliotibial band). These muscles are important not only for moving the hip but also for stabilizing the pelvis, and thus, once injured, can produce symptoms even with minimal activity. Happily, most disorders of the muscles, tendons and bursas around the hip are self-limited and resolve with rest and other mild treatments.

In this section, the following tendon-related disorders will be considered:

The hamstrings (Figure 1) comprise three muscles, originating, for the most part, from the ischial tuberosity. (The exception is the short head of the biceps, which originates from the posterior aspect of the proximal femur.) Two of the hamstrings are medial, the semitendinosus and semimembranosus, and insert on the tibia; the biceps femoris is lateral and inserts on the fibula. The hamstrings extend the hip and flex the knee. They also a have small rotatory effect on the lower leg. The hamstrings also decelerate knee extension and assist the anterior cruciate ligament to help prevent anterior tibial subluxation. 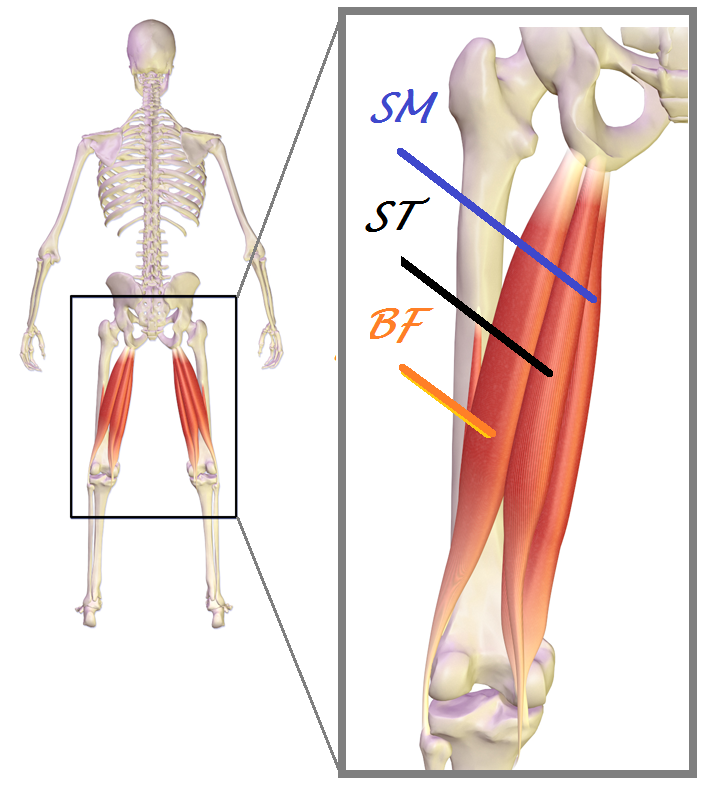 Injuries of the hamstring range from strains of the muscle (also known as a “pulled hamstring”) to complete tears within the muscle or avulsion of the tendon from its origin on the ischium.

The hamstring muscle-tendon unit is injured when it is exposed to forces beyond the tolerance of the tissue. Often this force is applied during so-called "eccentric contraction”. The term "eccentric" acknowledges that the muscle is actually being elongated, despite its attempt to "contract". (Weightlifters call this "negative work.") Eccentric contraction of the hamstrings is seen during running. With each step, the quadriceps swings the leg forward, by flexing the hip and extending the knee. This motion passively stretches the hamstrings. Yet as the leg swings forward, the hamstrings contract eccentrically to decelerate the hip flexion and knee extension. Indeed, the greatest force is applied when the hamstrings are at their maximal length. At this point, the muscle-tendon unit is particularly susceptible to injury.

The hamstrings are the most commonly injured hip/thigh muscle group. People with less flexibility or excessively strong quadriceps muscles (creating imbalance) are more vulnerable to injury.

Acute hamstring injuries are characterized by a sudden, sharp pain in the thigh, with swelling and/or ecchymosis (bluish discoloration of the skin from extravasation of blood) appearing over the next few hours (Figure 2). 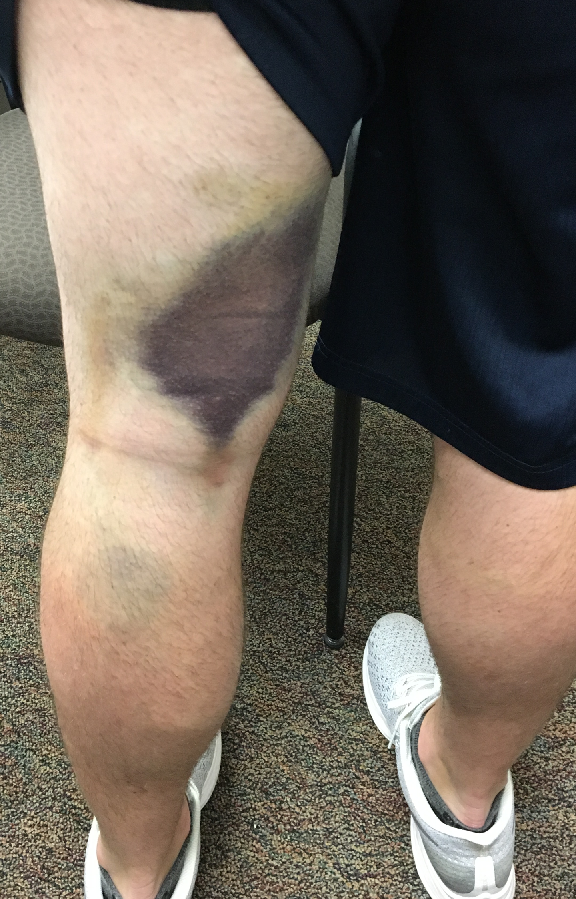 Because of pain or actual tissue failure, there will be weakness that may cause the injured athlete to fall or stumble when the injury is sustained.

The mainstay of the physical examination is tenderness over the affected area, with a characteristic short arc gait (to minimize tension on the hamstrings). If there is a myotendinous rupture, a mass may be palpable in the middle third of the posterior thigh.

X-rays may be obtained routinely, but are specifically indicated if there is a suspected tendon avulsion. Magnetic Resonance Imaging may be helpful to determine the extent of the injury.

Most hamstring strains heal with rest, followed by a course of physical therapy to restore range of motion and strength. Surgery is reserved for bony avulsion injuries or large tears when the tendon has retracted more than 2 cm.

Note that lumbar spondylolisthesis (in which a vertebra slips forward relative to an adjacent one) could present with hamstring pain and tightness.

There are three named adductor muscles (adductor longus, adductor magnus and adductor brevis) and three other muscles (gracilis, obturator externus and pectineus) that adduct the hip. Of these, the adductor longus (Figure 3) is the most commonly injured muscle. 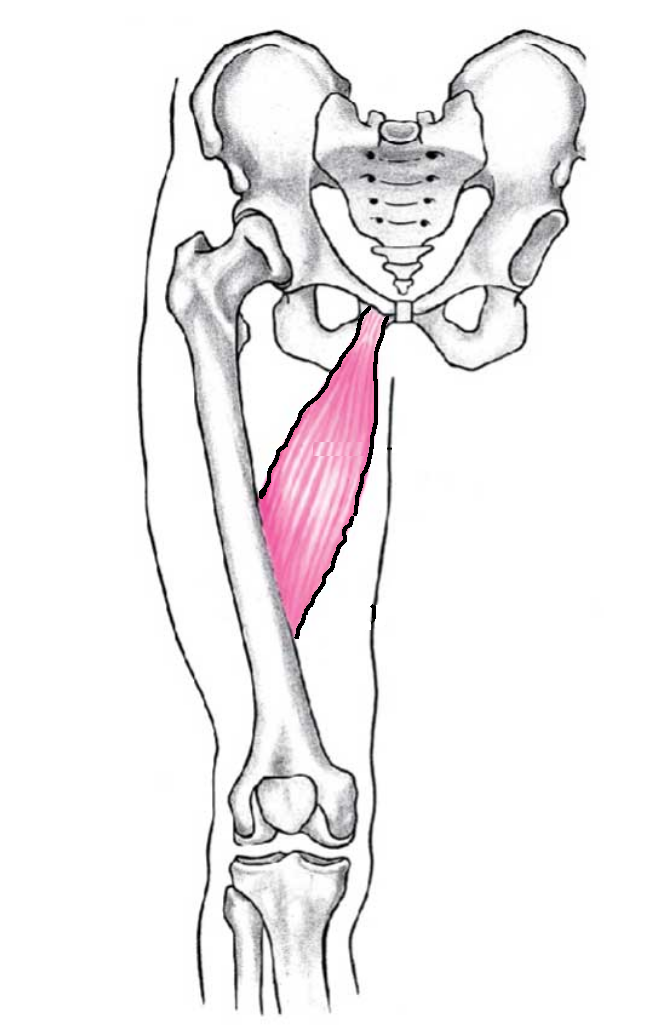 Patients with adductor strains present with immediate and severe groin pain, with tenderness often extending above and below the site of injury. There will be pain with passive abduction, and decreased strength on adduction compared to the other leg.

In general, strains of the adductor muscle are acute events. Sub-acute or chronic complaints may suggest a non-musculoskeletal cause for the groin pain including hernias and disorders of the urogenital system.

AP pelvis x-rays may show a fleck of bone, but in general, imaging is used not so much to confirm this diagnosis, but to rule out other causes of groin pain such as osteitis pubis, avulsion fractures or stress fractures.

Rest, followed by a course of physical therapy to restore range of motion and strength, is the preferred treatment; there are no indications for surgery. Unfortunately, groin strains may recur; patients should be counseled against returning to sports too quickly and encouraged to warm up and stretch adequately before activities.

The gluteus medius and minimus originate in the ileum and insert on the greater trochanter of the femur. Their primary function is hip abduction, notably resisting hip adduction when standing on one leg. (When standing on one leg, the body’s center of gravity is medial to the hip joint, such that without resistance, the hip joint would passively adduct, causing the pelvis to tilt. Isometric hip abduction force by the glutei keep the pelvis level. Indeed, dysfunction of the glutei is the basis of so-called Trendelenburg gait, in which a patient lurches to the weakened side to maintain a level pelvis, on average, throughout the gait cycle.)

Tendinopathy of the gluteus medius and minimus, along with inflammation of the bursa near their insertion on the trochanter, is a common source of lateral hip pain (Figure 4). 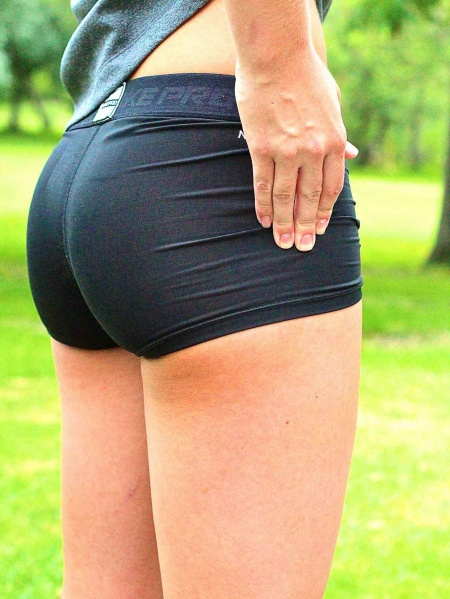 Because tendinopathy and bursitis coexist, the term “greater trochanteric pain syndrome” may be preferable.

Among people age 50 to 70 years, greater trochanteric pain syndrome is found in ~15% of females and ~5% of males.

The most common examination finding is tenderness to palpation of the greater trochanter; there is no objective criterion for the diagnosis.

The treatment of greater trochanteric pain syndrome is non-operative. Pain relief medication (including NSAIDs, on the assumption that chronic tendinopathy contributes to the symptoms) along with physical therapy and corticosteroid injection have been used. Yet because many patients will have resolution of their symptoms even without treatment, it is unclear what is most effective. Conditions that do not resolve may be treated with low-energy extracorporeal shock wave therapy. Platelet-rich plasma injections have been proposed to treat tendinopathies, however reliable evidence of efficacy is not yet in hand.

Trochanteric bursectomy with or without tendon lengthening may also be tried for patients who do not respond to non-operative management.

The iliopsoas is the confluence of psoas and the iliacus muscles. These have separate origins in the abdomen but attach as one on the lesser trochanter (Figure 5). It is the strongest flexor of the hip. 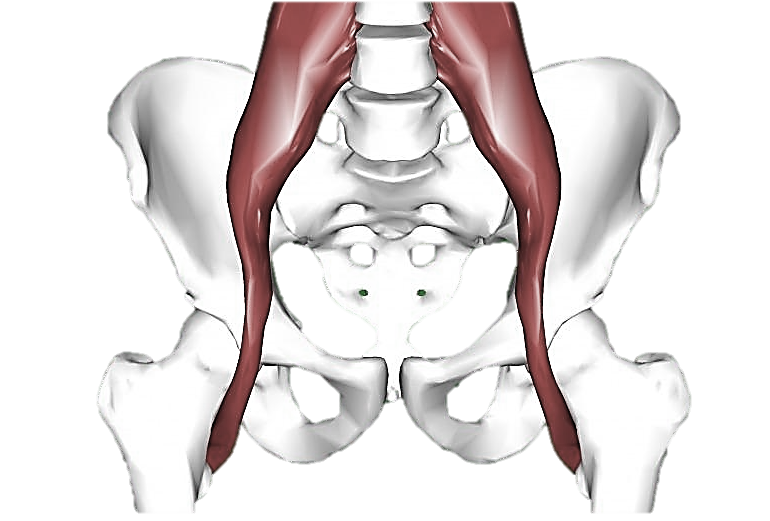 Figure 5: The course of the iliopsoas over the hip joint (modified from https://en.wikipedia.org/wiki/Iliacus_muscle)

The tensor fascia lata originates from anterior superior iliac spine and attaches into the iliotibial band in the upper thigh. The iliotibial band then inserts on Gerdy's tubercle on the proximal lateral tibia (Figure 6). 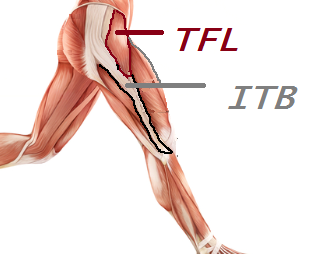 Figure 6: The course of the tensor fascia lata (TFL) and iliotibial band (ITB) on the lateral thigh (modified from https://www.physio-pedia.com/File:Itbs.png)

The tensor fasciae lata can actively move the hip and knee joints, but its main function is to resist the forces of other muscles and thereby stabilize the lower extremity during gait.

Snapping hip syndrome is the term applied to the snapping sensation a patient may perceive when the hip is flexed and extended. This sensation may be perceived via either a sound or mechanical pop.

The snap usually has an extra-articular (muscular) cause. When the sensation is perceived laterally, snapping hip syndrome is caused by the tensor fasciae lata, or gluteus medius tendon sliding across the greater trochanter of the femur. When the snapping is medial, the cause is likely to be the iliopsoas tendon catching on a process of the pelvis or the lesser trochanter of the femur.

Snapping hip syndrome of an extra-articular cause is usually painless, though friction may lead to a local bursitis.

Snapping of the hip could be due to intra-articular pathology, such as a labral tear. This version is more often symptomatic and the “snap” is more of a “click”. Here, pain is more common.

Snapping hip is most common in athletes and dancers in their teens.

On exam, snapping of the hip due to the iliopsoas tendon sliding over the femoral head can be reproduced by passively extending and internally rotating the hip from a flexed and externally rotated position.

Painless snapping should be treated with reassurance only. Pain from bursitis may be treated with a short course of rest and stretching. Should that not work, injections may help. In the most refractory cases, surgical release of the contracted tissue may be indicated.

As noted, the tensor fascia lata originates from the pelvis but inserts in the tibia. It may be the source of distal thigh or knee pain accordingly. The function of the tensor fasciae lata at the knee is unusual in that depending on the position of the knee, it is either a flexor or extensor. If the knee is flexed already, the iliotibial band is behind the center of rotation and thus helps flex the knee even more, but in a position close to terminal knee extension, its line of pull is anterior and thus extends the knee. Because the iliotibial band contacts the distal lateral femur when the knee is in motion, it is subject to irritation and inflammation. This is termed iliotibial band syndrome.

Patients with iliotibial band syndrome present with activity-related lateral knee pain of insidious onset, localized to the contact point of the lateral femoral epicondyle and the iliotibial band as it courses distally to the knee. To confirm on physical exam, the patient is placed in a lateral decubitus position (affected side up) with the hip slightly flexed and the examiner passively flexes the knee. If pain is produced only with compression of the iliotibial band, this test is considered positive.

Because Iliotibial band syndrome may be present in 10-25% of runners, and is essentially not found among those who do not run, it is considered a classic overuse syndrome. The logical treatment is thus under-use, that is, relative rest.

Identify the hip muscle(s) responsible for symptoms. Demonstrate stretching exercises for tight hip muscles. Prepare veal saltimbocca for a party of 6, to be accompanied by a nice chianti.