Tendon Disorders of the Foot and Ankle

Important tendons cross the anterior, medial and lateral aspects of the ankle. These include, respectively, the tibialis anterior; the tibialis posterior; and the pair of peroneal tendons (peroneus longus and brevis). Due to their important roles during gait, each of these tendons may be subject to overuse and inflammation. When symptoms of inflammation are present, the clinical diagnosis of tendonitis may apply. The large Achilles tendon runs posterior to the ankle and inserts into the calcaneus. It may be affected by a number of clinical conditions that are reviewed in chapter 8 (Achilles tendon disorders) and chapter 14 (Achilles tendon rupture).

The terminology of tendon disorders may be confusing. (Indeed, the first hit on Google for the term “tendonitis” takes you to a site about “tendinitis.”) Although it is certainly acceptable to use “Tendinopathy” as an all-encompassing term denoting a disease of a tendon, it may be helpful to think of three distinct disorders:

Tendonitis, also known as Tendinitis, refers to a painful clinical condition where there is acute pain and swelling due to microtearing of the tendon and the resulting inflammatory response.

Tendonosis (or tendinosis) is a chronic degenerative condition in which repetitive overuse and aging leads to a non-inflammatory degeneration of the tendon’s collagen over time.

Paratenonitis is an inflammation of the lining of the thin lining of connective tissue that surrounds many tendons allowing the tendon to glide more easily, namely the paratenon.

In a nutshell, you must ask: is the problem an acute inflammatory problem, or is this a degenerative condition? Or is the problem extrinsic to the tendon altogether?

Note that it can be difficult at times to differentiate clinically between these three conditions. Many cases of acute inflammatory tendonitis occur in the setting of underlying degenerative changes within the tissue. Therefore, while the term tendonitis will be used broadly in this chapter, it should be kept in mind that the described condition may not be tendonitis, per see.

The tibialis anterior muscle is the most medial muscle of the anterior compartment of the leg (Figure 1). It stabilizes the ankle as the foot hits the ground during the contact phase of walking and dorsiflexes the ankle to help the foot clear the ground during the swing phase. It also provides half of the force needed to 'lock' the ankle, as would be needed to kick a ball, for example: by providing an isometric contraction against its antagonists, the soleus and gastrocnemius, the tibio-talar joint is held in a fixed position.

The tibialis posterior muscle belly originates on the posterior aspects of the tibia and fibula and the tendon crosses behind the medial malleolus to insert primarily on the navicular (Figure 2). It actively inverts the foot and also plantar flexes the ankle, but its primary role is to support the medial arch of the foot. Contraction of the tibialis posterior locks the joints of the midfoot during gait progression to create a rigid lever in the foot. Therefore, rupture or even stretching of this tendon can lead to flat feet.

The peroneus longus and brevis muscle bellies originate on the fibula and the tendons course together along the bone, with the brevis medial to the longus (Figure 3). They cross the ankle behind the lateral malleolus, in a groove covered by the superior peroneal retinaculum. The peroneus longus tendon then continues in a plantar direction along the sole of the foot to the base of the first metatarsal bone. The peroneus brevis tendon inserts into a tuberosity at the base of the fifth metatarsal bone, on its lateral side. The peroneus muscles plantarflex and everts the foot. 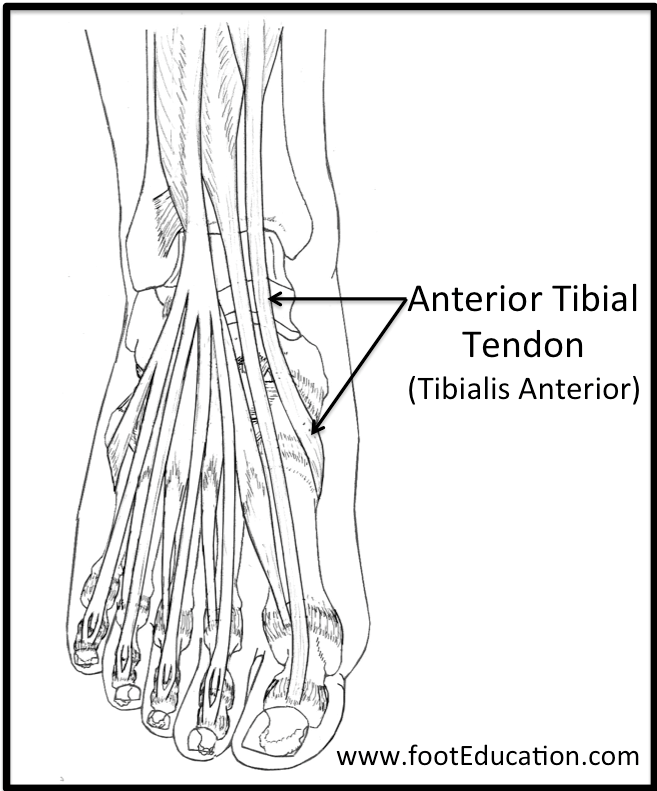 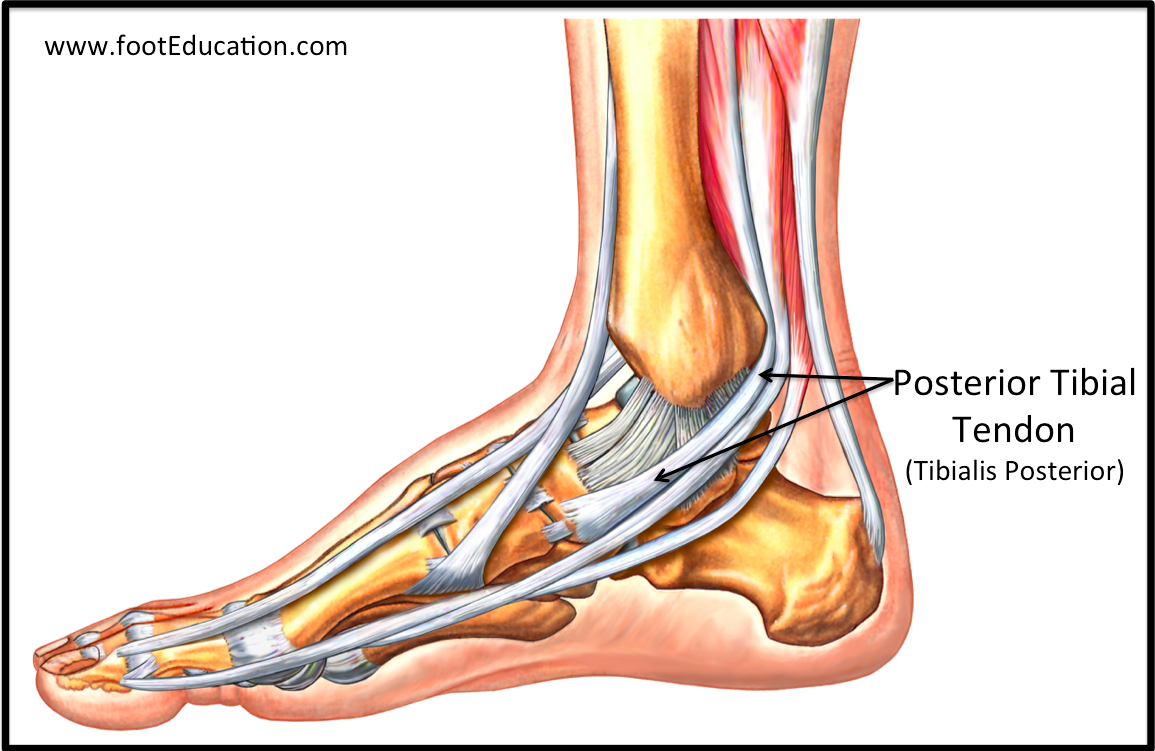 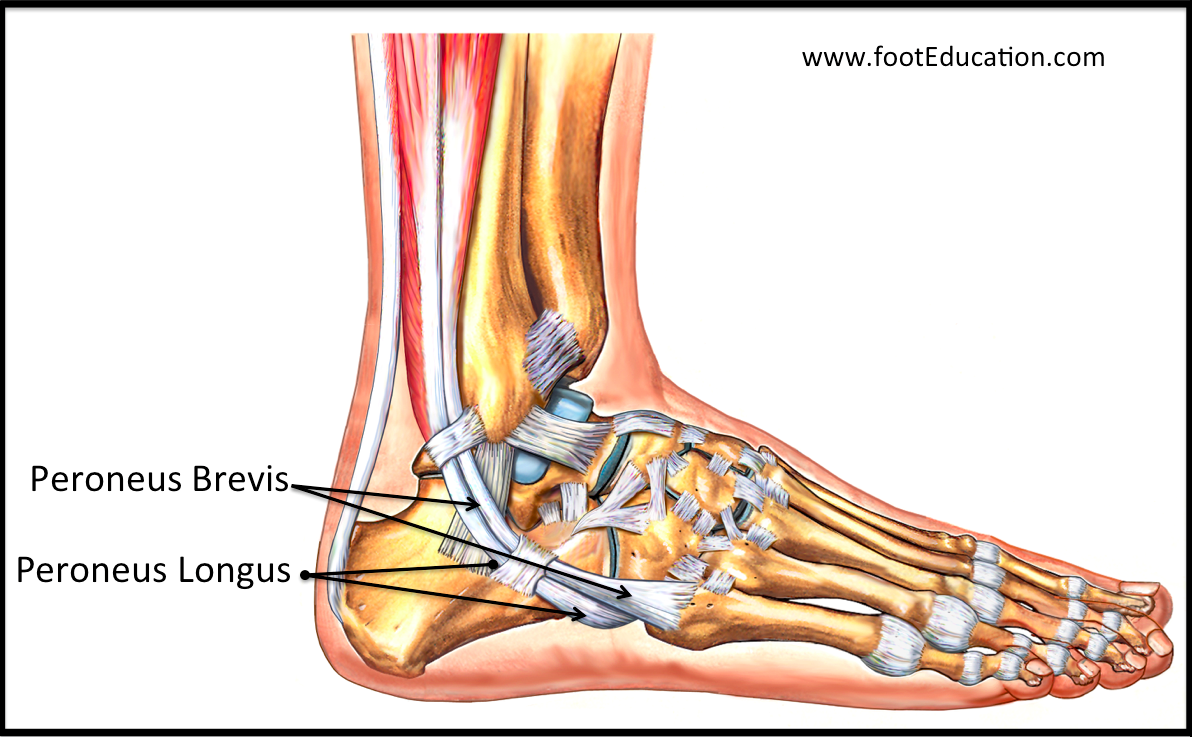 Figure 3: Tendons of the Peroneus Longus and Brevis

Tibialis Anterior tendonitis leads to pain and often swelling in the front of the ankle and into the medial midfoot (Figure 4). Symptoms typically occur in middle aged and older individuals. They often occur after prolonged exercise or ankle injury, and can be related to change in activity levels or footwear. Symptoms are aggravated by standing and walking and alleviated by rest. Examination will often reveal tenderness and sometimes swelling over the anterior aspect of the ankle. Resisted dorsiflexion of the ankle against the examiner’s hand will often exacerbate symptoms.

Tibialis Posterior tendonitis presents as medial ankle and arch pain, worsened with prolonged standing and often in conjunction with a flat foot and prominent navicular bone on the medial aspect of the foot. Pain with resisted inversion and tenderness along the course of the tendon to its insertion on the navicular are hallmarks of this condition. If there is tenderness at the insertion but not along the course of the tendon, a symptomatic accessory navicular may be present. This can be confirmed with a radiograph.

The integrity of the Tibialis Posterior can be assessed with a single leg heel rise; having the patient stand up on the ball of the foot, with the contralateral foot off the ground entirely (that is, in a stork position). When viewed from behind, the intact tendon will be seen to invert the ankle and heel. A lack of this motion suggests tendon dysfunction or failure. Note: that if the contralateral foot is kept on the ground and helps the patient stand on his or her toes, that assistance might prevent the tested tibialis posterior from generating enough force to invert the ankle, and the test can be falsely negative. Note also that some patients with severe tendonopathy may simply be unable to stand on one leg at all. This can be related to pain, weakness, or a combination of the two.

Patients with peroneal tendonitis present with pain and, occasionally, swelling near the posterolateral ankle (Figure 5). Resisted eversion will produce pain. Concomitant sural nerve irritation (by inflamed or damaged tendon) can lead to either decreased sensation or a burning over the lateral or outside aspect of the foot. There may be pain at the insertion of the brevis on the metatarsal, and if there was an acute event precipitating the pain, an x-ray should be obtained to exclude a bone injury.

With an injury to the retinaculum, the peroneal tendons may be free to slip in and out of their normal position behind the fibula bone at the level of the ankle joint. This condition is known as chronic subluxating peroneal tendonitis. Patients with this condition might describe a snapping sensation with activity; the subluxation can at times be reproduced on physical exam.

Figure 4: Location of pain and swelling in tibialis anterior tendonitis 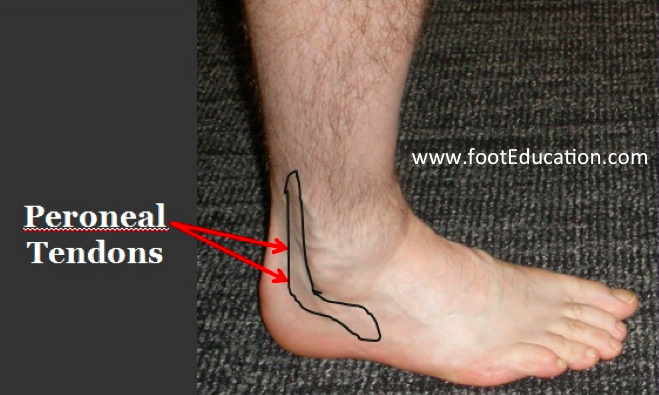 Figure 5: Location of pain and swelling in peroneal tendonitis

Suspected tibialis anterior tendonitis can be evaluated with plain x-rays of the foot and ankle which might reveal bone injury or arthrosis in the ankle or midfoot joints.

Posterior tibial tendon disorders may be studied with weight-bearing x-rays of the foot to assess the extent of the flatfoot deformity, if any. Plain x-rays may also reveal an accessory navicular or a tarsal coalition. MRI can show damage to the tendon, injury to ankle ligaments, and identify arthrosis in the joints of the hindfoot.

In the case of suspected peroneal tendonitis, plain weight-bearing x-rays are likely to show evidence of a high arched foot pattern, but the main goal of radiographs is to exclude a fracture of the fifth metatarsal, bony prominences that can irritate the tendons or lateral ankle arthrosis.  An MRI can determine if there is tearing or tenosynovitis of the peroneal tendons.

Although the incidence of ankle tendonitis has not been measured, anecdotal evidence suggests that posterior tibial and peroneal tendonitis are relatively common. Whereas anterior tibial tendonitis is less common, except perhaps in younger athletes who have just increased training regiments or started running up and down hills (PMID: 19912714). Risk factors for peroneal tendon problems include a high arch foot with an inward (varus) heel and can occur at any age. Tibialis posterior problems are associated with a flatfoot deformity and more commonly occur in patients in their 40s and 50s

Anterior ankle pain, similar to that of tendonitis, is more commonly caused by ankle arthritis or anterior ankle impingement.

Lateral ankle pain may be caused by ankle sprains, sural nerve irritation, fracture of the anterior process of the calcaneus, or fracture of the base of the fifth metatarsal (e.g., Jones fracture). Radiographs can also demonstrate a calcification within the peroneus longus tendon called “painful os peroneum syndrome” or POPS.

Medial ankle pain near the posterior tibialis can be due to an accessory navicular, spring ligament injury, or medial malleolar stress fracture. Posterior tibial dysfunction can be seen in rheumatoid arthritis.

Pain along the course of the tibialis posterior may suggest attritional tearing of the tendon. This should be detected and treated before the tendon ruptures, which could cause an acquired flatfoot. Persistent tenderness on the lateral aspect of the ankle can be related to fractures of the anterior process of the calcaneus, base of fifth metatarsal, or cuboid. Radiographs can help rule these out.

In patients with posterior tendon dysfunction and an associated flatfoot deformity (acquired adult flatfoot deformity), it may be necessary to perform some type of a flatfoot reconstruction if non-operative treatment fails. This usually includes a transfer of another tendon (usually the flexor digitorum longus) to support the arch combined with a bony procedure, such as a medializing calcaneal osteotomy, to address the associated foot deformity. Removing an accessory navicular and reattaching the tendon (Kidner procedure) may be necessary in patients with a painful recalcitrant accessory navicular.

In patients with a large peroneal tendon tear or a bony prominence that abrades the tendon, surgical repair with resection of the irritant may be beneficial. A small peroneal tendon tear that does not respond to non-operative treatment may also benefit from debrided and repaired.

Risk factors for peroneal tendonitis include overuse and a high arched foot. An orthotic with a lateral heel post and a recessed area under the first metatarsal head may be useful if a patient has a cavus (high arched) foot pattern.

Rheumatoid conditions predispose to joint capsular laxity and tendon attenuation and may cause posterior tendon dysfunction.

Patients with Charcot-Marie-Tooth disease, an inherited neuromuscular disorder, have asymmetrical residual weakness of the foot and ankle muscles, with the peroneus longus attaching to the base of the first metatarsal, relatively spared. The unopposed pull of this muscle against its weakened natural antagonist (tibialis anterior) causes the classic deformity of marked cavus (high arches), as shown in Figure 6.

Figure 6: The unopposed pull of the peroneus longus causes the classic deformity of Charcot-Marie-Tooth disease, namely, marked cavus of the foot.

Identify the surface anatomy of the tendons themselves, as well as the navicular, 5th metatarsal, and lateral retinaculum. Perform resistance tests for each tendon to determine strength, function, and pain that may be related to tendon injury or other pathology. Perform and interpret the single leg heel rise test. Recognize an incipient posterior tendon rupture. Identify fractures and other disorders on radiographic images