The triangular fibrocartilage complex (TFCC) is a soft tissue structure covering the distal ulna at the wrist, which serves to help stabilize the wrist and transmit load across the wrist joint. Because of its anatomic complexity and the forces that it experiences, the TFCC is at risk for both direct injury and degenerative damage. As such, TFCC pathology is a common cause of ulnar sided wrist pain.

The TFCC is located at the ulnar wrist, articulating with the head of the ulna proximally and the lunate and triquetrum distally.

The TFCC can be divided into three components (Figure 1): 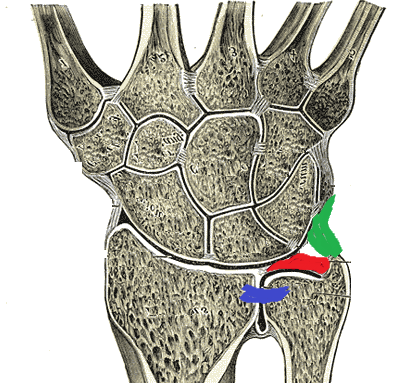 Figure 1: Drawing from Gray's Anatomy, showing the normal TFCC in situ: the triangular fibrocartilage disc is shown in red; the ulnocarpal ligament complex is in green and the radio-ulnar ligament in blue. (modified from wikipedia http://bit.ly/1Q7URwP)

The radio-ulnar ligaments are the primary stabilizers of the distal radioulnar joint.

The ulnocarpal ligament complex prevents dorsal migration of the distal ulna relative to the lunate and triquetrum, to which it attaches.

The vascular supply of the TFCC is limited to the peripheral 10-40% of the volar, ulnar, and dorsal TFCC only. The relative hypovascular nature of the central portion of the TFCC precludes healing of injury in this region, and may necessitate surgical excision.

Acute injuries of the TFCC result from axial and torsional forces applied to the extended wrist: in short, most often from falling on an outstretched hand. (Falling On an OutStretched Hand is a common mechanism for a variety of injuries and goes by the acronym FOOSH.)

Failure of the TFCC may be found in association with a distal radius fracture (which also comes about from force applied to the extended wrist).

Patients with TFCC injuries may present with chronic complaints of ulnar-sided wrist pain. Often, symptoms are aggravated with axial loading, particularly with the wrist in extension, or torsional activities against resistance such as wringing out a washcloth or turning a screwdriver. With progression, even simple activities such as pouring water from a pitcher may cause pain.

Pain or tenderness is localized to the ulnocarpal joint and may be provoked with ulnar impaction testing, or loading through an extended wrist such as with pushing oneself up from a chair. Patients can also complain of pain in the ulnar wrist in supinated and/or pronated positions.

Gross instability of the DRUJ may be recognized with stress testing of the DRUJ in positions of maximal pronation and supination.

For patients with a suspected TFCC injury, advanced imaging studies may be useful in assessment of the ulnar wrist.

Plain radiographs can show the congruity of the DRUJ and allow measurement of the ulnar variance (Figure 2). (See “risk factors,” below.) 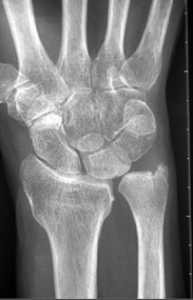 Arthrography, or, better still, an MRI (or MR-arthrogram) may help detect ulnar wrist pathology. The sensitivity and specificity for detecting a full-thickness TFCC tear are approximately 85% and 95%, respectively, for MR-arthrography.

The gold standard for assessing the integrity of the TFCC is arthroscopy. This is an invasive test requiring anesthesia.

Attritional tears or degenerative pathology involving the TFCC are common, with a reported incidence of tears in greater than 50% of those over the age of 60 years. (Such chronic alterations in TFCC may become symptomatic after minor wrist trauma. On the other hand, the high prevalence of asymptomatic morphological change within the TFCC makes it unwise to necessarily attribute ulnar-sided wrist pain to a structural abnormality seen on an imaging study.)

It is estimated that TFCC injury occurs in up to 80% of displaced distal radius fractures.

Intrinsic causes of ulnar wrist pain which might mimic symptoms associated with a TFCC include:

Extrinsic causes include cervical radiculopathy, ulnar neuropathy at the elbow, tendinopathy of either the extensor or flexor carpi ulnaris. Rarely, a nerve tumor (schwannoma) or ulnar artery thrombosis is the cause.

Acute traumatic injury to the wrist requires a full evaluation, including the elbow. Although chronic ulnar-sided wrist pain does not have any “red flags” per se, the failure to examine and image "one joint above and one joint below” the focal area of complaints can lead to a misdiagnosis.

Management of TFCC pathology should be guided primarily by the severity of symptoms. Other important considerations include the acuity and the location of the injury, and the response to initial treatment.

Most injuries of the TFCC may be treated non-operatively: activity modification, immobilization, and analgesics are the first lines of treatment. Immobilization is typically done above the elbow with limitation of pronation/supination of the wrist, i.e., long arm removable splint or Munster cast.

For persistent symptoms, corticosteroid injection of the ulnocarpal joint or therapeutic modalities may be considered.

Occasionally, when arthroscopic debridement does not provide adequate resolution of symptoms, an ulnar shortening osteotomy (to create negative ulnar variance and in turn decrease ulnar load) may be needed.

In cases with continued pain and disability despite appropriate treatments, various salvage procedures may be considered, such as joint stabilization, joint unloading or decompression, distal ulna resection, arthrodesis, and arthroplasty.

In a case series report examining open repair to treat triangular fibrocartilage injury, excellent or good results were seen in 26 of 33 patients.

In another report, among 28 patients with TFCC tears who were debrided (and not repaired), excellent results in 13, good in 8, fair in 2, and poor in 5 were reported in one study. The authors there concluded that arthroscopic debridement of TFCC tears is “warranted.”

The term “conservative treatment” should not be used synonymously with “non-operative treatment.” There is nothing conservative about deferring surgery for a repairable TFCC tear, especially when such a delay facilitates the transformation of that repairable tear into an irreparable tear.

Some people similarly refer to the “TFCC complex.” This is an instance of the “RAS Syndrome,” a (self-referential) acronym for the Redundant Acronym Syndrome syndrome in which the word denoted by the last letter of an acronym is repeated unnecessarily. Other examples include “ATM machine” or “HIV virus.”