Spinal muscular atrophy is a disease of progressive muscle wasting and motor weakness. In spinal muscular atrophy, the alpha motor neurons in the anterior horn of the spinal cord that are responsible for skeletal muscle control deteriorate and are lost over time. Affected individuals are plagued by muscle weakness that progresses in a proximal to distal fashion. As the motor neurons deteriorate, muscle wasting ensues. Three major types exist (Table 1) and differ based on age of onset and clinical severity of symptoms.

Even if the SMN1 gene is not functional, a similar gene, SMN2, found nearby on chromosome 5, can code for the production of some survival motor neuron protein. The SMN2 gene is able to produce only about 10-20% of the normal amount of SMN protein (Figure 1). People ordinarily have 2 to 4 copies of the SMN2 gene. The more copies of SMN2 that affected people have, the more SMN protein they produce and the milder their clinical presentation will be. Nonetheless, even with many copies of the SMN2 gene – and some people have up to 8 – the levels of SMN protein are still below normal if the main SMN1 gene is not functional. 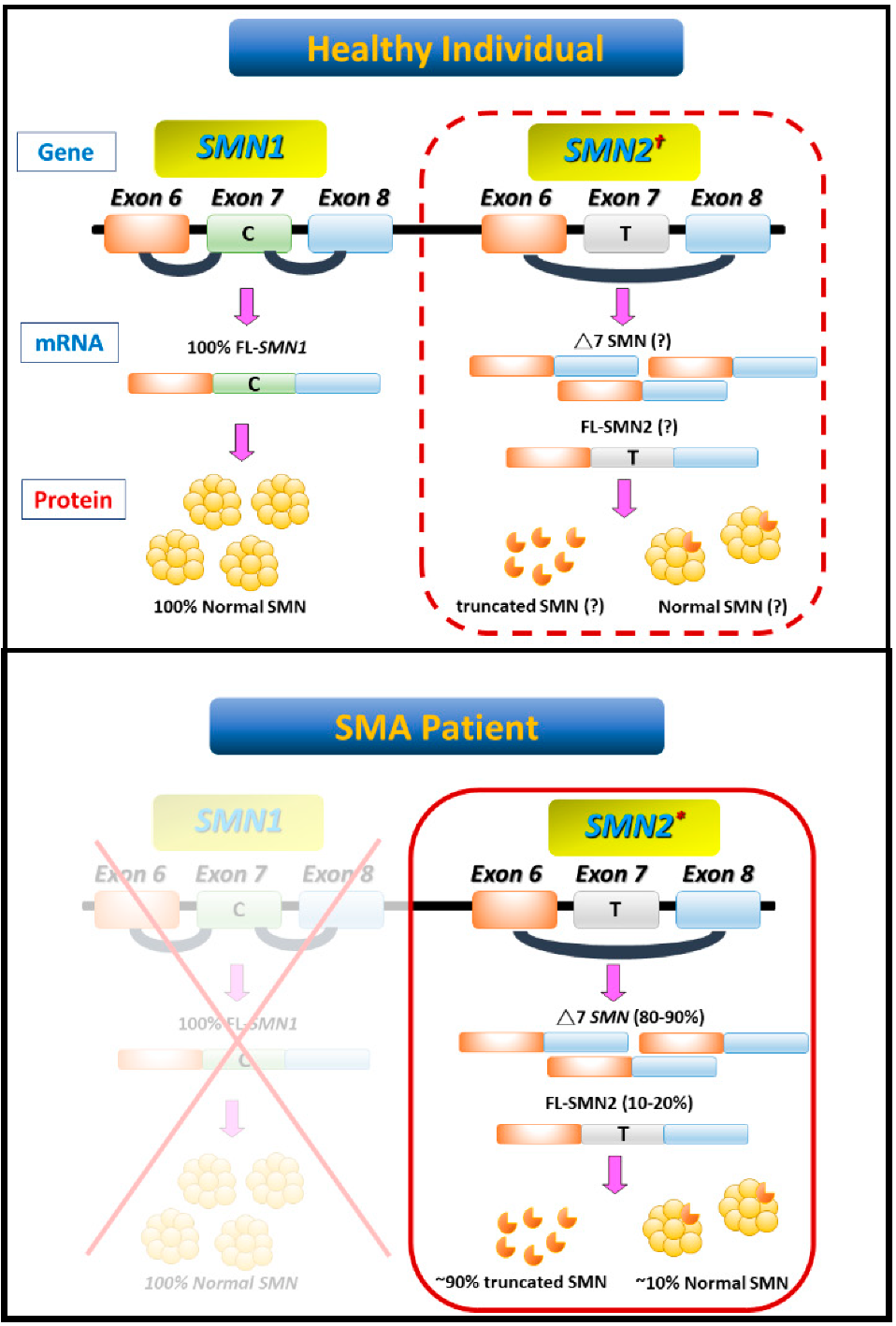 Patients with spinal muscular atrophy type 1 are the most severely affected, with age of onset at birth and rapid progression, often leading to respiratory failure and death within the first two years of life (Figure 2). 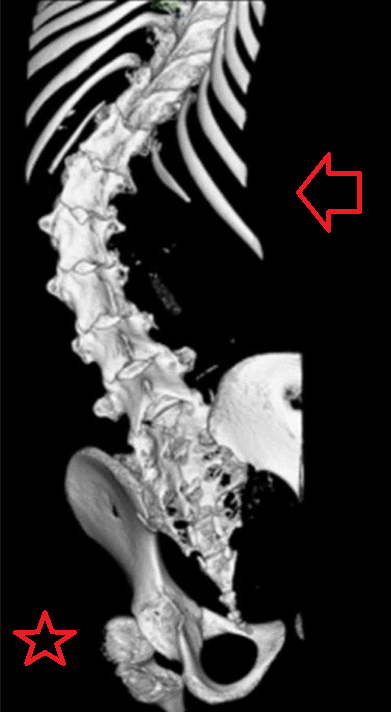 In these patients, deep tendon reflexes are absent, and muscle fasciculations may be seen. The spinal musculature is severely affected, leading to poor trunk control, often termed “floppy baby syndrome.”

Patients with spinal muscular atrophy type 2 present later, between 6-18 months of age, and have a less severe and less rapidly progressive course. The proximal musculature is affected first, and progresses in a distal manner. Almost all patients will develop scoliosis as weakness progresses (Figure 3). The curve pattern is usually typical of a neuromuscular curve, but is often very flexible compared to scoliotic curves seen in other conditions. Soft tissue contractures around the hip, knee, and ankle are common. Hip dislocations (Figure 4) and equinovarus feet are often encountered in these patients as well. Patients usually do not have the ability to stand independently and rely on the use of a wheelchair for mobility. Deep tendon reflexes are absent. 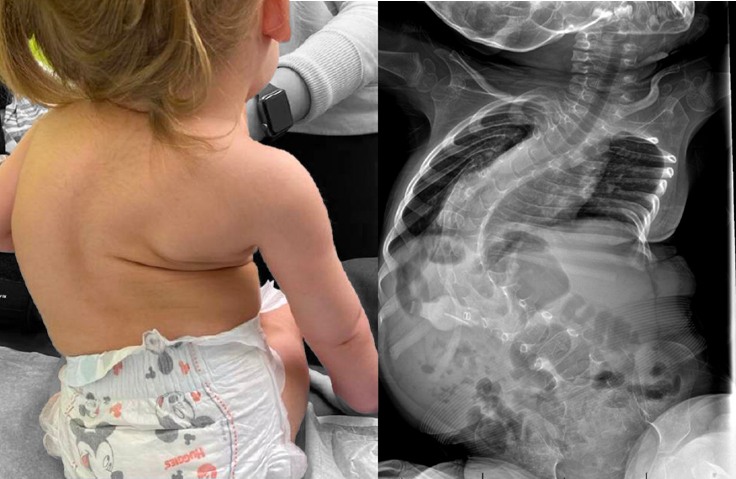 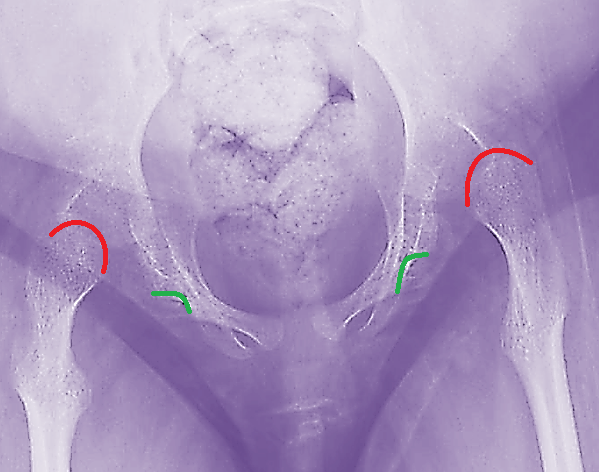 Figure 4: Anteroposterior radiographic view of the pelvis of a patient with spinal muscular atrophy type 2, demonstrating bilateral hip dysplasia and dislocation. (The femoral heads are outlined in red and the approximate location of where the acetabulum should be is noted in green.)

Spinal muscular atrophy type 3 patients are the least severely affected, and symptoms present later, during childhood or early adolescence. These children usually maintain the ability to stand independently but will usually become wheelchair-bound as an adult.

The diagnosis is suspected based on clinical signs and symptoms, but since spinal muscular atrophy is caused by a genetic mutation in the SMN1 gene, DNA analysis confirms the disease.

Radiographs of the affected spine will show the scoliotic deformity, which is usually a long, sweeping curve commonly with associated pelvic obliquity. Hip radiographs reveal dysplasia, signs of acetabular dysplasia ranging from mild uncovering with instability to dislocation. Generalized osteopenia may be present in non-ambulatory patients.

Spinal muscular atrophy, an autosomal recessive genetic disease, is seen in one in 10,000 live births. It is the most common cause of death due to a genetic disease in infants. There is no differential risk based on ethnic group.

Shortness of breath and respiratory distress is a common cause of death in spinal muscular atrophy type 1 infants and may require ventilator support in individuals with type 2 and 3 disease.

Signs of choking and difficulty swallowing is common as the disease progresses, which may require speech therapy support.

Medical treatment of spinal muscular atrophy has evolved over the past few years. Nusinersen, a medication that is injected intrathecally (into the spinal canal such that it reaches the cerebrospinal fluid), has been shown to slow the progression of disease in spinal muscular atrophy patients. Nusinersen acts on the SMN2 gene to modulate the splicing of the RNA transcript, leading to increased production of SMN protein.

In 2019, a gene therapy treatment option was approved in the United States: onasemnogene abeparvovec (Zolgensma). The adenovirus-like vector is given intravenously and contains the SMN1 gene. It is currently approved for patients under 24 months of age.

Ventilator support is a critical aspect of treatment as spinal muscular atrophy patients suffer from respiratory muscle atrophy. Much like patients with muscular dystrophy, nighttime ventilation is often required either via tracheostomy or CPAP/BiPAP.

Patients with spinal muscular atrophy type 2 may develop progressive scoliosis. Bracing is sometimes used in an effort to slow progress but will not halt it. In young patients, often those with curves greater than 50 degrees are treated surgically to prevent respiratory compromise. Since younger patients still have substantial thoracic growth left, surgical strategies often involve placement of some sort of growing rod to allow for support and continued growth of the spine and chest wall. Once the patient reaches adolescence, the spine may be definitively fused with posterior spinal fusion. If scoliosis develops during adolescence, surgical treatment is usually performed for curves greater than 40 degrees, for progressive curves, or when lung function deteriorates.

Treatment of the hip dysplasia in spinal muscular atrophy patients remains controversial. Many advocate for observation, as dislocations tend to be asymptomatic and the recurrence rate after open reduction is higher than for idiopathic hip dislocations. If pain is present, the decision may be made to treat the dislocation surgically, with soft tissue releases and femoral/pelvic osteotomies.

Nusinersen leads to improved muscle function while retarding disease progression. Long-term outcomes of the medication wait to be seen, as the medication has only been approved for use in spinal muscular atrophy patients within the last 4 years.

Because spinal muscular atrophy is inherited in an autosomal recessive manner, if there is no known family history of the disease, parents may be unaware of their carrier status. Accordingly, spinal muscular atrophy was added to the Recommended Uniform Screening Panel for newborns in 2018. (This panel is a list of disorders that the federal government  recommends for states to screen as part of their newborn screening programs.)