Spina bifida (Latin, meaning “spine in two parts”) is caused by a developmental failure of fusion of the vertebral arches, with or without protrusion of the spinal cord (Figure 2). 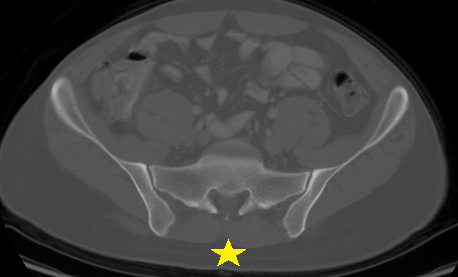 Figure 2: CT scan of the pelvis showing a failure of fusion. As shown (by the star), there is a gap in the posterior aspect of the spinal canal. (Case courtesy of Dr Hani Makky ALSALAM, Radiopaedia.org, rID: 8909)

Spina bifida can occur at any level of the spine, but most lesions are found in the lumbo-sacral region (Figure 3). 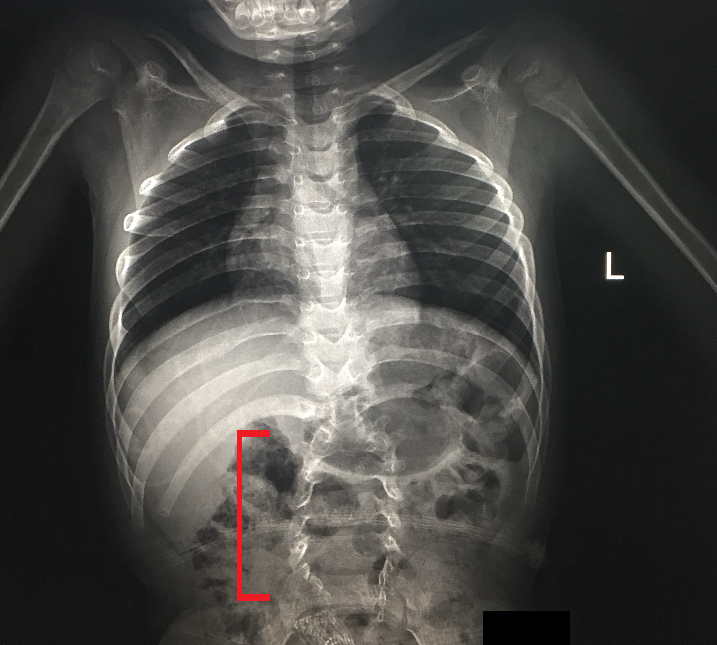 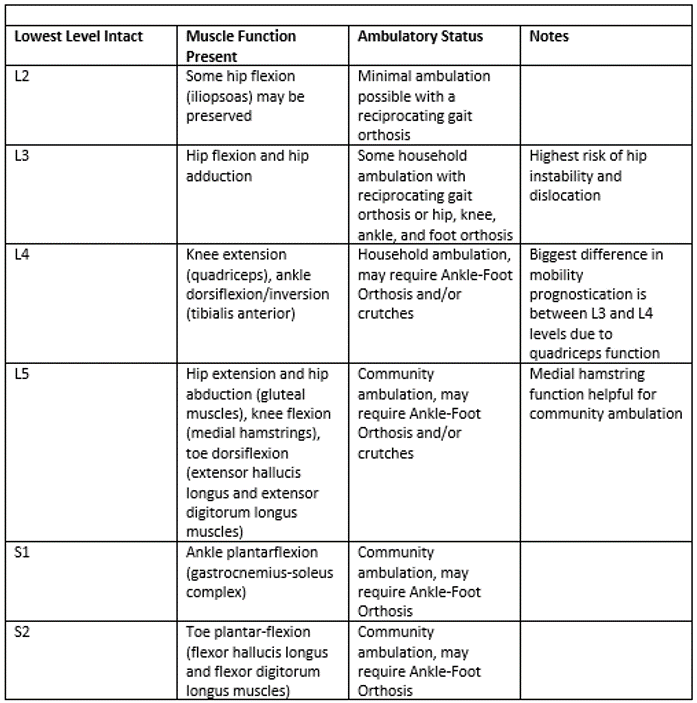 In addition, the more rostral (toward the head) the defect is, the more severe the secondary orthopaedic manifestations, including scoliosis, hip dysplasia, knee contractures, and foot deformities.

The risk of developing scoliosis correlates with the spinal level; those with thoracic lesions develop scoliosis in nearly all cases. Kyphotic deformity may be present and may be very focal in nature – a so-called “Gibbus deformity.”

Flexion and adduction contractures near the hip are common in myelomeningocele patients. Muscles responsible for hip abduction and extension receive innervation largely from L4 and L5 nerve roots, while hip flexors and adductors are innervated by L1-L3 nerve roots. Accordingly, if the patient is functional through the L3 level, the hip flexors and adductors will work while hip extensors and abductors will not. The resulting muscle imbalance leads to hip subluxation, dysplasia and, in extreme cases, posterosuperior dislocation.

Even without dislocation, contractures can cause sitting imbalance and pelvic obliquity. In turn, this can cause pressure sores and skin breakdown.

Various knee deformities can be seen in myelomeningocele patients (Figure 4). Flexion and, less frequently, extension contractures may be seen. Patients with a mid-lumbar functional level often develop knee valgus due to their relative hip abductor weakness. 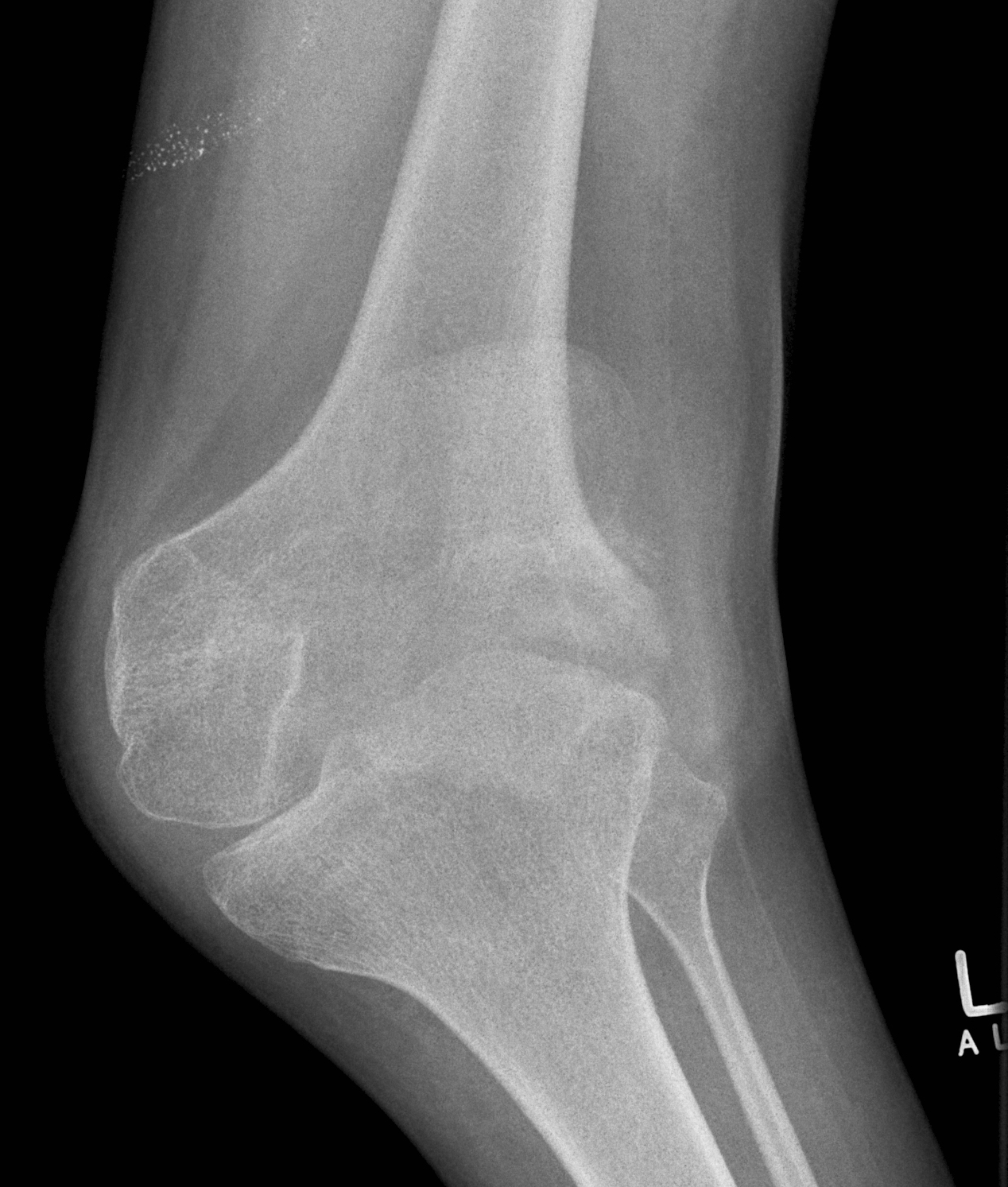 Figure 4: Radiograph of a knee in a patient with a high spinal lesion causing Charcot arthropathy.

Deformity of the foot and ankle is frequently encountered among patients with myelomeningocele. Clubfoot, often bilateral, is the most common of these deformities. Clubfoot caused by myelomeningocele is typically more rigid than that seen in idiopathic clubfoot and therefore less amenable to treatment by casting. Equinovarus, equinus, cavovarus, calcaneal, calcaneovalgus deformities and congenital vertical talus may also be seen.

Conditions such as spinal cord tethering, hydrocephalus, Arnold-Chiari malformation, or syrinx may be present or may develop in the neural axis.

Failure of the neural tube to fuse posteriorly during embryonic development can be caused by genetic and environmental factors. Maternal folate deficiency is a well-known risk factor. From a genetic standpoint, certain chromosomal abnormalities may lead to spina bifida, such as trisomy 13 and 18 (Patau and Edwards syndrome, respectively). Many single gene mutations have also been linked to spina bifida.

Spina bifida may be diagnosed in utero by ultrasound. Myelomeningocele and meningocele may be directly visualized by examining the infant’s back where the lesion is obvious (Figure 5).

Figure 5: Clinical photo of a child with myelomeningocele (A) with corresponding MRI (B). (Image courtesy Bao N, Lazareff J. How I Do It: Management of spina bifida in a hospital in The People's Republic of China. Surg Neurol Int 23-Jul-2015;6)

As the name implies, spina bifida occulta may not be obvious. At times, there is a hairy patch or skin dimpling present. However, the overlying skin will often appear normal. The defect may be directly palpated, revealing lack of midline fusion of the bony posterior spinal elements. Note that most people with spina bifida occulta have no signs or symptoms; it is discovered incidentally when x-rays, CT scans, or MRI studies are obtained for other reasons.

When examining patients with spina bifida, it is good practice to avoid wearing latex gloves as the incidence of latex allergy is high in this cohort of patients.

The scoliosis associated with spina bifida may be progressive, so serial examination is recommended. Progression may be rapid if the scoliosis is in part due to a neural axis abnormality, such as tethering of the cord.

As noted, the combination of osteopenia and lack of sensation increases the risk of pathological fractures. The classic presentation of a fracture associated with myelomeningocele is swelling, erythema, and warmth. These signs may be confused with infection. Thus, in the case of swelling, erythema, and warmth, both infection and fracture must be ruled out.

The skin below a functional level must be checked regularly, as decreased sensation and contractures can lead to abnormal pressure points and ulcers.

A vigilant neurological exam is warranted whenever these patients are seen. As noted, conditions such as spinal cord tethering, hydrocephalus, Arnold-Chiari malformation, or syrinx may be present or may develop in the neural axis. Any change in neurologic exam or suspicion should prompt a neurosurgical referral.

Various lab and imaging studies may be utilized to diagnose spina bifida in utero. Screening is often performed via α-fetoprotein assay of the mother’s serum. To confirm diagnosis, ultrasound may be used to visualize the fetal spine. Amniocentesis may also be employed to confirm a diagnosis, in which α-fetoprotein and acetylcholinesterase levels are measured.

Spina Bifida is the most common major birth defect. About 10-20% of people have spina bifida occulta. The risk of overt spina bifida is ~0.1% in the general population; there is a 5% chance of spina bifida in a given fetus if an older sibling had spina bifida and 40% if two siblings are affected. The incidence of spina bifida varies greatly by region, due to both environmental and racial factors. Caucasians are at a higher risk of giving birth to a child with spina bifida.

Spina bifida is usually diagnosed definitively, and thus there is no true differential diagnoses. Still, it is instructive to consider how the neuromusculoskeletal manifestations in patients with myelomeningocele may overlap with other pediatric conditions.

Clubfoot in myelomeningocele patients may appear identical to idiopathic clubfoot, but is often much more rigid.

Cavovarus feet seen in some patients may appear similar to those who are afflicted with Charcot-Marie-Tooth disease.

The scoliosis and pelvic obliquity can appear similar to curves seen in other neuromuscular conditions, such as cerebral palsy or muscular dystrophy. The focal kyphotic deformity sometimes seen in these patients may appear similar to spinal deformity seen in patients with spinal tuberculosis (Pott’s disease) or MPS I (Hurler syndrome).

There is no cure for spina bifida. The best treatment is prevention (through folate supplementation).

Fetal surgery – to repair myelomeningocele in utero - has shown promise to limit clinical impairments but is “considered experimental” according to the National Institute of Neurological Disorders and Stroke.

The treatment of patients with spina bifida involves the coordination of multiple different specialties, especially for patients with myelomeningocele, to address the complications caused by loss of neurological function.

Physical therapy and orthotics play a major role; depending on the functional level in myelomeningocele patients, braces might be necessary to maintain ambulatory ability. Focused rehabilitation exercises help to prevent formation of contractures. Appropriate fitting for crutches, walkers, or wheelchairs is necessary.

As is the case with other neuromuscular scoliotic deformities, bracing for spina bifida scoliosis is not effective. Thus, surgical fusion may be necessary if the deformity is severe or progressive. Posterior spinal fusion often includes fusion to the pelvis to correct pelvic obliquity. Anterior spinal release and fusion might be needed because the posterior spinal elements may be absent or dysplastic, compromising available bone stock for posterior instrumentation.

Kyphotic deformities are often progressive and treated surgically to prevent posterior skin breakdown and formation of pressure sores. However, due to the neural axis abnormalities common in these patients, a previous shunt may be present. It is of vital importance that shunt function is checked, as shunt compromise during surgical correction can lead to acute hydrocephalus in these patients, often resulting in death.

Soft tissue contractures about the hip greater than 40 degrees are often treated with surgical release. The optimal treatment of dislocated hips in patients with myelomeningocele is still debated. Most surgeons will treat hip dislocations in these patients without surgery. Some advocate for surgical reduction of a unilateral dislocated hip in a patient who is a community ambulatory in an effort to preserve and prolong ambulatory ability. However, re-dislocation rates after surgery are high, leading some authors to advocate for non-operative management.

Flexion contractures are common, and contractures of more than 20 degrees often require surgical management for those who are home or community ambulators. Hamstring lengthening, distal femoral hemiepiphysiodesis, and distal femoral extension osteotomy are commonly employed surgical techniques in this regard.

Serial casting for knee extension contractures may be attempted. If this fails, surgical quadriceps lengthening may be utilized. The goal of treatment of extension deformities is usually to reach a comfortable position for ease of sitting position in the wheelchair.

Clubfoot in myelomeningocele patients may be treated initially with the Ponsetti method in an attempt to provide non-operative correction, but the recurrence rates are high. Thus, surgical treatment with soft tissue releases or tendon transfers is often necessary to lessen the risk of recurrence.

Because prolonged casting can worsen the underlying osteopenia, fractures are immobilized for relatively shorter periods. Further, given the lack of protective sensation in many of these patients, frequent cast changes and vigilant attention to adequate padding must be employed to prevent skin breakdown.

Overall outcomes in spina bifida are strongly influenced by non-musculoskeletal issues, especially neurological complications such as Chiari malformations (with possible hydrocephalus), meningitis, and learning disabilities. Frequent urinary tract infections and pyelonephritis are common and may lead to sepsis.

Within the musculoskeletal system, patients with myelomeningocele are at a higher risk for infection. Pressure sores may develop into pressure ulcers due to lack of protective sensation.

Progressive kyphotic deformities can lead to pressure ulcers overlying a focal kyphotic segment. An ulcer markedly increases the risk of an infection that may travel to the central nervous system, owing to the posterior element defects. Untreated progressive scoliosis may lead to respiratory failure and restricted cardiac output. Because of the lack of adequate soft tissue posteriorly, myelomeningocele patients undergoing spinal fusion surgery are at a much higher risk of surgical site infection (Figure 6). These patients are also at a higher risk of non-union after fusion. 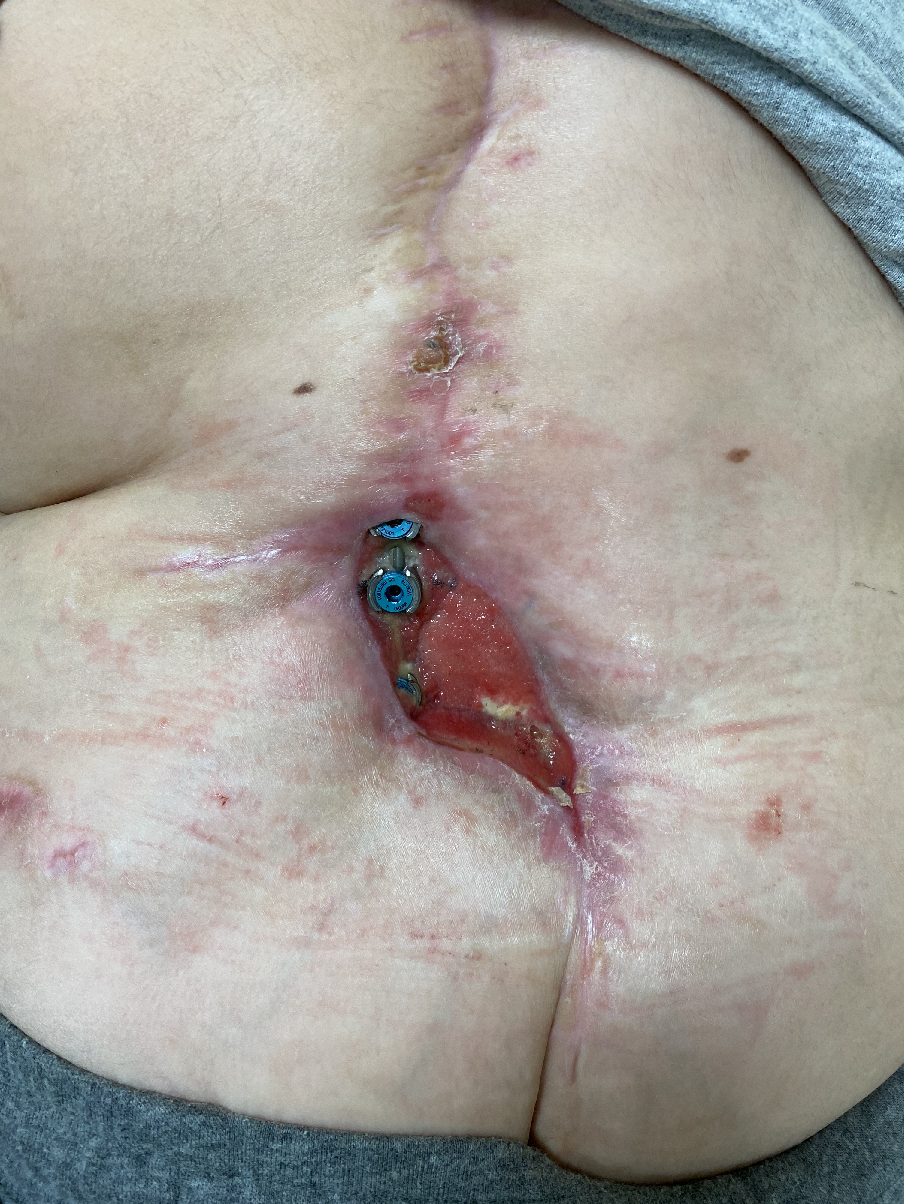 Figure 6: Clinical photograph of wound breakdown with exposed hardware in a patient after spinal fusion surgery.

Taking certain anti-convulsant medications, such as valproic acid, increase the risk of having a child with spina bifida. In women who take such mediation, the recommended daily folate intake is about ten times higher.

Obesity and maternal diabetes also increase the risk of giving birth to a child with spina bifida. To compensate for that, the recommended daily folate intake is higher in affected women.

In the United States, many foods are fortified with folic acid in an attempt to reduce the incidence of children born with spina bifida. The nationwide push to fortify many grains and grain-based foods decades ago has led to a decrease in spina bifida birth rates.

Fetal surgery is proposed to work by shielding the nerves from amniotic fluid, which is thought to be toxic. For that reason, surgery must be performed before 25 weeks gestation.