Slipped capital femoral epiphysis (SCFE, pronounced “skiffy”) occurs when there is abnormal movement of the femoral metaphysis relative to the epiphysis along the physis (growth plate). Thus, SCFE is technically a growth plate fracture. Because the femoral head is secured by the acetabulum, a sufficiently large force applied across the physis can cause the neck and shaft to “slip” away from the head (Figures 1 and 2). SCFE is most commonly (but not exclusively) seen in overweight, adolescent males. SCFE is usually treated with percutaneous pin fixation, to prevent further slippage.

Figure 1: A slipped capital femoral epiphysis of the left hip is shown on the radiograph. (Case courtesy of Prof Frank Gaillard, Radiopaedia.org, rID: 8229)

Figure 2: The relationship of the femoral head to the neck after a slip has been likened to an ice cream scoop falling off its cone.

Several studies have revealed pathologic physeal changes in SCFE, including replacement of the normal growth plate with abnormal cartilaginous and fibrous tissue. There may be widening of the physis along with hypocellularity and loss of columnar organization. The slip generally occurs through the proliferative and hypertrophic zones of the physis, the site where chondrocytes and normal components may have been replaced by ground substance. After fixation and stabilization of the slip, these pathologic findings seem to revert to more normal structure, at least partially.

In most cases of SCFE, the femoral neck and shaft slip anteriorly and rotate externally relative to the femoral head. Following this migration, hip flexion may cause impingement of the anterior femoral metaphysis leading to cyst formation, damage to the labrum or acetabular cartilage, and other degenerative changes.

The etiology of SCFE is unknown in most cases and is thought to possibly be multifactorial. In general, the slip is caused by an inability of the proximal femoral physis to resist physiologic loads.

Endocrinopathies that weaken the physis are thought to be responsible for 5% to 8% of SCFE cases. These include hypothyroidism, panhypopituitarism, growth hormone deficiency, parathyroid derangements, and hypogonadism. In patients with Down syndrome, the increased prevalence of hypothyroidism might explain the increased prevalence of SCFE. Renal osteodystrophy may also weaken the physis due to associated secondary hyperparathyroidism. Nonetheless, routine screening for endocrinopathies is not recommended for all patients with SCFE.

A history of radiation to the hip or pelvis as well as genetic and immunological factors may also have a role in physeal pathology, though the exact contributions are unclear.

The prototypical patient with SCFE is an obese, but otherwise healthy, adolescent male between the ages of 8 and 15. Patients who present younger than 8 or older than 15 years of age are more likely to have an underlying endocrinopathy. Patients often present with hip/groin pain, limp, and decreased range of motion at the hip. Notably, half of the children with SCFE do not report pain at all and some may report pain only at the distal thigh or knee. (This is due, most likely, to irritation of the obturator nerve near the hip.) Others may simply complain of altered gait.

Patients may identify an inciting event for their symptoms, though these episodes rarely involve high-energy trauma. Symptoms may have persisted for days or weeks prior to the child’s initial presentation. Both hips must be evaluated, as many cases of SCFE initially present with bilateral disease.

The patient will often present with decreased internal rotation, abduction, and flexion of the affected hip.Increasing slip severity can cause a propensity towards “obligate external rotation”, meaning the hip rotates externally as the examiner flexes the hip. The child may also have an antalgic gait with progressive external rotation of the foot and knee. In more severe slips, the affected limb may also appear shorter than the contralateral side.

Anteroposterior (AP) and lateral plain radiographs of both hips are typically the only imaging necessary for cases of suspected SCFE. Cross-table lateral films may be taken instead of a frog-leg lateral in cases of unstable SCFE in order to avoid further displacement or pain to the patient.

Frog lateral views are generally the most reliable means for detection of SCFE. As the slip progresses, it becomes evident on the AP view as well. Possible findings include widening of the physis, anterior displacement and external rotation of the femoral neck and shaft relative to the head, decreased height of the capital femoral epiphysis, and increased distance between the metaphysis and acetabular teardrop. 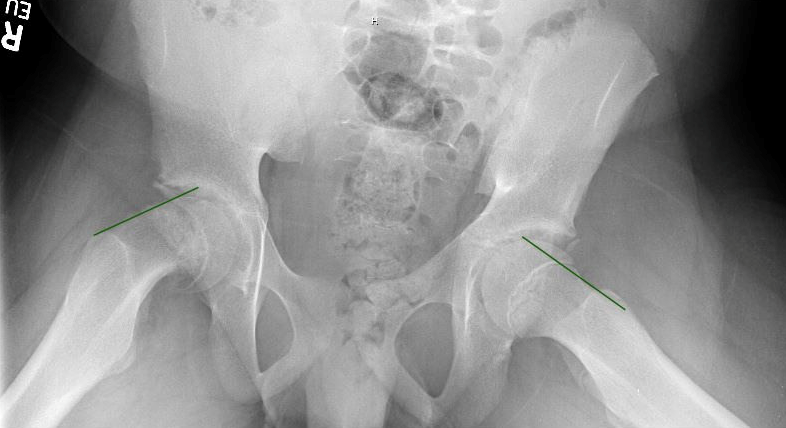 Figure 3: Frog lateral x-ray of a 12-year-old male with several weeks of right groin pain who was found to have right SCFE. Klein’s line is shown in green bilaterally. This line should intersect the lateral part of the superior femoral epiphysis as shown on the left. If the line fails to contact bone in the epiphysis, as shown on the right, SCFE can be diagnosed.

The magnitude of the slip is often described in terms of femoral head displacement as a percentage of the femoral neck diameter (mild is less than 33%, moderate is 33% to 50%, and severe is greater than 50%). Alternatively, the magnitude of the slip angle, measured between the femoral epiphysis and neck on the lateral view, can be described (mild is less than 30 degrees, moderate is 30 to 60 degrees, and severe is greater than 60 degrees).

Though additional imaging is generally unnecessary, magnetic resonance imaging (MRI) can detect distortion of the physis with bone marrow edema before the development of radiographically detectable SCFE. This is termed a “pre-slip” (Figure 4). Computed tomography (CT) is rarely needed but can allow for evaluation of physeal closure in patients who present very late in the course of SCFE. 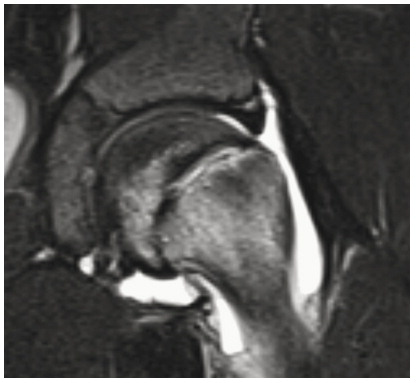 SCFE has an annual incidence of 2 to 13 per 100,000 and is 1.5 to 2 times more common in males. This condition typically affects boys ages 12 to 15 years and girls ages 10 to 13 years. SCFE is more common among patients with higher body weights. About 50% of SCFE patients are at or above the 90th percentile for weight, and about 70% are over the 80th percentile. The current literature suggests that more than half of children with SCFE are obese. Twenty percent of SCFE patients present with initial bilateral involvement. Another 10% to 20% develop a contralateral slip an average of 18 months after the initial slip.

SCFE should be suspected in all children with open physes, a limp, and complaints of hip, groin, thigh, or knee pain until proven otherwise. Other conditions that may be considered include transient synovitis, Legg-Calve-Perthes disease, septic arthritis, osteomyelitis, and fracture. Various metabolic and systemic disorders may also be associated with SCFE, such as obesity, endocrinopathies, renal osteodystrophy, and anatomic variation of the hip joint.

Any adolescent patient that presents with a limp and complains of pain in the hip, groin, thigh, or knee should be considered to have SCFE until proven otherwise. Specifically, complaints of thigh or knee pain merit examination of the hip. Such an exam might prevent delayed diagnosis, misdiagnosis, and unnecessary imaging or procedures. Additionally, both hips should be examined because of the high incidence of bilateral SCFE. Diagnosis of SCFE in pre- or post-pubertal patients should raise suspicion for underlying metabolic or systemic abnormalities. Inability to bear weight on the affected extremity may indicate an unstable SCFE, a condition that requires more urgent intervention.

Both stable and unstable SCFE require surgical management in order to prevent slip progression. In situ fixation is performed in most cases. Forceful manipulation is never recommended as this may increase the risk of osteonecrosis. This is particularly important for stable slips which, by definition, cannot be easily reduced.

In situ fixation is most commonly achieved with cannulated screws under fluoroscopic guidance. One screw is typically sufficient for stable slips (Figure 5). Two screws are occasionally used in unstable cases to provide increased fixation strength. For the single screw approach, the screw should be inserted perpendicular to the physis and in the center of the epiphysis in both the AP and lateral planes. This “center-center” location reduces the risk of penetration through the posterior femoral neck and resultant osteonecrosis. It also increases the surgeon’s ability to achieve good screw purchase in the femoral head. 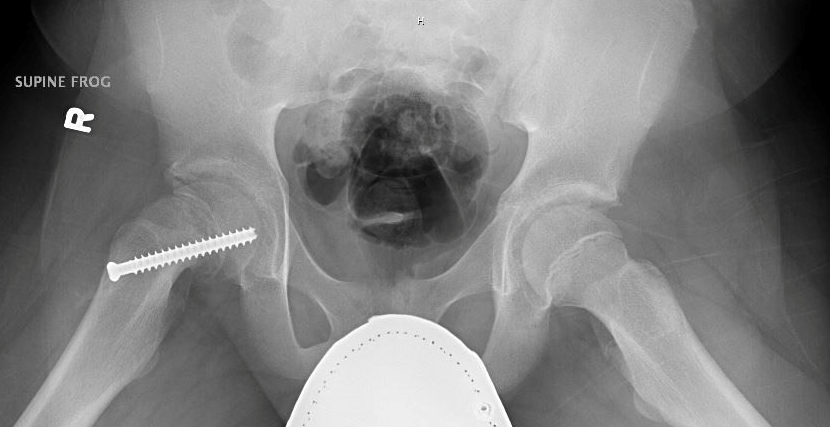 Prophylactic pinning of the contralateral (normal-appearing) hip is controversial. In brief, if the contralateral hip is pinned before it slips, by definition there will be no displacement. Preventative pinning may be beneficial because displacement is associated with a higher risk of degenerative joint disease. On the other hand, there are risks associated with prophylactic surgery in an unaffected hip, and if that surgery was indeed not necessary - something that will never be known - those risks were assumed in vain. Prophylactic fixation is performed more commonly in SCFE patients with a higher risk of developing a contralateral slip, including patients with significant growth remaining, endocrinopathies, or history of pelvic radiation.

For severe slips, in situ pinning may result in residual deformity, impingement, and degenerative changes. Additionally, sufficient stabilization of a severe slip with in situ pinning is difficult because it is not always possible to obtain the proper screw trajectory. Accordingly, closed reduction maneuvers have been described for severe, unstable SCFE. These should be performed only by experienced surgeons and only with gentle manipulation. The goal of this manipulation is not anatomic alignment, rather sufficient reduction to allow for a more appropriate screw trajectory. While outcome studies suggest osteonecrosis is associated with closed reduction maneuvers, it is not clear that this elevated risk is due to the reduction maneuver itself. It’s possible as well that reduction is reserved for the more severe slips, and thus the elevated risk of osteonecrosis seen is a manifestation of underlying disease severity. Open procedures are technically demanding operations and usually require a trochanteric osteotomy to visualize and correct the deformity. Even in experienced hands, there is a risk of osteonecrosis and other post-operative complications. Thus, treatment of these severe, unstable slips remains a matter of debate.

Several series have reported good or excellent outcomes in 90% to 95% of patients treated with in situ fixation. In series with less favorable results, outcomes seem to worsen with increasing slip severity and longer follow-up. Osteoarthritis is a common long-term consequence of both treated and untreated SCFE. Arthritis is caused by both anatomic and biomechanical changes that damage the articular cartilage of the hip joint. More severe slips appear to be at risk for earlier onset and increased severity of osteoarthritis.

Two potential complications of in situ fixation are osteonecrosis and chondrolysis. Osteonecrosis may be iatrogenic or the result of an unstable slip itself. While stable slips rarely lead to this complication, osteonecrosis is seen in about 55% of unstable cases. Chondrolysis, namely rapid and progressive loss of articular cartilage, can be caused by unrecognized pin penetration. Patients with osteonecrosis or chondrolysis tend to have poor outcomes and early osteoarthritis. Other complications include screw failure or impingement, slip progression, leg length discrepancy, and fracture of the proximal femur.

Though the specific cause of SCFE is often unknown, a number of factors are thought to increase the risk of a slip. These include obesity, endocrinopathies, renal osteodystrophy, prior radiation therapy, and anatomic abnormalities of the hip joint. Among patients with an endocrine abnormality, SCFE is 6 to 8 times more prevalent than it is in the general population. Accordingly, children with Down syndrome are at elevated risk due to the higher prevalence of hypothyroidism in this population. An underlying metabolic or systemic disorder should be considered in SCFE patients who are younger than 8 years, older than 15 years, or underweight.

On standardized examinations, if the question stem describes an obese adolescent who complains of leg pain or limps following minor trauma or sports activity, the correct answer likely involves SCFE.


Exam writers also expect you to recognize SCFE on the differential diagnosis of knee pain in the case of a “classic SCFE patient.”

Some studies of adult total hip arthroplasty patients suggest that 40% of these individuals initially suffered some type of pediatric hip disorder, SCFE chief among them.