Scapular fractures are rare (incidence: about 10 per 100,000 person-years), often a consequence of high-energy trauma. These fractures are often accompanied by other, more serious conditions such as a spinal fracture, lung injury, or head injury. Scapular fractures can be categorized by the affected region of the bone: namely, the coracoid, the acromion, the glenoid, the scapular neck, and the scapular body.

Non-operative treatment in the form of sling immobilization followed by rehabilitation is indicated for the vast majority of scapula fractures. Operative treatment is chosen for the more displaced fractures, especially if there is joint instability present. Most scapular fractures heal uneventfully; the patient’s overall outcome is usually dictated by the associated injuries, if present.

Figure 1: Anterior view of the thorax showing the scapulae in gold and posterior view showing them in red. (Modified from www.wikipedia.com/wiki/scapula)

The borders of the scapula are the superior border, medial border, and lateral border. There are three scapular “fossae” (plural for “fossa,” meaning “slight areas of anatomical depression”) -- two on the dorsal surface and one on the ventral surface. The dorsal fossae lie on either side of the scapular spine: the supraspinous fossa above, and the infraspinous below. The subscapular fossa is on the ventral surface.

Seventeen muscles attach to the scapula. In general, these muscles are divided into three major groups: intrinsic, extrinsic, and rotational/stabilization muscles.

The intrinsic muscles of the scapula include the rotator cuff muscles: supraspinatus, infraspinatus, subscapularis, and teres minor–the first three named according to the fossa in which they reside. These muscles are responsible for internal and external rotation of the humerus as well as abduction of the humerus.

The extrinsic muscles of the scapula include the biceps, triceps, and deltoid.

The rotational/stabilization muscles include the levator scapulae, rhomboids, trapezius, and serratus anterior.

The scapular movements and the muscles responsible for each are detailed in the table below.

Table 1: Six movements of the scapula and corresponding muscles involved in accomplishing those movements.

Motor vehicle collision is responsible for approximately 70% of scapular fractures. 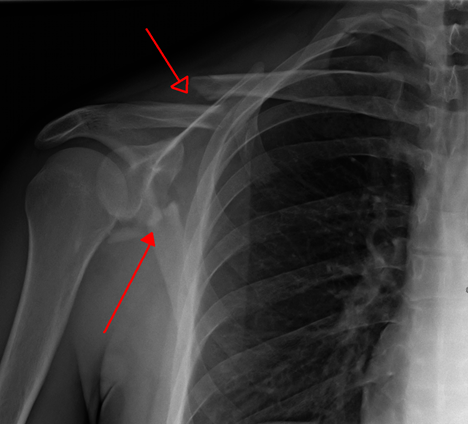 Figure 3: X-ray of an anterior-posterior (AP) view of the right shoulder. The solid red arrowhead identifies a displaced fracture of the scapular neck. The empty red arrowhead identifies a displaced mid shaft clavicle fracture. These injuries very commonly occur together and may indicate a “floating shoulder.” (Source: https://en.wikipedia.org/wiki/Scapular_fracture)

In the awake patient, the chief complaint is often pain along the scapula and posterior chest wall, along with limited range of motion of the shoulder joint itself.

In the patient who has a head injury, is intubated or is otherwise unresponsive, the only physical exam sign of a scapular injury may be crepitus to palpation over the scapula or limited passive range of motion of the ipsilateral shoulder. These findings are easily overlooked; it is important to scrutinize and obtain imaging studies for any area of swelling, ecchymosis, or crepitus.

As with all fractures, the initial evaluation must look for and exclude life threatening injuries such as massive hemorrhage which may occur due to an associated injury to the subclavian vessels.

A floating shoulder occurs when there are fractures of both the clavicle and scapular in which the glenohumeral joint is completely isolated from the body of the scapula. With such a pattern of fracture, the entire upper limb no longer has a stable connection to the axial skeleton – hence the term “floating” – and thus the affected limb displaces inferiorly by the force of gravity (Figure 3).

Scapulothoracic dissociation is a very rare, but often a life-threatening injury due to either a massive traction force to the upper extremity or blunt force to the chest. With a scapulothoracic dissociation, there is complete disruption of the scapular articulation with the chest wall. The scapula translates laterally along the posterior chest wall, often with severe injury of the surrounding neurovascular structures. As such, the typical presentation includes severe weakness or numbness in the injured extremity. If there is an associated disruption of the brachial plexus, the resulting motor and sensory loss will produce a paralysed and insensate “flail extremity.” Plain x-rays may show lateral displacement of the scapula along the chest wall, but often a scapulothoracic dissociation has no associated scapular fracture.

Initial imaging is with plain radiographs (often obtained as part of a routine trauma evaluation). Indeed, most scapula fractures are diagnosed on the initial chest radiograph (Figure 4).

CT scans, which are commonly obtained as part of the trauma investigations to evaluate the chest, will identify a scapular fracture and assess for displacement or intra-articular extension to the glenoid (Figure 5). Three-dimensional reconstructions of the scan are particularly helpful to assess displacement of the fracture and may aid operative planning (Figure 6). 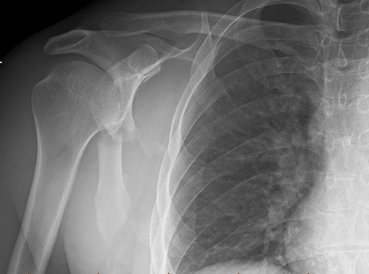 Figure 4: Plain radiography showing a comminuted and displaced fracture of the scapular body. On this x-ray, there is no clear extension of a fracture in to the glenoid. (Figures 4-6 Case Courtesy of Ms. Kayla H, Radiopaedia.org, rID: 72794) 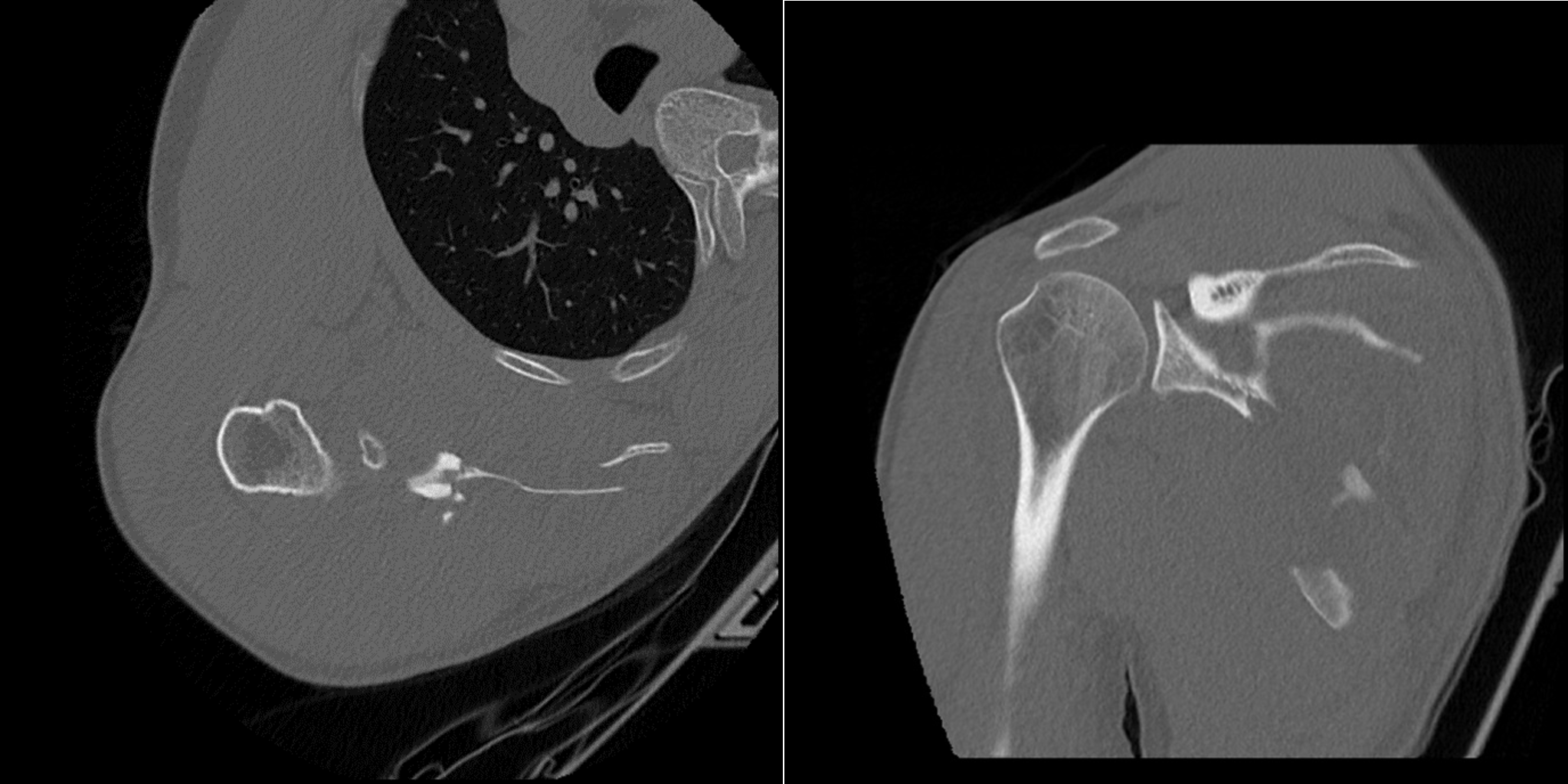 Figure 5: Axial and sagittal computed tomography (CT) images of same shoulder in Figure 4 showing an intact glenoid, but significant displacement and comminution of the fracture. 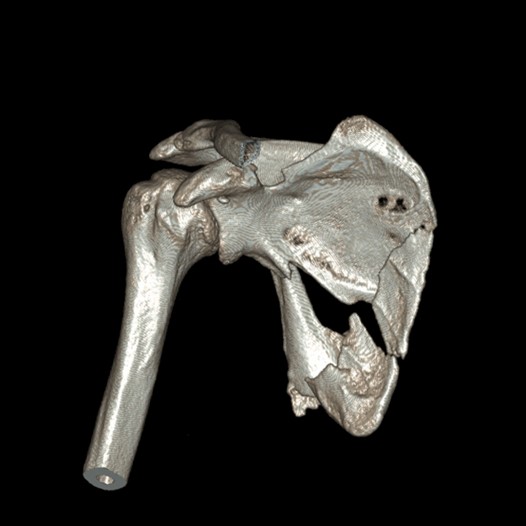 Figure 6: A 3D reconstruction view can help to understand the fracture pattern.

Scapula fractures are rare, accounting for less than 1% of all fractures and only 3-5% of fractures in the shoulder girdle. They typically occur in white males, age 20 to 60 years, with a small cluster seen in geriatric patients.

If there is a scapular fracture, the scapular body is the most commonly affected region (50%), followed by glenoid fractures (30%). Fractures of the acromion, scapular neck and coracoid make up the remaining 20%.

Given that scapular fractures typically present with posterior chest wall pain after high-energy trauma, posterior rib fracture is commonly on the differential diagnosis. Plain film radiographs may be inadequate to diagnose both rib and scapular fractures and a chest CT may be required. Patients with this high energy mechanism of injury, however, typically meet the criteria for CT screening as part of the initial imaging protocol which also allows other associated serious injuries to be identified in a timely manner.

Even if a CT scan of the chest is initially performed and formatted primarily to examine the lungs, it can be “re-formatted” to evaluate the scapula and glenohumeral joint, obviating the need for an additional scan.

Os acromiale, an unfused accessory ossification center, is found in about 10% of people, and can be mistaken as a scapular fracture (Figure 7). 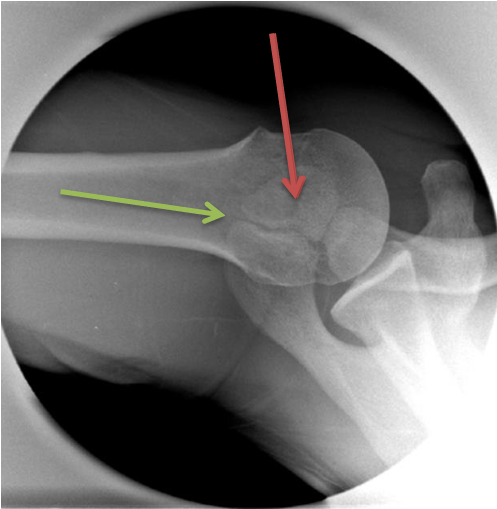 Figure 7: Plain film radiograph depicting an axillary lateral view of the right shoulder. The red arrow points to the os acromiale. The green arrow points to the area commonly mistaken as a fracture. This area normally would fuse during skeletal development. Note how the edges of the gap are not jagged but rather smooth and rounded with a well-defined denser/sclerotic margin - acute fractures typically appear “sharp” with straighter or jagged lines and no defined sclerotic margin. (Case courtesy of Radiopaedia.org rID: 11697)

Scapula fractures are commonly associated with other high-energy injuries. These patients typically present to the trauma bay. Advanced trauma life support (ATLS) should be initiated immediately. It is common for a scapula fracture to be found incidentally, that is, not because of the patient’s primary complaint. Indeed, if the presenting complaint leads to the detection of scapular fracture, the physician must recognize this as a red flag signifying high energy trauma and initiate a proper work up to rule out other serious injuries.

Scapulothoracic dissociation is a life-threatening injury and should be suspected in a hemodynamically unstable patient with lateral translation of the scapula on the trauma chest x-ray.

If there is a clavicle fracture in the setting of high energy trauma, the radiographs should be scrutinized to exclude a scapular fracture/floating shoulder injury.

Most scapular fractures can be treated non-operatively, as the majority of injuries are minimally displaced. Patients are briefly immobilized in a sling to help manage the pain and support the injured soft tissues. This is followed by progressive range of motion and weight bearing/resistive exercises.

Most surgeons agree that fractures that disrupt the congruity and/or stability of the glenohumeral joint should be treated surgically. In general, surgeons recommend operative intervention for glenoid fractures if there is 5 mm of articular step off or if there is any instability of the gleno-humeral joint. Due to the rarity of these injuries and lack of broad experience in any one service, robust evidence for surgical indications is lacking. Management decisions must be guided by first principles, namely, the restoration of articular congruity and the stabilization of the joint. Apart from cases with gross malalignment of the glenoid articular surface or an unstable gleno-humeral joint, it is reasonable to observe the patient while the fractures heal, with a delayed procedure to correct symptomatic bony irregularity if needed.


A floating shoulder injury will usually require early fixation of the clavicle or scapula (or both) to reconnect the glenohumeral unit to the axial skeleton.

The most common complications of surgical intervention are postoperative stiffness, nerve injuries and infection. Removal of hardware and soft tissue releases are often required to improve shoulder mobility.

Given that scapular fractures are typically a result of high-energy blunt force trauma, prevention rests on adherence to best practice safety guidelines on the roads and in the workplace, in addition to continued improvements and innovations of the safety features of vehicles and equipment.

The precise etymology of the word scapula is not known – translated from Latin, it means “shoulder blade” – but may come from a root word meaning “shovel.” Animal scapulae might have been used as a shovel like tool in primitive times. The word shares a similar root to the medical condition “scabies,” with connotations of “scraping.”