Radial head fractures are the most common type of elbow fractures in adults. Perhaps counter-intuitively, fractures of the radial head (which is part of the elbow) typically occur after a fall on an outstretched hand. The impact from the fall drives the radius proximally into the humerus, causing an injury at the elbow.

Figure 1: Radiograph of a normal elbow, left, with annotation on right showing the radius (yellow) articulating with the capitellum of the humerus (green). (Modified from Wikipedia http://bit.ly/203iaNm)

Patients with an injury to the radial head typically present with a history of a fall on an outstretched hand, or, following higher energy trauma and elbow dislocation. Pain, effusion over the elbow, and limited range of motion at the elbow and forearm are common symptoms. There is typically localized tenderness over the radial head on palpation; passive rotation of the forearm is also painful.

Intra-articular bleeding from the fracture may produce a palpable effusion. Aspiration of the effusion may assist with diagnosis and provide pain relief, thereby allowing faster and more effective rehabilitation.

Radiographs must be obtained in the case of suspected elbow fracture; standard anteroposterior (AP) and lateral films of the elbow and of the wrist usually suffice. The distal radio-ulnar joint should be assessed on the lateral film for dislocation. A fracture of the radial head with concomitant dislocation of the distal radio-ulnar joint is called an "Essex-Lopresti fracture."

Oblique views with the forearm in neutral rotation, so-called Greenspan views, show the radiocapitellar articulation and may be useful in the case of a suspected fracture that is not visible on AP or lateral films. Additionally, a positive fat pad sign on a lateral view indicates fluid in the joint, which in the acute setting is usually blood suggestive of a fracture (Figure 2). 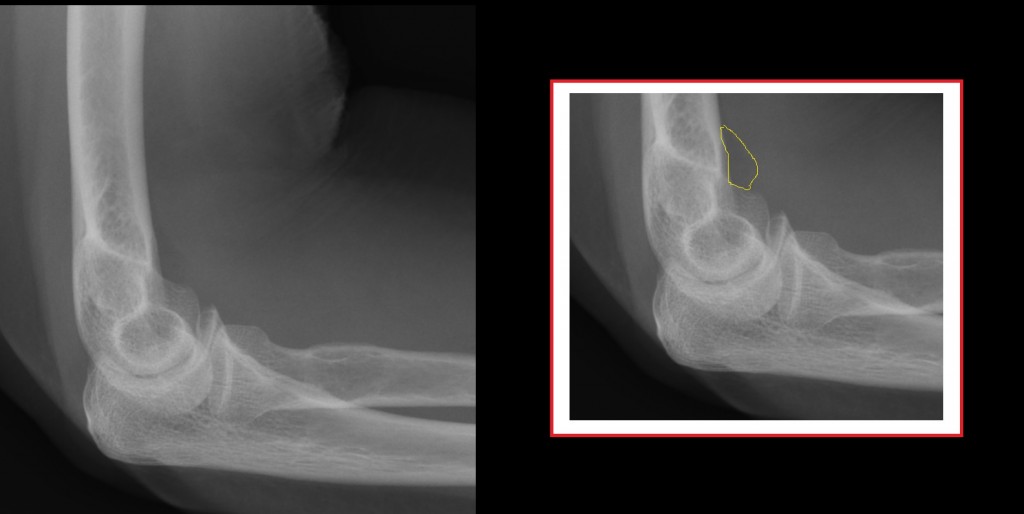 CT scanning may be used for preoperative planning, especially in the case of fragment displacement or comminution.

MRI may be used to assess for possible osteochondral injuries of either the radial head itself or, more commonly, of the capitellum. (This is usually reserved for patients with persistent pain after a period of immobilization.)

One-third of all elbow fractures involve the radial head. The male-female ratio roughly 1:1. Men who sustain radial head fractures tend to be younger than women with the same fracture. That may be because men usually have a high-energy mechanism of injury such as a fall from height or sports injury, whereas women, who tend to have lower-energy injuries, sustain the fracture due to inherent bone fragility.

Associated injuries, which should be ruled out when a radial head fracture is suspected or confirmed, include fractures of the capitellum, fractures of the distal radius, dislocation of the distal radio-ulnar joint (the so-called Essex-Lopresti fracture), rupture of the medial collateral ligament (MCL) causing valgus instability, rupture of the triceps tendon, and elbow dislocation. Radial head fractures are known to present in combination with MCL ruptures and coronoid process fractures, a constellation known as the “terrible triad.”

Limited range of motion of the elbow may be due to a hemarthrosis (which should be aspirated to allow evaluation of passive range of motion as well as for pain relief) but this limitation could also reflect a displaced fragment.

As noted above, the same mechanism that causes a radial head fracture (a fall on the outstretched hand, typically) can also cause other injuries at the elbow, including humeral fractures, medial collateral ligament sprains, or even triceps ruptures (akin to a quad tendon rupture). As such, a radial head fracture seen on radiograph is itself a "red flag" for an associated injury at the elbow and wrist. Therefore, the clinician must be sure that radiographs visualize both elbow and wrist joints.

A fracture from what appears to be a low-energy mechanism in an elderly woman may suggest osteoporosis.

The goals of treatment are to correct any inhibition of forearm rotation, to restore stability of the elbow and forearm, and to allow early motion.

The Mason classification of radial head fractures is useful for determining treatment options.

A Mason Type 1 fracture is a nondisplaced fracture with no mechanical blockage to forearm rotation (Figure 3). These fractures can be treated with a sling and early motion after 24-72 hours (indeed, as soon after injury as discomfort subsides). Aspiration of hemarthrosis in the radiocapitellar joint with local injection of anesthetic can relieve pain and aid in early motion. Sometimes a long arm splint for a few days is helpful for pain relief. 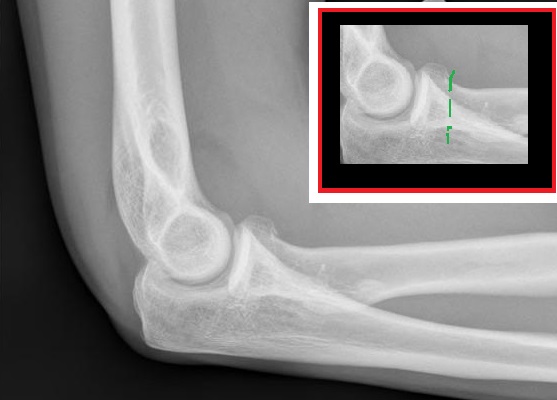 If there is mild displacement, angulation, impaction, or depression of the fracture (but still no mechanical block to forearm rotation), the fracture is a Type 2. These fractures typically do best if fixed surgically. The type of internal fixation will vary depending on fracture pattern and extent. Screws may be sufficient for a partial articular fracture, whereas a plate may be required for fractures that extend into the radial neck. Surgical fixation works best if the fracture has 3 or fewer articular fragments; if there are 4 or more, even though the fracture is still "type 2," excision and not fixation may be needed.

Fractures with significant displacement, angulation, impaction, or depression, or with mechanical blockage are classified as Type 3. For most of these, radial head excision with prosthetic replacement is recommended.

Radial head excision alone, without placement of a prosthetic head, obviates the need to wait for bone healing, but may lead to symptomatic proximal migration of the radius. The interosseous ligament between the radius and ulna may prevent some migration, but the absent “base” to the radius may make such migration inevitable.

A Mason Type 4 is a radial head fracture with an elbow dislocation and care is directed first at restoring the joint: patients with this injury should be sent to the Emergency Ward for urgent care.

Stiffness or contracture may occur secondary to prolonged immobilization of the elbow; therefore, it is essential to start active motion as early as possible. Pain, swelling, and inflammation may be hindering motion and should be investigated further for unrecognized injury. A supervised therapy program may maximize outcomes.

Chronic wrist pain may be the result of an unrecognized injury to the distal radio-ulnar joint (DRUJ), interosseous ligament, or triangular fibrocartilage complex (TFCC).

The posterior interosseous nerve (PIN) is vulnerable to injury during operative treatment. PIN neuropathy is a motor syndrome that results in wrist and finger drop.

Proximal radial migration may occur after radial head excision in the case of unrecognized unstable fracture-dislocations such as an Essex-Lopresti injury. (This migration, it should be noted, will occur only if there is a lesion of the interosseous membrane as well.)

In one study by Duckworth, et al., a trend was observed toward increased incidence of radial head fractures in patients with a lower socioeconomic status.

Note that the radial head and neck are located in the proximal forearm, at a point a lay person might identify as the “foot” of the bone.

Recognition and description of radial head fractures on radiographs.