The proximal humerus comprises four “parts”: the greater tuberosity, the lesser tuberosity, the humeral head and the humeral shaft. Fractures in this area are common, especially among older patients. Among elderly patients with osteoporotic bone, low-energy falls are the most common mechanism of injury; younger individuals sustain fractures of the proximal humerus from high-energy trauma, and may have concomitant injuries. Many proximal humerus fractures are amenable to nonoperative treatment. On the other hand, because displacement can upset the mechanics of the glenohumeral joint (with or without concomitant tearing of the rotator cuff) or disrupt the blood supply to the head, surgery may be needed in that setting. Management of displaced proximal humerus fractures remains controversial. Surgical indications are based on multiple factors including patient age, handedness, functional demands and evidence of pre-existing glenohumeral arthritis or rotator cuff pathology.

As shown in Figure 1 and 2, there are four bony “parts” of the proximal humerus. These represent the coalescence of distinct ossification centers and thus are prone to separation during injury. There are two regions designated as a “neck” of the proximal humerus. The  “anatomical neck”, representing the fused epiphyseal plate, is above the tuberosities and below the articular surface. The “surgical neck” is the junction between the shaft and the tuberosities. The region between the greater and lesser tuberosities is not a “neck”; rather, it is denoted as the “bicipital groove.” This groove is so named because it houses the long head of the biceps as it begins its course down the arm. 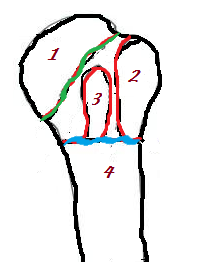 Figure 1: The four osseous segments are humeral head and articular surface (1), greater tuberosity (2), lesser tuberosity (3) and humeral shaft (4). The so-called anatomic neck is shown in green; this represents the fused epiphyseal plate below the articular surface. The so-called surgical neck is shown in blue. This is the junction between the shaft and the tuberosities. The bicipital groove lies between the greater and lesser tuberosities. 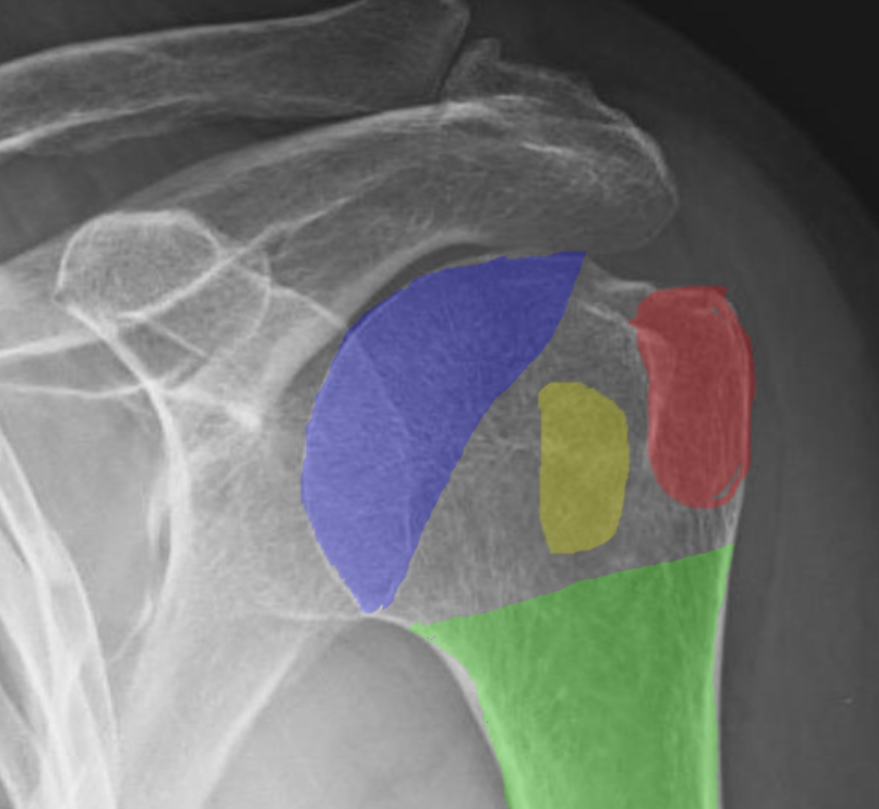 There are multiple muscular insertions on the proximal humerus. These attachments typically work in tandem to produce balanced forces that stabilize the glenohumeral joint. With a fracture, though, they can be deforming.

Pectoralis major inserts on the lateral margin of the bicipital groove, distal and lateral to the lesser tuberosity and can displace the shaft medially and anteriorly.

The deltoid inserts on the shaft distal to the greater tuberosity and abducts the humeral shaft.

The major blood supply to the proximal humerus is from the anterior and posterior humeral circumflex arteries. Fractures of the anatomical neck can lead to osteonecrosis if the vascular supply of the humeral head is disrupted.

The axillary nerve comes off the posterior cord of the brachial plexus. It then courses in an anterior and inferior direction lying just medial to the joint on the anterior aspect of the subscapularis. It then courses posteriorly, inferior to the glenohumeral joint. This nerve is susceptible to injury by traction when the humeral head comes out of place (either by fracture, dislocation or subluxation), owing to its relatively fixed position close to the inferior capsule.

Patients present with a known history of trauma.

The mechanism of injury typically varies based on age. For elderly patients, the history usually involves a low energy fall from a standing height. Younger patients often present following a high-energy trauma with a direct blow to the shoulder. Less commonly, proximal humerus fractures may occur as the result of a violent muscle contraction (i.e. during a seizure or following an electrical shock).

Initial complaints include pain and immobility of the affected upper extremity. Patients may report paresthesias or diminished sensation distal to the injury.

Complaints of weakness may be secondary to pain inhibition or possible nerve injury.

Patients will often present with the affected upper extremity held closely to the chest by the contralateral hand (to minimize painful motion).

Swelling of the affected limb appears within hours after injury. Bruising along the arm and chest wall (ecchymoses) might not appear until a few days after injury.

With a fracture, inspection may reveal subtle derangement of the normal contours of the shoulder, but gross deformity is rare.

Important elements of the history include the mechanism of injury. In the case of a fall, for instance, a syncopal event or history suggestive of a seizure would warrant further workup.

A careful neurovascular exam should be conducted with particular attention to the axillary nerve. This may be assessed by presence of sensation on the lateral aspect of the proximal arm overlying the deltoid. Motor testing (i.e. assessing deltoid and teres minor function) is often not possible at initial presentation due to pain.

Three radiographs, a true A-P of the proximal humerus,  a lateral (also known as a “scapular-Y” view) and an axillary view, should be obtained.

The A-P and lateral views are best for evaluation of the humerus. The axillary view is used to exclude dislocation/subluxation of the glenohumeral articulation.

Radiographs are used to classify the fracture in terms of the displacement of the parts affected. According to the system popularized by Neer (based on the original work by Codman), a broken part is designated provided it is displaced by 1 cm or more, or if there is 45 degrees or more of angulation.

(This classification has been criticized because it is not very reliable–two readers will often disagree on how many parts there are. On the other hand, the classification is powerful in that it reflects important clinical differences in terms of prognosis and treatment requirements, and thus it is still widely used. Because of the difficulty with x-ray interpretation, the text here will use line drawings and not clinical x-rays.) 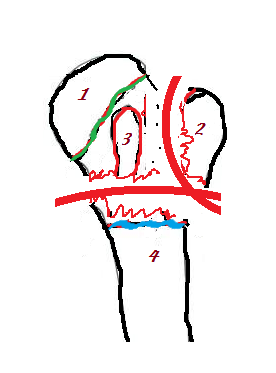 "Four-part fractures" (Figure 5) have displacement across fracture lines between all four parts. 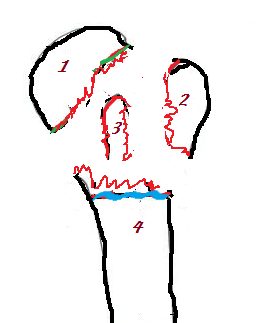 In addition, injuries can include fractures of the articular surface (head-splitting fractures and impaction fractures) and disruption of the glenohumeral articulation (fracture dislocation).

CT-scan may be helpful in evaluating articular involvement, degree of displacement, impression fractures and glenoid rim fractures. It can also be helpful when obtaining an axillary view is not possible.

MRI is usually not indicated unless rotator cuff integrity needs to be assessed.

Caveat: The Neer/Codman classification is used ubiquitously, though it was seen to have fairly low reliability (~50%) in reported studies. Unfortunately, CT scans do not help much either. That might be a function of the arbitrary criteria of 1 cm and 45 degrees. It may be best to “overcall” displacement in some cases: for example, treating a one-part greater tuberosity fracture as a two-part fracture, as the fragment can easily impinge even if only 9mm or 40 degrees displaced.

The list of possible diagnoses that could explain the typical presentation of a proximal humerus fracture include a shoulder dislocation, an AC joint separation or a scapular, spinal or rib injury. Note that especially in high-energy trauma patients, concomitant injuries are common. Thus, the presence of a proximal humerus fracture does not exclude a second musculoskeletal diagnosis. It is also important to exclude the diagnosis of pneumothorax and hemothorax; axillary, suprascapular, or brachial plexus nerve injury; and axillary artery damage. Damage to the rotator cuff is common with displaced fractures.

Patients may report paresthesias or diminished sensation due to diffuse swelling; a detailed neurovascular assessment is warranted especially in the setting of such symptoms. The most commonly injured nerve is the axillary nerve and it can be tested even without moving the shoulder by assessing sensation over the deltoid muscle and verifying at least isometric deltoid contraction.

Peripheral pulses may remain palpable due to collateral circulation. A vascular injury may be suspected due to mechanism or signs of expanding hematoma.

A fracture from a simple fall from a standing height suggests osteoporosis, as well as underlying diseases that cause falling.

A visible indentation of the skin under the acromion (a subacromial sulcus) may suggest dislocation of the glenohumeral joint.

Minimally displaced fractures (one-part fracture) can be treated with a short course of immobilization in a sling (10-14 days) with early shoulder motion in the form of pendulum exercises thereafter. Passive motion or active-assisted range of motion therapy is best deferred until bony union has occurred (typically 6 to 12 weeks post-injury).

The treatment of two-part fractures depends on which parts are involved. Anatomic neck fractures, often associated with disruption of the blood supply, are difficult to treat without surgery. By contrast, surgical neck and lesser tuberosity fractures can usually heal adequately with non-operative treatment. Greater tuberosity two-part fractures are more likely to need surgical fixation, either to repair the rotator cuff dysfunction that accompanies the fracture or to prevent impingement of a fragment with superior translation.

Surgical treatment options include the following:

With closed reduction and percutaneous fixation, the fracture is reduced under fluoroscopic guidance and wires are inserted percutaneously. The aim is to stabilize the fracture enough to allow motion without excessive surgical dissection. The axillary nerve, cephalic vein and posterior humeral circumflex artery are all at risk with this technique. Also, closed reduction and percutaneous fixation is not apt to work in osteoporotic bone or if there is comminution. Lastly, a second operation may be necessary for pin removal.

Open reduction and internal fixation may also be used (Figure 6). Here, after the proximal humerus fracture is exposed, the fragments are reduced. This is then followed by internal fixation with either plates or sutures. 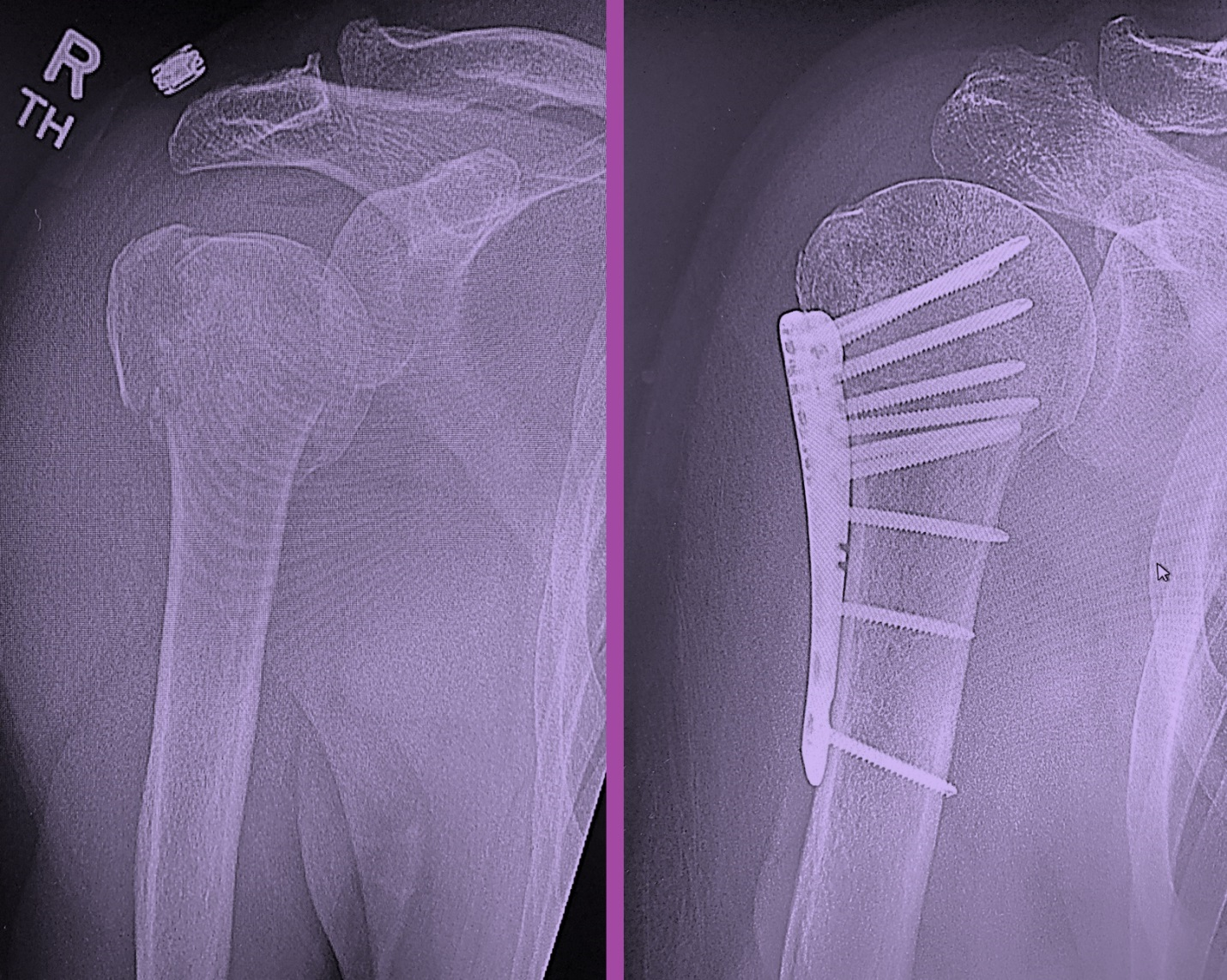 Locking plates are commonly used in the proximal humerus. Plate fixation is often augmented by sutures.

The use of an intramedullary device is a less invasive approach, as a full dissection is not needed; but of course it must be recalled that inserting the nail requires violation of the supraspinatus insertion (or if a more medial starting point is chosen, the superior articular surface itself).

Fractures that are unlikely to heal well (especially when the humeral head is not salvageable or there is extensive pre-existing arthritis) can be addressed with conventional joint replacement or reverse total shoulder replacement (Figures 7 and Figure 8). The latter is chosen when there is deficiency of the rotator cuff. 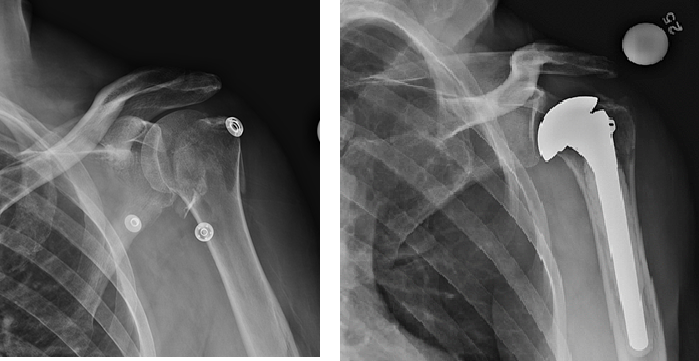 Displaced fractures that require surgery have less favorable outcomes. Even with full healing, there is often some component of arthrofibrosis and lost motion.

Four-part fractures are at especially high risk of developing osteonecrosis due to disruption of the blood supply to the head.

Proximal humerus fractures can have a significant detrimental effect on patient’s quality of life beyond the issue of arm function. Shoulder injuries have a tendency to disrupt sleep, for example, and it may be difficult to shower during the period of healing.

Poor bone quality in the form of osteopenia or osteoporosis is a major risk factor for proximal humerus fracture. Accordingly, some patients with this fracture survive the shoulder injury but then go on to have another, more devastating fracture elsewhere (e.g., the hip).

Osteoporosis and falling are the prime (modifiable) risk factors for proximal humerus fracture. Risk reduction involves maintenance of adequate bone mineral density (BMD) and decreasing the risk of falls. In osteopenic or osteoporotic patients, pharmacological therapy including calcium and vitamin D supplementation as well as bisphosphonates and other drug treatments have been shown to be effective in reducing the risk of fractures. For patients with comorbidities who place them at risk of falling (such as stroke), occupational therapy can be useful.

The classification of proximal humeral fractures is often associated with Dr. Charles Neer, but Dr. Neer himself credited E. A. Codman (Figure 9). Codman had many accomplishments (including the notion of collecting open data, the accomplishment that The CODMAN Group [publisher of this text] honors) but his anatomic analysis of the proximal humerus is among the larger ones. 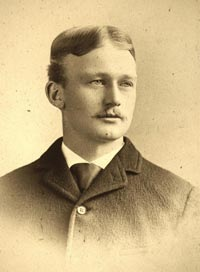