Plating a fracture clearly disrupts the soft tissue envelope around a fracture. Why, then, is surgical plating ever used?

"Rigid internal fixation of fracture fragments violates the normal biological processes...The healing of a fracture following rigid fixation is a testament to the body’s superior ability to overcome the unphysiologic obstacle created by the metallic implant. Fractures heal not because they are fixed but in spite of it."
-- Closed Functional Treatment of Fractures by Sarmiento and Latta **

Surgical plating disrupts the soft tissue envelope around the fracture and disturbs the biological environment conducive to healing. After all, you cannot insert a plate without dissection right near the fracture. This dissection exposes the fracture to the outside environment, allows the biological factors that appeared in response to injury to escape and likely disrupts the blood supply to the area  (if but to a small extent). All of these likely decrease the chance of the bone ultimately uniting. Why then would this be done?

Plates are chosen despite the need to open the fracture (and the problems it produces) because plates help restore alignment, especially near the joint line.

In fractures near the joint (so-called periarticular fractures), even slight deformities are poorly tolerated. That’s because if the bone heals but the joint is not aligned, the patient might no longer have a broken bone, but he or she still has a problem: a crooked joint. This joint is apt to function poorly. Moreover, malalignment can cause abnormal loading, and more likely, the development post-traumatic arthritis.

In addition, a plate promotes primary bone healing (without a fracture callus). This minimizes the mass of new bone produced, a feature which may be helpful near the joint line as well, as a callus might compress vital structures. For example, an exuberant callus from a distal radius fracture might compress the median nerve in the carpal tunnel.

For example, the plate shown in Figure 1 is able to help restore reasonable alignment to the knee joint.

Figure 1: Plate fixation of a proximal tibia fracture. As shown by the red parallelogram, the tibial plateau is now parallel with the surface of the femur. 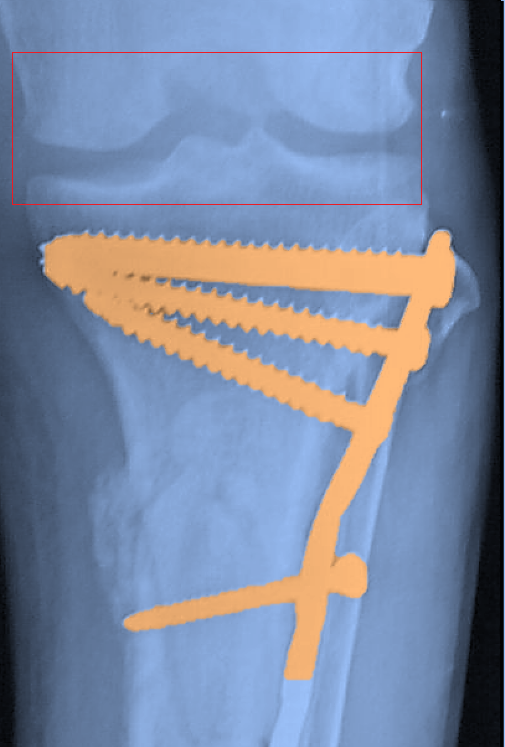 Figure 2: Intramedullary rod fixation of a tibia fracture. Note that no incisions are made near the zone of the fracture, shown in orange. The rod is inserted near the knee (red arrow)  and small incisions are made at the ends of the rod (shown by the blue arrows) to insert the locking screws. (Note that the fibula fracture is not treated explicitly; stabilization of the tibia indirectly stabilizes the fibula enough for it to heal.)

This indirect method of nailing tends to disrupt the biological environment near the fracture much less (though still some), and as stressed by Dr. Sarmiento and Dr. Latta, sometimes functional bracing is the best choice, even if there is an implant available.

The approach to fracture treatment should follow the adage attributed to Einstein: “Everything should be made as simple as possible, but not simpler.” If a fracture can be treated by closed methods, it should be. If surgery is needed, percutaneous pinning is likely to be simpler (i.e. less disruptive) than open surgery, and if open surgery is needed, indirect fixation with a nail is likely to be simpler than plating. Nonetheless, getting the bone to heal is only part of the cure. The true goal of fracture treatment is functional restoration, and this may require restoring anatomy precisely and minimizing callus formation. These aims are often best met with surgical plating. In the case of periarticular fractures, for one, a plate may indeed be the simplest solution.