Pediatric Fractures of the Lower Extremities

Pelvic avulsion fractures occur in children and adolescents because their muscles and tendons are stronger than the area of bone (the secondary ossification centers) where the tendons attach. These fractures occur after a strong and sudden muscle contraction, which pulls the bony insertion site off of the pelvis. This typically occurs in track athletes and soccer players, who frequently perform eccentric contractions. The most common pelvic avulsions are of the anterior superior iliac spine (ASIS) by the sartorius; of the anterior inferior iliac spine (AIIS) by the rectus femoris;  and of the ischial tuberosity by the hamstrings.

Athletes with pelvic avulsion fractures will present with pain at the avulsed insertion site and pain with concentric contraction of the involved muscle or muscles. The differential diagnosis includes muscle strain and other patterns of pelvic and/or acetabular fracture. High energy trauma and intra-abdominal injury are red flags that may indicate a more complex pelvic fracture involving the pelvic ring or acetabulum. AP pelvis radiographs are usually sufficient to diagnose pelvic avulsion fractures, but additional radiographs or a CT scan can be obtained when the diagnosis is uncertain or higher energy pelvic fractures are suspected. The radiographs will reveal a separation of the insertion site (i.e. ASIS or AIIS) from the rest of the pelvis. Treatment of these injuries is almost always non-operative because the pelvis remains stable. NSAIDs and crutches for four to six weeks can be prescribed for symptomatic treatment until the fracture heals, followed by a slow return to sports. These fractures usually heal and do not result in significant long-term sequelae.

Femoral shaft fractures are described based on their location and fracture pattern. Patients will present with leg pain, refusal to ambulate, or a deformity after a fall or other trauma. Physical exam should include a complete evaluation for other associated injuries, particularly in the setting of high energy trauma. Differential diagnoses include proximal femur and femoral neck fractures, hip dislocation, and distal femoral physeal fractures.

An important red flag is a young child with a femoral shaft fracture who is not yet of walking age. The risk of non-accidental trauma in these children is very high and should be considered during the workup.

Femoral shaft fractures can be diagnosed with an AP and lateral femur radiograph. Advanced imaging is usually not necessary unless the fracture extends proximally or distally into a physis.

Treatment is based primarily on age and size of the child as well as stability of the fracture pattern. Children younger than 6 months old can be treated in a soft harness. In this age group, the fracture is apt to heal without significant sequelae because of the bone’s remodeling potential. Children 6 months to ~6 years old can usually be treated successfully with a hip spica cast. Many pediatric femoral shaft fractures are low energy injuries with a spiral pattern. These fractures are not at significant risk for shortening. Furthermore, because the injured bone typically overgrows the contralateral side by up to 2 cm, the mild shortening that will occur during spica cast treatment is well-tolerated (Figure 1).

Figure 1: Radiographs demonstrating a femoral shaft fracture at injury (panel 1), one week after initial casting (panel 2), and two months after casting with complete healing (panel 3). The green star and lines in panel 2 denote the area where the cast was wedged to better align the bone.

The tibial tubercle is the insertion site of the patellar tendon, an apophysis just distal to the proximal tibial epiphysis during growth. Eccentric contraction of the quadriceps, as seen during the landing from a jump, can avulse the tibial tubercle.

The clinical presentation of tibial tubercle fractures includes pain, ecchymosis, and deformity over the fracture site. Patients will often be unable to perform a straight leg raise. Fractures that extend into the knee joint will be associated with a hemarthrosis. The differential diagnosis includes proximal tibial shaft fractures, tibial spine fractures, and patellar sleeve fractures. Red flags are any signs or symptoms of lower extremity compartment syndrome.

Radiographs of the knee are used to diagnose tibial tubercle fractures; a CT scan of the knee can also be obtained for diagnosis and surgical planning when the fracture pattern is unclear.

The treatment of tibial tubercle fractures is dictated by the fracture pattern and displacement. Fractures of the tip of the tibial tubercle can be immobilized in knee extension if they are non-displaced and if the extensor mechanism remains intact. Fractures that extend between the tubercle apophysis and the proximal tibial epiphysis are usually treated surgically with open reduction and internal fixation of the tibial tubercle in order to restore/preserve the extensor mechanism. Arthrotomy or arthroscopy might be needed in some cases to ensure that the meniscus is not trapped in the fracture site (Figure 2).

Figure 2: Lateral radiograph (A) and sagittal CT scan (B) demonstrating a displaced tibial tubercle fracture extending through the tubercle apophysis and into the anterior epiphysis, as well as an intraoperative lateral radiograph after reduction and screw fixation of the fracture (C).

Compartment syndrome is the most concerning short-term complication of tibial tubercle fractures; and patients should be monitored after both surgical and nonsurgical treatment of their injury. Injury and growth arrest of the tibial tubercle apophysis can also lead to a recurvatum deformity of the knee over time. This is a greater concern in younger patients, as they have more growth remaining. Younger patients should therefore be monitored with periodic radiographs. The most common complication of surgical treatment is symptomatic hardware over the tibial tubercle. This is seen because there is minimal soft tissue coverage in this area. Many patients thus elect to have their hardware removed after their fractures have healed.

Patients with tibial spine fractures often present with knee pain and hemarthrosis after a contact or non-contact sports injury. Their exam can be limited by pain and swelling, and the differential diagnosis of a knee hemarthrosis in children is an ACL tear, osteochondral or intra-articular fracture, meniscal tear, or patellar dislocation. Red flags include extremely limited motion, which may indicate an associated bucket handle meniscus tear or large intra-articular osteochondral fragment, as well as inability to perform a straight leg raise, which may indicate a patellar sleeve or tibial tubercle fracture. The diagnosis can be made with AP and lateral radiographs of the knee, which will show displacement of the tibial spine fragment. An MRI is often performed to evaluate for additional intra-articular injuries, including meniscus tears and osteochondral fractures, which are commonly associated with tibial spine fractures. The MRI can also help to more accurately define fracture displacement, which is an important consideration in treatment decision-making.

Tibial spine fractures that are non-displaced or minimally displaced can be treated in a long leg cast with the knee in extension. If there is more than 5 mm of displacement, surgical reduction would be needed to restore tension to the ACL. Surgical treatment can be either open or arthroscopic, with either suture or screw fixation.

The most common complication of tibial spine fractures, particularly those with more severe fracture displacement or a longer operative time, is arthrofibrosis. Arthrofibrosis produces knee stiffness in both flexion and extension. Immobilization of the knee for more than four weeks is a known risk factor for arthrofibrosis and is accordingly avoided whenever possible.

Patients present with anterior knee pain, hemarthrosis, and inability to perform a straight leg raise (i.e., the extensor mechanism is not intact). In some cases, with wide displacement of the fragments, a defect can also be felt over the distal patella at the location of the injury.

Patellar sleeve fractures are diagnosed with AP and lateral radiographs of the knee. These images will usually reveal at most a small bony fragment. Nonetheless, there is often a large piece of patellar cartilage attached to this bone and not apparent on radiographs as well. Patella alta and a knee effusion will also indicate the disruption of the extensor mechanism on radiographs and confirm the diagnosis (Figure 3). 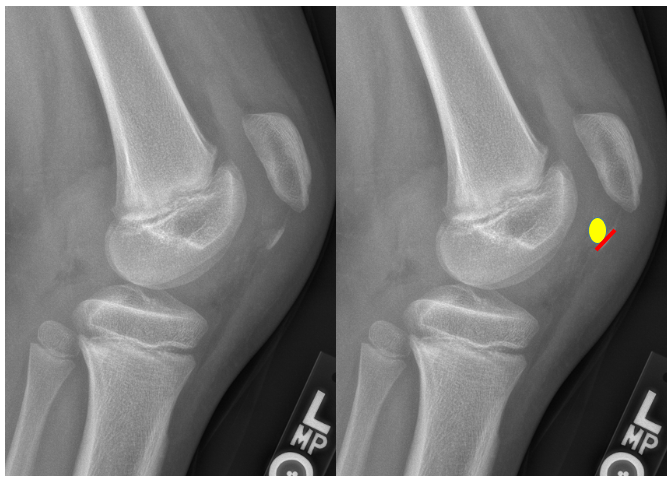 Figure 3: A lateral radiograph of the knee, demonstrating an avulsed distal patellar bone fragment is shown at left. The image at right is the same x-ray, with the cartilage and bone fragment highlighted in yellow and red, respectively. Note also the proximal migration of the rest of the patella.

Treatment of patellar sleeve fractures is surgical, as the extensor mechanism must be restored in order to regain active knee extension. In addition, fixation of the fracture will restore the articular surface of the patella when a large chondral fragment is attached to the distal pole fragment. Potential complications of patellar sleeve fractures are residual extensor lag, quadriceps weakness, and loss of reduction and malunion or non-union of the fracture site, although these complications are uncommon.

When children are nearing the end of their growth, the distal tibial physis does not close all at once. Rather, the central region of the physis begins to close first. The medial region closes next, and the lateral region is last. Because the open physis is weaker than the nearby bone, common patterns of “transitional” ankle fractures occur.

The Tillaux fracture is a fracture of the anterolateral epiphysis, or a Salter-Harris Type III injury.

Triplane and Tillaux fractures are two of the most common transitional ankle injuries, but other variants can occur.

Most injuries occur after an ankle twisting mechanism, and patients present with ankle pain, swelling, and inability or decreased ability to bear weight. Examination of the skin and a distal neurovascular exam should be performed. The differential diagnosis for transitional ankle fractures includes ankle sprain, extra-physeal fractures of the distal tibia or fibula, and syndesmotic ankle injury. Red flags include an open fracture and other severe soft tissue injury that may indicate a higher energy injury.

Transitional ankle fractures can be diagnosed with radiographs of the ankle, as well as radiographs of the knee, tibia and fibula, and foot, to rule out associated injuries. Because transitional fractures are intra-articular, a CT scan is often needed to help define the injury pattern and determine the degree of displacement (Figure 4). 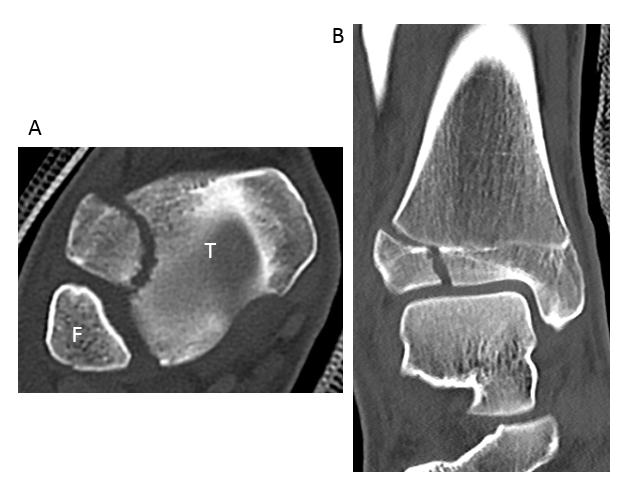 Figure 4: Axial (A) and coronal (B) CT scan images of an ankle demonstrating a tillaux fracture injury pattern (T=tibia, F=fibula).

Treatment is typically chosen based on the amount of fracture displacement inside of the joint itself, and the goal of treatment is to restore a congruent joint line. Non-displaced fractures can be treated with non-weightbearing in a long leg cast and transition to a short leg cast for a total of four to six weeks. Fractures with >2 mm of displacement inside of the joint are treated with open reduction and usually one to two percutaneous screws, depending on the fracture pattern, followed by a period of casting and non-weightbearing.

Physeal arrest causing a clinically significant leg length discrepancy or angular deformity is usually not a concern with these fractures. That is simply because patients who sustain these fractures are older and have minimal growth remaining.

Understand the growth center relationship to unique pediatric fractures. Be able to perform a neurovascular exam of a child with a supracondylar humerus fracture or triplane ankle fracture. Understand the differential diagnosis for a hemarthrosis of the knee in children and adolescents.