Paget's disease is a condition of dysregulated bone remodeling, characterized by rapid osteoclastic bone resorption, followed by increased osteoblastic bone formation. The resulting new bone is dense, yet structurally fragile. The spine, skull, pelvis, and femur are the most common locations. Bone overgrowth may cause pain, arthritis, and deformities (the latter giving rise to the condition’s historical name, osteitis deformans). The bone in Paget's disease is also susceptible to fracture. Albeit rarely, a region of bone affected by Paget's disease can undergo malignant transformation and become a sarcoma. Many cases of Paget’s are asymptomatic, and are detected incidentally on radiographs obtained for another reasons.

Paget’s disease may affect any bone in the body, though the pelvis, spine, skull, femur, and tibia are most commonly affected.

Paget’s disease is a condition of abnormal bone remodeling. During normal bone remodeling, there is a balance between bone resorption by osteoclasts and new bone formation by osteoblasts. In Paget’s disease, there is increased bone resorption by the osteoclasts, followed by an associated burst of osteoblast activity. While the exact cause is unknown, a viral infection is suspected.

Individuals with Paget’s disease may be asymptomatic and diagnosed incidentally. Other individuals may experience pain and swelling of the affected extremity. Acute onset pain may be caused by pathologic fractures of the affected bone.

The bone overgrowth seen in Paget’s Disease may cause spinal stenosis, with result lower extremity or spinal signs and symptoms (SEE CHAPTER). 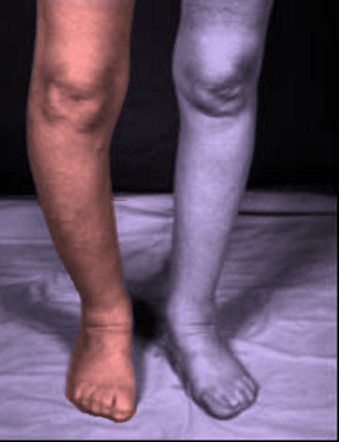 Figure 2: Bowing of the right leg due to Paget's disease involving the right tibia. (Image courtesy of https://www.ncbi.nlm.nih.gov/books/NBK279033/figure/pagets-disease-bone.F2/)

Hearing loss, vision changes and loose dentition may develop as a result of increased bone formation in the skull, leading to nerve compression.

The most serious complication of Paget’s disease is the transformation of a lesion into a malignant tumor, such as osteosarcoma. Other tumors such as fibrosarcomas or chondrosarcomas may also develop. Thus, if a known Paget’s patient develops acute worsening extremity pain and swelling, a clinician must consider malignant transformation as the cause.

X-rays are often the initial imaging modality used to evaluate patients for Paget’s disease. The affected bone may demonstrate different radiographic findings depending on which phase is occurring.

During the lytic phase, there are regions of lucency with expanded and thinned cortices from the increased osteoclastic resorption. This area is often described as a “blade of grass” or “flame-shaped” (Figure 3).

Figure 3: The “blade of grass sign.” This is a lucent area in a long bone seen during the lytic phase of Paget disease of bone. (Case courtesy of Radiopaedia.org, rID: 51018)

During the sclerotic phase, there is bony enlargement with thickened cortices due to the increased osteoblastic activity and subsequent bony formation.

During the mixed phase, there will be regions suggestive of both the lytic and sclerotic phase (Figure 4). 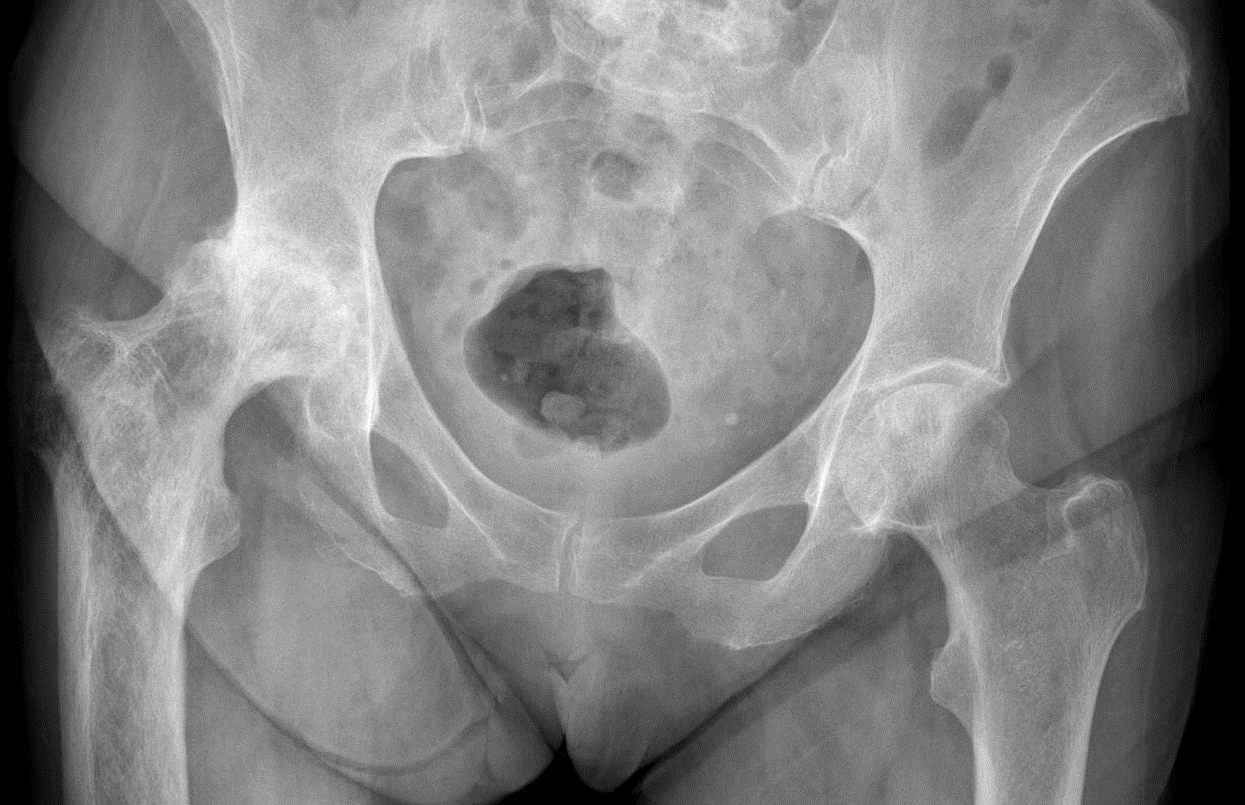 Pathologic fractures may be identified as a result of weakened bone from increased osteoclastic resorption.

Classically, “cotton wool exudates” may be observed in the skull due to the increased bony turnover which occurs as a result of the disease process – a disease process called osteitis circumscripta (Figure 5). 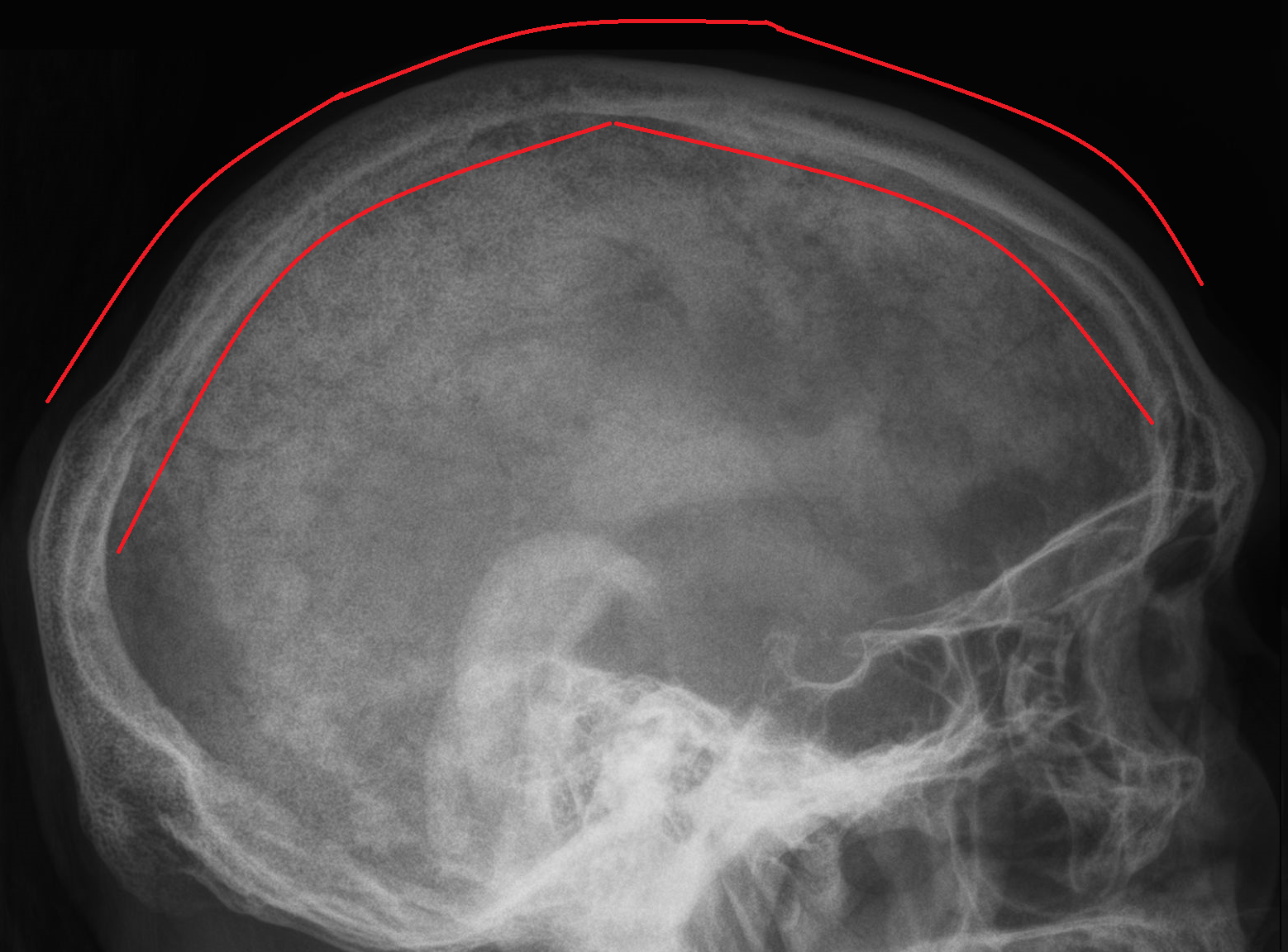 If a patient is known to have Paget’s disease and a radiograph identifies cortical bony destruction with an associated soft tissue mass, Paget’s secondary sarcoma is a likely diagnosis that must be excluded.

A bone scan (Figure 6) may be obtained which accurately marks the sites of disease. The lesions will appear intensely hot in the lytic and mixed phase secondary to increased osteoblastic activity and less hot in the sclerotic phase. 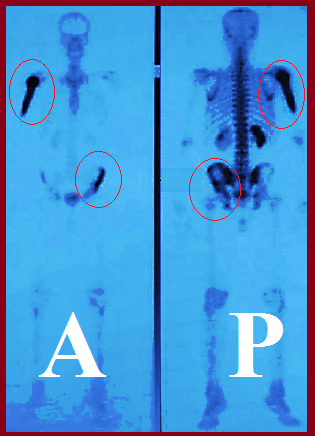 A biopsy from a Paget’s bony lesion would reveal woven bone with irregular broad trabeculae in a mosaic pattern with interspersed fibrous vascular tissue. There will be numerous multi-nucleated osteoclasts with virus-like inclusion bodies present. The osteoclasts in a Paget’s lesion can be distinguished from normal osteoclasts by having increased nuclei and larger size.

Paget's disease of bone is found in approximately 3% of all people over 50 years of age in the United States, with its prevalence rising to 10% or more in people 80 years of age. The disorder is rarely recognized before age 40; thus, the overall prevalence is about 1% of the entire US population. Paget's disease is approximately four times more likely in people who have relatives with the condition. Paget's disease is also prevalent in some countries, e.g., England, western Europe and the United States, but other countries such as China, Japan, and India have low rates. These data suggest a genetic contribution to the risk of disease.

Lesions may occur singularly or multiply in numerous bones. The bones most commonly affected are the femur, pelvis, tibia, skull, and spine.

If a patient presents with a bony lesion and they are older than 40, a clinician must always be suspicious for bony metastasis, lymphoma, and myeloma. Hyperparathyroidism and bony infarcts must also be included in the differential in patients with bone lesions in their 5th decade and beyond. Infection, as a general rule, must be considered and excluded for all bony lesions.

Paget’s can appear in more than one bone. If one lesion is found, a skeletal survey (complete body radiography) is indicated to look for other lesions. (Alternatively, a bone scan can be performed and radiographic examinations can be limited to sites that demonstrate increased uptake on the scan.)

If a patient is known to have Paget’s disease and presents with an acute increase of pain in the affected extremity and swelling, a clinician must be suspicious for malignant transformation to Paget’s secondary sarcoma. Although sarcoma occurs in less than 1% of all patients with Paget’s, the risk is considerably higher than the rate for the general population and thus must be considered. A bone biopsy may be indicated.

Individuals who are asymptomatic may be treated with observation and supportive therapy such as physical therapy and anti-inflammatories.

Patients with significant angulation or bowing of the femur or tibia may be candidates for realignment osteotomies.

Patients who have sustained pathologic fractures are candidates for operative fixation and stabilization of the fractures, to be sure. Some impending fractures might be fixed prophylactically.

Most cases of Paget’s disease occur spontaneously. Genetic mutations appear to play a role in Paget’s disease, however, the exact extent is currently unknown.

Paget’s disease is named after Sir James Paget, who also described what is now called “Paget's disease of the breast,” a form of breast cancer involving the nipple.