Although bone is part of the vascular system (and therefore fractures can cause hemorrhage and metastatic cells to lodge in the skeleton), why might antibiotics have trouble reaching areas of infected bone in osteomyelitis?

Osteomyelitis is an infection of bone that is caused by either hematogenous spread, contiguous spread from adjacent soft tissues or joints, or direct inoculation (i.e. during trauma or surgery).

The majority of cases of osteomyelitis are caused by Staph aureus bacteria. Other implicated pathogens include Staph epidermidis, gram negative rods, and salmonella species (in patients with sickle cell disease), although these are much less common.

In addition to bacteria, the region of bone with osteomyelitis contains dead bone, local inflammation, and granulation tissue.

In an attempt to “wall off” the infection, bone grows over the focus of osteomyelitis. This bony growth forms a thick sheath known as the involucrum. The area surrounded by the involucrum, the center of infection, is called the sequestrum.

This process of sequestration is similar to that of an abscess formation in soft tissue (Figure 1). Sequestering the site of infection from the circulation has evolved to protect the body from further spread of bacteria. Unfortunately, the process by which the bacteria are segregated also prevents blood flow to the focus of osteomyelitis. Thus, antibiotics intended to treat the infection have difficulty reaching their target. 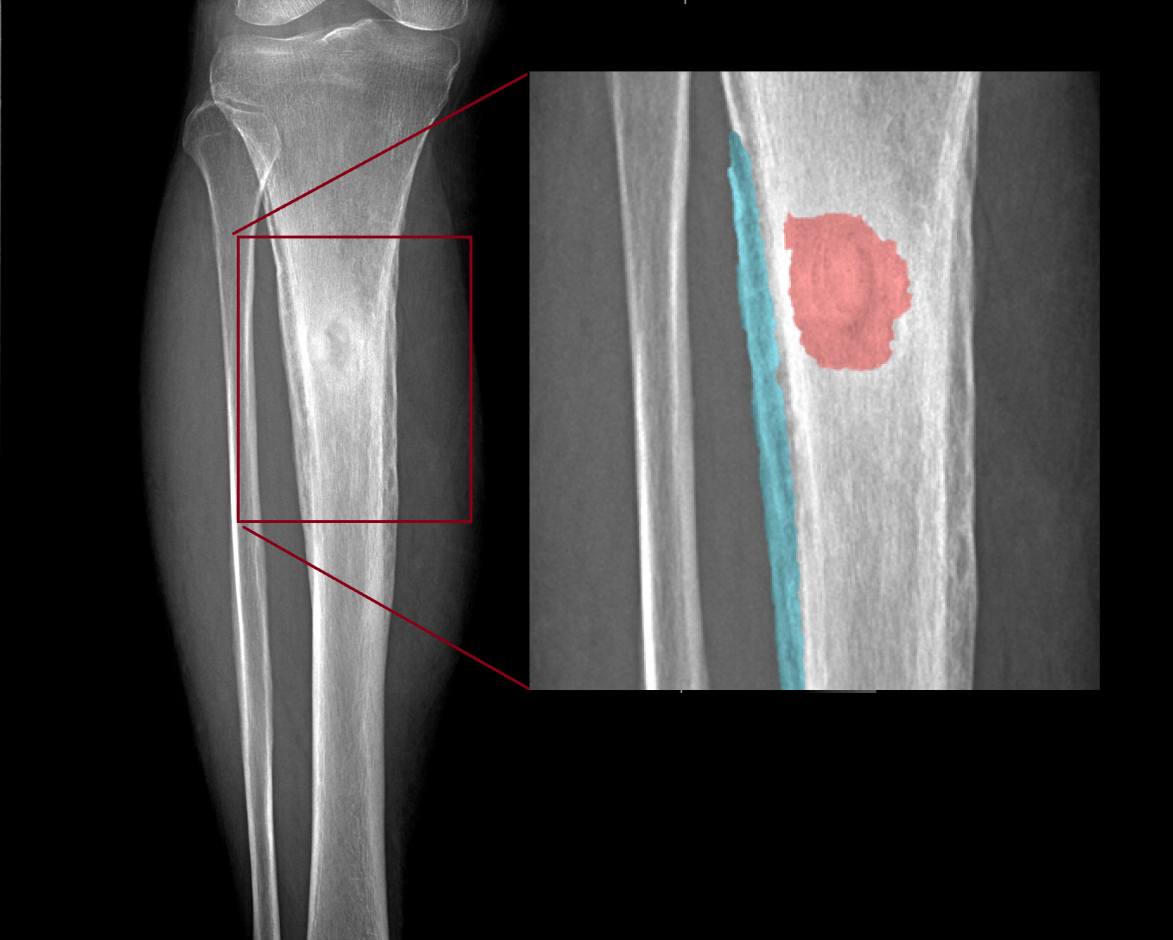 Figure 1: Osteomyelitis of the tibia. The image on the right is modified to show the focus of infection highlighted in red and the lateral aspect of the involucrum highlighted in blue. (Image modified from Radiopedia.org, rID: 29506)

Surgical debridement is a major component of treatment in osteomyelitis. Surgery not only physically removes infected tissue, but it also facilitates the delivery of antibiotics.  Local antibiotics can also be administered by implanting polymethyl methacrylate [PMMA] or calcium sulfate cement (i.e. Stimulan®) that contains and then elutes antibiotics (Figure 2). 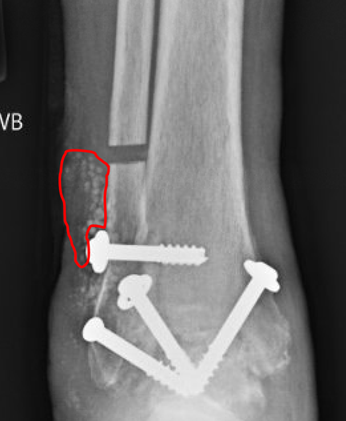 Calcium sulfate cement is biodegradable and does not need to be removed; PMMA cement is not absorbed by the body and thus a subsequent procedure may be needed for its removal. On the other hand, PMMA can provide structural support. Thus, for example, a surgeon may elect to fashion a temporary intramedullary nail made of antibiotic-impregnated PMMA and a metal guidewire (as shown in Figure 3). 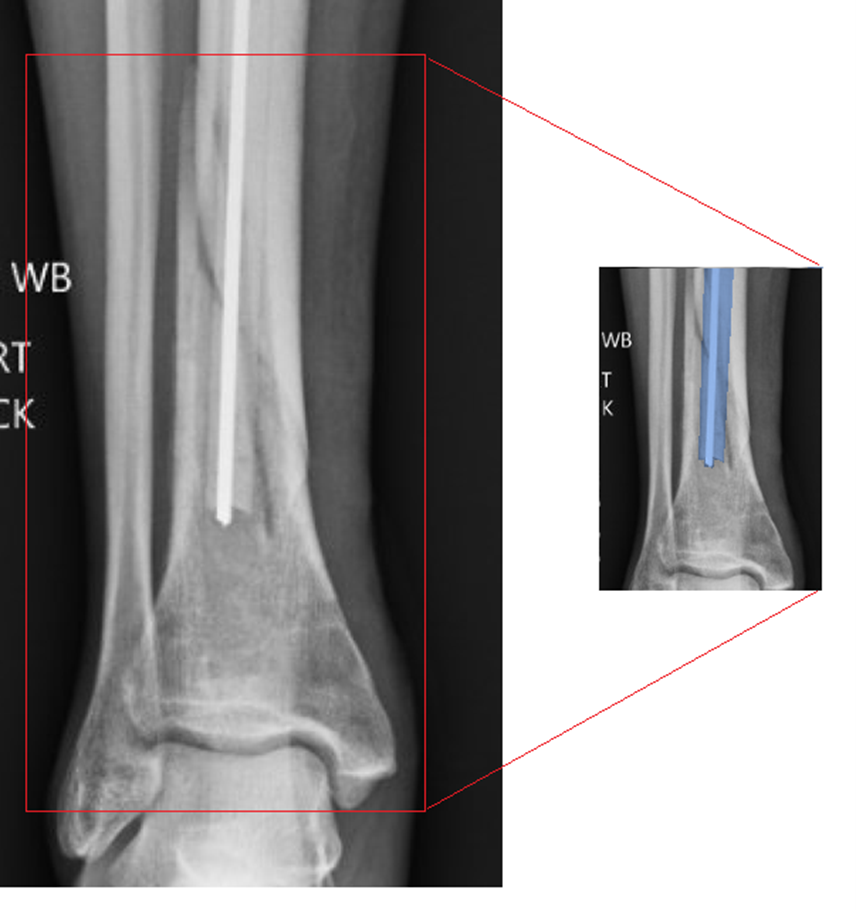 Figure 3: An x-ray showing tibial osteomyelitis treated with a rod composed of antibiotic-impregnated PMMA surrounding a ball tip guidewire. This construct provides for temporary stability. After the infection has cleared, the cement and wire will be removed and exchanged for a traditional intramedullary nail. (The density of PMMA is fairly close to that of cortical bone so it is not readily apparent to the untrained eye on routine x-rays; the callout to the right is to highlight it.)

RECAP: when bone is infected, the area is sequestered from the surrounding bone by the growth of new bone. This sequestration might prevent further spread of the infection but also prevents antibiotics from penetrating the infection. Debridement might therefore be needed.

As noted, antibiotics intended to treat the infection have difficulty reaching their target—but some antibiotics are better at penetrating bone than others. Penicillin, flucloxacillin, and metronidazole have lower than optimum penetration profiles into bone. Also, some antibiotics can be administered only intravenously, while others such as fluoroquinolones can be given in oral form. Although antibiotics may have trouble reaching the infected area and thus are limited in their ability to eradicate the infection, oral antibiotics may be used to suppress chronic osteomyelitis, to prevent it from worsening.  A nice review of antibiotic penetration into bone and joints is provided by Thabit, et al (https://pubmed.ncbi.nlm.nih.gov/30772469/ )