Metastasis is the process by which cancer spreads from its primary site of origin to other places in the body. Tumor cells escape from the primary tumor and travel in the blood stream or lymphatics to reach distal sites such as the skeleton.

Skeletal metastases from carcinomas are the most common malignant tumors involving bone (far more common than primary bone tumors, that is). Solid organ cancers most likely to spread to the bones include those of the breast, lung, thyroid, kidney, and prostate. Blood cell cancers such as lymphoma and multiple myeloma are also commonly seen.

Metastatic lesions are of course not made of normal bone tissue and therefore are at risk for a so-called pathological fracture. (The term “pathological fracture,” seemingly redundant, refers to fracture in a bone that is itself not normal, as discussed below.)

Typically, skeletal metastases are osteolytic (Figure 1): the tumor cells in the bone increase osteoclast activity, eroding the bone. This lysis of bone can cause pain, increase the risk of fracture, and produce hypercalcemia, as calcium is released from the breakdown of mineralized bone. 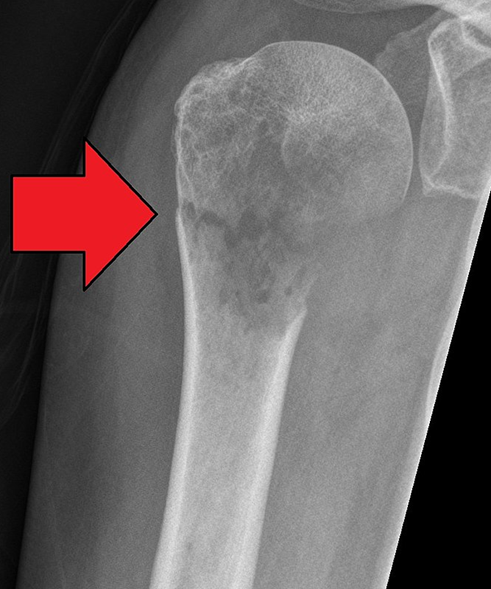 Figure 1: A renal cell carcinoma metastatic lesion to the humerus. There is a pathological fracture through this lytic lesion.

If a lesion is painful (Figure 2) and fracture risk is low, external beam radiotherapy alone may be used to provide symptomatic relief. It is also possible for patients with cancer to have diffuse skeletal pain without a focal lesion. For these patients, bisphosphonate medication can be effective. 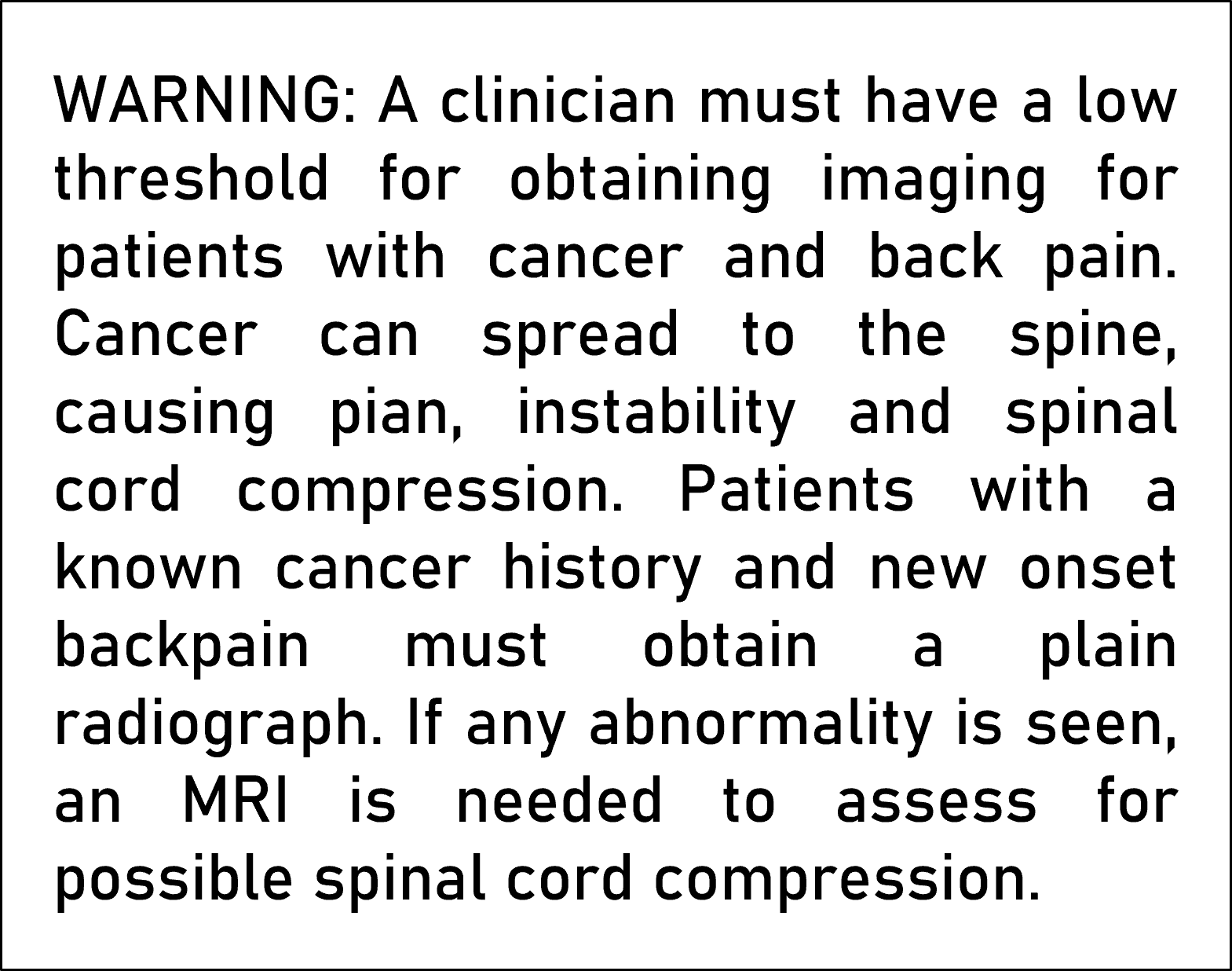 If there is a focal lesion that is at high risk for fracture, or worse, has fractured already, orthopaedic surgery intervention will be needed.

Treatment of an impending or established pathologic fracture draws on many of the techniques that have been developed for the treatment of ordinary fractures in normal bone. There are, however, several important differences that must be kept in mind, including the following:

Prior to treating a pathologic lesion in bone, it is essential to fully understand the lesion in question.

In a patient with numerous pre-existing bony metastases, it may be very reasonable to assume that a newly detected bone lesion is yet another a manifestation of the established disease. However, the first time a lesion is detected in bone, even if there is a prior diagnosis of a cancer, a tissue diagnosis of the lesion must be made by biopsy prior to definitive treatment (see Figure 3).

Consider, for example, a woman with known breast cancer who presents with a lytic lesion of the femoral shaft. It should not be assumed that the femoral lesion is a metastasis from the breast, even though breast cancer commonly spreads to the bone. Assuming that the bone lesion is a metastasis from the breast risks operating in what turns out to be a sarcoma of the femur or, say, a renal cell carcinoma. Notably, the operation used for a breast metastasis would spread sarcoma cells down the shaft of the bone and may lead to an extensive (and otherwise preventable) amputation. Likewise, operating on a renal cell cancer – a very vascular tumor – may lead to massive blood loss unless appropriate precautions (such as pre-operative blood vessel embolization, as discussed below) were taken. 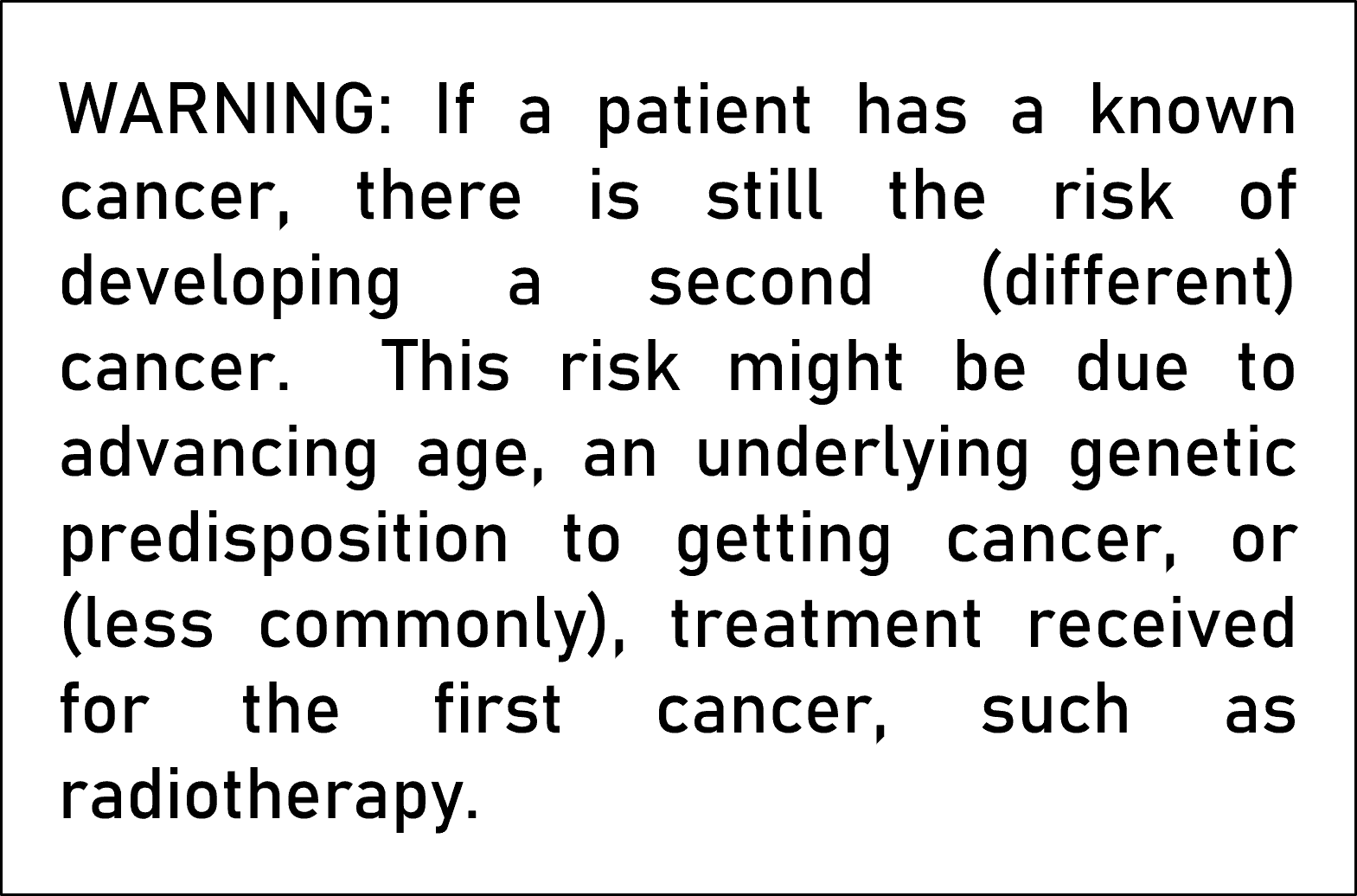 All biopsy procedures must be preceded by a thorough history, physical exam, laboratory investigations (e.g. complete blood counts, platelets, coagulation studies, among others) and imaging to evaluate the local anatomy (see Figure 4). 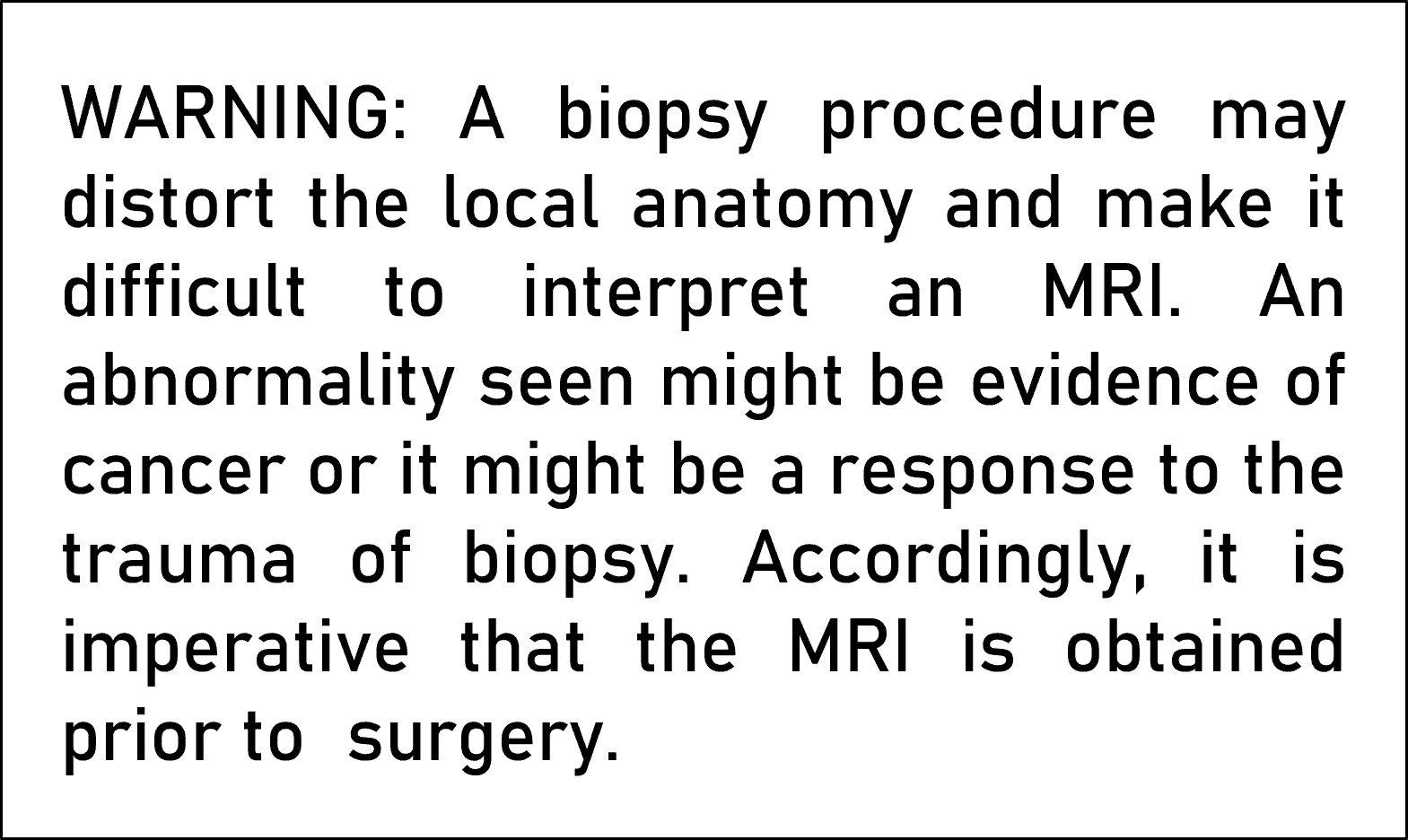 Most importantly, the biopsy should only be performed by members of a team with the expertise and capabilities to properly evaluate and treat the tumor.

There are several ways to establish a histologic (tissue) diagnosis of a particular lesion in bone. For small, deep lesions which would require significant surgical dissection to reach, needle biopsies (see Figure 5) are a reasonable first choice. The major challenge with needle biopsy is obtaining a specimen sufficient for the pathologist to make the diagnosis. 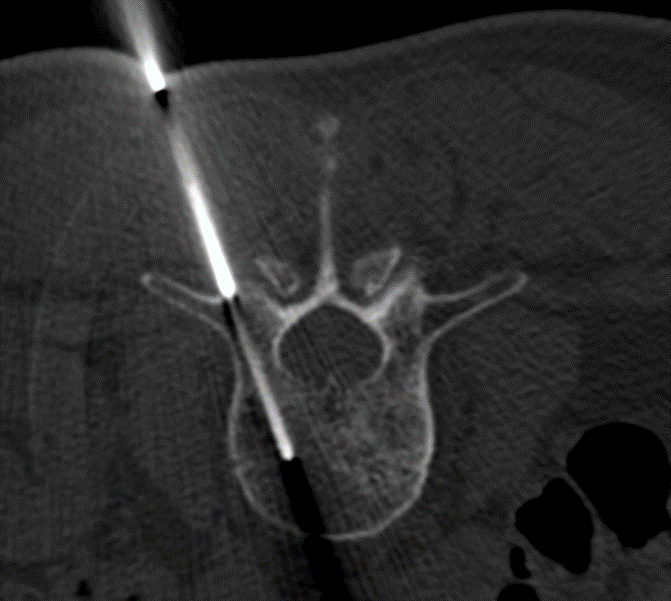 If a needle biopsy cannot be performed, or if it does not provide a diagnosis, open biopsy can be considered. Open biopsies should be performed in a manner that does not interfere with any subsequent surgery. Thus, the surgeon should use the smallest possible incision, and position it in line or with consideration with any incisions that might be used in a future procedure. Meticulous hemostasis should be maintained, with all efforts taken to not contaminate other structures.

It is advisable to obtain a frozen section at the time of the open biopsy, to make sure that sufficient tissue is available, even if a definitive diagnosis cannot be made on frozen section.

In many instances, patients with skeletal metastases will benefit from adjuvant treatment, that is, a treatment beyond the primary therapeutics for the metastatic lesion itself. The adjuvant treatment typically employs chemotherapy or radiation.

Patients with metastatic disease will frequently be on chemotherapy protocols for their primary diagnosis prior to fracture. If so, timing of surgery should consider the effect of chemotherapy on marrow suppression and wound healing. Ideally, surgery would be deferred until blood counts have rebounded to safer levels.

It is essential that once a pathologic fracture is fixed, some treatment – chemotherapy or radiation – is given to prevent local recurrence or progression.

Prophylactic fixation refers to operating on an impending pathologic fracture before it occurs to prevent the bone from actually breaking (Figure 6). The decision to operate can be complex, however. On the one hand, unnecessary surgeries are obviously to be avoided. On the other hand, sustaining a fracture is painful, and avoiding that pain is beneficial. In addition, prophylactic fixation surgery is usually less extensive than surgery to fix an already-broken bone and it is also likely to have a better outcome. Shared decision making is imperative. 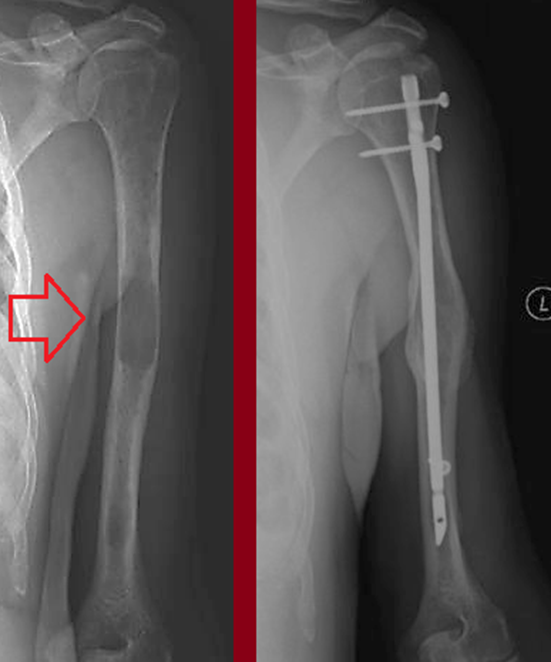 Figure 6: An impeding fracture of the humerus is shown in the image to the left (arrow). This was prophylactically fixed with a locked nail, as shown to the right. (Courtesy of Treatment of Pathological Humerus-Shaft Tumoral Fractures with Rigid Static Interlocking Intramedullary Nail-22 Years of Experience. Rev. bras. ortop. [online]. 2019, vol.54, n.2 https://www.scielo.br/scielo.php?script=sci_arttext&pid=S0102-36162019000200149)

To help identify those patients likely to benefit from prophylactic fixation surgery, the surgeon can calculate a “Mirel's score” (see Table 1). A score of 9 or above (on this 12-point scale) indicates a high risk of a lesion actually fracturing, hence represents an indication to fix the lesion prophylactically. 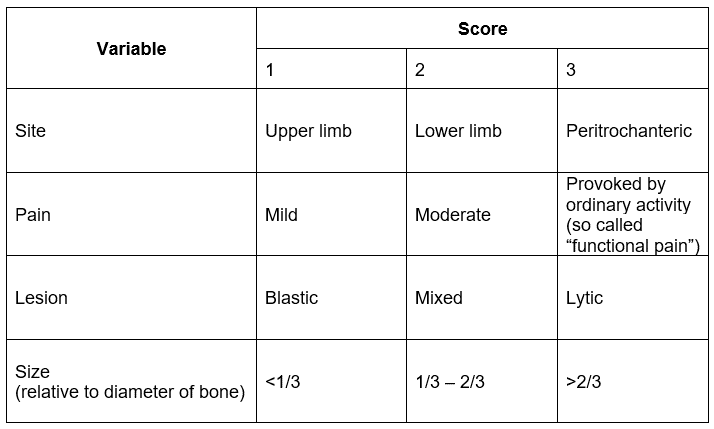 Table 1: The Mirel’s system, in which a score 1 to 3 is given in 4 categories. Thus the total score ranges from 4 to 12. A score of 9 or more is deemed to indicate prophylactic fixation.

It is also reasonable to operate because of the appearance of mechanical pain, that is, a marked increase in pain with load-bearing stress. Especially if an initial decision was made not to prophylactically fix a lesion, the onset of mechanical pain might prompt surgical treatment.

Before surgery, a bone scan and complete radiographs of the affected bone should be obtained to detect any additional lesions. A new fracture just beyond the edge of prior fixation is a surgical challenge best avoided. For this reason, a fixation device spanning the whole length of the bone, e.g., a long intramedullary nail, is often chosen.

Because patients with skeletal metastases usually have short life expectancies, it is particularly important that the surgeon establishes fixation that is strong enough for immediate weight bearing. “The surgical construction should be so strong that patients could push their stretchers back to the recovery room,” is the traditional teaching.

Most pathologic fractures will never heal normally, so there is no role for bone grafts or other biologic agents. Rather, all gaps should be filled with a generous application of bone cement or other material capable of structural support to provide cortical continuity.

Minimally invasive procedures have become popular for the treatment of ordinary fractures, but these techniques are less appropriate for pathological fractures. During surgery for a pathologic fracture, open reduction is often needed to best understand the anatomy at the fracture site and to detect (and fill) gaps at the fracture site.

There are, unfortunately, instances in which the tumor has damaged the bone so much that there is inadequate bone to hold the fixation device. In those cases, use of a segmental replacement prosthesis should be considered. A prosthesis provides immediate structural integrity with much less risk of failure (see Figure 7). 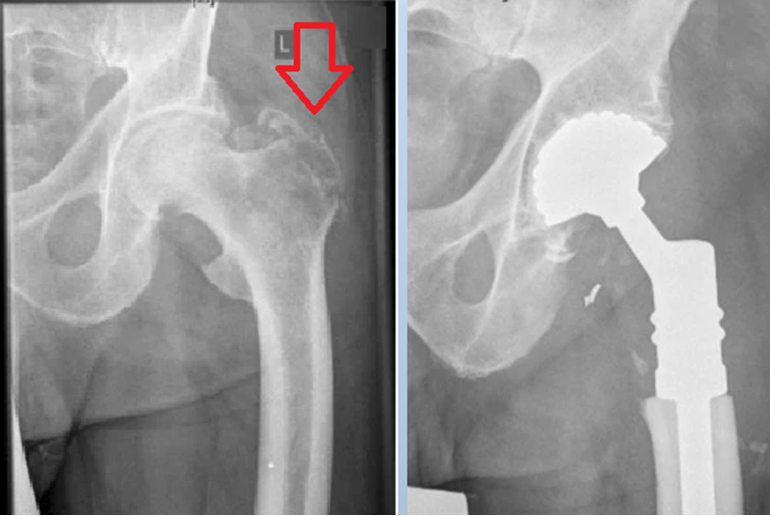 Figure 7: At left is a radiograph of the left hip of a 76-year-old male patient with a renal cell carcinoma metastasis and pathological fracture of the proximal femur. The x-ray to the right shows a modular proximal femur replacement after resection of the fractured proximal femur. (Reprinted from Henrichs, MP et al. Modular tumor endoprostheses in surgical palliation of long-bone metastases: a reduction in tumor burden and a durable reconstruction. World J Surg Onc 12, 330 (2014). https://doi.org/10.1186/1477-7819-12-330)

Mirel’s score was published in 1989, based on retrospective observations of patients with known lesions that did not undergo prophylactic fixation. Patients were noted to either progress to fracture or not. The score was seen to have high sensitivity (91%) but low specificity (35%). In other words, a low score can be used as a screening tool to identify patients at low risk for fracture, but a high score will capture both high and low risk patients. Indeed, if the score were used alone, up to two-thirds of patients could receive unnecessary prophylactic surgery. Furthermore, although the site of the lesion is included in the score, further work elucidated that site is in fact not an independent predictor of fracture. Another major limitation that the score can be used only for long bone metastases and not the very common spinal lesions. It is likely that as imaging modalities improve, and machine learning techniques be applied to large series of patients, future protocols will be more sensitive and more specific than the Mirel score.