Legg-Calve-Perthes disease, commonly known as Perthes disease, is a hip disorder affecting children that is caused by decreased blood flow to the head of the femur. This results in osteonecrosis (also known as “avascular necrosis”) of the proximal femoral epiphysis (femoral head), with resorption, reossification, and remodeling of the bone. Especially in children under the age of 6, Perthes disease may resolve without sequelae; in older children, however, the bone may fail to remodel to a normal shape leading to disruption of the articular surface and degenerative joint disease later in life.

The blood supply to the femoral head is made up of three arteries: the medial and lateral femoral circumflex arteries, and the artery of the ligamentum teres.

In Legg-Calve-Perthes disease, the blood supply is disrupted by an unknown process, and the bone cells begin to die. This process is termed osteonecrosis.

Loss of blood supply to bone results in ischemia and cell death. In turn, cell death leads to less bone remodeling and poorer structural properties of bone. These weaker properties increase the risk of collapse with load.

With time, new blood supply reaches the femoral head, and necrotic bone is removed. This results in fragmentation and reossification.

Notably, and in contrast to the adult form of idiopathic osteonecrosis, Perthes disease in younger children may resolve without sequelae. That is, the bone may remodel to a fairly normal shape with no lingering symptoms. On the other hand, the regenerated bone may also remodel to a non-spherical shape producing an abnormal range of motion, an irregular articular surface, and, ultimately, degenerative joint disease of the hip.

The exact cause of the disruption of the blood supply is not known, although it is believed to be multifactorial. Genetic abnormalities, trauma, coagulopathy, collagenopathy, hyperactivity, and passive smoking exposure are seen with higher prevalence in patients with Perthes, and are therefore thought to possibly have a causative role.

Another theory links systemic delay in growth and development to the development of Perthes. Delayed bone age has been seen among patients with Legg-Calve-Perthes disease, and therefore, endocrine dysfunction has been implicated as a possible cause.

The most common age of presentation for Perthes is about 8 years of age, though patients may be as young as 2 or as old as 12. (In patients 12 years of age or older, the natural history of the condition mirrors that of adult osteonecrosis.)

A history of trauma to the painful extremity is sometimes present.

Children with Legg-Calve-Perthes disease typically present with a limp that worsens with activity. Decreased range of motion and pain that radiates into the groin, proximal thigh, or knee are seen as well. There is loss of passive hip rotation on physical exam. Children may often conceal their limp or not complain of it, but parents and caretakers will notice it. In some cases, the child presents due to an unrelated trauma to the affected limb, and the disease is found incidentally.

Children with Legg-Calve-Perthes disease might exhibit an abnormal gait pattern in which they avoid abduction or internal rotation of the leg.

Additionally, in longstanding cases characterized by limited use of the leg over a prolonged period of time, atrophy may set in. Thus, the affected limb may be smaller than the contralateral side.

The definitive diagnosis of Perthes disease is made by x-ray. The disease is primarily classified by radiographic findings, using the Waldenstrom classification. The four stages of Perthes (Figure 1-4) are denoted as initial, fragmentation, reossification, and healed.

In the initial stage, the osteonecrosis process begins. The x-rays may show a dense and flattened femoral head with joint space widening. There may be only mild symptoms in this stage; parents may notice an altered gait or mild limp. 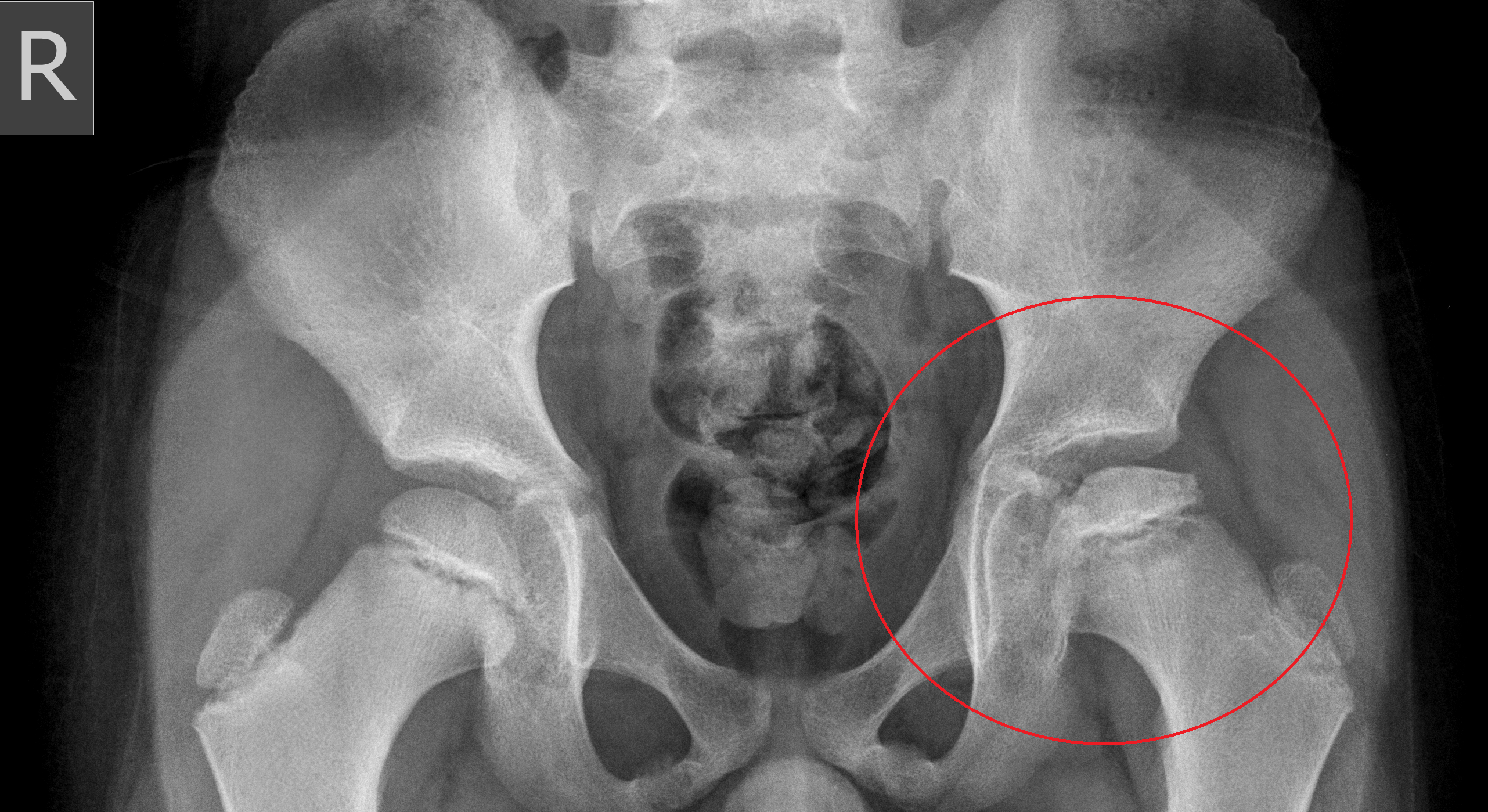 Figure 1: The initial stage of Perthes disease. There is irregularity of the left femoral head. (Figures 1- 4 are provided by Dr Wudbhav Sankar, Associate Professor of Orthopaedic Surgery at The Perelman School of Medicine/University of Pennsylvania and The Children's Hospital of Philadelphia)

The fragmentation stage is characterized by revascularization and bone resorption producing collapse. Hip symptoms are most pronounced in this stage, which may present for a year or longer.

Figure 2: In the fragmentation phase, the femoral head is resorbed and collapses.

In the reossification stage, new bone appears as the necrotic bone is resorbed. This is the longest stage and may persist for two years or more. 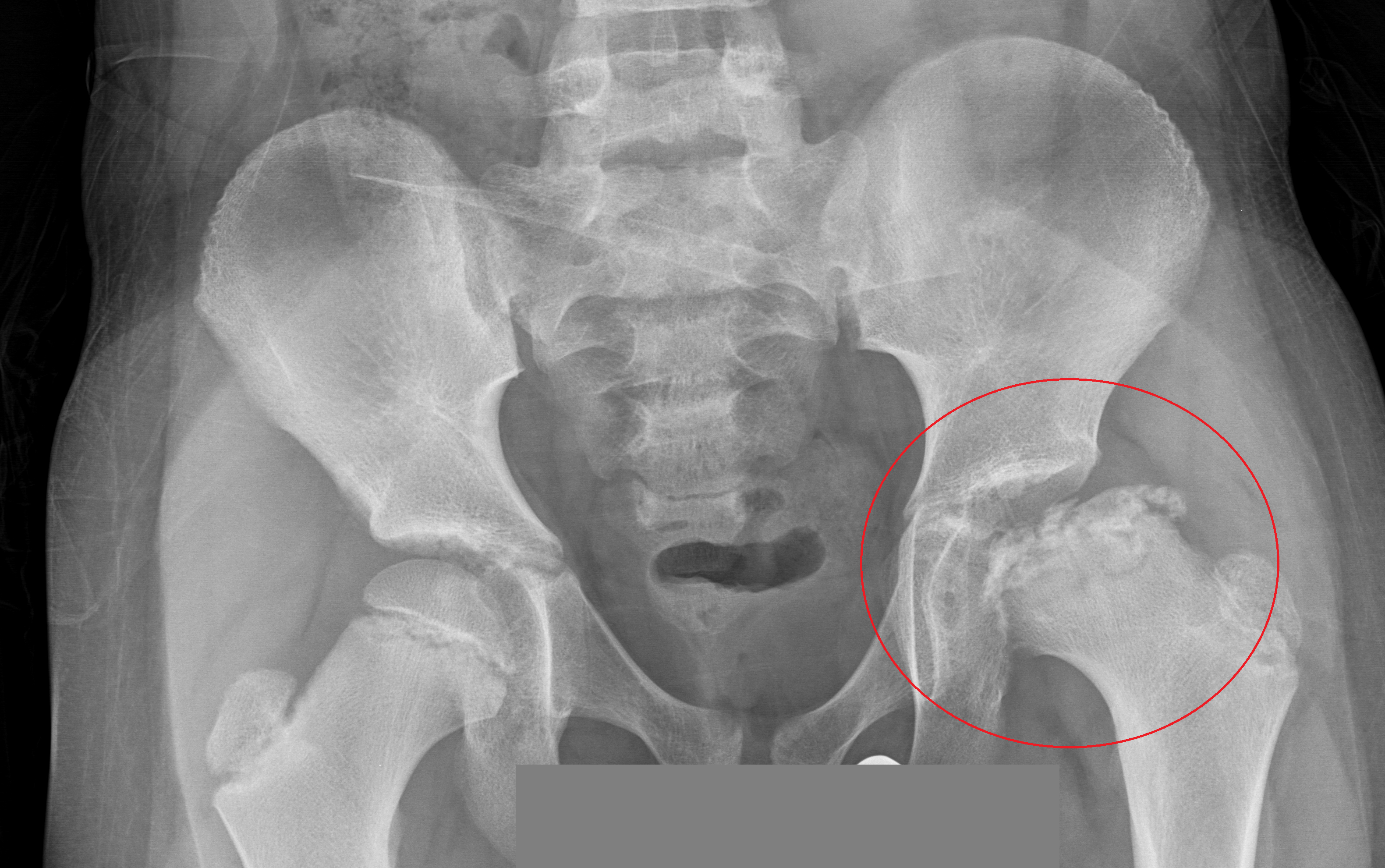 Figure 3: Perthes of the left hip in the third stage: re-ossification

In the final stage, the femoral head completes its remodeling. This stage is labeled the “healed” stage – a term that refers specifically to the completion of the bone’s response to the original insult. The word “healed” does not necessarily reflect the state of the hip joint overall. That is, although the osteonecrosis process may have ended and the fragmented areas have reconsolidated, symptoms may still persist and later degenerative changes may still appear if the shape of the femoral head has not been restored to normal. 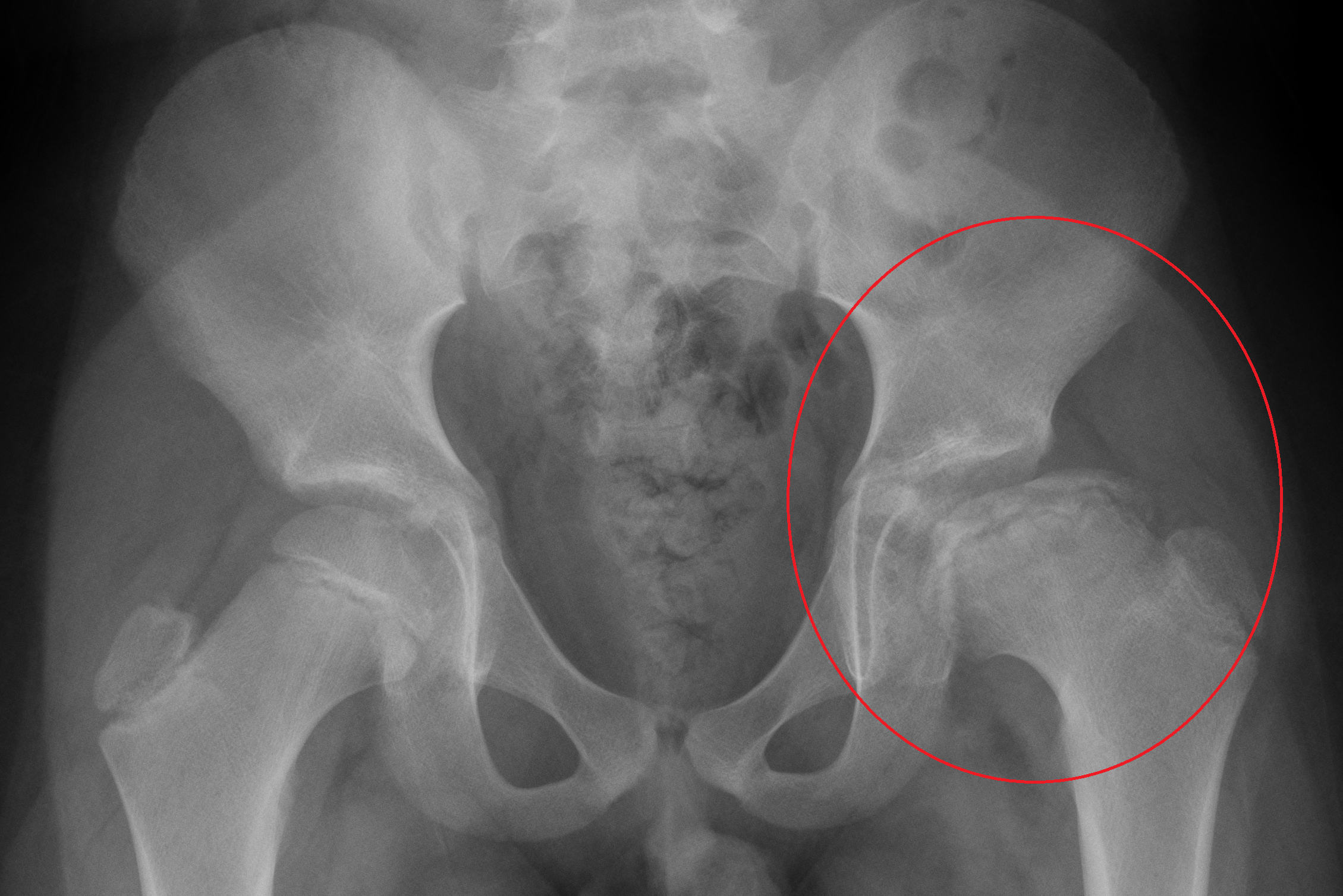 Figure 4: Perthes of the left hip in the fourth and final stage, in which the infarction is “healed.” As shown, however, the shape of the head has not been fully restored.

Other radiographic findings can include sclerosis and flattening of the acetabulum.

Another option for imaging is MRI, which has a higher diagnostic accuracy than x-ray, especially in the initial stage when radiographic findings may not be obvious. Scintigraphy is a method which uses Technetium scanning and can be helpful for diagnosis in the earliest stages of disease.

Laboratory findings are used in the diagnosis of Legg-Calve-Perthes disease primarily to rule out other diseases or illnesses. All laboratory values are typically within normal limits.

Legg-Calve-Perthes disease is a relatively rare disease, with a prevalence of approximately 1 in 10,000 children, but can have devastating long-term consequences on the child’s mobility and quality of life.

The age of onset of Legg-Calve-Perthes disease is most commonly between 4 and 8 years old. In general, it occurs in children under the age of 15 years old. Boys are more commonly affected, with a ratio of male to female of approximately 5:1. In about 10% of all cases, both hips are affected.

As Perthes is an idiopathic (cause-unknown) disease, diagnoses are made only after all other known causes of osteonecrosis have been ruled out. These include hemoglobinopathies, like sickle cell disease or thalassemia, leukemia, lymphoma, idiopathic thrombocytopenic purpura, or hemophilia. Secondary causes of osteonecrosis such as a history of corticosteroid use, traumatic dislocation, septic arthritis, or untreated developmental dysplasia of the hip should be ruled out as well.

The presence of bilateral osteonecrosis is suggestive of other disease processes, such as multiple epiphyseal dysplasia. A child with a limp can also be the presentation for septic hip arthritis or a slipped capital femoral epiphysis, both of which should be promptly diagnosed. Additionally, symptoms such as fever, anemia, or leukocytosis should not be missed as these can be clues for ruling out other important conditions.

Treatment of Legg-Calve-Perthes disease is guided primarily by the stage of disease (itself usually correlated with patients' age).

The main goal of treatment is maintaining range of motion and containment of the femoral head within the acetabulum. By achieving these goals, one can prevent or minimize deformity of the joint, and achieve greater long-term function.

“Containment” minimizes loss of sphericity as the bone remodels. Containment can be achieved either operatively or nonoperatively.

Nonoperative management of Perthes centers on offloading the hip. If the disease is in the fragmentation phase, the child should be non-weight-bearing. Motion is maintained by daily exercises at home or with physical therapy. Containment can be also achieved with the use of an abduction brace or Petrie cast (Figure 5).

Figure 5: Application of a Petrie Cast to maintain abduction and promote containment.

In some cases, operative treatment is needed to promote motion with soft tissue releases, or to improve containment with an osteotomy (Figure 6). 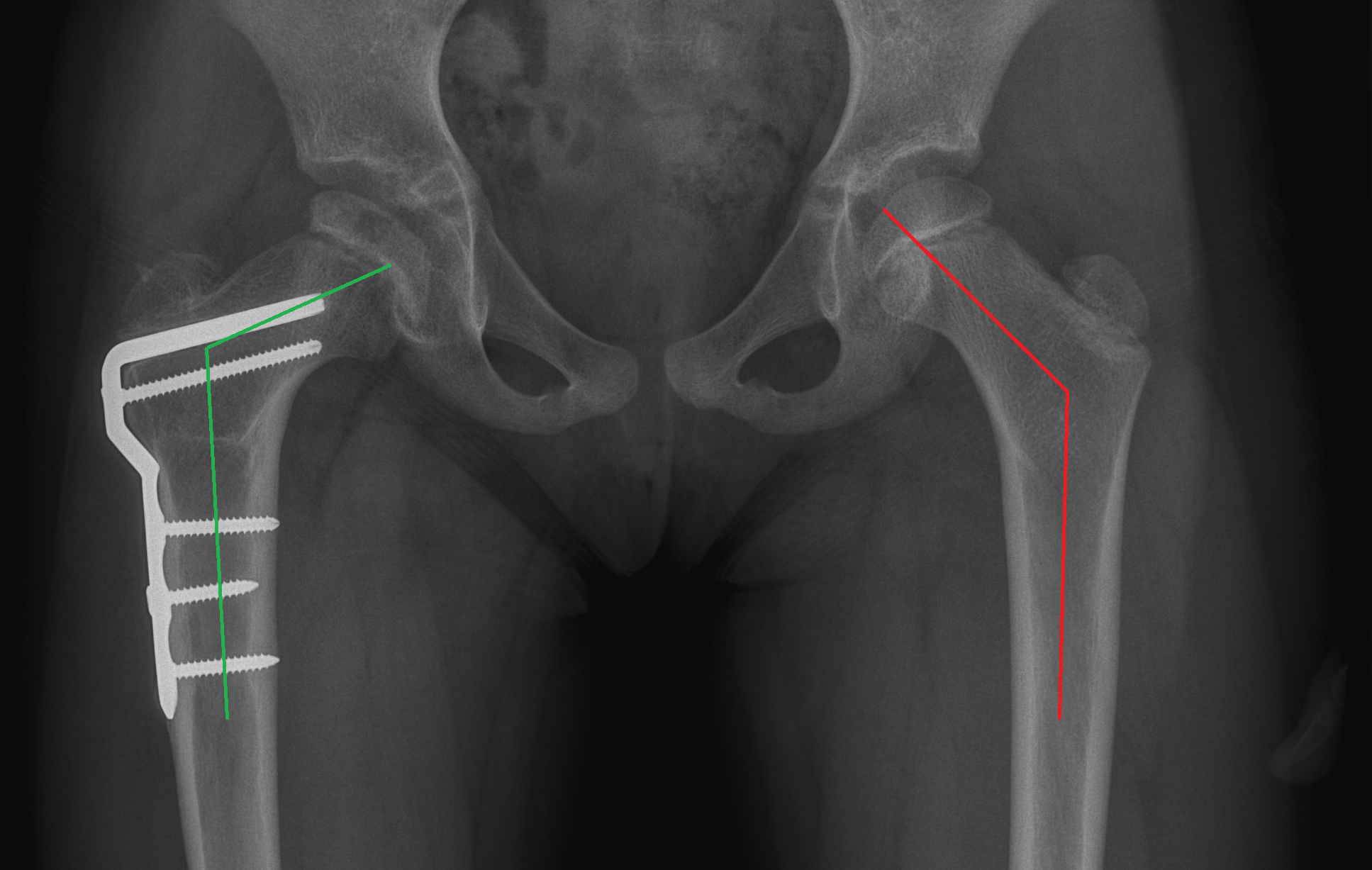 Figure 6a: An x-ray of a varus osteotomy for Legg-Calve-Perthes Disease. The normal neck-shaft angle is shown in red in the left hip; the new smaller (varus) angle on the right is shown in green. 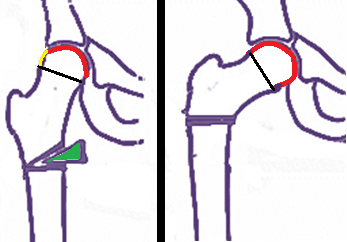 Figure 6b: As shown in the schematic, some of the head is not contained in the acetabulum (yellow region). Cutting out a wedge of the bone (green triangle) will produce a smaller angle between the femoral neck and shaft. This will redirect more of the head into the acetabulum. This greater contact between the ball and the socket will help mold the femoral head into its proper rounded form.

Overall, the long-term prognosis for children with Perthes is good; most children are able to return to daily activities without symptoms or limitations.

A few proposed risk factors include passive exposure to smoke and hyperactivity, although there is no known mechanism linking these risk factors to the development of Legg-Calve-Perthes disease.

Although the exact cause of Perthes disease is unknown, many environmental and holistic risk factors have been proposed. One association has been noted between Perthes and attention deficit-hyperactivity disorder. Additional investigation is also being carried out regarding Perthes and the role of nutrition.

Perthes disease was first described by Henning Waldenstrom. (Dr. Waldenstrom believed the condition was a variant of tuberculosis. The disease is named after the three physicians who independently found that it was not related to tuberculosis: Arthur Legg, Jacques Calve, and Georg Perthes.) Legg-Calve-Perthes disease thus follows “Stigler's Law of Eponymy,” which asserts that no scientific discovery is named after its original discoverer. (Indeed, although the law was named by Stephen Stigler, it was discovered by the sociologist Robert K. Merton.) Note that Henning Waldenstrom was not the discoverer of the eponymous Waldenstrom’s Macroglobulinemia; that was Jan G. Waldenstrom, his son.

Be able to complete a history and physical exam of the hip in a child. Interpret an x-ray of Perthes.