Gout and pseudogout are diseases caused by deposition of crystals - so-called crystalline arthropathies - producing recurrent attacks of acute inflammatory arthritis. Gout is caused by an imbalance in uric acid intake, synthesis or excretion, that leads to the periodic deposition of monosodium urate crystals in joints. Pseudogout has a similar clinical presentation but calcium pyrophosphate dihydratre (CPPD) is the characteristic crystal causing the disease. Gout is subject to flares and periods of remission, but over time, repeated gouty flares can cause enduring joint damage. Gout usually affects one joint at a time, often the metatarsophalangeal joint of the great toe.

Uric acid is the final breakdown product of degradation of the purines (Figure 1).

Figure 1: Purine metabolism (modified from https://doi.org/10.3389/fmed.2018.00160). The conversion of xanthine to uric acid, shown by the green arrow, is catalyzed by xanthine oxidase. This step can be inhibited by Allopurinol, a medication commonly used for the treatment of gout.

Hyperuricemia, namely elevated uric acid in the blood, can be caused by increased purine breakdown or reduced elimination by the kidney. When the concentration of uric acid in blood is elevated beyond about 6.8 mg/dL, it can precipitate as monosodium urate crystals (see Figure 2). 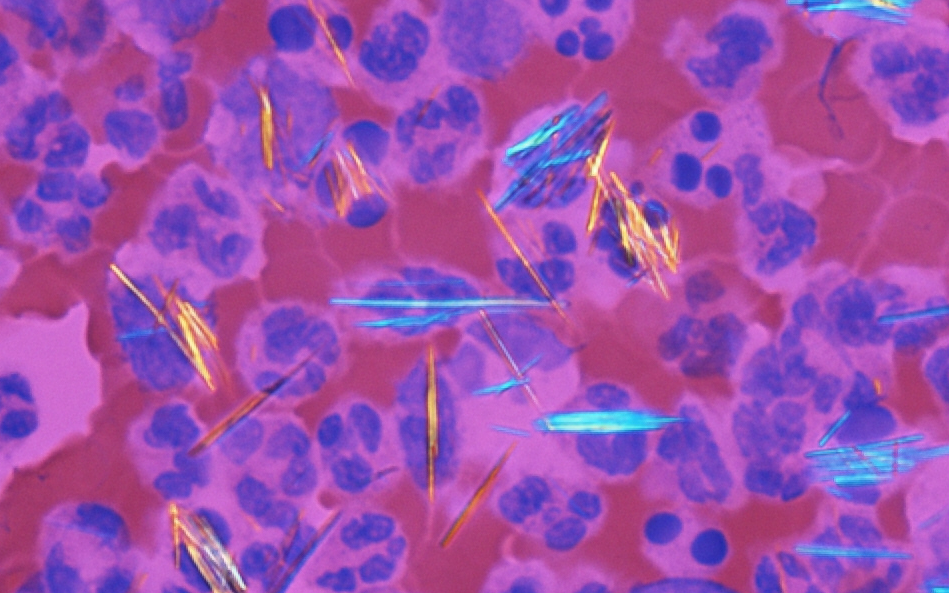 A common location for monosodium urate deposition is the first metatarsophalangeal joint (possibly related to its lower body temperature), but the hand, wrist and knees - indeed any joint - can be involved. These monosodium urate crystals can also deposit in soft tissues and form masses known as tophi.

Pseudogout is caused by the deposition of calcium pyrophosphate dihydrate (CPPD) crystals in the joints. The cause of CPPD crystal deposition is not well understood. There are associations with underlying metabolic disorders such as hyperparathyroidism and hemochromatosis (CPPD deposition seen in 40% of cases), as well as with local joint trauma. There may also be a hereditary component as well. Common locations of pseudogout include the knees, wrist, and pelvis.

Both crystalline arthropathies have acute and chronic phases. Acute attacks lead to an inflammatory response. Monosodium urate crystals are phagocytosed and initiate a cascade resulting in the release of proteases, prostaglandins, leukotrienes, and formation of oxygen free radicals. Pseudogout presents similarly. Chronic gout develops as the result of frequent and recurrent acute episodes resulting in the formation of crystal deposits called tophi.

In an acute gout attack, a single joint – the first metatarsophalangeal (MTP) joint most likely – becomes inflamed, painful, hot, erythematous, and swollen. Initial attacks begin with monoarticular involvement and can become polyarticular over time if untreated. Attacks often occur in the early morning and symptoms increase rapidly over the ensuing 24 to 48 hours. Patients describe pain with any movement of the joint as well as hypersensitivity to the touch of the affected area. The erythema and swelling of the joint or affected area make distinguishing a crystalline arthropathy from cellulitis or septic arthritis clinically difficult. Gout may also cause acute bursitis or tenosynovitis of structures located around the affected joint.

Gout of the 1st metatarsophalangeal joint of the foot (Figure 3) is known historically as “podagra.” Other lower extremity joints involved include knee, ankle, and midtarsal joints. Gout is less commonly seen in the upper extremities. 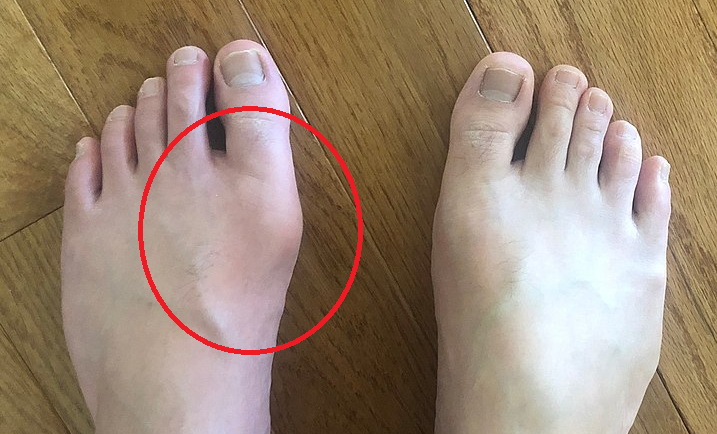 Figure 3: Swelling and erythema of the left 1st metatarsophalangeal joint in a patient with gout. (Modified from https://commons.wikimedia.org/wiki/File:Gout_Comparison.jpg)

Pseudogout is more likely to involve the upper extremity such as the wrist, as well as more proximal joints such as the knee.

In between gouty attacks, patients are at first remarkably unremarkable: they have no symptoms and normal joint examinations. In patients with longstanding gout, crystal deposits can be seen over the soft tissue near the interphalangeal joints of the hands (Figure 4) and feet, olecranon process, and the helix of the ear. This is known as chronic tophaceous gout. If left untreated, chronic tophaceous gout results in periarticular erosions and joint destruction resulting in end-stage arthritis. Tophi can also be found is the subcutaneous tissues, which can resemble rheumatoid nodules. 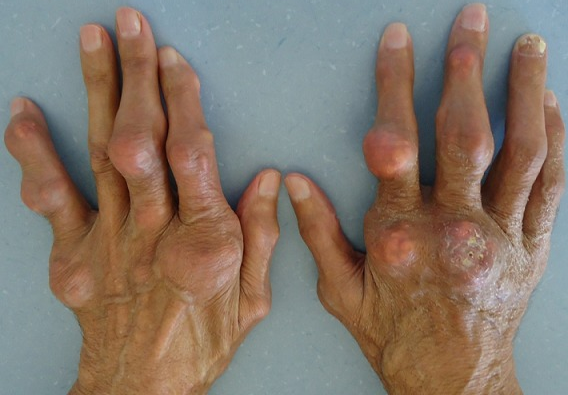 The diagnosis of gout is established if there are monosodium urate crystals found in synovial fluid or tophi. In the absence of that “gold standard” evidence, gout can be diagnosed clinically based on a combination of findings such as asymmetric swelling within a joint on radiograph, 1st metatarsophalangeal joint tenderness or swelling, hyperuricemia greater than 6mg/dL, redness over observed joint, among others. (See for example 2015 Gout Classification Criteria: An American College of Rheumatology/European League Against Rheumatism Collaborative Initiative https://onlinelibrary.wiley.com/doi/full/10.1002/art.39254.)

Laboratory studies include basic labs such as a complete blood count as well as inflammatory markers. Patients may have leukocytosis and fever, which may make distinguishing gout/pseudogout from infection difficult.

Hyperuricemia may be seen, however a normal serum uric acid level does not exclude an acute gout attack. Likewise, asymptomatic hyperuricemia is common and does not always present as gout clinically.

Radiographs should be obtained of the affected joints. Asymmetric swelling on radiographs is a specific finding, but is often absent (low sensitivity). Chronic gout will demonstrate periarticular erosions with sclerotic overhanging borders (Figure 5). Tophi may be seen on radiographs as well. 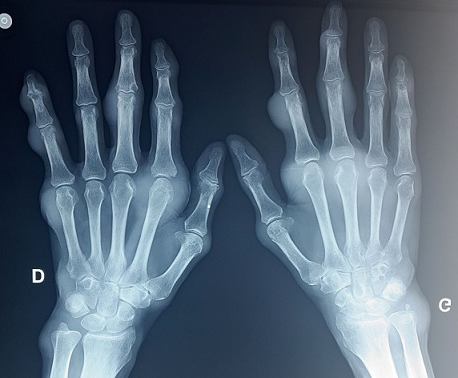 Figure 5: Radiograph of both hands of the patient shown in Figure 4, demonstrating soft-tissue swelling and periarticular erosions in metacarpophalangeal and interphalangeal joints. (Courtesy of Pan Afr Med J. 2015; 22: 132.)

Pseudogout can be diagnosed with the radiographic findings of chondrocalcinosis, namely calcification of cartilaginous structures. This is often seen in the menisci of the knee (see Figure 6), the triangular fibrocartilage complex of the wrist, the hip labrum, or annulus of the intervertebral discs. 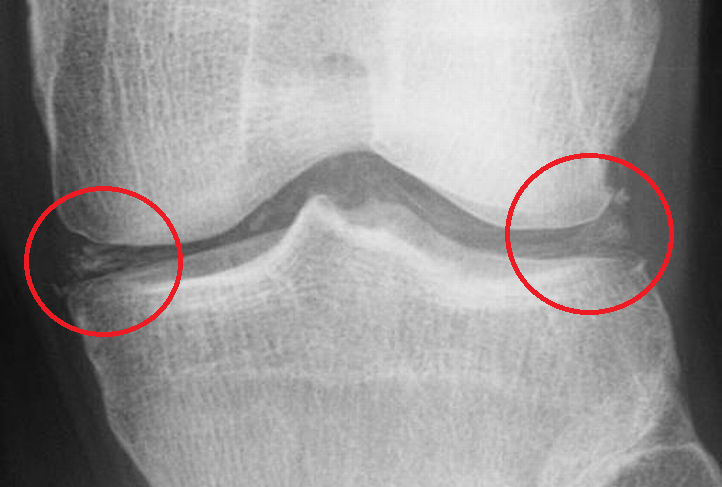 Normal synovial fluid will be clear or yellow and transparent, have fewer than 200 WBC/mm3 and no crystals; the gram stain and cultures should be negative as well. Inflammatory arthritis, including gout and pseudogout, will result in synovial fluid that is cloudy with an elevated white cell count. Patients with gout or pseudogout will have crystals in their fluid, with a negative gram stain and cultures.

Septic arthritis presents very similarly to gout. If a septic cause is suspected, it must be ruled out through arthrocentesis. Septic arthritis fluid will be cloudy or purulent and analysis will demonstrate often demonstrate more than 50,000 WBC/mm and have a positive gram stain and cultures. Typically, fluid will not have crystals, but the presence of crystals does not exclude the diagnosis of concomitant septic arthritis. It is also possible that gout will have white cell counts in excess of 50,000 WBC/mm.

Cellulitis presents as superficial erythema, pain, and swelling. Often times there is a break in the skin which leads to the infection. Cellulitis can be seen overlying a joint with gout, as desquamation of skin can occur in the area. The swelling may be associated with the affected joint, but may also extend proximally or distally from the joint.

Bursitis can be a rival diagnosis or can be present as the result of gout. Crystals can deposit within the bursa, causing inflammation, swelling, and pain. Isolated bursitis presents as superficial bogginess and swelling over the joint.

Periarticular or articular fractures can be ruled out with radiography.

Osteoarthritis can present similarly to a gout flare. Diagnosis can be made with careful history and exam, as well as with radiographs. Gout and especially pseudogout can be present with osteoarthritis, and joint aspiration can be useful for diagnosis.

The presence of crystals does not exclude a septic joint. Cell count and differential, gram stain, and cultures should be used to rule out a septic joint. In certain clinical situations, empiric treatment for septic arthritis may be initiated while awaiting the results of bacterial cultures.

Once diagnosed, the goals for treatment of gout are control of symptoms, risk factor modification, and prevention of recurrence, and the development of chronic gout.

First line interventions for gout include NSAIDs and corticosteroids. Indomethacin, naproxen, and suldinac are common NSAID options. They function by inhibiting phagocytosis of crystals and decreasing the inflammatory response.

Intra-articular corticosteroids injections a reasonable option for acute relief. Steroids should be avoided in patients with septic joints, and must be carefully used in diabetics at risk for hyperglycemia.

Given the high rate of recurrent flares, treatments to address hyperuricemia should be started after the initial gout episode. Dietary modifications, including reducing red meat and seafood, and reducing alcohol intake, should be followed. Altering diuretic therapies to other antihypertensives that do not alter renal function can help as well.

For patients with persistent disease, medications are recommended. Allopurinol is the first line urate-lowering medication. Its action is to inhibit xanthine oxidase, lowering production of uric acid from purines (see Figure 1).

If allopurinol cannot be used or if it is found ineffective, Probenecid can be tried. This medicine promotes excretion of uric acid through the kidneys, therefore requires adequate kidney function to work effectively. (Probenecid is not indicated for patients at risk of kidney stones; determining this might require 24-hour urinary uric acid testing.) Febuoxostat, a non-purine xanthine oxidase antagonist, is an option for patients with renal inefficiency who are unable to use Probenecid.

End stage arthritis can be addressed surgically with arthroplasty or fusion if appropriate.

The treatment for acute pseudogout attacks is similar to that of gout, with NSAIDs and corticosteroids being mainstay of treatment. Chronic pseudogout can be managed with prophylactic colchicine.

Risk factors for primary gout include a purine rich diet, alcohol abuse, obesity, and diuretic use. Red meat and seafood consumption increase the risk for an acute gout flare. Secondary gout is seen with diseases of high metabolic turnover, such as psoriasis, hemolytic anemias, leukemias, and patients undergoing chemotherapy. In addition, infections, trauma, and surgery can trigger flares.

Pseudogout tends to show a higher predisposition to elderly patients, and it is rarely seen as a primary finding in younger patients without concomitant diseases. CPPD crystal deposition is associated with hemochromatosis, hyperparathyroidism, systemic lupus erythematosus, gout, rheumatoid arthritis, Wilson’s disease, hemophilia, and long term dialysis. Asymptomatic chondrocalcinosis is found in 7% of the general population.

Dietary modifications including reducing red meat and seafood, and reducing alcohol intake are first line steps to preventing recurrences. Both work by lowering the uric acid concentration in the blood. Choosing diuretic therapies, if needed, to those that do not affect renal function can help as well, as this can help promote excretion of uric acid.

Medication prophylaxis can be used in the setting of cancers and those at risk for tumor lysis syndrome.

Most animals produce a urate oxidase enzyme, uricase, which converts uric acid into a form more readily excreted in urine. Humans (and higher primates) lack this enzyme. We thus excrete uric acid directly and are prone to gout when the excretion is incomplete.

The term gout is derived from the Latin word gutta, meaning a drop of liquid. Randolphus of Bocking in 1200 AD initially coined the term, referring to “dropping of morbid material from the blood in and around the joints” (see Figure 7).

Historically, gout was known as “the disease of kings,” and a “rich man’s disease,” as the condition was more prevalent among those who could afford to eat and drink in excess. 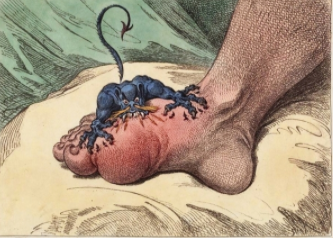 Figure 7: The Gout, by James Gillray in 1799. (Reproduced from wikimedia.org)