Fractures of the Growth Plate (physis)

The physis, or growth plate, is a complex cartilaginous structure that is responsible for longitudinal growth of the skeleton. In order to allow for bone growth, the physis is not fully ossified. That makes it an area of weakness and prone to fracture.

Long bones in children have four distinct segments (Figure 1): The epiphysis is the region of bone adjacent to the joint surface. Below it lies the physis, the area where growth occurs. Distal to that is the metaphysis, a flared region of bone, and below that lies the narrower shaft of the bone, or diaphysis. (A nice way to remember the meaning of these terms is to consider the etymology: “physis” means “origin” (of bone); “epi” means “above”; “meta” means “beyond”;  and “dia” means “through” or “towards”. 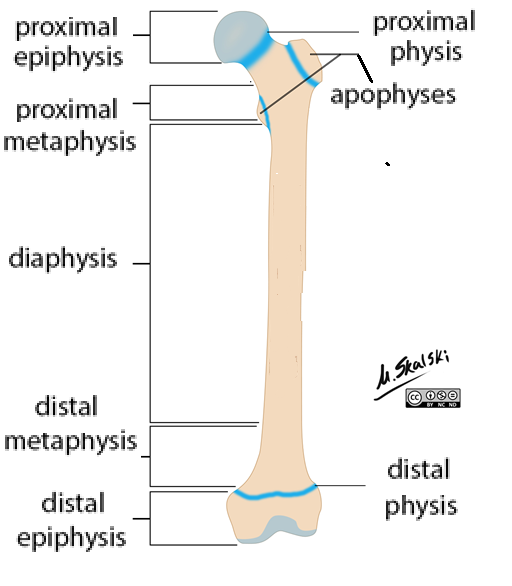 Figure 1: Bone segments of the femur. As the figure makes clear, in a long bone there is only one diaphysis, but there can be physes and associated regions at both ends. Also shown are the apophyses, the growth plates of the secondary growth centers where tendons attach [In the proximal femur, these will become the trochanters.] (Modified from Dr Matt Skalski, Radiopaedia.org. From the case https://radiopaedia.org/cases/29729)

The physis is found between the epiphysis and the metaphysis. Here cartilage cells progress through a series of layers and mature to create new bone that is added to the metaphysis. The physis itself can be broken down into four zones, beginning at the epiphysis and ending with new bone formation at the metaphysis (Figure 2). The germinal or reserve zone contains chondrocytes, or cartilage cells, in a relatively quiet state that will serve as the source of cells for growth. In the proliferative zone, the cells begin to divide, flatten, and form columns. Next, in the hypertrophic zone, the cells grow, mature and spread out as they produce additional extracellular matrix. This is the weakest layer of the growth plate and the most common location of physeal fractures. Finally, in the zone of provisional calcification the cartilaginous matrix begins to calcify, and immature bone formation occurs. 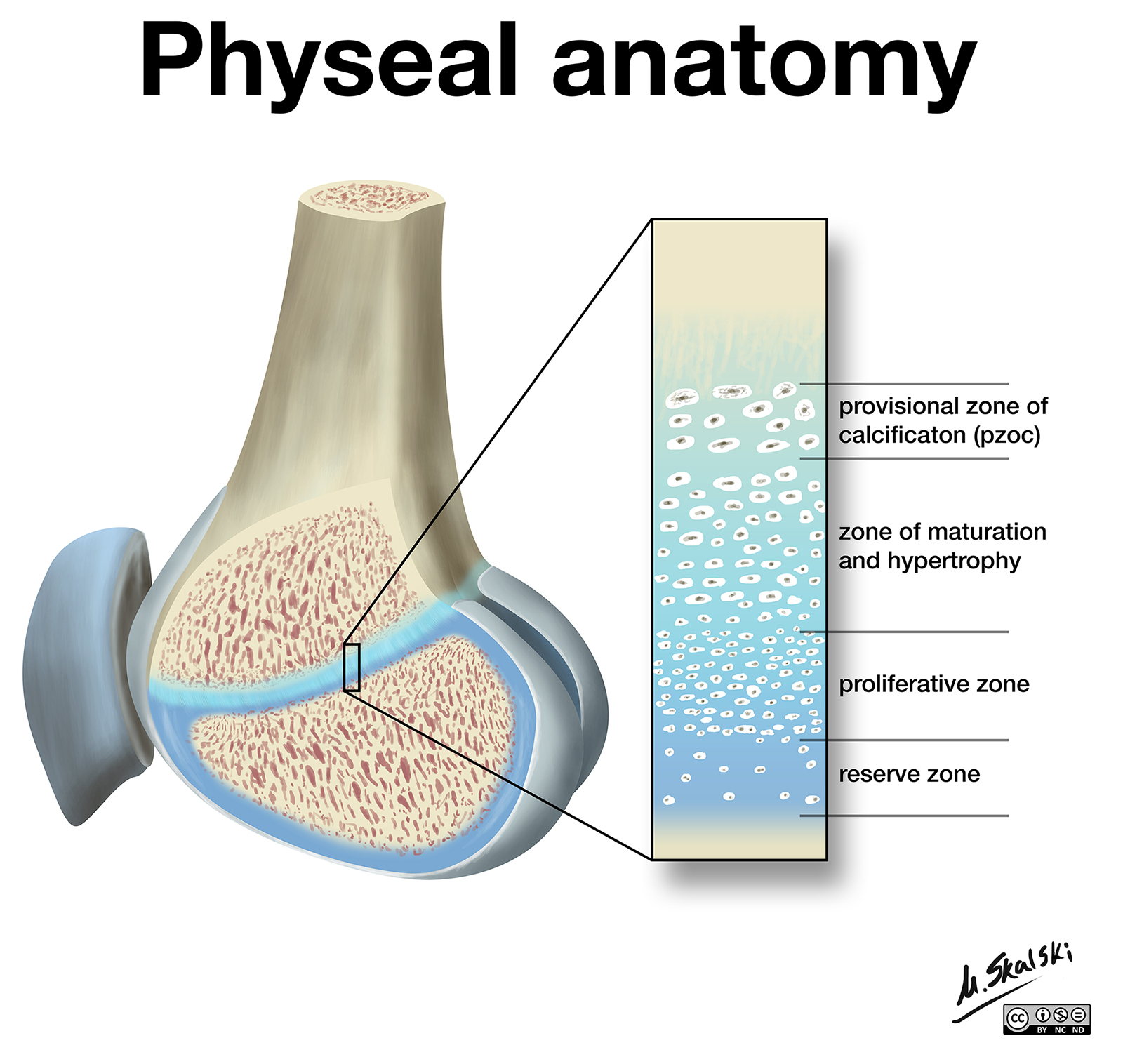 Horizontal growth also occurs at the physis, through a circumferential collection of immature cells at the periphery known as the Node (or groove) of Ranvier. Overlying this is a layer of strong fibrous tissue that stabilizes the physis by connecting the epiphysis to the periosteum of the metaphysis, known as the perichondral ring of LaCroix. Blood supply to the growth plate comes from several sources. Epiphyseal vessels supply the resting and proliferative zones. Additionally, metaphyseal-sided blood supply comes from perforating metaphyseal and diaphyseal intramedullary nutrient vessels. There is also a perichondral artery that enters at the Node of Ranvier. Damage to these blood vessels can contribute to growth arrests that occur after fractures through the growth plate.

Physeal fractures make up 15-30% of all fractures in children. They are more common in boys than in girls (2:1), and occur more frequently in adolescents during periods of rapid growth when the physis is weaker. Growth plate fractures are typically the result of trauma and often occur due to falls engaging in sports and other recreational activities. Physeal fractures can, however, be caused by high energy mechanisms as well as physical abuse. The physis is an area of weakness and is less resistant to stress than the surrounding bone, ligaments, and other soft tissues. As such, mechanisms of injury that in an adult would cause sprain ligaments more likely will cause physeal fractures in skeletally immature patients.

Patients presenting after mechanisms of injury suggestive of physeal fractures report pain at the end of the bone (near the joint), an inability to use or put weight on the extremity, and possible visible deformity. The skin should be carefully examined for signs of soft tissue injury including bruising, swelling, bleeding, open wounds, and exposed bone. The joints above and below the area of suspected injury should be palpated and brought through a range of motion as pain allows. Particular attention should be paid to confirming the presence of distal pulses and capillary refill and whether they are symmetric to the contralateral side. As with all orthopaedic injuries, it is important to evaluate for other associated injuries by checking for tenderness, deformity, crepitus, and pain with range of motion in all four extremities, the pelvis, and spine. Biplanar radiographs, typically anterior-to-posterior and lateral views, should then be obtained.

There are several classification systems describing physeal fractures, however Salter-Harris is the most commonly used (Figure 3). It describes the anatomic location of the fracture while also providing prognostic information for outcomes and complications. The Salter-Harris classification of a given fracture is determined by following the path of the fracture line through the physis and the surrounding metaphysis and epiphysis bone segments. 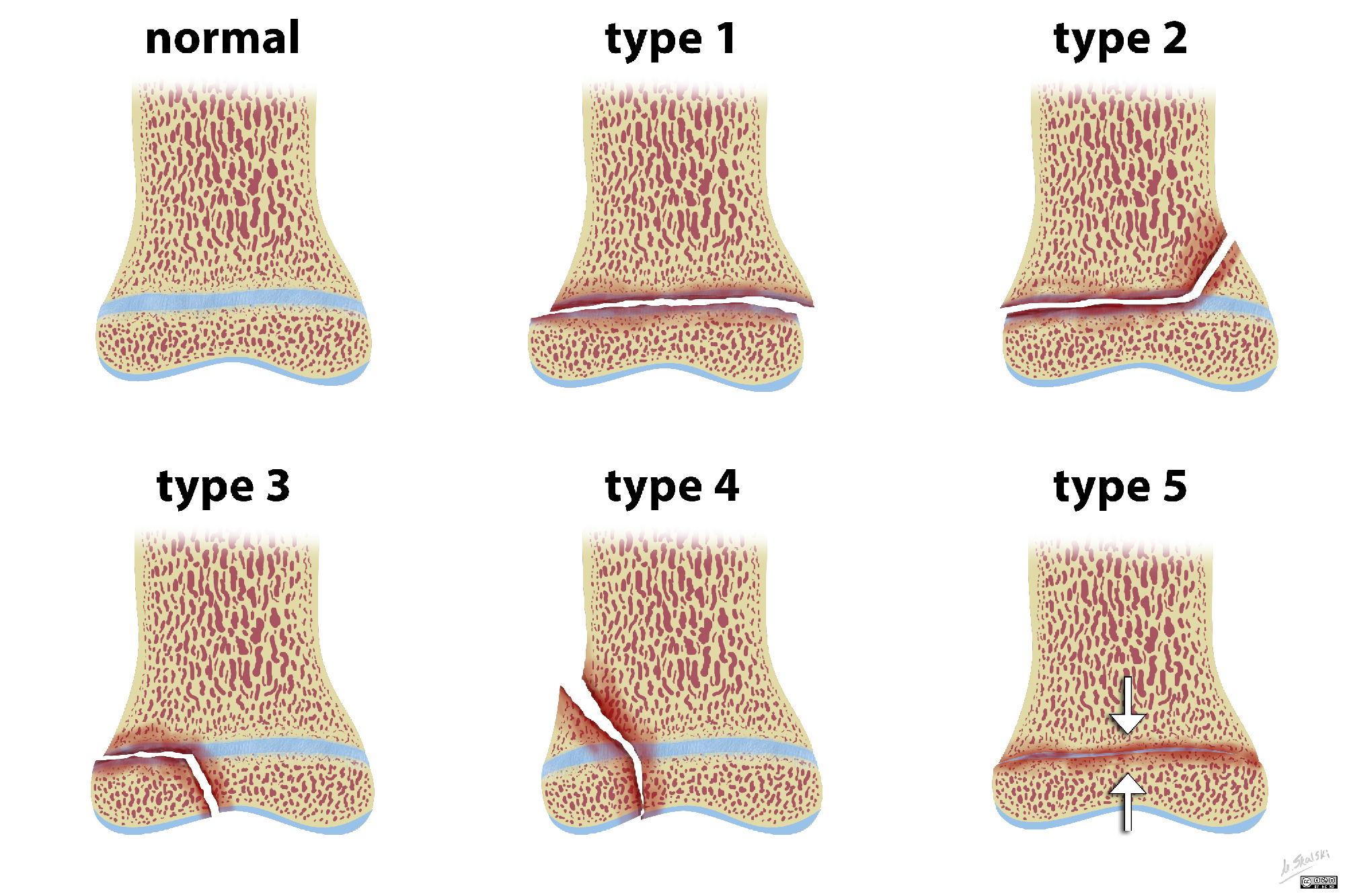 Type I - The fracture travels transversely through the growth plate. Also known as a physeal separation, there is no extension into the metaphysis or epiphysis (Figure 4). If non-displaced, they can be difficult to diagnose on radiographs. In these cases, tenderness directly over the growth plate is the best indication of injury. 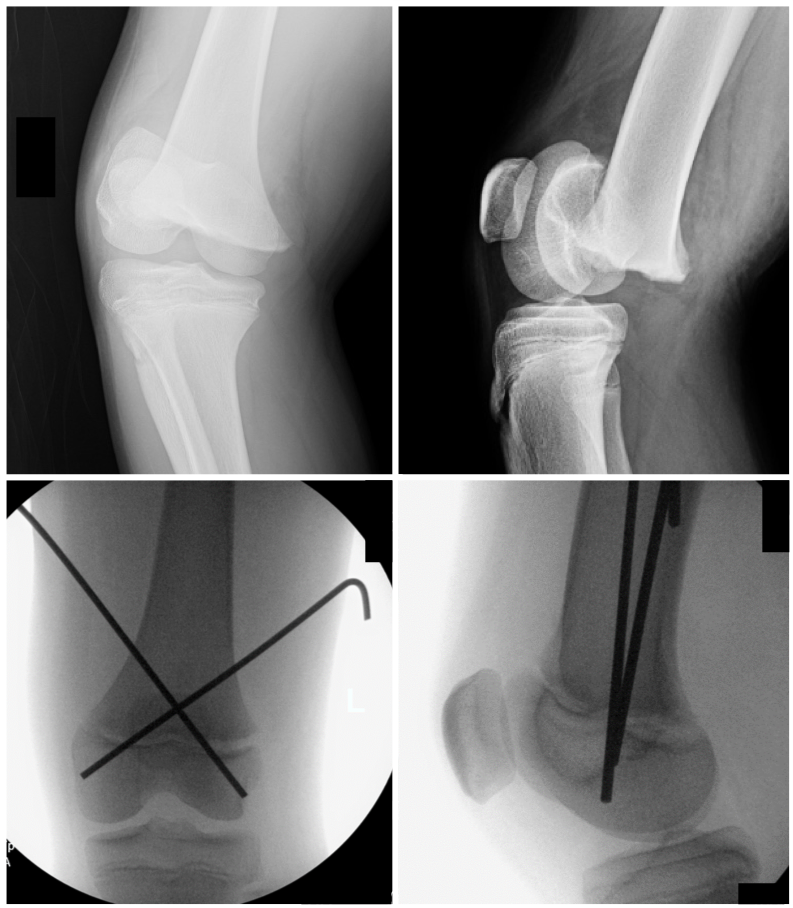 Figure 4: Salter-Harris I fracture of the distal femoral physis, treated with closed reduction and percutaneous pinning.

Type II - The fracture travels transversely through the growth plate and extends vertically into the metaphysis, typically resulting in a triangular fragment of metaphysis of variable size that remains attached to the physis and epiphysis (Figure 5).  Among the definitively diagnosed fractures, these are the most common Salter-Harris fracture type (noting that non-displaced Type I fractures, which are likely the most common, may be under-diagnosed). 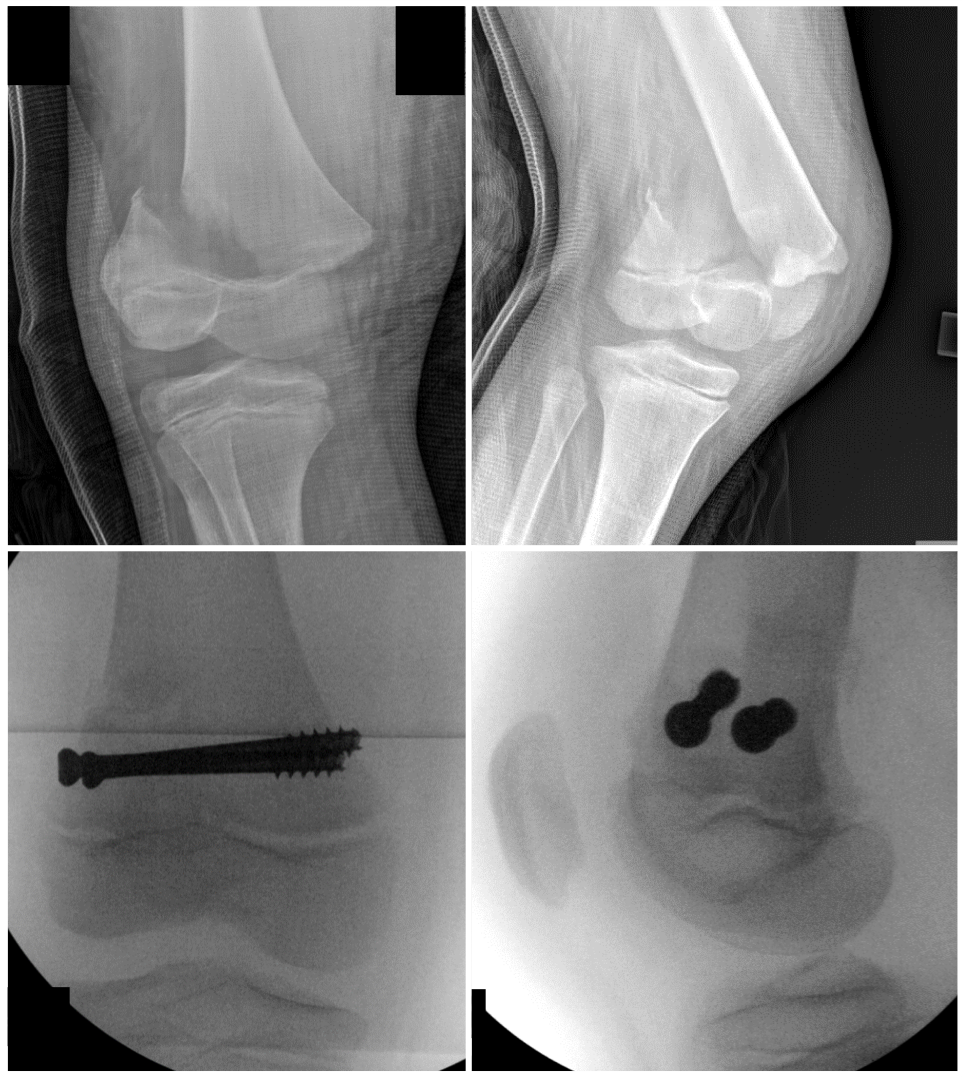 Type III - The fracture travels transversely through the growth plate and extends vertically into the epiphysis and typically to the articular surface of the joint (Figure 6). These are more prevalent in older children in whom the physis has begun to close. 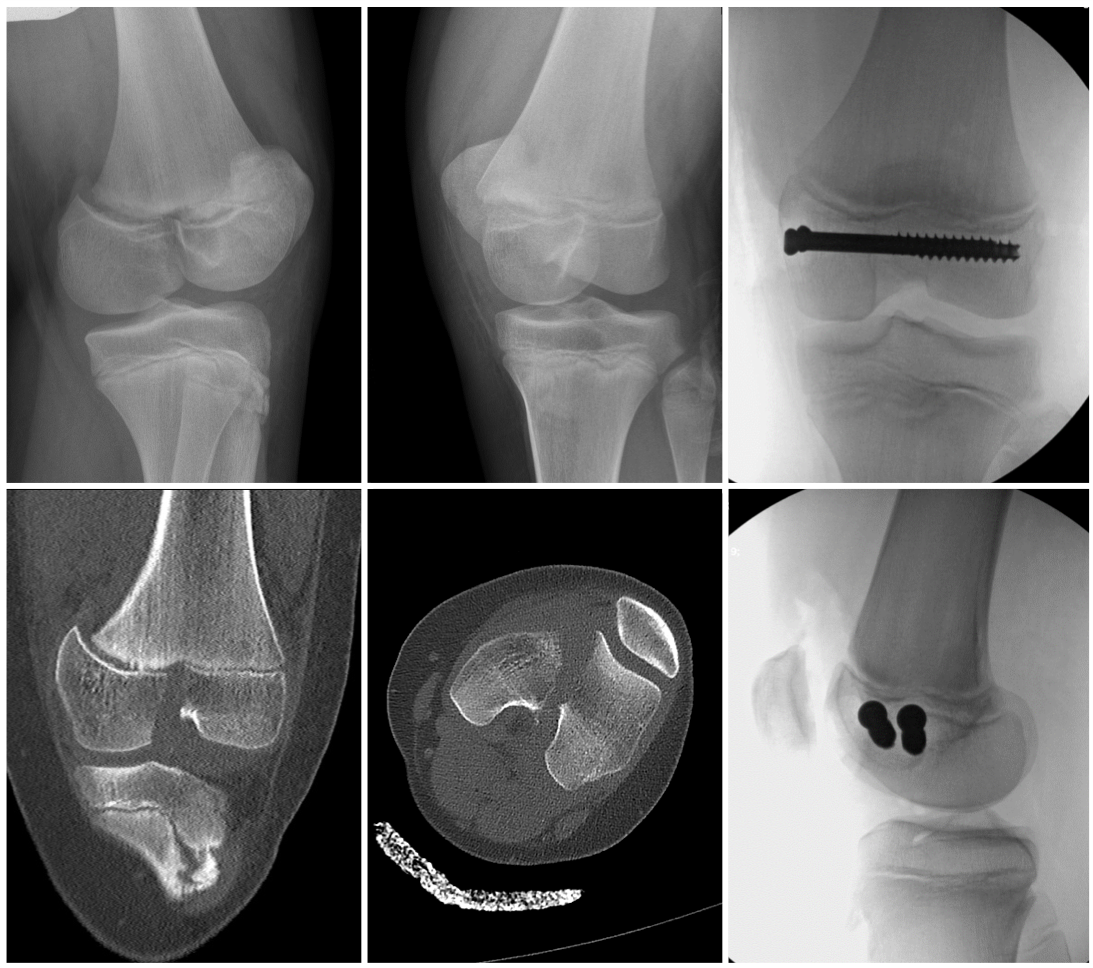 Figure 6: Salter-Harris III fracture of the distal femoral physis showing the fracture line splitting the epiphysis and continuing to the knee joint. Treated with open reduction to ensure restoration of the articular surface and held with cannulated screws.

Type IV - The fracture travels vertically through the metaphysis, across the physis, and through the epiphysis (Figure 7). 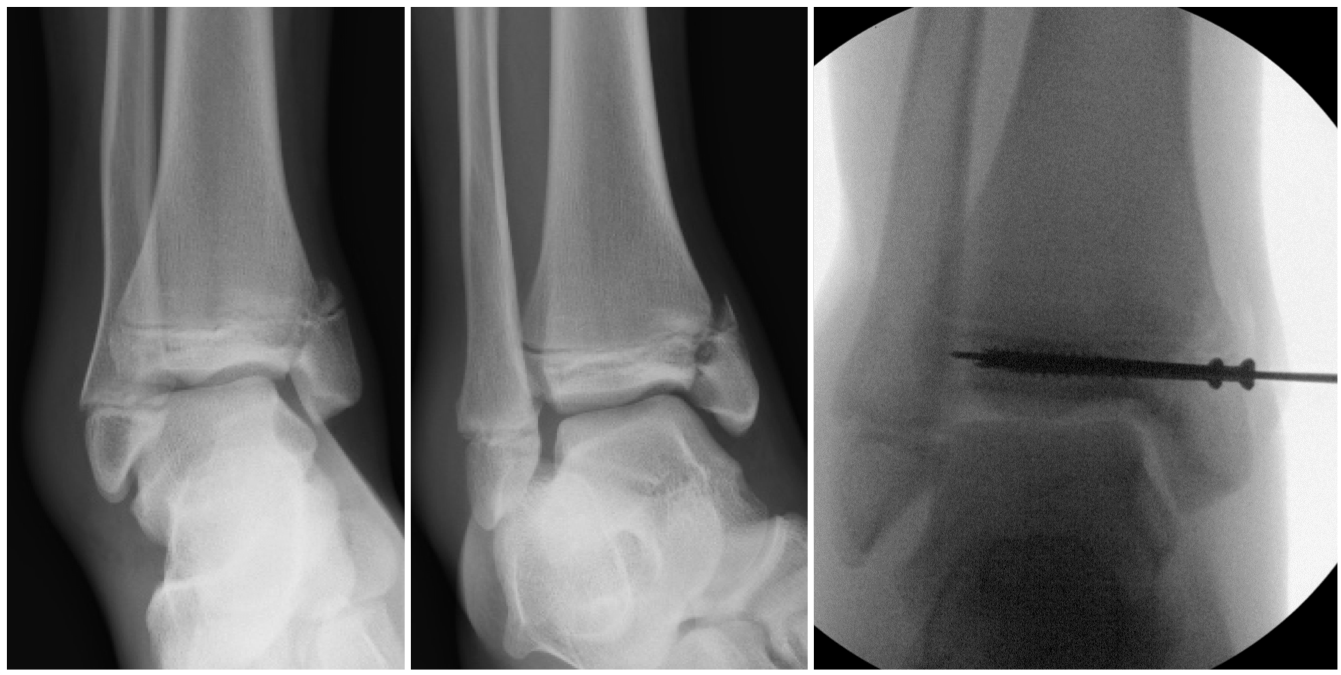 Figure 7: Salter-Harris IV fracture of the distal tibia fracture showing the fracture line traveling through the metaphysis, through the physis, and into the epiphysis exiting in the ankle joint. Treated with open reduction and cannulated screw fixation.

Type V - Crush injury to the growth plate resulting from a compression force. This type might be difficult to appreciate on radiographs, but may be recognized by narrowing of the physis or compression of the nearby metaphysis.

Mechanisms of injury that in an adult would cause sprain ligaments more likely will cause physeal fractures in skeletally immature patients. Thus, a 12 year old who twisted his ankle and had normal appearing x-rays may nonetheless not have sprained his ankle (as would be assumed in the adult) but indeed have a growth plate fracture. This patient needs to have his ankle immobilized, and either treated empirically as if a fracture were present (see below) or re-assessed 10-14 days after injury.

Treatment of physeal fractures is determined on a case-by-case basis depending on the anatomic location, amount of displacement, Salter-Harris type, and involvement of the articular surface. To limit the potential for growth arrest and to maintain function, the goals of treatment are to restore alignment of the growth plate and any involved joint surface.

In general, Type I and II fractures with minimal or no displacement are treated with closed reduction (if needed) and immobilization (Figure 8). Most patients have a good clinical outcome. However, fractures that are widely displaced and or unstable may require surgical stabilization (Figures 5 and 6). Bear in mind as well that widely displaced fractures often have soft tissue blocks to reduction (typically a piece of periosteum, muscle, or tendon). If a reduction is difficult, one should not force it. 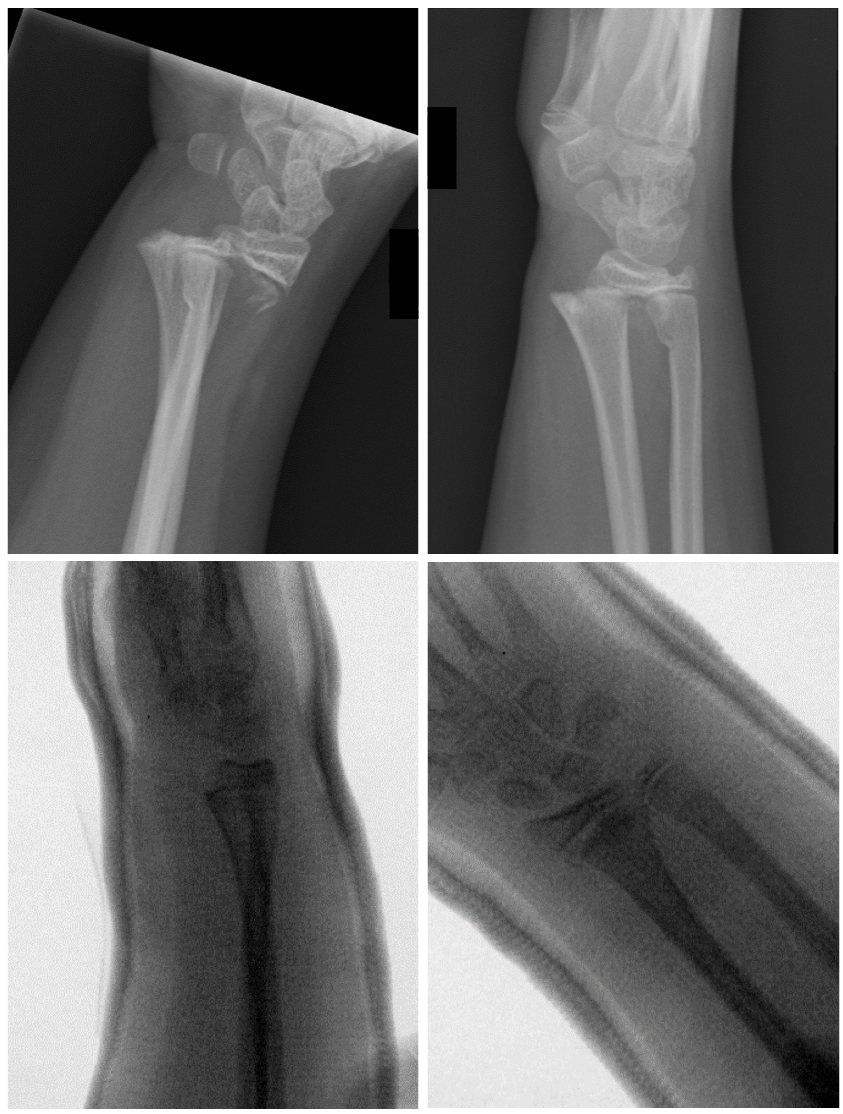 Salter-Harris Type III, IV and V require surgical intervention to realign the physis and ensure articular congruity (Figures 7 and 8). In all fracture types, the number of reduction attempts should be limited to prevent damage to the growth plate. If possible, it is best to avoid crossing the growth plate with implants. This is however necessary in some cases to maintain stability, and when needed smooth, small diameter implants should be used preferentially.

The most concerning potential complication from a fracture involving the growth plate is growth arrest. In any physeal fracture there is the potential for damage to the growth plate tissue with formation of a “bony bar” across the physis that can disrupt the normal bone growth. Partial growth arrests can lead to asymmetric growth and result in angular deformities (as say the lateral aspect of the bone continues to grow whereas the medial does not). Complete growth arrests can result in a clinically significant limb length discrepancy.

The risk growth disturbance increases with increasing Salter-Harris type number.  In Type I and Type II injuries, the fracture typically travels through the hypertrophic zone and the germinal and proliferative zones stay in continuity. The likelihood of growth disturbance is therefore lower. In some regions of the body, such as the distal femur and proximal tibia, where the growth plate is undulated (that is, more curvilinear), Type I and II fractures are at higher risk of growth disturbance.

In Type III and IV fractures, the germinal and proliferative zones are interrupted leading to higher rates of physeal bar formation and growth disturbance. Type V crush injuries cause severe damage to all layers of the physis and have a very high rate of growth arrest.

Growth arrest and physeal bars can be treated in a variety of ways. If relatively small, the bone that crosses the growth plate can be removed and that space filled with bone wax, fat or other fillers. Typically, this is best reserved for bony bars that are less than 50% of the growth plate surface area and in patients who have at least two years of growth remaining. Larger bars are usually best treated by completing the growth arrest and addressing any resulting deformities. In the case of angular deformities, osteotomies can be used to restore mechanical alignment of the limbs. For unequal limb lengths, procedures to lengthen the short bone can be performed or the growth of the longer bone can be stopped at the appropriate time to allow the shorter limb to “catch up”.

Identify the four basic segments of a long bone. Identify and describe the four cellular layers of the physis. Describe the Salter-Harris classification and correctly apply it to radiographs of bone injuries.