The content that follows is intended for healthcare providers. This material was prepared for educational purposes only. We therefore disclaim any and all liability for any damages resulting to any individual which may arise out of the use of the material presented here.
The information provided here cannot substitute for the advise of a medical professional. Even if a statement is completely true in the abstract, it may not apply to a given patient.

Injuries to the soft tissues surrounding and supporting the metacarpophalangeal (MCP) and interphalangeal (IP) joints of the fingers and thumb (Figure 1) are common. Injuries range from minor sprains that resolve with minimal treatment (such as a partial ligamentous tear treated with buddy taping or splinting) to more severe injuries that require surgical intervention, such as complete tearing of the ligaments and dislocation of the joint. (Soft tissue injury can also involve the tendons and nail, both discussed elsewhere.)

Unlike the other digits, the thumb lacks a middle phalanx, and consequently has only two joints: the interphalangeal (IP) and the metacarpophalangeal (MCP).

Figure 2: Schematic profile of the anatomy of the IP joint. The volar plate is in green; the capsule is orange.
(modified from Wikipedia. http://bit.ly/1STK5QG) 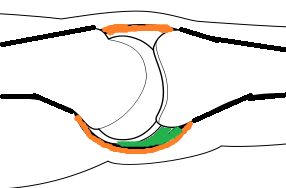 On the palmer side, there is a thick fibrocartilagenous structure called the volar plate, that spans the joint and resists joint hyperextension.

In the metacarpophalangeal joint, the metacarpal head articulates with the concave base of the proximal phalanx. Similar to the PIP and DIP joints, the MCP joint is supported by its collateral ligaments and volar plate, as well as the flexor and extensor tendons. Dorsally, the MCP joint is further supported by the sagittal bands, which fan out from the volar plate to attach on the extensor tendon, helping to stabilize the joint and extensor mechanism. The MCP joints permit both flexion-extension and adduction-abduction movements.

Patients with finger sprains and dislocations typically report a history of “jamming” the finger, with pain and swelling in the involved digit.

Deformity may be visible if a dislocation has occurred (though a lack of deformity does not exclude that diagnosis).

Inspection of the digit may also reveal ecchymosis, abrasions, or lacerations.

Tenderness to palpation should be assessed: radial or ulnar joint line tenderness implies collateral ligament injury or fracture, whereas volar tenderness implicates injury to the volar plate. Range of motion testing can be difficult given patient pain and swelling but it is important to assess in order to determine joint stability. The joint should be stressed in radial and ulnar deviation to test collateral ligament integrity. The joint should be stressed in full extension to test bony stability, as well as 30° of flexion to test collateral ligament stability. (That is, when the finger is held at full extension, a ligament injury may not be apparent on stress testing, as bony congruity may produce a sense of stability.)

A digital nerve block to numb the finger may be required to assess active range of motion. (It is commonly recommended that this block should not contain epinephrine as the drug may cause constriction of the blood vessels and finger ischemia. Nonetheless, a recent review of more than 1000 cases (PMID: 20697319) found no complications associated with the use of epinephrine in digital blocks.)

Near full arc of motion without visible hinging indicates a stable joint.

In dislocation injuries, range of motion may be blocked by interposed soft tissue; the examiner should avoid further injury and not force motion during the examination.

To rule out tendon injuries, the integrity of the flexor and extensor tendons should be tested as well. (Please see the chapters pertaining to those injuries for detail).

The neurovascular status of the finger’s digital nerves and arteries should be assessed, as dislocations can damage the nerves or vessels. Stretching of the nerves can lead to neuropraxia, that is, transient impaired sensory function. Two-point discrimination is more sensitive than light touch sensation when assessing digital nerve function. Discrimination greater than 6mm is indicative of nerve injury. If arterial injury is suspected, a Doppler test may be performed on both the ulnar and radial sides of the digit to assess arterial integrity.

Radial and ulnar collateral ligament injuries occur due to forced lateral deviation of the finger. Injuries are graded by the typical 3-point system, in which a grade 3 sprain is a complete tear, characterized by the absence of a firm end point on exam; a grade 2 sprain has laxity but a good end point; and a grade 1 shows no laxity, only pain, with the application of stress. (The quality of the "end point" is a subjective assessment, but one can think of the restraint produced by a chain link as a "firm end point" --it snaps to attention when its limit is reached.)

Ulnar collateral ligament injuries of the thumb (Figure 3) are particularly common and are known as skier’s or gamekeeper’s thumb. These injuries occur due to abrupt forced radial deviation of the thumb. Complete tears can include a bony fragment of the base of the proximal phalanx and this bony fragment can become trapped above the thumb adductor tendon (aponeurosis), a condition known as a Stener lesion. (see Miscellany, below.)

Volar plate sprain (Figure 4) or partial tear occurs after a hyperextension injury of the finger. These injuries can lead to joint subluxation without frank dislocation or true dislocation of the joint. Patients with injuries to the volar plate will be tender to palpation along the anterior aspect of the injured joint and may hold the finger in a hyperextended or flexed position at the level of the injured joint. Range of motion should be tested with particular attention paid to any joint subluxation during the arc of motion.

Dislocations (Figure 5) are characterized by the position of the distal skeletal component relative to its proximal counterpart. Therefore, the three types of dislocation are dorsal, palmar and lateral.

The majority of thumb and phalangeal dislocations are dorsal, and the finger or thumb will appear hyper-extended at the affected joint. Puckering of skin around the joint suggests that soft tissue may be interposed within the joint. A dorsal dislocation of the PIP joint can tear the volar plate or cause an avulsion fracture of the middle phalanx.

The affected finger should be taken through both an active and (gentle) passive arc of motion, keeping in mind that motion may be significantly limited due to pain and swelling or due to a bony block.

If a dislocation is strongly suspected based upon the clinical presentation, the joint should first be reduced and radiographs documenting a reduced joint should be obtained prior to assessing range of motion. Once the joint is reduced, a smooth, near full arc of motion will indicate a stable joint. A repeat neurovascular examination should always be performed after successful joint reduction.

Volar dislocations are rare injuries; they usually cannot be reduced in a closed fashion due to interposition of soft tissue structures including the collateral ligaments or extensor mechanism. The proximal phalanx can also be “buttonholed” through the space between the central slip and the lateral band blocking closed reduction. These cases often necessitate open reduction, which also allows assessment and potential repair of a disrupted extensor mechanism.

Radiographs, including posteroanterior (PA), perfect lateral and oblique views of the hand should be taken for all suspected finger injuries. True lateral and anteroposterior radiographs are mandatory for initial diagnosis of the injury, and oblique radiographs can be used optionally for further clarification.

Note that injuries to soft tissue around the digits often occur in the sagittal plane and are not seen on the posteroanterior view.

Even in cases of suspected isolated soft tissue injuries, radiographs should be obtained and evaluated to ensure that joint congruity is present and that there are no accompanying avulsion fractures. Radiographs also provide additional data regarding joint stability: dislocations accompanied by large fracture fragments are very unlikely to be stable even after reduction maneuvers are performed.

Ligamentous injuries to the hand most commonly involve the PIP joint. The mechanism of injury is typically hyperextension of the fingers, often caused by a fall on an outstretched hand or jamming injuries during contact sports. Injuries can range in severity from partial to complete tears, with associated dislocation of the involved joint.

Finger injuries, even minor sprains, can cause significant pain and/or swelling, both of which restrict motion on physical examination and make it difficult to obtain a clinical diagnosis.

The differential diagnosis of a painful or swollen finger includes:

Volar dislocations are less common injuries, but are usually more difficult to reduce. If gentle closed reduction does not work, open reduction in the operating room (by a hand specialist) may be necessary, as soft tissue structures may be interposed into the joint.

Inadequate radiographs, e.g. only having images in a single plane, may lead to a missed diagnosis.

Changes in sensation on the ulnar and radial sides of the finger suggest injuries to the digital nerves.

If the joint is stable after reduction of a dorsal dislocation, active range of motion can be initiated immediately to avoid joint stiffness, and buddy-taping or splinting should be instituted for physical activities for the next 3-4 weeks. A dorsal blocking splint should be considered the first 1-2 weeks to prevent PIP hyperextension and subsequent swan neck deformity.

Fingers should never be immobilized for greater than 30 days, as this may lead to a joint contracture and permanent loss of motion.

If the joint is unstable after reduction of a dorsal dislocation or cannot be reduced, the patient should be referred to an orthopaedic or hand surgeon immediately for surgical evaluation.

The surgical treatment chosen depends on several factors, including the joint affected, the presence of a concomitant fracture, and the amount of time since the injury occurred.

Most finger sprains and dislocations do well, as long as a stable, congruent joint is maintained.

One of the most common complications is joint stiffness and flexion contracture, which can be avoided by encouraging early range of motion and guided physical/occupational therapy if necessary. Residual swelling can continue for up to 6 months after the injury, and some patients will note a permanent increase in finger size, potentially necessitating them to have their rings resized.

Many finger sprains and dislocations are a result of accidental trauma. However, athletes, particularly those playing ball-handling sports, such as basketball and football, may be at a higher risk for injury and should always wear appropriate sport-specific padding. Some athletes (e.g. football linemen) tape their fingers prophylactically, in anticipation of injury.

Chronic instability of the thumb MCP is called a "gamekeeper’s thumb." The condition derives its name from Scottish gamekeeper’s method of killing rabbits by breaking the animals' necks barehanded; this method not only puts a lot of stress on the rabbit’s neck, but also on the gamekeeper’s thumb. Repetitive neck wringing causes wear-and-tear damage to, and ultimately failure of, the thumb MCP ulnar collateral ligament. This ligament failure produces instability.

The term “skier’s thumb” has been adopted to represent a more acute injury to the thumb ulnar collateral ligament, which occurs when skiers fall while holding their poles leading to hyperabduction of the thumb.

Consideration of the issue of cosmesis after finger sprains may be helpful. At the least, patients should be forewarned about the potential for cosmetic deformity after finger dislocation. (An iron worker may be proud of his work-deformed hands, but not all people think like that.)

Perform a thorough physical examination of the hand, including evaluation of active and passive joint range of motion and joint stability, and a sensory and vascular exam of the digits.