Early Onset Scoliosis can be classified as congenital, syndromic, neuromuscular or idiopathic. How are these types defined, and what are the clinical distinctions?

Scoliosis is defined as a three-dimensional deformity of the spine that includes both a more noticeable lateral deviation (Figure 1) and also a rotation of the vertebrae within the lateral curvature.

Early onset scoliosis is defined as scoliosis diagnosed before the age of 10 years old due to any cause.

Scoliosis can be categorized by etiology, as follows: congenital, syndromic, neuromuscular and idiopathic. 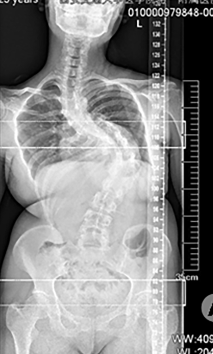 Syndromic scoliosis is defined as scoliosis that appears in conjunction with a recognized pediatric syndrome, such as Marfan’s, Ehlers-Danlos, trisomy 21 (Down Syndrome), Prader-Willi, neurofibromatosis, Noonan, and osteogenesis imperfecta.

Syndromic scoliosis is typically discovered after the diagnosis of a syndrome. When a child is diagnosed with a syndrome known to be associated with scoliosis, it is important that physicians screen for scoliosis. The natural history of scoliosis associated with the aforementioned syndromes varies, so the spinal curvature they cause progresses at different rates and requires personalized approaches to treatment.

The likelihood of developing neuromuscular scoliosis usually depends on the extent of nerve and muscle involvement of the specific disorder. Not all children with a neuromuscular disorder will develop scoliosis, but it is especially common in those who are non-ambulatory and wheelchair-bound.

Neuromuscular scoliosis differs in particular from other types of scoliosis as the deformity is often a long, sweeping curve, typically involving the thoracic spine and the lumbar spine, as well as the pelvis.

Idiopathic scoliosis is defined as scoliosis without known cause; that is, when congenital, syndromic and neuromuscular causes have been excluded. Children with idiopathic scoliosis are considered otherwise healthy. For them and their parents, reassurance is indicated, though the curve must be monitored to ensure that the chest cavity develops adequately (as to allow normal pulmonary function).