Down syndrome, or Trisomy 21, is the most common genetic disorder caused by a chromosomal abnormality. The presence of three copies of chromosome 21, rather than the usual two, leads to characteristic facial features, developmental delay, intellectual disability, and impaired immune function. Down syndrome is also associated with an increased risk of congenital heart defects, epilepsy, leukemia, and other diseases. Approximately 20% of all patients with Down syndrome have an associated musculoskeletal condition. The main effects of Down syndrome on the musculoskeletal systems are due to ligament laxity, excessive joint flexibility, and loss of muscle tone. Beyond generalized laxity and hypotonia, musculoskeletal manifestations of Down syndrome include cervical spine instability, hip subluxation, patellofemoral instability, scoliosis, and flatfoot deformity (also known as pes planus or pes planovalgus).

Trisomy 21 is usually due to duplication of one of the parental copies of chromosome 21 (most commonly the mother’s). This occurs due to failure of the diploid chromosome to separate into haploid gametes during meiosis (termed “nondisjunction”). In rare cases, Down syndrome is due to a chromosomal translocation.

There is an increased incidence of polyarticular rheumatoid factor-negative arthritis in children with Down syndrome. This typically causes erosive changes of the small joints of the hands and wrists. The mechanism of this arthropathy is not known.

Growth in children with Down syndrome is commonly delayed and stunted, as are many other developmental milestones. The typical facial appearance includes flattening of the nasal bridge, with upward-slanting eyes and epicanthal folds. The mouth is typically small with a large tongue, which commonly leads to obstructive sleep apnea. The neck may be stout or shortened, often with redundant skin posteriorly. The hands are shortened with a single palmar crease (Figure 1). The feet are usually flat (pes planus) and may have an unusually large space between the 1st and 2nd toes (Figure 2). Classically, the gait is waddling and broad based. 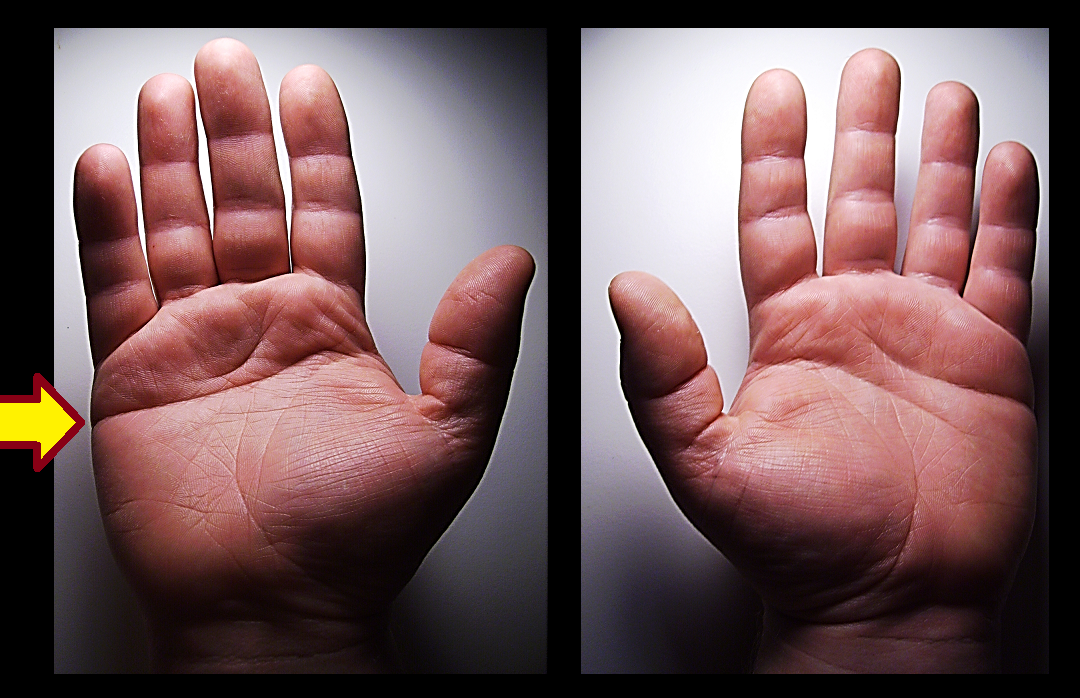 Figure 1: Shown at left is a hand with a single palmar crease (yellow arrow); a normal hand crease pattern is shown at right. (image courtesy Wikipedia) 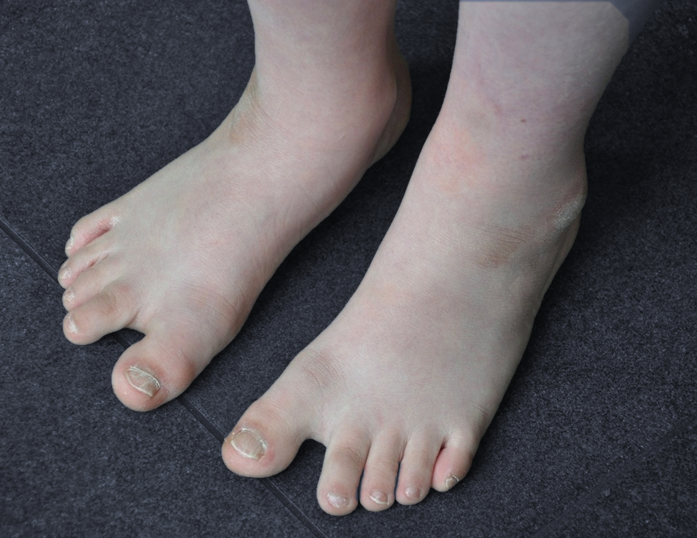 Figure 2: Clinical photograph of the feet of a boy with Down syndrome, showing a large gap between the first and second toes bilaterally. (image courtesy Wikipedia)

Most patients with Down syndrome have some degree of intellectual disability. Hearing and vision problems are fairly common; the incidence of epilepsy is also elevated.

Congenital heart disease is common in individuals with Down syndrome. This usually takes the form of a septal defect, although valve pathology may be seen. More serious defects can include tetralogy of Fallot. Hypothyroidism, type 1 diabetes mellitus, duodenal atresia, and leukemia are also seen at higher rates in patients with Down syndrome. Additionally, the overall occurrence of infection is greater, leading to elevated surgical site infection risk as compared to the general population.

Approximately 20% of all patients with Down syndrome have an associated musculoskeletal condition. Occipito-cervical and atlanto-axial instability are common. Atlantoaxial instability can be assessed on lateral cervical spine radiographs or sagittal CT scans by measuring the atlanto-dens interval (Figure 3). This interval should be 5mm or less. 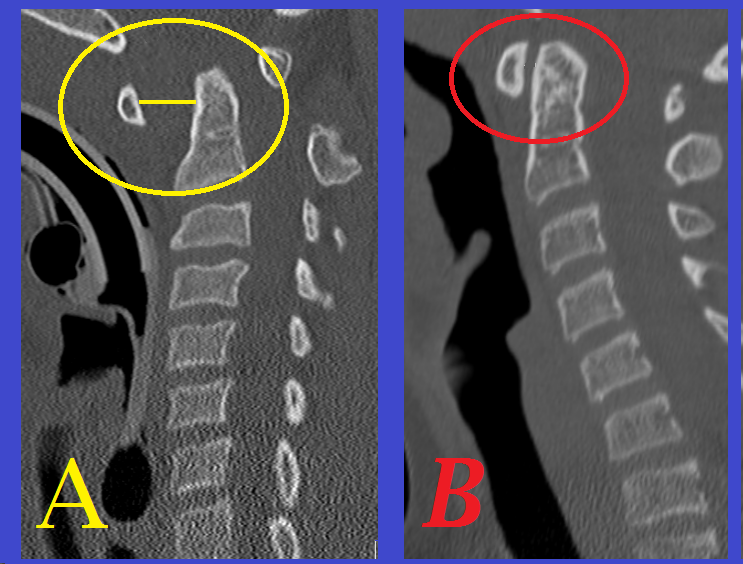 Figure 3: Mid-sagittal slice of a cervical spine CT scan. The image on the left (A) is of a 14-year-old boy with Down syndrome who was experiencing myelopathic symptoms due to atlantoaxial instability. The atlanto-dens interval, indicated by the yellow line, is ~13mm. The image on the right (B) is of a normal C-spine with a normal atlanto-dens interval for comparison.

Down syndrome is associated with high rates of scoliosis and slipped capital femoral epiphysis (Figure 4).

Figure 4: Frog-leg lateral radiographic view of the bilateral hips in a patient with Down syndrome, demonstrating a left slipped capital femoral epiphysis. 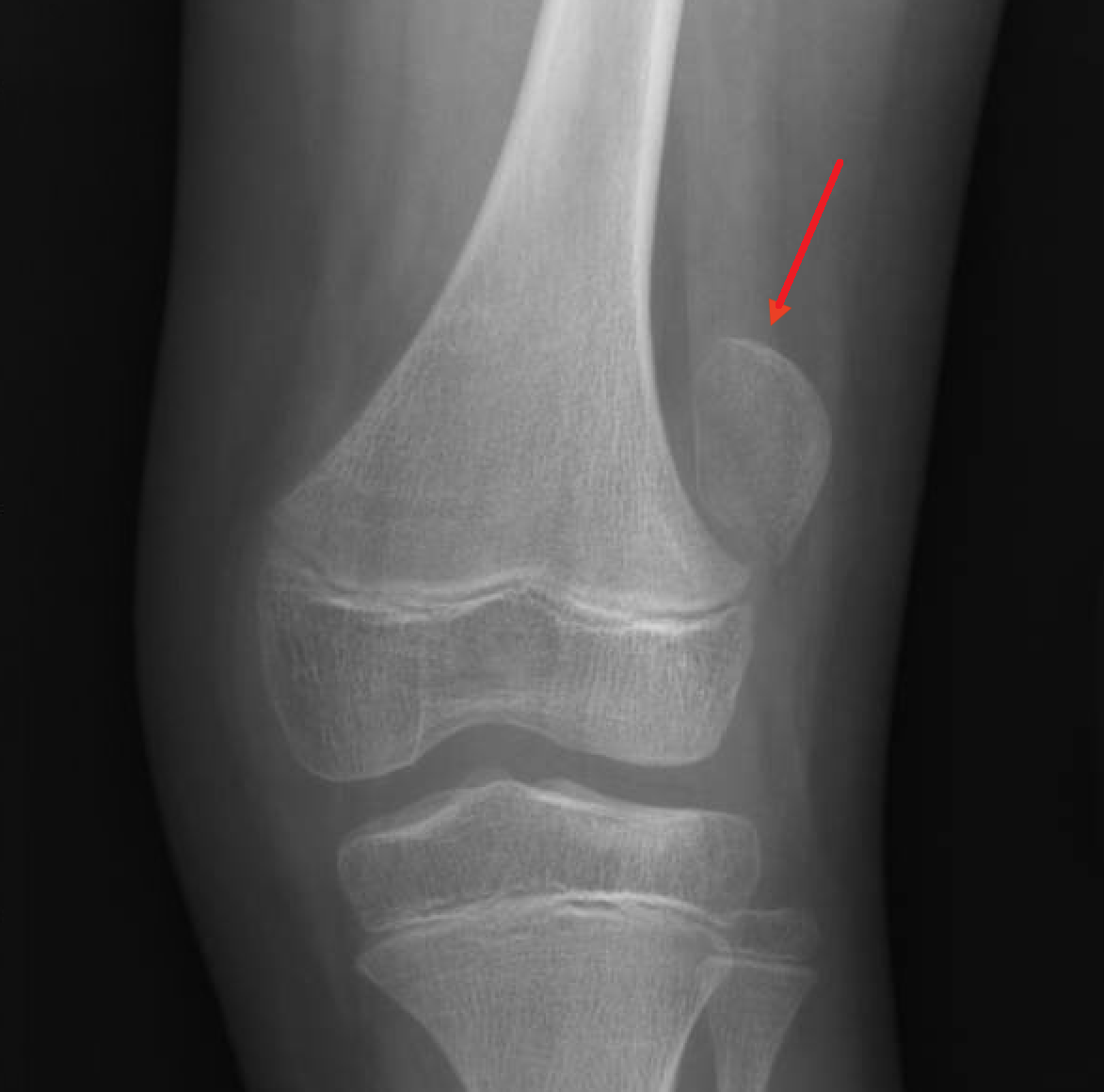 Figure 5: Anteroposterior radiographic view of the left knee in a patient with Down syndrome, demonstrating lateral dislocation of the patella (red arrow).

Chromosomal analysis in Down syndrome reveals three copies of chromosome 21, which is diagnostic for this syndrome.

On an AP pelvis radiograph, the iliac wings are commonly flared, with flat acetabula. Prior to the advent of chromosome analysis for diagnosis, the pelvis radiograph was often used to confirm the diagnosis of Down syndrome. 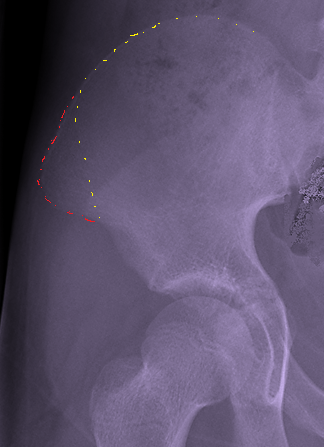 Down syndrome is the most common chromosomal abnormality, occurring about once per 700 to 1000 live births. This occurrence, however, increases with the mother’s age at conception. Down syndrome does not have a predilection for certain races or geographic regions. Life expectancy for patients with Down syndrome averages around 50-60 years. Individuals with Down syndrome also suffer premature aging, with a high prevalence of Alzheimer’s disease in those who reach mid-adulthood.

Diagnosis can usually be made based on the typical phenotypic characteristics described above. However, other conditions exist that may overlap phenotypically including congenital hypothyroidism, trisomy 18 and

Zellweger syndrome. When the diagnosis is in question, a chromosomal analysis may provide confirmation.

Down syndrome is itself a red flag for atlantoaxial instability. This must be considered before any surgical procedure requiring intubation is contemplated. Many clinicians recommend radiographic evaluation of the cervical spine before patients with Down syndrome are cleared to play sports, though this is not universally accepted.

When evaluating a Down syndrome patient with a limp or vague lower extremity pain, pelvis radiographs must be studied closely for a subtle slipped capital femoral epiphysis of the hip. This condition is otherwise easily missed, as these patients may have trouble articulating their symptoms.

When treating musculoskeletal manifestations in Down syndrome, non-operative modalities should be exhausted prior to surgical intervention as complication rates tend to be higher in this population.

Pes planovalgus and patellar subluxation can be treated initially with stabilization braces and physical therapy. Hip subluxation can be treated initially with hip abduction braces. When non-operative treatments fail, any surgical strategy must consider that patients with Down syndrome have generalized hypotonia and ligamentous laxity; thus, typical soft-tissue stabilization procedures alone are often ineffective. Osteotomies, such as tibial tubercle osteotomies for patellar instability or acetabular osteotomies for hip dislocation, are needed to address the generalized hypotonia and ligamentous laxity typically encountered.

If a slipped capital femoral epiphysis occurs in a Down syndrome patient, pinning the unaffected side prophylactically is usually undertaken at the same time.

Treatment of various degrees of atlantoaxial instability is controversial. Although the normal atlanto-dens interval is 5 mm or less, asymptomatic patients with an interval measuring between 5–10 mm can simply be observed initially. Surgical fusion and stabilization should be reserved for when symptoms develop.

Fusion options include C1-C2 fusion, or even occiput-C2/C3 if greater instability exists. However, it should be cautioned that complication rates in Down syndrome patients following fusion are high; overall complication rates can approach 50%, and mortality rates are quoted as high as 25%.

The spinal curvature that occurs in many patients with Down syndrome often resembles that of idiopathic scoliosis and treatment is similar: bracing and observation for small curves and surgical fusion for larger curves (Figure 7). 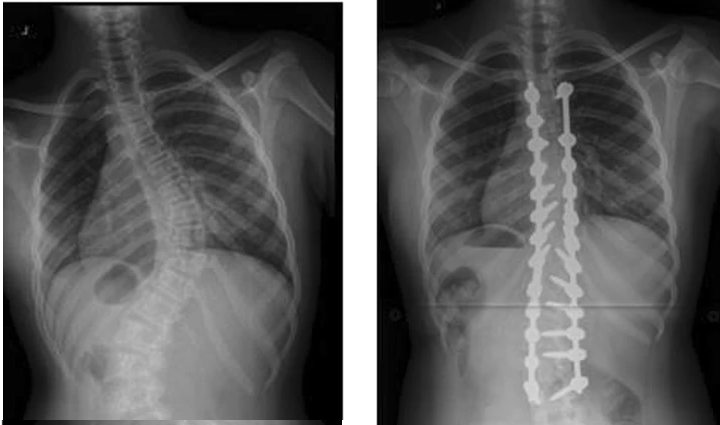 Although life expectancy for individuals with Down syndrome is shorter than normal, many patients routinely live into their 6th decade of life. Reasons for earlier mortality include cardiac disease and infections.

The most well-known risk factor for Down syndrome is advanced maternal age. This risk is < 0.1% when the mother is < 30 years old at conception, and increases more than 10-fold as the mother reaches her late 30s to early 40s. Parents of a child with Down syndrome are at increased risk of a subsequent child being affected. There is no known modifiable risk factor, other than maternal age, at which prevention can be aimed. For rare cases of Down syndrome due to a translocation, parents who carry the translocation are at an increased risk of having another child with the condition.

Down syndrome is named after John Langdon Down, who first described the condition in 1862. However, it wasn’t until the late 1950s that the genetic cause of the condition was identified, after the advent of technology that made karyotyping possible.