Disorders of the Biceps and the Triceps

The biceps and the triceps are the major muscles of the upper arm. Both muscles take origin from the humerus itself but also have an origin on the scapula; both insert on the forearm, namely, the radius and ulna respectively. Distally, both muscles are susceptible to overuse and strain, and may rupture or avulse from their insertions. Rupture of the biceps and triceps are most commonly due to increased eccentric force through a degenerated tendon. Common proximal biceps conditions include tendonitis, subluxation and rupture of the long head of the biceps tendon, which takes origin from the supraglenoid tubercle of the scapula (and is therefore primarily a shoulder muscle). Proximal triceps disease is rare.

As its name implies, the biceps (Figure 1) has two proximal divisions. The long head of the biceps brachii originates from the glenoid labrum at the supraglenoid tubercle; the short head from the coracoid process. The biceps inserts at the radial tuberosity. It is supplied by the brachial artery and is innervated by the musculocutaneous nerve. 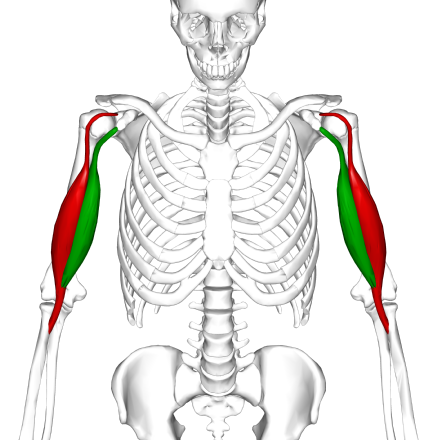 Figure 1: Anterior view of the biceps, with the long head in red and the short head in green. (from https://en.wikipedia.org/wiki/Biceps)

The biceps flexes the elbow, but perhaps contrary to popular belief, it is not the most powerful flexor of the forearm– a role which actually belongs to the deeper brachialis muscle. Indeed, when the forearm is in pronation (the palm faces the ground), there is only a minimal contribution from the biceps brachii to elbow flexion (Figure 2). In this position, the main flexor of the elbow is the brachialis, with contributions from the brachioradialis and supinator as well. 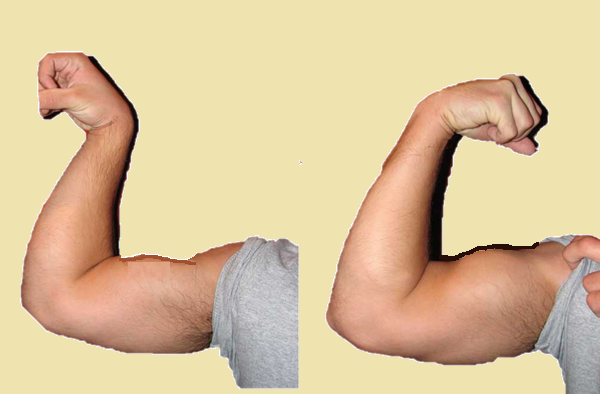 The triceps has three proximal divisions known as “heads”: two which originate from the posterior humerus, the lateral head and medial head; and one, the long head, which originates from the infraglenoid tubercle of the scapula (Figure 3). These then blend together and insert on the olecranon process of the ulna. The triceps is an extensor muscle of the elbow joint and is an antagonist of the biceps and brachialis muscles. It can also fixate the elbow joint – that is, hold it in a fixed position – when the forearm and hand are used for fine movements. The triceps is supplied by the deep brachial artery and posterior circumflex humeral artery and is innervated by the radial nerve. 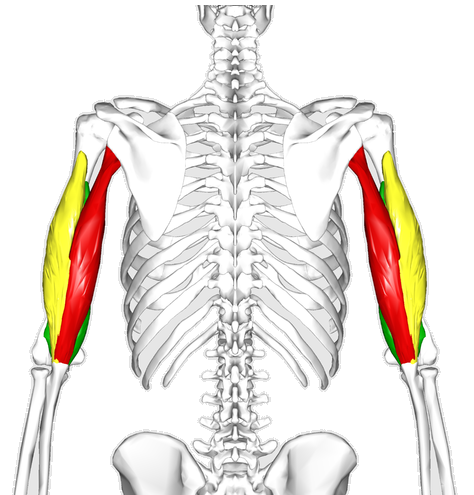 Figure 3: Posterior view of the triceps, with long head in red, lateral head in yellow and medial head (deep and obscured mostly) in green. (from https://en.wikipedia.org/wiki/Triceps)

Patients with a distal biceps rupture present after experiencing a painful pop in the elbow after an eccentric force is applied – that is, as the elbow is moved from flexion into extension by an external force, with the biceps attempting to resist or slow that motion.

Patients will complain of pain and weakness, primarily in supination.

The physical exam reveals tenderness to palpation and possibly a defect, with some proximal retraction of the muscle belly as well, causing a “reverse Popeye sign." Ecchymosis in the antecubital fossa may be seen too.

The hook test may reveal the absence of the normal tendon insertion (Figure 4). In this test, the examiner’s index finger attempts to pluck or “hook” the biceps tendon in the fossa, with the patient actively flexing the elbow and supinating the forearm. 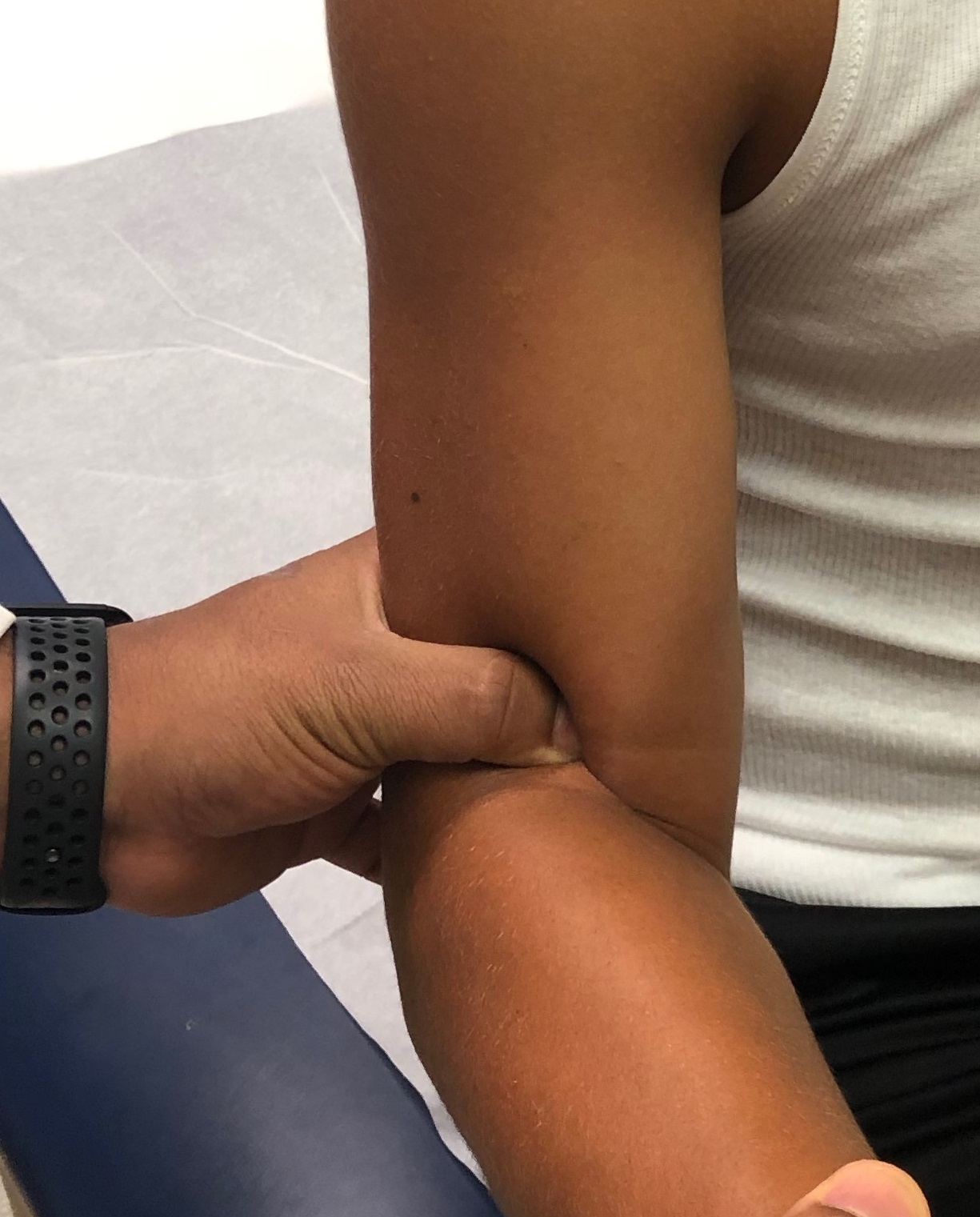 Figure 4: The hook test. When the biceps tendon is intact, the examiner’s finger can grasp (or “hook”) the lateral edge of the biceps tendon. An absence of any “hookable” tendon suggests a rupture.

Patients with a distal triceps rupture likewise present after a painful pop, usually after a fall. (When a patient lands on the outstretched hand, there may be a force tending to collapse, or flex, the elbow. The triceps can be injured as it resists this force.)

The physical exam of a patient with a triceps injury usually reveals painful swelling and ecchymosis over the posterior aspect of the elbow. Here too there may be a palpable defect. An inability to extend the elbow against resistance suggests the diagnosis, though a partial tear may allow some motion, or may be so painful that no motion is seen (despite having some tendon in continuity). Therefore, a modified Thompson squeeze test (similar to what is done in the calf for suspected Achilles ruptures), in which the triceps muscle is firmly squeezed with the patient lying prone and the arm hanging off the edge of the table, may be performed: a lack of any elbow motion with this maneuver suggests complete disruption of triceps.

Plain radiographs will reveal any fracture; there may also be a flake of bone seen with avulsions.

MRI can be used to differentiate partial from complete rupture and to evaluate the degree of retraction.

Ruptures of the distal biceps occur most commonly at the point of insertion, either as a complete or partial avulsion from the radial tuberosity. This is an almost-exclusively male condition, and almost always seen in the dominant arm.

Ruptures of the triceps are rare (about 1% of all tendon ruptures) and affect males in a 2 to 1 ratio. This condition is typically found in weightlifters and body builders.

Patients with ruptures of either tendon are usually in the age of 30 to 50: old enough to have degenerative change, but young enough to exercise vigorously enough to cause damage.

An inability to move the elbow might reflect a bone injury, which would be detected or excluded on radiographs.

Tendon rupture might signify use of steroids and other banned substances. Falls in the elderly may signify underlying disease (and risk of further falls).

Non-operative treatment usually results in up to 50% lost supination strength, but only about 30% loss of flexion strength.

Operative repair (Figure 5) is either with an anterior single or double incision technique using both an anterior incision to prepare the tendon and a second posterior-lateral one to fix the tendon to the bone. The single incision surgery reduces the risk of heterotopic ossification but with higher risk of nerve injury.

Figure 5: The biceps tendon prepared for surgical reattachment into a socket on the radius is shown (photo A). A small metallic button is placed on the end of the tendon, to lock on the opposite surface of the radius (See diagram B) (Courtesy https://openorthopaedicsjournal.com/VOLUME/11/PAGE/1364/FULLTEXT/)

(The nerves at risk are the lateral antebrachial cutaneous and the radial nerve; injury to the former is more common, to the latter more severe.)

Patients with a complete distal triceps rupture are typically indicated for surgical repair. The patients are immobilized for only about 2 weeks post-operatively (to minimize contracture of the elbow) with active range of motion initiated shortly thereafter. Non-operative treatment with splint immobilization can be chosen if only a partial tear is present (demonstrated by an ability to extend against gravity) or if the patient has low demands and is too sick for surgery.

The patient reported outcomes following distal biceps and triceps rupture repairs are generally very good, however, there is the potential for significant complications. Following distal biceps tendon repairs, nerve damage, re-rupture, and heteropic ossifications can be seen. Elbow stiffness, ulnar nerve injury, and re-rupture are the most common complications following triceps tendon repair, although these generally occur in less than 10% of patients.

The “Popeye” sign is named after the cartoon character due to the characteristic bulge of the muscle, yet interestingly, Popeye himself had meager biceps; his muscle mass was mostly in the forearm (see Figure 6). 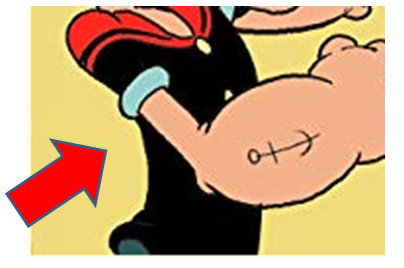 Figure 6: The real Popeye did not have a “Popeye” sign.

As many bodybuilders know, the triceps accounts for approximately 60 percent of the upper arm's muscle mass; thus exercising this muscle, and not the biceps, is apt to produce larger arms.

Physical examination to diagnose disorders of the biceps and triceps.