Disorders of the Elbow Ligaments

The ulnar collateral ligament (Figure 1) is composed of three bundles (the anterior, posterior, and transverse) and is the primary elbow stabilizer against valgus stress. The anterior bundle is the main stabilizer of the ulna from 30 to 120 degrees of elbow motion. The posterior bundle provides stability at higher degrees of flexion. The transverse bundle is thought to have no significant role in elbow stabilization. From 0 to 30 degrees of elbow motion, the joint is stabilized by bony congruity.

During the acceleration phase of a pitch, the elbow extends from approximately 110 degrees of flexion to 20 degrees. This generates a very high valgus force at the elbow and can produce small tears in the ligament.

Injury to the lateral collateral ligament is most often caused by an elbow dislocation.

As its name implies, the annular ligament forms a ring that surrounds the radial head, allowing the radius to twist relative to the ulna at the proximal radioulnar joint. This allows supination and pronation of the forearm.

Injury to the ulnar collateral ligament can present as acute injury (classically, with a “pop” during a single pitch, associated with pain and difficulty throwing thereafter). It may also present as a chronic condition, manifested by an aching pain and decreased performance, including loss of velocity and control (accuracy). There may also be paresthesias reported in the ring and small fingers, due to traction on the ulnar nerve.

A focused patient history should include questions about the onset of pain, what the patient was doing when the pain started, sports played, and the frequency of participation. 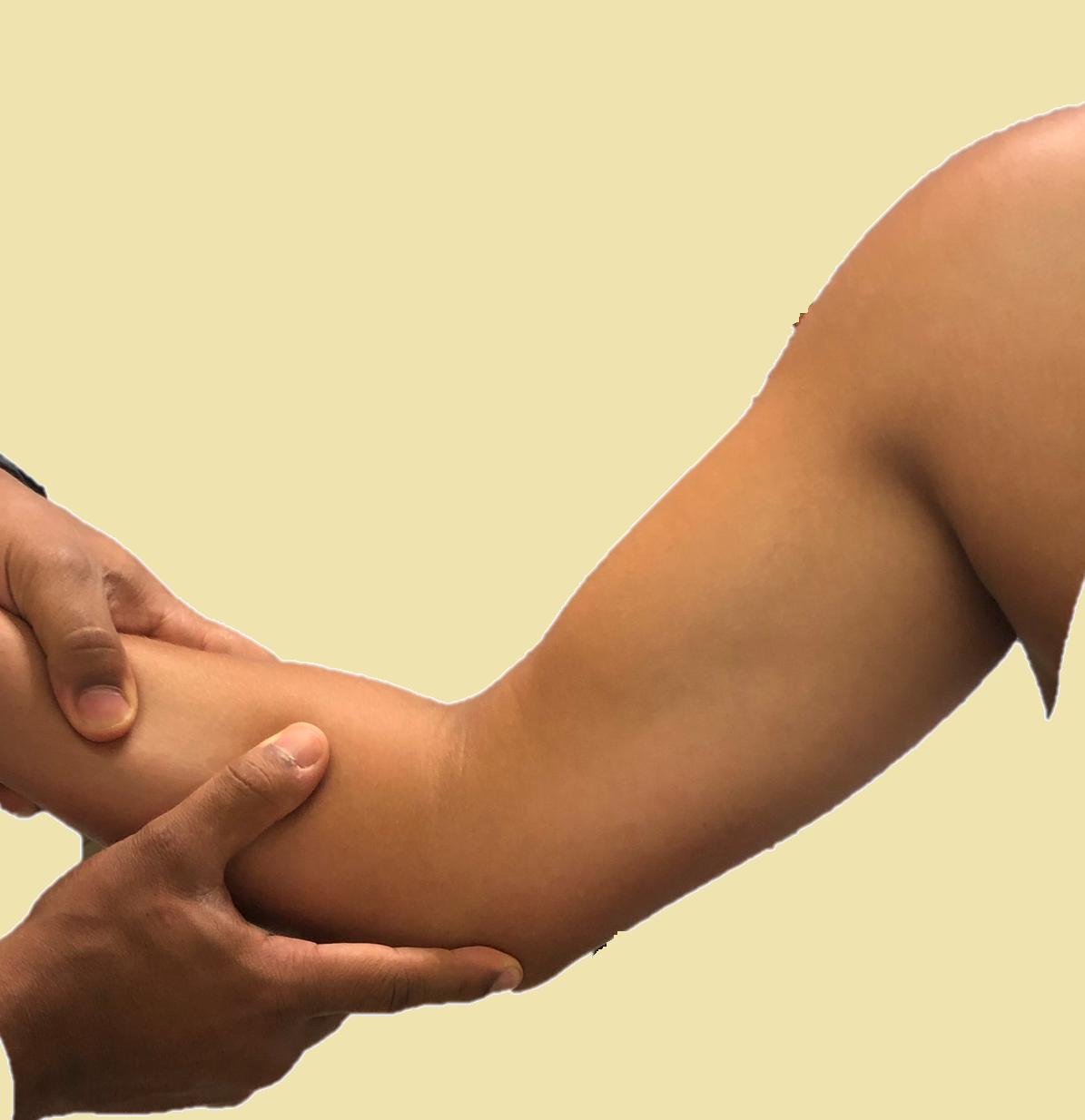 Figure 2: The examiner’s right index finger is on the patient’s ulnar collateral ligament.

Medial elbow instability can be difficult to reproduce on exam, as it may be seen only with the high forces generated during throwing; the examiner’s force will not reproduce the instability.

The valgus stress test is performed by passively placing the elbow in 30 degrees of flexion, and then externally rotating the humerus while applying a valgus stress. 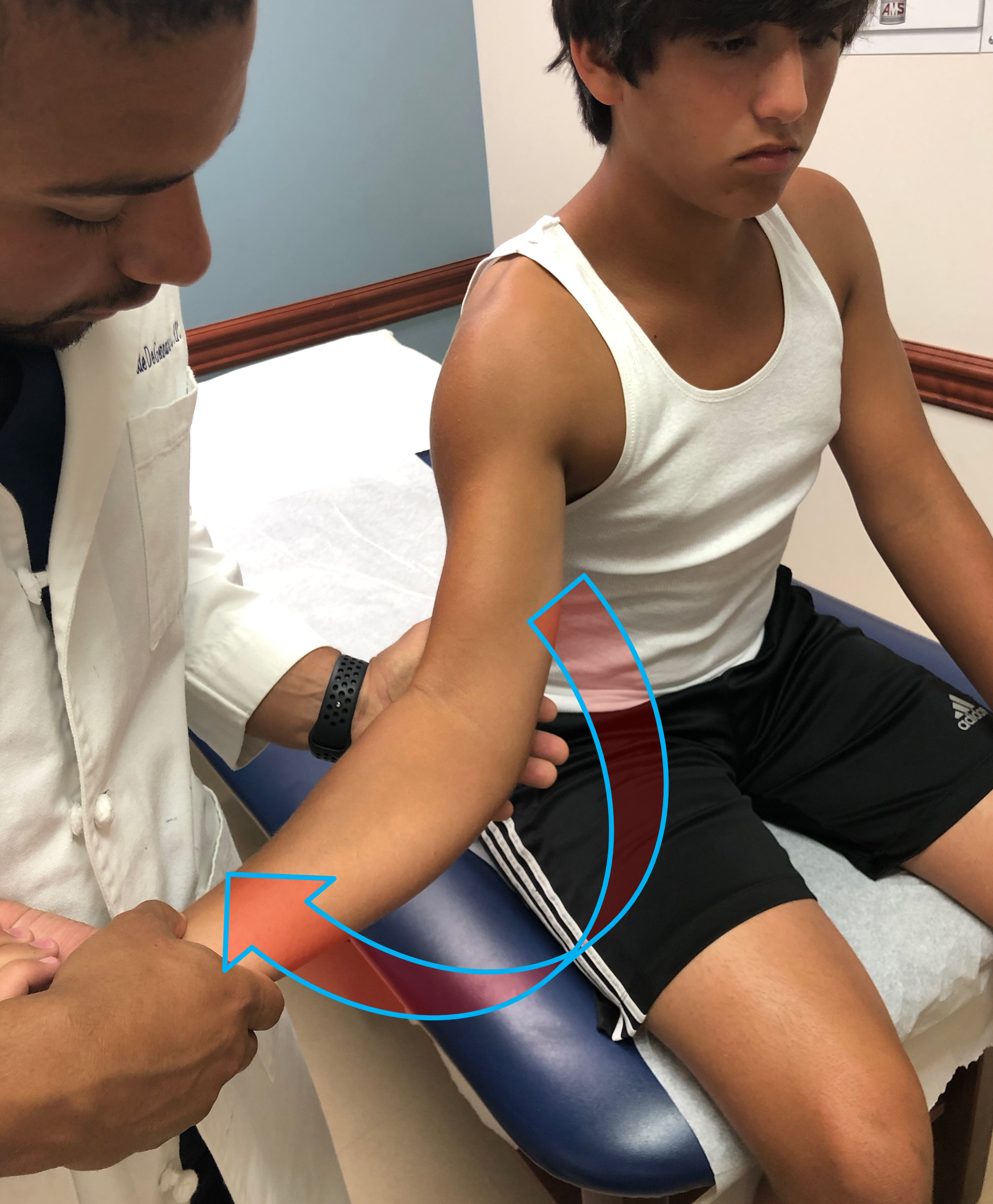 Figure 3: The valgus stress test of the elbow. The examiner stabilizes the elbow with his or her upper hand, and then attempts to externally rotate the arm by applying a force to the wrist. This force is transmitted to the humerus via the ulnar collateral ligament and thus tests its integrity.

The “milking maneuver” creates a valgus stress on the elbow, by pulling on the patient's thumb with the forearm supinated and elbow flexed at 90 degrees. A positive test is noted by reported apprehension, though instability or pain may also be noted. 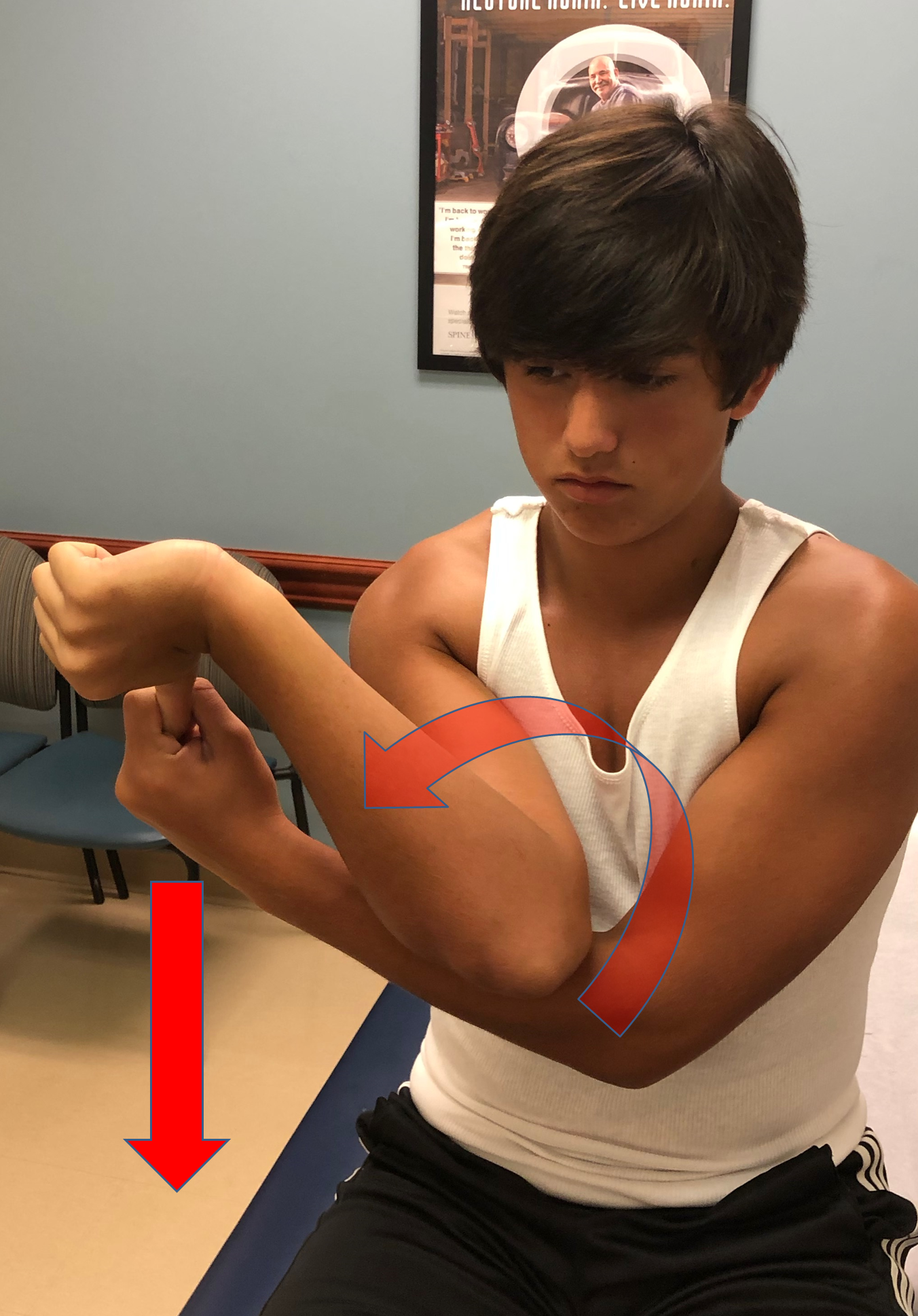 Figure 4: The “milking maneuver”. Pulling down on the thumb when the elbow is supported, the forearm is supinated and elbow is flexed (as shown) creates a valgus force at the elbow. Needless to say, the examiner is the one to position the patient and apply the force. Here our talent model is performing the test on himself to demonstrate the maneuver without an examiner in front of the camera.

The physical exam is characterized by tenderness over the lateral collateral ligament, with varus instability seen on provocative testing.

One may elicit instability with the lateral pivot-shift test. The patient is instructed to hold the forearm in a supinated position and the examiner then applies a valgus stress to the elbow and, concurrently, passively flexes the elbow. This maneuver is difficult if the patient is awake or the examiner is inexperienced. It may be simpler to ask the patient to do a push-up maneuver with the forearm supinated, as in the pushing off a chair’s armrests to arise from sitting. Pain, a sense of instability or the mere reluctance to attempt this suggest instability.

Radiographs may detect fracture (stress or acute), degenerative change, loose bodies or growth plate abnormalities. Radiographs should include AP and lateral views of the elbow; oblique views can help evaluate the olecranon osteophytes. Medial joint-line opening can demonstrate ligament failure, but stress views are not recommended, as they may worsen the condition. 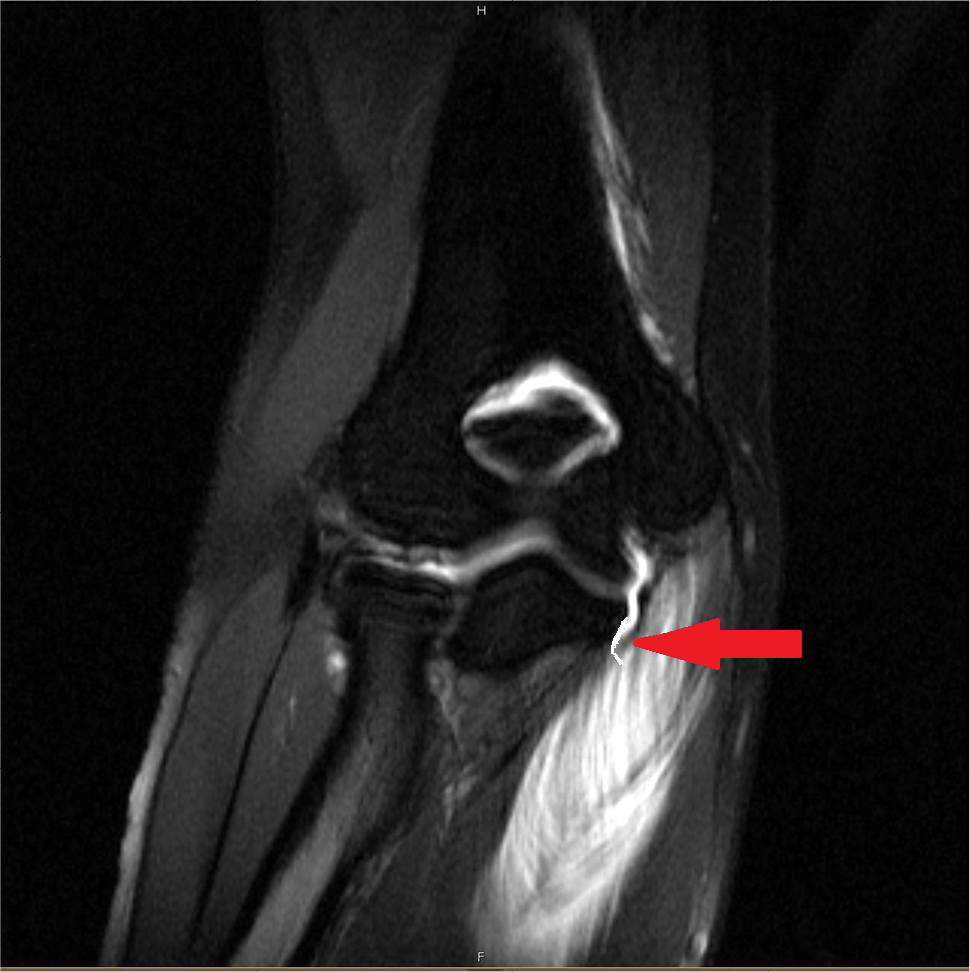 Figure 5: The arrow points to a distal medial collateral ligament avulsion. (from https://www.dovepress.com/article_metric.php?article_id=40434)

Magnetic Resonance Imaging is less effective for lateral collateral ligament tears; this diagnosis is made by history and physical examination, and may require examination under anesthesia for confirmation.

Ulnar collateral ligament injuries can occur in individuals who routinely play sports that involve an overhead throwing motion including cricket, javelin, tennis or volleyball. It is commonly associated with professional American Baseball pitchers. More recent observational studies report a high incidence of injury in high-school-age-pitchers. A 5-year report from the NCAA Injury Surveillance Program reports overall incidence of ulnar collateral ligament injury to be 1.12 per 10,000 athletic exposures (N=20) with 85% of injury occurring during throwing.

Subtle complaints of ulnar collateral ligament dysfunction without any overt findings on exam may be considered a “red flag” for impending injury, especially if the symptoms are not respected and the patient (often a throwing athlete) continues to engage in provocative activities.

Young athletes with a partial tear of the ulnar collateral ligament are advised to not throw for four to six weeks. Thereafter, they should start a rehabilitation process that involves pitching mechanics, shoulder kinematics, and core, lower extremity, and upper extremity strengthening. Once the patient is pain free and kinetic deficits of the pitching mechanics have been addressed, the patient is gradually integrated into a throwing program.

The efficacy of platelet rich plasma injections has not been established.

Corticosteroid injections are not recommended because they may weaken the ligaments.

Surgical management of ulnar collateral ligament tears is reserved for high level throwing athletes with symptomatic instability. Direct repair of the ligament is not typically performed. Reconstruction of the ulnar collateral ligament is often performed with autograft from the ipsilateral palmaris longus (though only 85% of people have a palmaris longus muscle, and among those who do, the tendon may be too short. In those cases, reconstruction is performed with gracilis tendon graft.) Return to competitive throwing occurs 10 to 14 months post-operatively.

Acute care treatment of lateral collateral ligament injuries is dictated by the treatment of the elbow dislocation that is often its cause.

Chronic lateral collateral ligament deficiency is initially treated with bracing, strengthening, and activity modification. Failing that, reconstruction with a graft may be needed.

Reconstruction of the ulnar collateral ligament appears to be highly effective. Return to an equal or higher level of play has been reported to be as high as 90%. A 2014 study of 41 professional baseball pitchers reported no significant differences in pitch velocity and common performance measurements between players who returned to play after ulnar collateral ligament reconstruction and pair-matched controls. (It is not clear to what extent the one-year hiatus and rehabilitation plays in this.)

Surgery for chronic lateral collateral ligament deficiency is likewise effective: the recurrence rate for instability is less than 10%.

Risk factors for ulnar collateral ligament injury include overuse of overhead throwing, particularly in youth pitchers. Recent trends amongst youth athletes have transformed baseball into more of a year-round sport. An epidemiology study from the American Sports Medicine Institute notes that pitch count is correlated with elbow and shoulder pain in pitchers. Youth pitchers should be limited to under 100 innings pitched per calendar year as risk of serious injury is 3.5 times greater above this limit. Limiting pitch count and not pitching year-round is probably more important than avoiding certain pitch type (fastballs vs curveballs, etc.).

Reconstruction of the ulnar collateral ligament was first performed in 1974. This surgery was performed by Dr. Frank Jobe on an American professional baseball player named Tommy John. These days, the procedure is known by many as “Tommy John Surgery”.