Developmental Dysplasia of the Hip

Developmental dysplasia of the hip (DDH) is a condition characterized by varying degrees of hip instability in a developing hip joint (Figure 1). The condition has a wide spectrum of severity ranging from a mildly shallow hip socket (acetabulum) to a completely dislocated hip (Figure 2). DDH is often idiopathic but hip dislocations may also be caused by an underlying congenital disorder. 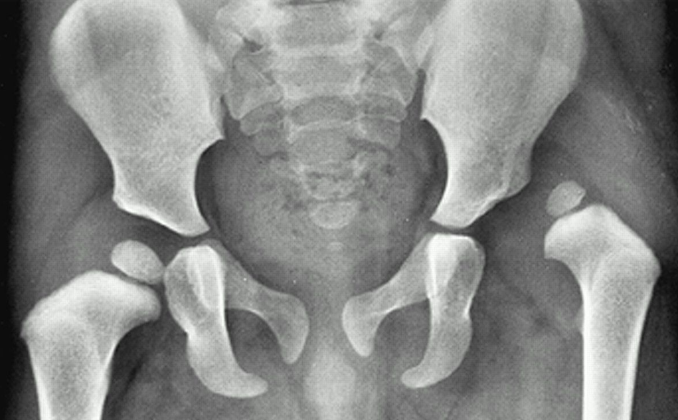 Figure 1: Radiograph showing a dislocation of the left hip.

Figure 2: The dysplastic hip may be partially out of the socket (subluxated) or completely out (dislocated). Note that the acetabulum will not develop normally if the head is not located. (modified from Wikipedia)

The hip joint is a ball and socket joint: The femoral head (the ball) fits into the acetabulum (the socket). The joint is further stabilized by the surrounding joint capsule and ligaments.

The development of the femoral head and acetabulum is reciprocal: the concavity of the acetabulum develops in response to the presence of the spherical femoral head and vice versa. Thus, if the head is not located, neither side of the joint developed normally. This has profound implications for treatment of cases in which the diagnosis is delayed: it very well may be that the joint cannot be simply re-located, as the misshapen head will simply not fit in the shallow, under-developed acetabulum.

There are many theories about the etiology of DDH, but the definitive cause is still unknown. There are, however, known risk factors. Untreated DDH is a leading cause of degenerative joint disease in the hip.

DDH has a variable presentation depending upon patient age. Hip dysplasia in very young children can be detected only if one looks for it – the hip does not hurt, so the child does not complain, and because the child is not expected to walk, the parents don’t notice it either.

In the first few months of life, infants are screened using the Ortolani and Barlow tests.

The Ortolani test reduces a dislocated hip, whereas the Barlow test attempts to dislocate an unstable hip. Both tests are performed on a supine infant.

The Ortolani test (Figure 3) is performed by an examiner flexing the infant’s hips and knees and applying pressure on the greater trochanters while abducting the infant's legs. The test is positive if a 'clunk' can be heard or felt as the femoral head is relocated into the acetabulum.

Figure 3: Schematic of the Ortolani test. In the panel at left, the hip is dislocated. The examiner’s force, shown the arrows in the panel to the right, relocates the hip.

For the Barlow test (Figure 4), the examiner applies posterior pressure to the adducted leg in an attempt to subluxate or dislocate the femoral head from the acetabulum. If the femoral head can come out of the joint, a "clunk" may be felt as it comes out.

Figure 4: Schematic of the Barlow test. In the panel at left, the femoral head is located in the acetabulum. The examiner’s posterior-directed force, shown by the arrow in the panel to the right, dislocates the hip.

By three to four months of age, soft tissues tighten and the Barlow and Ortolani maneuvers become less useful. 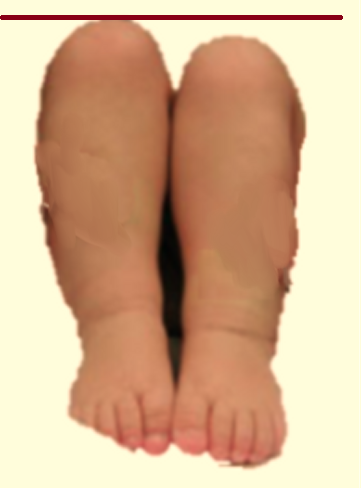 Figure 5: The Galeazzi sign. This photo of a prone child, taken from the foot of the bed, shows an apparent limb length discrepancy due to left hip dislocation. Indeed, the bones are the same length, but the left (as shown here) appears shorter because the left hip is not located.

Children of walking age may develop an apparent leg length discrepancy or limited range of motion. In the setting of bilateral dislocated hips, the patient may walk with a waddling gait.

For infants younger than 6 months, ultrasonography is the diagnostic imaging modality of choice. Ultrasound evaluates the morphology of the femoral head and acetabulum.

The alpha angle is a measurement that is the most useful to help guide treatment. It is the angle between the ilium and the acetabulum and should be greater than 60 degrees. In addition, ultrasound measures the femoral head coverage. In general, more than 50% of the femoral head (ball) should remain within the acetabulum (socket) (Figure 2 and 3).

In children older than 6 months, the femoral head begins to ossify, and thus plain radiographs can be used to evaluate for DDH. 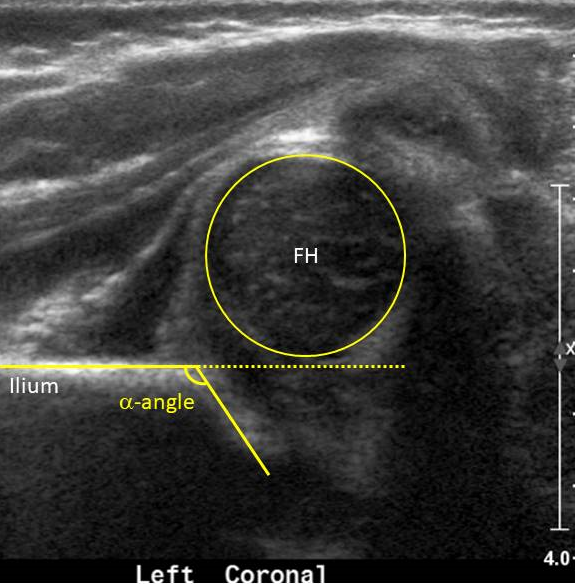 Figure 6: Ultrasound image demonstrating a complete hip dislocation. Note that the femoral head is normally bisected by a line drawn from the ilium (dotted line), but in this case, the femoral head (FH) is completely uncovered. 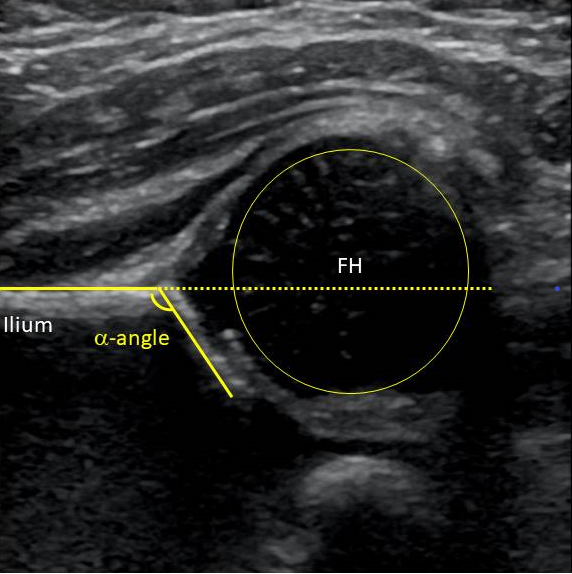 Figure 7: Ultrasound image demonstrating a normally developing hip. Note that the femoral head is bisected by a line drawn from the ilium (dotted line).

DDH is a common abnormality of skeletal development. Some form of DDH occur in about 1.3 out of 1000 births. It more commonly affects females as compared to males, and is more common in Native American, Eastern European, and Sami populations.

Developmental dysplasia in the form of a subluxated (or subluxatable) hip is very common, seen approximately in 1% of all births. Frank dislocation is much rarer, seen in approximately 1/1000 births. The condition is six times more common in females. Interestingly, the right hip is affected in isolation only approximately 20% of cases. In 60% of cases, the left hip is affected, and in the remaining 20%, the condition is bilateral. The risk of developmental dysplasia is five times higher if there is an affected sibling and 10 times higher if there is an affected parent.

DDH is commonly idiopathic and seen in isolation. Some associated conditions include metatarsus adductus and torticollis. Metatarsus adductus is a condition in which the bones of the forefoot are turned inward creating a “pigeon-toed” appearance of the foot. Torticollis is a condition in which an infant holds his or her head tilted to one side and is caused by a shortened/tight muscle in the neck. Both of these conditions, along with DDH, are considered “packaging disorders” (so named because it appears that an otherwise normal fetus is "packaged" too tightly within the uterus, leading to deforming forces on the limbs).

Occasionally, hip dysplasia may be associated to an underlying neuromuscular condition, such as myelomeningocele or arthrogryposis. These cases are treated differently than idiopathic cases.

Although DDH is most often an isolated condition, some cases are secondary to underlying neuromuscular conditions such as spina bifida. Thus, the presence of hip instability should be deemed a red flag, prompting a close diagnostic evaluation to exclude these conditions.

The goal of treatment is to reduce and maintain the femoral head in the acetabulum as early as possible to allow the hip joint to develop normally.

The standard of care for DDH diagnosed before 6 months of age is treatment in a dynamic hip brace (eg, Pavlik harness) that maintains the hips in a flexed and abducted position (Figure 8). These devices gently nudge the femoral head into the correct position and prevent extension and adduction of the hips -- the maneuvers in the Barlow test that would dislocate the hip. 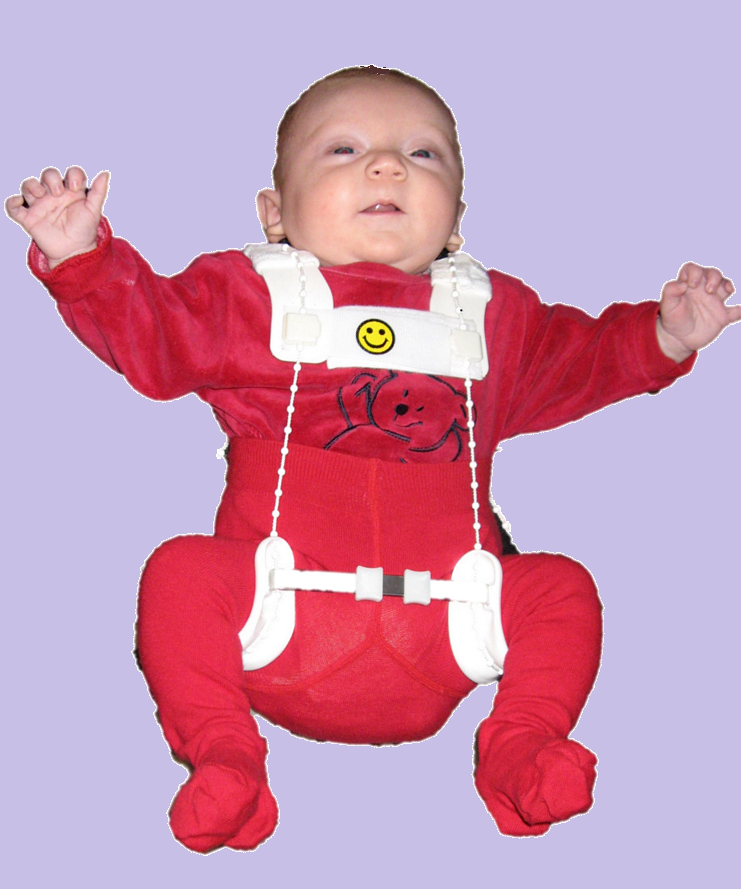 Figure 8: An infant wearing a dynamic hip brace (from Wikipedia).

These devices are worn for 23 hours/day for at least 6 weeks. It is critical that treatment is discontinued if the hip is not reduced by 4 weeks, as erosions of the pelvis may be caused. The overall success rate is 90%.

Children who are diagnosed between 6-18 months old or who failed brace treatment are typically treated with closed reduction and spica casting. A closed reduction procedure involves manually reducing the hip joint while the patient is sedated. A hip arthrogram (dye injected into the joint) is obtained to evaluate for a concentric reduction. Children are then immobilized in a spica cast to maintain the hip in a good position.

Children who are diagnosed when they are older than 18 months old or who failed other treatment options are usually treated with open reduction. This involves surgically removing any obstacles to reduction and may also include a pelvic or femoral osteotomy followed by spica casting (Figure 9). 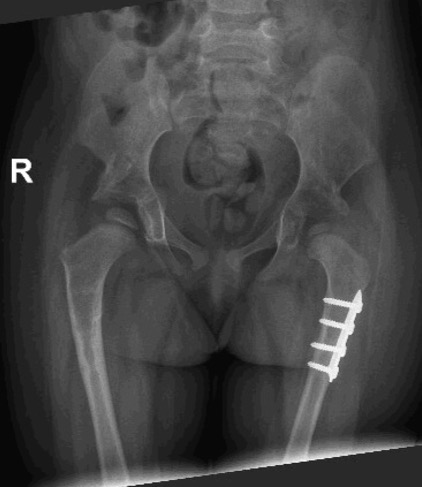 Figure 9: AP pelvis in a 3-year-old female who underwent staged bilateral open hip reductions with pelvic and femoral osteotomies. The left femur plate will be removed at a later date.

Long-term follow up is essential as residual dysplasia may occur as often as 10-20% even after successful treatment of DDH. Occasionally, additional surgeries are required later in life to ensure proper development of the hip socket in order to minimize the risk of early osteoarthritis.

The exact causes of DDH are unknown, but it is likely a combination of several environmental and genetic factors. Known risk factors include:

In the United States, DDH is commonly treated at a very early age, but in low-income countries this condition may go undiagnosed and untreated. While this does not affect normal child development, older children and young adults with untreated hip dislocations often have decreased quality of life due to pain and limitation of function.

DDH was previously referred to as congenital dislocation of the hip (CDH). This terminology changed over the last decade due to the recognition that some infants will have a normal hip examination at birth but develop hip disease during the first year of life.

Recognize the variable presentation of DDH. Understand the different clinical presentations that depend upon patient age and severity of hip instability. Explain treatment options for DDH, including the Pavlik harness, bracing, closed and open reduction techniques.