Describe “bone remodeling” and its role in health and disease.

“Bone remodeling” is a term that refers to the biologic processes of osteoclasts removing (or “Chewing”) older, worn out pieces of bone, with osteoblasts synthesizing (Building) new bone to replace them.

Osteoclast might “chew” bone not only to remove tissue damaged by wear and tear, but to liberate calcium and other ions. Indeed, that is the dominant function. That is, if the body needs calcium it will “debone the bone” even if it thereby sacrifices the structural integrity of the skeleton.

Note that the word “chew” was chosen advisedly (over, say “clear” or some other “c-“ word). The Greek root of the “-clast” suffix, klastes, means “to break.” Indeed, osteoclasts do break the organic matrix of the bone. Mineral in bone cannot simply be dissolved. Rather, the bone tissue itself must be metabolized, with the ions liberated thereafter. That implies if the body needs calcium even momentarily, it cannot “borrow it” from the bone by dissolution and let it seep back in when stores are higher; it must break down the bone, much like a person who needs money might have to cash in his or her retirement fund (and a pay a tax penalty accordingly). Neither calcium in the bone nor dollars in a retirement fund are liquid assets.

There are two phases of bone remodeling: resorption and ossification.

In the bone resorption phase, osteoclasts break down the organic tissue in bones and release into the bloodstream the minerals therein, especially calcium, but also magnesium and phosphate. The osteoclast breaks down the bone by secreting collagenase and other lytic enzymes.

Ossification is the process of laying down new organic matrix by osteoblasts. 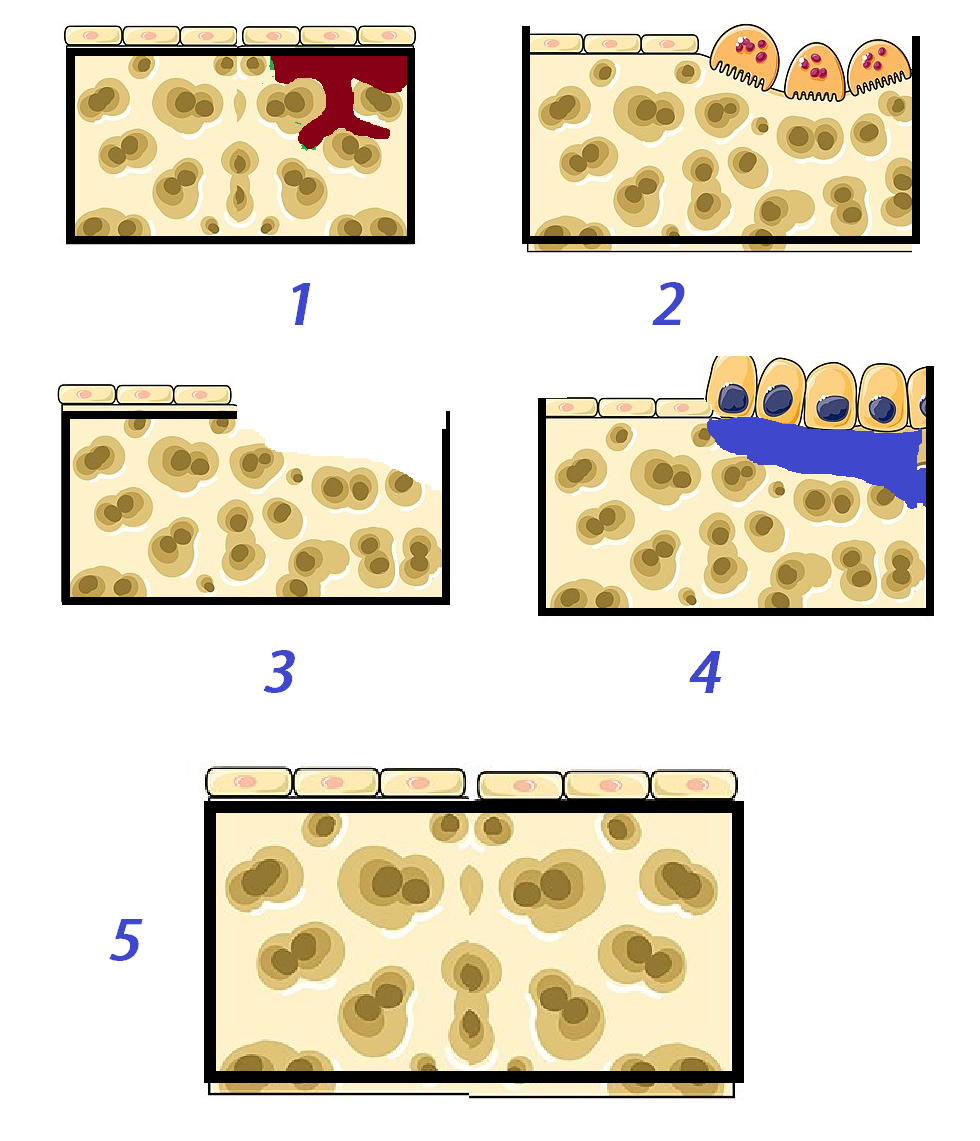 In any given year, about 10% of the adult skeleton is remodeled.

Normally, osteoblast and osteoclast activity is tightly coupled to ensure maintenance of normal bone density and proper healing. The process is very sensitive to the body’s demand for calcium but also responds to load. Recall that the bone participates in mineral homeostasis (ensuring normal ion levels), as well as skeletal homeostasis (ensuring structurally sound bone). As a general rule, the former takes precedence: the body will sacrifice structural integrity to ensure that calcium levels are normal. After all, heart contractility and nerve transmission require normal levels of calcium and are prioritized over skeletal movement.

At times, osteoblast activity dominates. For example, in response to weight training, “loading” of bone will trigger osteoclasts and osteoblasts to reorganize bone matrix in the direction of force and increase bone density. Also, after a long-bone fracture, osteoblasts lay down new bone as the final step in the healing cascade. (See question on fracture healing.)

In some clinical conditions known as metabolic bone diseases, bone remodeling is perturbed and there is increased osteoclast activity. Two main ones to think about are hyperparathyroidism and osteoporosis.