Why might successfully treated developmental dysplasia of the hip have a better prognosis than SCFE and Perthes?

Developmental Dysplasia of the Hip (DDH), Slipped Capital Femoral Epiphysis (SCFE, pronounced “Skiffy” by the cognoscenti), and Perthes (pronounced Per’-theeze) Disease are pediatric hip conditions that can lead to arthritis of the hip later in life (Figure 1).

DDH left untreated in childhood presents the biggest treatment challenges because it, uniquely among the three, affects both the femoral head and the acetabular side of the joint as well.

Figure 1: Pediatric Hip Conditions. DDH: Note head out of normal position, high riding on ileum; absence of normal socket; distortions of femoral head and it is no longer constrained by socket geometry. Perthes: Note death of femoral head with collapse. SCFE: Note slipping at the epiphysis.

DDH, formerly known as congenital dislocation of the hip, is also unique in that it is an intra-uterine developmental condition. Accordingly, if recognized early and treated expeditiously, the pathology of DDH can be “rerouted,” allowing postnatal development to correct the pathology that started to form before birth. Thus, among DDH, SCFE, and Perthes disease, successfully treated DDH has the best long-term prognosis.

SCFE is a hip condition typically affecting children age 10 to 14, where the head (“capital”) of the femur (the epiphysis) slips off the femoral neck. This is growth plate injury**. Treatment includes pinning of the femoral head to halt progression. Deformity can still persist, but the goal is to prevent the deformity from worsening.

Perthes Disease is an eponym for osteonecrosis of the femoral head in children thought to be caused by disruption of the blood supply. Successful treatment in Perthes is largely up to chance; many patients will heal without treatment, while many patients who undergo treatment will see no improvement in their conditions.

Unlike SCFE and Perthes, DDH is truly curable and is treated by relocating the hip, ideally in the first days throughweeks of life. This helps to preserve the normal anatomy of the hip’s ball-and-socket joint. The proper positioning of both the femoral head (ball) and acetabulum (socket) promotes normal development of the hip joint. Thus, early treatment can help prevent permanent deformity.

While arthritis secondary to DDH is the easiest to prevent, it is among the three the most difficult to treat. This is because it is a disease of both the femoral head and the acetabulum. (Both SCFE and Perthes Disease are femoral head disorders, and any acetabular damage is secondary, appearing later in the disease course, if at all.) The distortions of both the femur and acetabulum are shown in Figure 2. 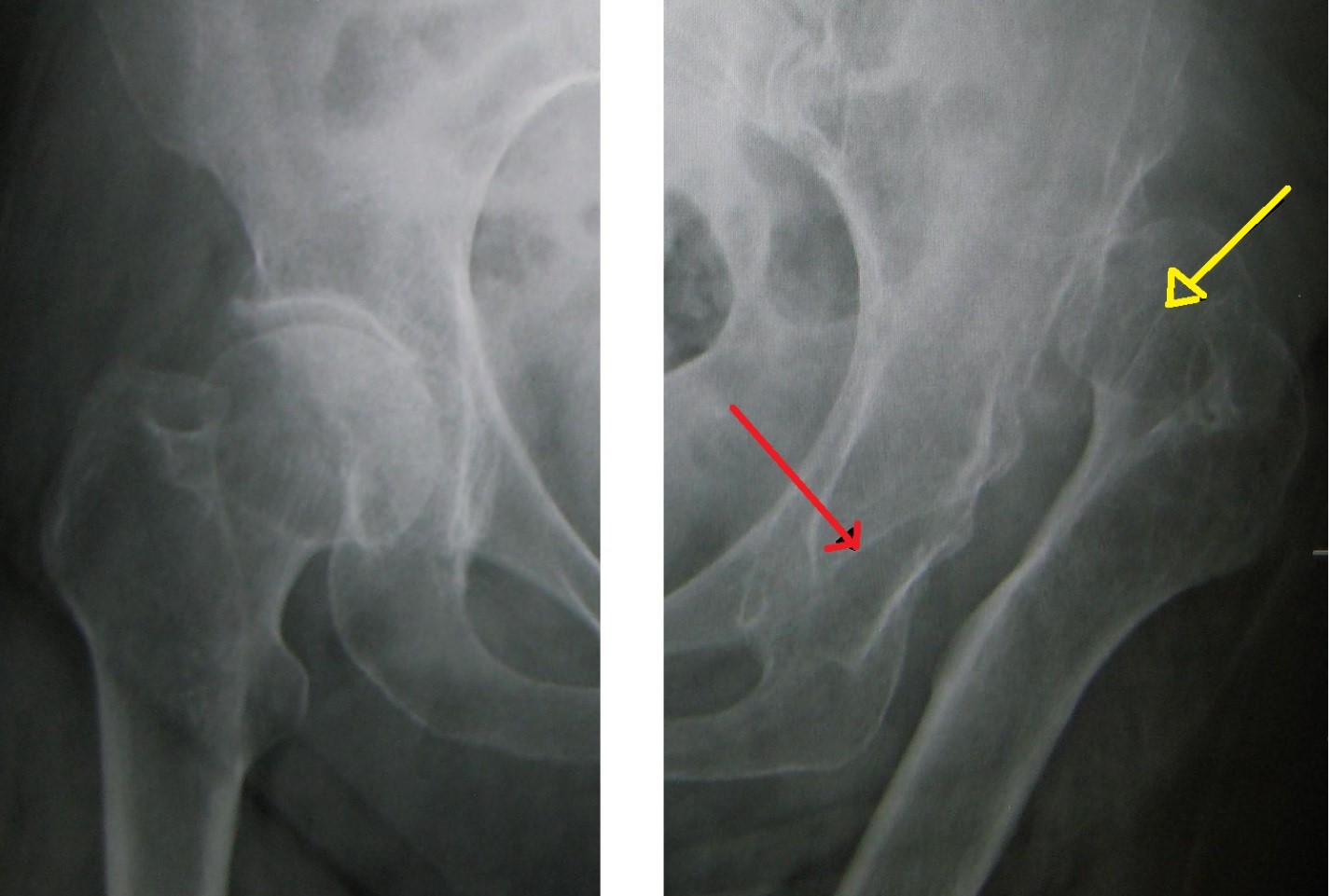 Figure 2: A normal hip is shown in the panel to the left, and a dysplastic hip (in the same individual) on the right. The red arrow points to the shallow acetabulum and the yellow arrow points to the high-riding, abnormally-shaped femoral head. (modified from Wikipedia)

Accordingly, if a surgeon were to try to treat long-standing DDH by relocating the hip, because the native femoral head is not in the pelvis but “riding high,” sitting somewhere along the ileum and proximal to the correct location, a relocation maneuver may stretch and damage the blood vessels***. Also, the socket may be so distorted that it cannot accommodate the hip. (As Gertrude Stein said of Oakland, “there is no there there.”) Further, if the surgeon were to try to insert an artificial joint (a prosthetic ball and socket), the distortions of the acetabulum make it difficult to secure the acetabular component in the pelvis.

In conclusion, DDH, SCFE, and Perthes disease are all pediatric hip conditions that can progress to arthritis later in life. Of the three, only DDH is truly curable, with early treatment being paramount for optimal outcomes. If left untreated, the arthritis secondary to DDH is also the most difficult to correct, due to deformity of both the femoral head and acetabulum.

**  The epiphysis of the proximal femur is the growth center that forms the femoral head. The slippage

*** This is similar to what is seen in a traumatic hip dislocation, but in the reverse direction. Either way, blood vessels that are sitting in place for a long time don’t like to be moved from that place!

Joe is the first footnote complete or cutoff midsentence?