Compression neuropathies of the arm 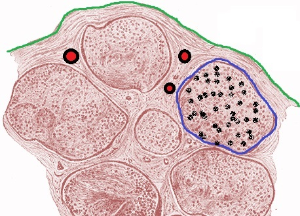 Figure 1: The anatomy of a nerve, showing endoneurium (black) around the axons composing the fascicle, in turn surrounded by perineurium (shown in blue) and then epineurium (shown in green). (Modified from wikipedia. http://bit.ly/1Sydsqv)

Mild nerve compression produces a reduction in epineural blood flow. Prolonged compression can then reduce endoneural blood flow and produce ischemia. Ischemia leads to breakdown of the blood–nerve barrier. Antigens released within the perineurial space then can incite an inflammatory response.

Eventually, scar tissue may form, and in turn irreversible damage to the nerve may result.

When patients with compression neuropathy undergo surgical decompression, the compressed nerve often is indented at the point of compression. Synovitis, sclerosis, fibrous hypertrophy, and edema of the synovium are also seen.

The individual nerves each have their own so-called "sensory domain", that is, area of skin whose sensation is provided (exclusively) by that peripheral nerve (Figures 2-4). As such, a sensory examination (or related complaints) can help hone the diagnosis. 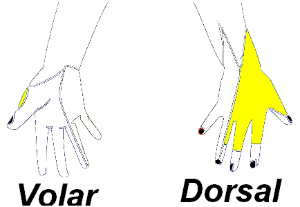 Figure 2: The sensory domain of the radial nerve shown in yellow. Modified from wikipedia 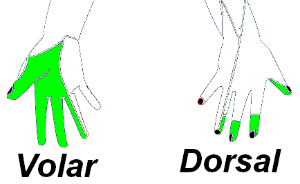 Figure 3: The sensory domain of the median nerve shown in green. Modified from wikipedia 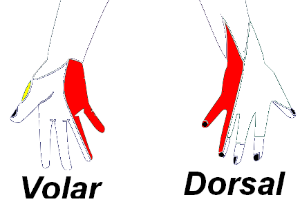 Figure 4: The sensory domains of the ulnar nerve shown in red. Modified from wikipedia

The nerves to the hand also have unique motor function. For example, the radial nerve supplies the muscles that extend the wrist; thus, radial nerve dysfunction leads to a wrist drop. (Other examples are detailed below.)

Cubital tunnel syndrome (ulnar nerve compression near the elbow) may be caused by the presence of an accessory muscle, the anconeous epitrochlearis. This muscle, present in about 1/4 of the population, can become edematous and press on the nerve.

Cubital tunnel syndrome may be aggravated by or associated with prolonged periods of flexing the elbow, such as during sleep or holding a phone while working at a desk.

Radial nerve compression may arise from prolonged pressure on the nerve from the surrounding muscles in the proximal forearm area, or from direct pressure to the posterior aspect of the arm. This direct pressure mechanism is seen in patients who fall sleep on their arms; when it is another person's body that exerted the pressure, the condition is known as "honeymoon palsy." 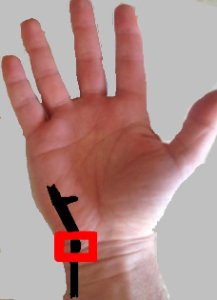 Figure 5: The approximate surface landmarks of Guyon's canal are shown in red, through which the ulnar nerve (black) passes.

Compression neuropathy presents as numbness, weakness, pain, or a mixture thereof. The symptoms produced depend on which nerve is involved, where along the nerve it is being compressed, and the severity of the condition.

Common symptoms of cubital tunnel syndrome, a compression neuropathy of the ulnar nerve at the elbow, are numbness of the small finger, and ulnar half of the ring finger. There may be associated complaints of hand weakness or muscle wasting (causing visible deformity of the hand).

When compression of the ulnar nerve occurs more distally around the wrist and hand (i.e. within Guyon’s canal), patients report altered sensation on the palmar surfaces of the small and ring fingers but have normal sensation on the dorsum of the hand. There may also be weakness of the intrinsic muscles of the hand. Ulnar nerve dysfunction may produce a so called Wartenberg’s sign (Figure 6); more subtle weakness will be seen only with provocative testing (Figure 7). 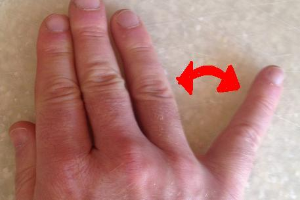 Figure 6: Wartenberg’s sign is found when a patient's small finger remains Abducted despite an instruction "bring all of your fingers together." The finger may even rest in this position because the extensor tendons pass slightly ulnar to the midpoint of the finger and thus exert a slight abduction force. If the ulnar nerve is dysfunctional, the extensors (which are innervated by the radial nerve) will overpower the intrinsic adductor muscle innervated by the ulnar nerve and the finger will "escape" as shown. 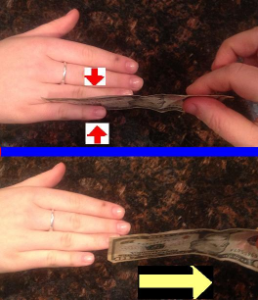 Figure 7: Ulnar nerve dysfunction leading to subtle weakness. More subtle weakness of adduction can be demonstrated by asking the patient to hold a piece of paper between the ring and small fingers (by adducting them, as shown by the red arrows in the top photo. If the ulnar nerve is dysfunctional, the force of adduction, though sufficient to bring the fingers closer together than what is seen with frank paralysis, will not be able to hold on to the paper.

The radial nerve runs along the humerus, and compression in the posterior aspect of the upper arm may produce weakness in wrist extension (causing a so-called ‘wrist drop’ (Figure 8)), weakness in finger extension (including the thumb), and decreased sensation along the dorsum of the hand. If the pressure on the nerve is more distal in the proximal forearm, there may be soreness in the mobile wad area of the proximal forearm and the posterior interosseous nerve alone is affected. The main weakness is of finger and thumb extension; wrist extension will be relatively spared and there are no sensory changes. 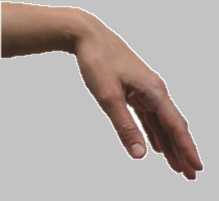 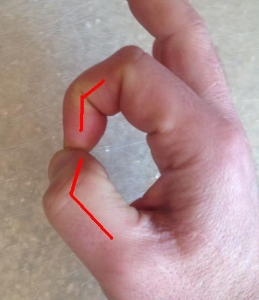 Figure 9: This figure shows intact anterior interosseous nerve function. When the patient is asked to make an "OK sign", there is flexion present at the thumb IP joint and index finger DIP joint. 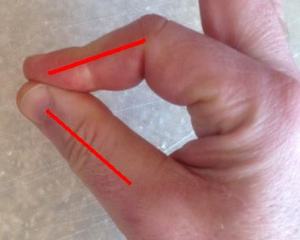 Plain x-rays may be used to detect underlying anatomic abnormalities such as bony spurs or fracture fragments that may be a source of compression.

Magnetic resonance imaging may identify tumors or cysts that can compress nearby nerves. MRI is frequently indicated to evaluate for a mass in ulnar nerve compression at Guyon's canal.

Electrodiagnostic tests -- nerve conduction studies and electromyography -- can test the function of specific nerves. Because there is a fairly high prevalence of abnormal results on nerve conduction studies and electromyography (both false positives and false negatives), these tests are best considered as tools as an adjunct to physical examination, but not for screening purposes.

The incidence of cubital tunnel has been measured in one study to about one in 5,000 (PMID: 15993135). The incidence for the other peripheral neuropathies is known to be lower, but albeit imprecisely so. Note that mild forms of compression neuropathy will not be reported, as such patients will not present for care.

The differential diagnosis of compression neuropathy can be categorized into three main areas:

Distinguishing a cervical radiculopathy from a compression neuropathy may be difficult. As shown, the differences between sensory areas are subtle (Figure 11). The main distinction is that the sensory symptoms of a compression neuropathy typically are located more distally, in the hand only. Also, the weakness tends to be less severe in cases of cervical radiculopathy, as the affected muscle has input from other cervical levels. (This of course gets confusing when multiple cervical levels are involved, as may be the case.) Focal neck complaints may be the main distinguishing feature of cervical rather than extremity disease.

Figure 11: The close resemblance between the sensory distribution of the C8 nerve root and that of the ulnar nerve. The "textbook" distinction, namely, that the ulnar nerve supplies only the ulnar side of the ring finger, is not reliable enough for clinical use.

Generalized complaints, involvement of multiple extremities and central or cranial nerve disturbances are all worrisome and suggest a diagnosis beyond a compression neuropathy. Tongue fasciculations, visual changes, altered gait and a sense of imbalance in particular suggest neurologic disease.

Logically, the treatment of a compression neuropathy should be the decompression of the nerve. Nonetheless, a non-operative approach centering on modification of activity may be sufficient, as the compression may have indeed been produced from overuse. Also, some patients may improve spontaneously or learn to tolerate their symptoms (if mild).

At times, splinting the wrist or elbow can minimize the pressure on the nerve. Better still, offending activities should be stopped. For example, avoiding riding a bicycle or hyperflexing the elbow may completely relieve compression of the ulnar nerve at the wrist and elbow respectively.

Mechanical risk factors for compression of the ulnar nerve at the elbow include a supracondylar (distal humerus) fracture in childhood, causing a so called “tardy” (or late-appearing) ulnar nerve palsy and chronic valgus stress, as from pitching in baseball.

Because many patients with a compression neuropathy are apt to get better spontaneously, there are probably many patients who, having tried a non-traditional approach to treatment, will credit this treatment for their (truly spontaneous) recovery. Even "traditional treatments" may benefit from this line of thinking: e.g., the beneficial effect of local injections may be on the basis of a placebo effect. In general, any treatment that “amuses the patient while nature takes its course,” as Voltaire put it, may be reasonable as long as it does not put the patient at risk. In that regard, patients with nerve ischemia may progress from a state of reversible neuropathy to one of permanent damage; and thus, not always is a “watch-and-wait” approach risk-free.

The use of poor-fitted crutches can lead to a compression neuropathy of the axillary nerve: crutches that are too long can press into the axilla.

As noted, the term “honeymoon palsy” refers to a compression neuropathy (typically of the radial nerve) that results from excessive pressure on the arm from one’s bed mate. Cheiralgia paresthetica is the name for sensory abnormalities in the radial nerve distribution from tight handcuffs or other causes.