Collateral Ligament Injuries of the Knee

The knee has very little inherent bony stability: it has been described as two matchsticks held together by rubber bands. These “rubber bands” are the four main ligaments: the two cruciates, anterior and posterior; and the two collateral ligaments, medial and lateral (Figure 1 and Figure 2). These ligaments work in tandem to stabilize the knee. Other soft tissue structures, including the capsule, and the menisci also help provide stability. In general, the cruciates prevent anterior and posterior displacement of the tibia relative to the femur, and the collaterals provide side to side stability. 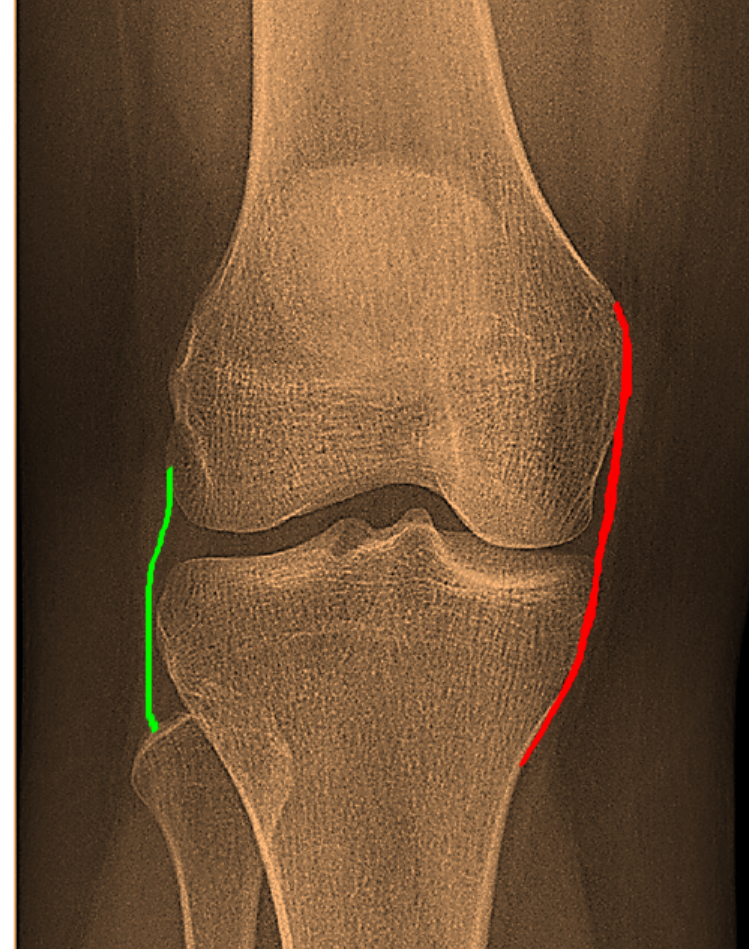 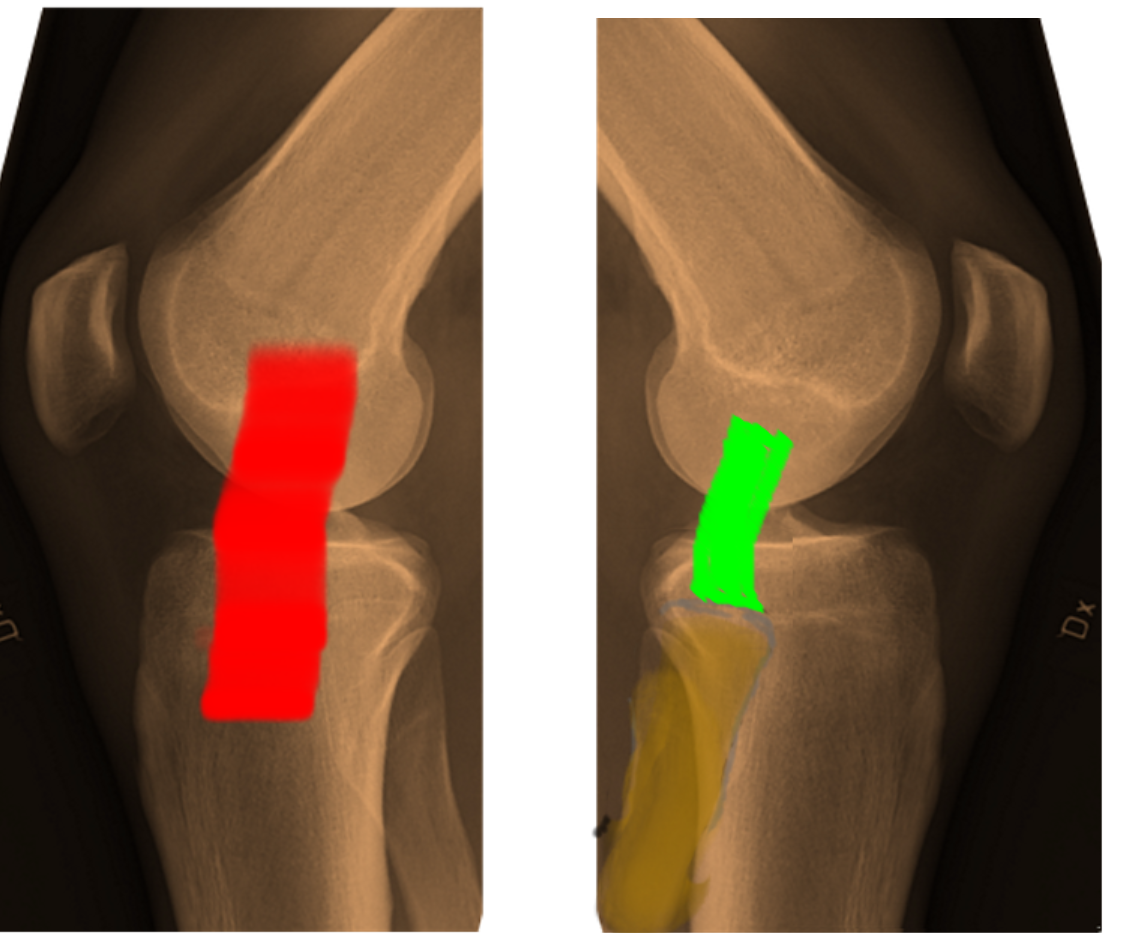 The main function of the medial collateral ligament, the MCL, is to resist valgus (knock-knee) deforming forces such as those generated by a blow to the outside of the knee with the foot planted.

The MCL consists of two bundles: a superficial bundle (the primary restraint), and a deep bundle, also known as the coronary ligaments (the secondary restraint). Additionally, the MCL works in concert with the ACL to resist axial rotation of the knee. The MCL originates from the medial femoral epicondyle and inserts on the medial proximal tibia extending down several centimeters. The deep bundle of the MCL attaches to the medial meniscus and is separated from the superficial bundle by a bursa. Posterior fibers of the deep MCL blend with the posteromedial capsule and posterior oblique ligaments. The MCL can accept up to 4000N of force without tearing.

The main function of the lateral collateral ligament, the LCL, is to resist varus displacement.

(A word on terminology: a valgus deformity is one in which the distal part is angled away from the midline; varus is in one in which the distal part angles towards the midline. At the knee, where these terms are most frequently used, it may be easier to simply memorize that valgus is “knock knee” and varus is “bow legged”. These are shown in Figure 3.)

Figure 3: A normal alignment of the knee to the left; valgus in the middle; and varus to the right

The LCL itself is much smaller than the medial collateral ligament. It originates from the lateral femoral epicondyle, posterior, superior, and superficial to the insertion of the popliteus. The LCL inserts on the fibula anterior to the popliteofibular ligament (PFL) on the fibula. The strength of the LCL has been measured at 750N vs. a varus stress. Stability on the lateral side is provided by the popliteus muscle and tendon as well as a collection of ligaments known as the “posterior lateral corner”.

Patients presenting with MCL Injuries usually describe being hit on the outside of their knee.  There may be pain on the medial side where the ligament tears; there may be pain on the lateral side where the blow was sustained or where the femur and tibia contuse each other; and in the cases of a complete rupture of the ligament, there may be, surprisingly, little focal pain at all – just a general sense of difficulty ambulating and instability of the knee.

On physical exam, there can be tenderness to palpation along the medial joint line and more proximal. Ecchymosis may be present as well. A knee effusion may or may not be present. An effusion might be absent with a complete rupture of the medial collateral ligament as the torn tissue will let the joint fluid escape.

To isolate the medial collateral ligament on examination, stability is assessed with a valgus stress test at 30 degrees of knee flexion (Figure 4). In full extension, there is additional stability from the capsule that may mask a less severe MCL injury. If there is gapping in full extension, a combined injury is suspected. 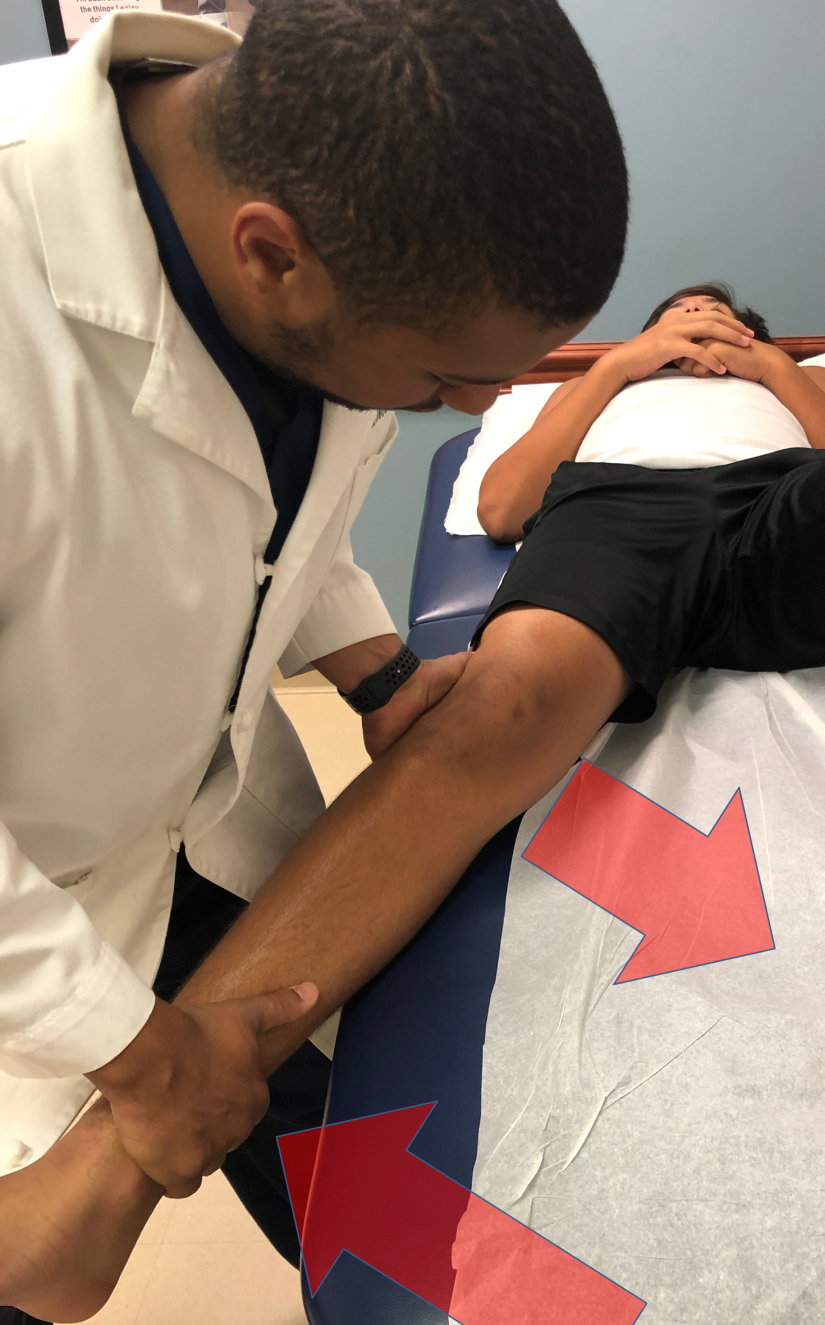 The grading of medial collateral ligament sprains is by the usual I, II and III classification, in which a Grade I sprain has little or no gapping on examination and a Grade III sprain, representing a complete tear, is defined by more than 10 mm of gapping or more than 10 degrees of increased valgus angulation. A Grade II sprain, characterized by plastic deformation of the ligament, will show some gapping but less than 10 mm.

An important aspect of the physical exam in these injuries is to evaluate the neurovascular structures of the knee. Evaluation of the saphenous nerve by checking sensation along the medial portion of the lower leg as well as palpation of the popliteal artery and distal vessels of the foot is necessary.

Injuries to the lateral collateral ligament are often in combination with other injuries, and the history and physical examination findings will be dominated by the other injuries. Stability against varus forces is assessed by analogous means, namely attempting to reproduce gapping with the knee in 30 degrees of flexion (Figure 5). 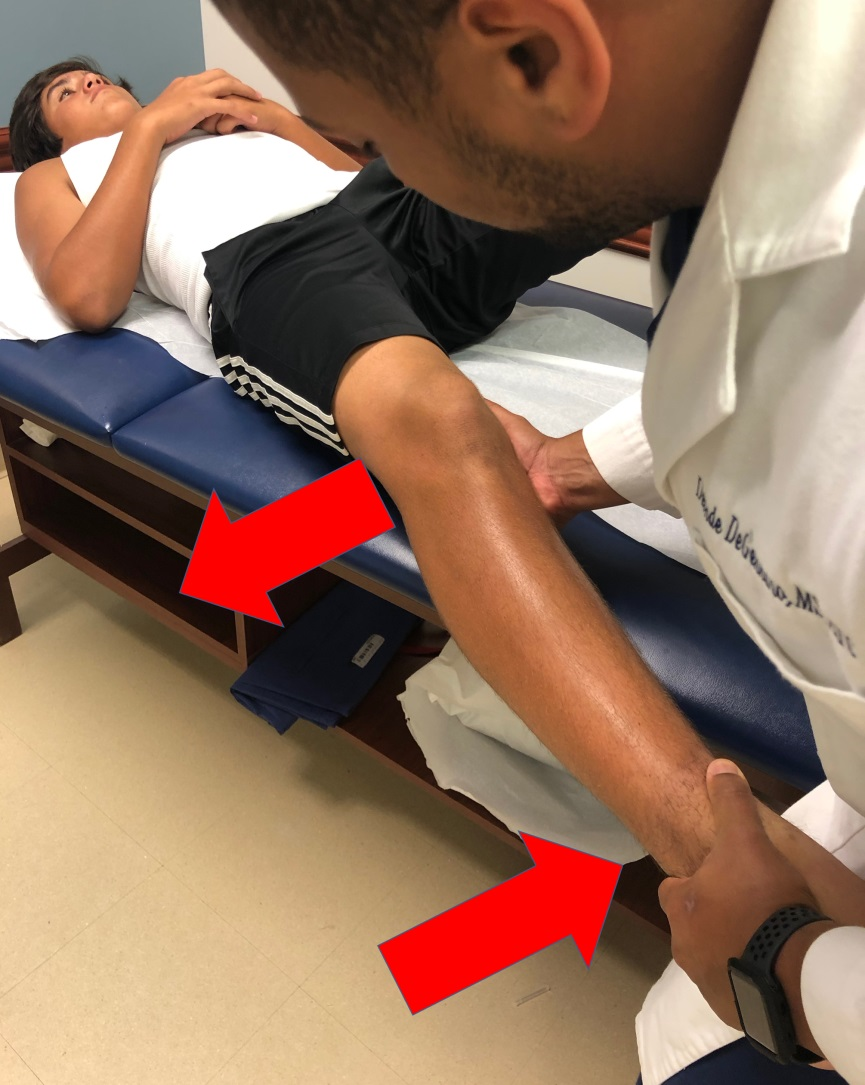 Figure 5: Varus stress test. The knee is slightly flexed and a lateral force is applied to the knee and a medial force on the ankle.

A thorough neurovascular exam should be performed to evaluate for injury to the common peroneal nerve when an LCL injury is suspected. A varus deforming force will apply traction to the nerve; because the nerve is tethered to the fibula, not much traction can be tolerated without injury.

High velocity mechanisms such as automobile accidents are apt to tear more than one ligament. A thorough physical exam is extremely important in these patients, including a thorough vascular exam. If there are multiple ligament injuries present, the knee joint may dislocate or subluxate. The incidence of an injury to the popliteal artery is approximately 50% in the setting of a knee dislocation.

After a thorough vascular exam, sensation should be assessed distinctly in the tibial, deep peroneal and superficial peroneal distributions. Motor examination should include flexor and extensor hallucis longus, tibialis anterior and gastrocnemius to establish baseline. The incidence of nerve injury ranges from 4.5% to 40%. The most commonly affected nerve is the common peroneal nerve, however isolated tibial nerve palsy has been reported.

Patients with some arthritis can present with a slight laxity on valgus stress testing with an intact medial collateral ligament. This is known as pseudo-laxity. The phenomenon is produced by the loss of articular cartilage causing narrowing of the medial joint space, which can then be corrected by the application of an external force.

For a patient presenting with a knee injury and possible ligamentous damage, radiographs with anteroposterior and lateral views are indicated.

Medial or lateral widening suggests possible ligament disruption. Considering that stress x-rays could worsen a partial ligament injury, they are not advised – especially since they are not apt to change the acute care management, and MRI can provide the same information, if not more.

For acute knee injuries, an MRI is extremely helpful. An MRI can provide information about severity (complete vs. partial rupture) and location (avulsion vs. mid-substance tear). Of course, an MRI will also pick up associated injuries. For chronic conditions, it may be helpful to employ an MRI if and only if the anticipated results of the test will dictate management (Figure 6). 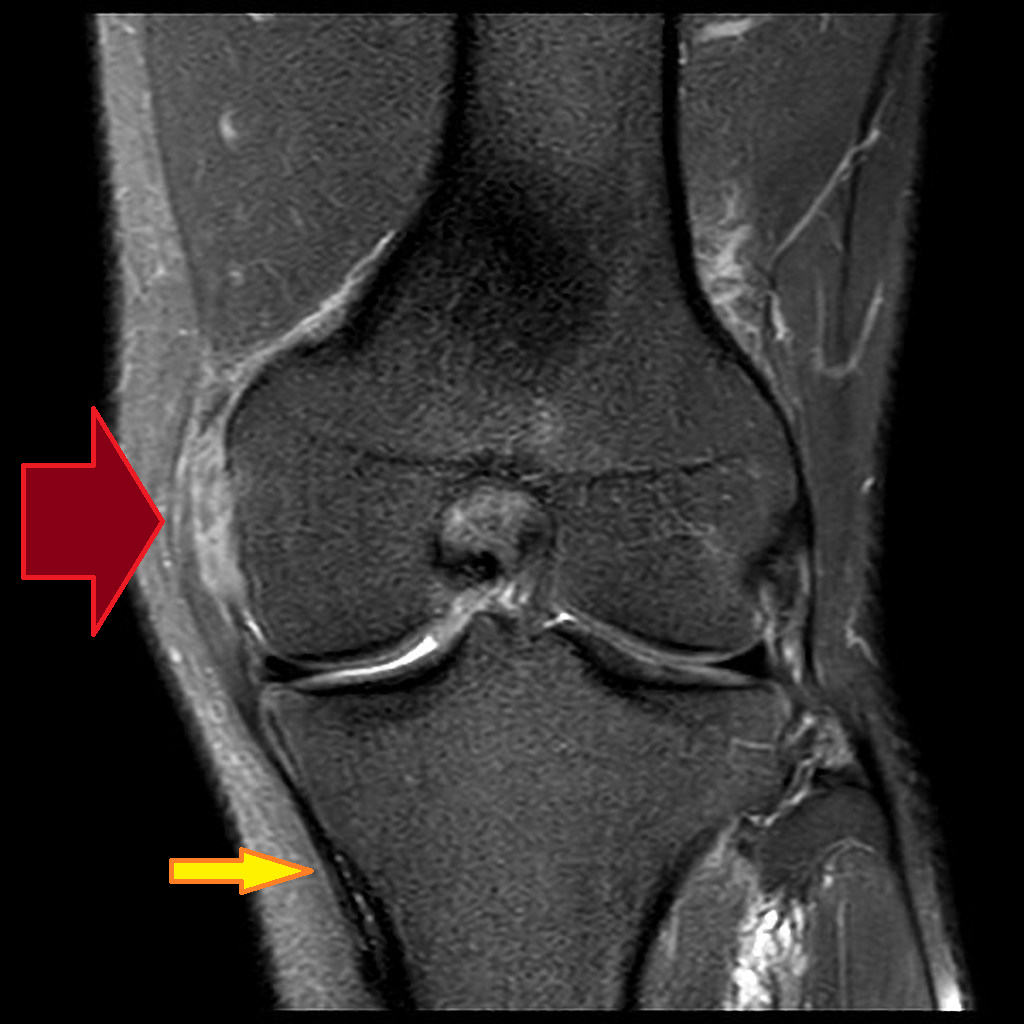 With chronic MCL injuries, calcification at the medial femoral insertion site may be seen. This is known as a Pellegrini-Stieda lesion (Figure 7). 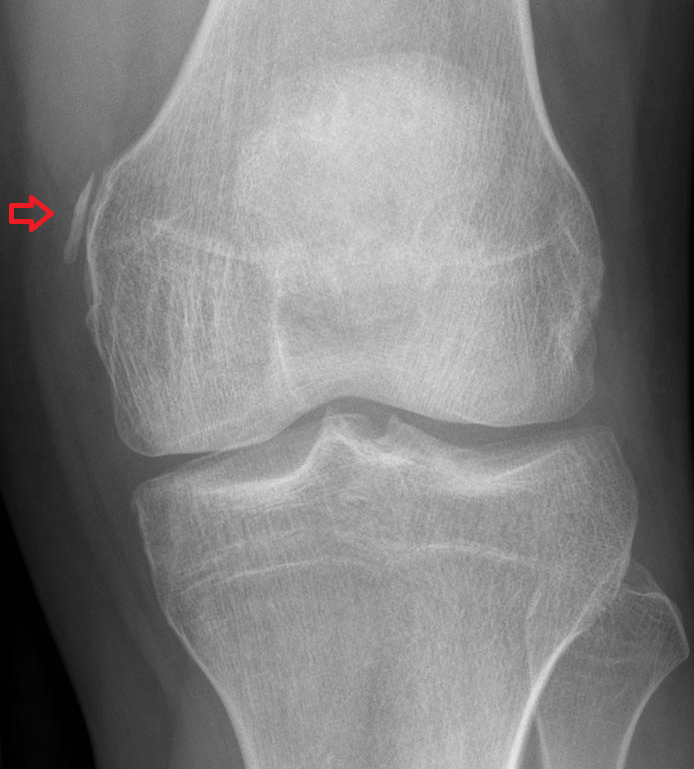 Figure 7: A Pellegrini-Stieda lesion. A sliver of calcification is shown by the arrow. (Case courtesy of Dr. Charlie Chia-Tsong Hsu, Radiopaedia.org, rID: 18248)

Collateral ligament and multi-ligamentous injuries can occur in a variety of mechanisms thus leading to a very diverse patient population who suffer from these injuries. The most commonly injured ligament of the knee is the MCL.

In addition to the collateral ligaments, the cruciates, the menisci, the extensor mechanism and the articular surfaces might be damaged by a sports injury. It is especially important here to remember the veterinary maxim ‘a dog can have both lice and fleas’, meaning the discovery of one injury does not signify the end of the examination as combined injuries are commonly seen.

In pediatric patients with open growth plates (physes), it is important to note that the MCL is typically more robust than the distal femoral physis, and thus, more resistant to injury.  A suspected MCL tear in a patient with an open distal femoral growth plate, therefore, is more likely to have a physeal injury (fracture) than an MCL sprain and this may warrant a different treatment strategy.

Injury to more than one ligament suggests the possibility of injury to the popliteal artery or common peroneal nerve.

A loss of passive range of motion suggests interposed tissue (such as a piece of meniscus or articular cartilage). Another possible cause of blocked motion is “button holing” of the femoral condyle through the capsule. This finding is a clue to a more severe injury.

Because it is extra articular, the medial collateral ligament has good healing potential. Placing the patient in a brace can stabilize the knee and allow the ligament to heal at the appropriate length. Indeed, even if surgery is needed for other ligament injuries, it may be reasonable to allow the MCL to heal first.

Once some healing has taken place, physical therapy for quadriceps and hip adductor strengthening is indicated.

Operative repair may be considered for complete (Grade III) tears especially in the setting of multi-ligament knee injury. Another indication for surgery is if there is a displaced distal avulsion present–that is, if the MCL pulls off its tibial attachment. Surgery is needed because if the distal MCL retracts proximally, the pes anserine tendons will block healing.

For chronic injuries, or when there is loss of adequate tissue for repair, a reconstruction with either allograft or autograft is performed.

Treatment of LCL injuries is usually dictated by the presence of any associated injuries.

Most people with injuries to the medial collateral ligament will make a good functional recovery, but may require three months to get there.

Outcomes of LCL injuries are usually dictated by the response to treatment for the associated injuries.

Risk factors for ligament injuries of the knee include participation in sports and obesity.

In high performance athletes who were unwilling to not play, the risk of MCL injuries (or worsening of an already present mild injury) may be mitigated by functional bracing.

Although the terms MCL, LCL, ACL and PCL are commonly used (and used above, as you see) all four sound sufficiently alike, especially to a lay person, that it may be better to avoid these shibboleths and sound out the words: “medial collateral”, “anterior cruciate”, etc..