Both the spinal cord itself and the exiting nerve roots are subject to compression in the cervical spine. Compression neuropathy of the nerve roots is termed radiculopathy; pressure on the cord can produce myelopathy. Radiculopathy can be caused either by chronic overgrowth of the bone and soft tissue or by acute disc herniation and presents as unilateral arm pain, paresthesias, and weakness in the area supplied by the compressed nerve. Myelopathy is usually caused by degenerative cervical spondylosis and presents in older patients as bilateral paresthesias, loss of dexterity, and impaired gait. Myelopathy can also be acute due to a large central disc herniation that compresses the spinal cord. Traumatic injuries to the cervical spine that result in bony or soft tissue compression of the cervical spinal cord can also cause myelopathy.

The spinal cord exits the cranium and travels through the foramen magnum to enter the spinal canal. In the cervical spine, parts of the cord become cervical nerve roots and exit through their neural foramina. The remaining cord passes to the thoracic and lumbar regions.

The cervical canal is normally about 17mm in diameter but does vary by individual. Thus, the amount of space for the neural elements is best considered in relative terms: ratio of the sagittal diameter of the canal to the corresponding measurement of the vertebral body. (This is known as the Torg-Pavlov ratio and is usually equal to 1.) (Figure 1). 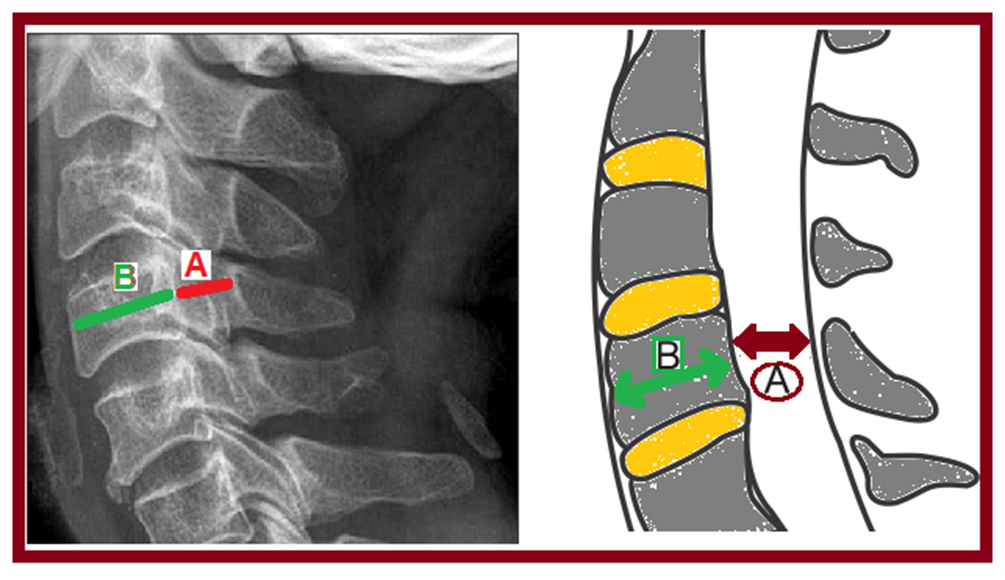 Figure 1: To calculate the Torg-Pavlov ratio, sagittal diameter of the spinal canal (A) is measured from the posterior surface of the vertebral body to the nearest point of the corresponding spinal laminar line. The sagittal diameter of the vertebral body (B) is measured at the midpoint between the anterior surface and the posterior surface. The Torg-Pavlov ratio is A/B. (The drawing and radiograph are modified from Clin Orthop Surg. 2009 Mar; 1(1) via creative commons license.)

Congenital stenosis is also possible, although much less common. Rheumatoid arthritis, producing both synovial overgrowth as well as slippage from facet arthritis, can also reduce the amount of space available for the spinal cord.

At each cervical level, nerve roots form from a combination of the dorsal (sensory) and ventral (motor) neurons exit the spine through the lateral neural foramen. Compression of these roots, cervical radiculopathy, is caused usually by degenerative spondylosis or disc herniations. 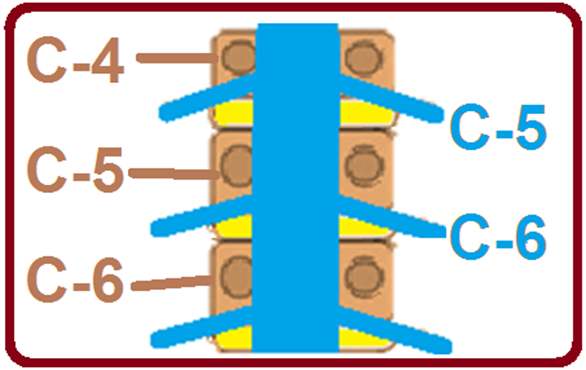 The distinctions between cervical and lumbar nerve herniations based on central vs lateral location is demonstrated in Figure 3.

Cervical spine stenosis by itself is often asymptomatic. Myelopathy and radiculopathy are not exclusive: a combined condition termed myeloradiculopathy can occur due to age-related degenerative changes in the same individual.

Myelopathy first presents with neck pain or stiffness. There is extremity numbness and tingling in a non-dermatomal distribution, usually bilaterally, affecting first the upper then the lower extremities. There is motor weakness, difficulty with fine motor function and decreased coordination; there may be gait instability and urinary incontinence with more progressive compression.

The neurologic exam will reveal weakness (though this can be subtle), and decreased ability for rapid, repetitive movements. Abnormal proprioception (as seen on the “finger to nose with eyes closed” test) may be present. Typical findings also include decreased sensation in a non-dermatomal distribution, hyperreflexia and impaired heel-toe walking.

Cord compression may be suggested by two special signs: the Hoffmann sign and the Babinski reflex. The Hoffman sign (Figure 4) is noted when there is involuntary flexion or adduction of the thumb when the examiner flicks the fingernail of the middle finger down. Babinski’s sign (Figure 5) is seen when the great toe extends involuntarily response to the examiner’s scratching the outer underside of the patient’s foot. The normal response is for the toes to curl downwards. (Babinski’s sign is also present in normal babies under the age of 2 months.) 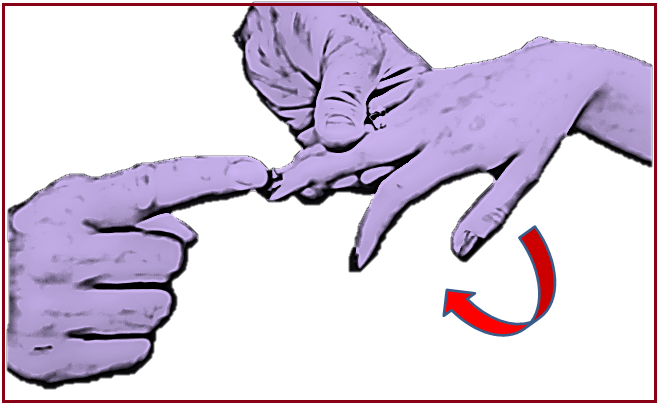 Figure 4: Hoffman sign is seen when the thumb involuntarily adducts or flexes in response to the examiner’s flicking of the index finger.

Figure 5: Babinski’s sign is observed when the great toe extends involuntarily to the examiner’s scratching the outer underside of the patient’s foot.

Radiculopathy may also present with neck pain or stiffness, but the characteristic finding is pain and paresthesias in a dermatomal distribution in the arm (Figure 6). 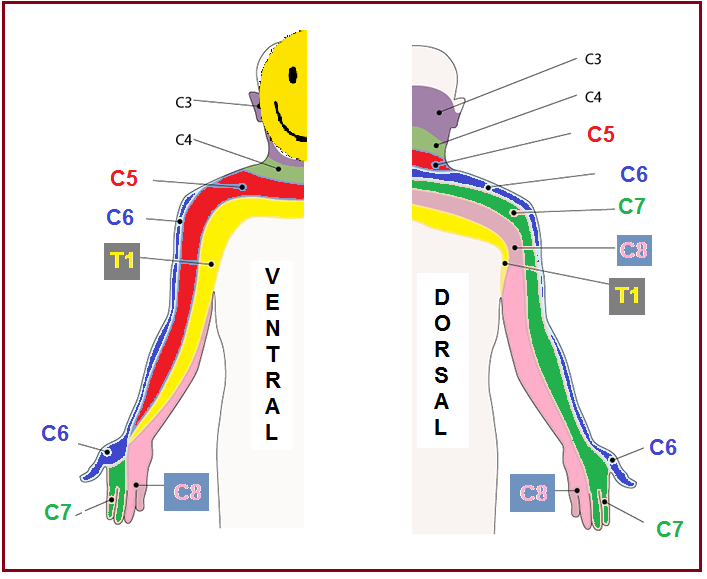 Figure 6: Dermatomes of the upper extremity. (Modified from http://www.cmej.org.za/index.php/cmej/article/view/2708/2829)

There may also be weakness and abnormal reflexes, as follows:

Figure 7: lateral radiograph showing spondylosis (degenerative disc space narrowing and osteophytic spurring) in the cervical spine. On flexion, there is an anterolisthesis of C4 with respect to C5 secondary to degenerative facet joints; this likely contributes to canal stenosis at C4/5. (Case and caption courtesy of Dr Yi-Jin Kuok, Radiopaedia.org, rID: 18348)

CT without contrast can provide information on the cervical vertebrae and cervical stenosis, but the limited soft tissue information reduces its utility. CT myelography (in which contrast is injected into the intradural space) can be used to visualize the space around the spinal cord and nerve roots in patients with contraindications to MRI, but is of course invasive and should be employed with proper prudence.

MRI is the study of choice for evaluating spinal cord or root compression (Figure 8). However, false positive findings are common. (Note that many asymptomatic people greater than 40 years of age will have some MRI abnormality). Findings must be evaluated in the context of appropriate presentation, and thus MRI should not be used as a screening test but to answer a specific clinical question. 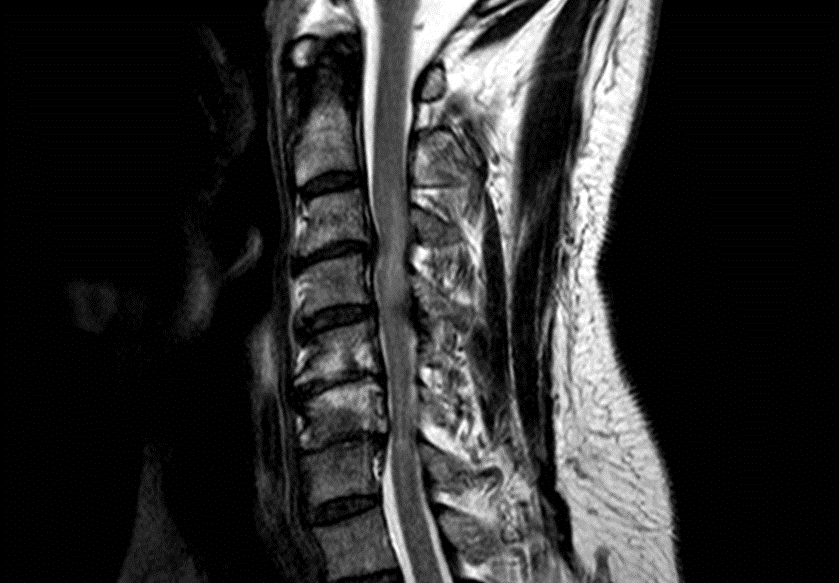 Electromyogram and nerve conduction studies can be used to localize peripheral nerve damage, however these studies are often operator-dependent and is unpleasant for many patients. This test should be used only to answer a specific question about treatment, and certainly not to rule-out cervical pathology. EMG/NCV is useful when trying to determine the extent of peripheral nerve involvement in patients with cervical myelopathy.

No specific lab findings exist for myelopathy or radiculopathy.

The exact proportion of people with asymptomatic cord compression that will go on to develop symptoms is not known. A prospective study of 199 people with cord compression seen on an MRI obtained because of neck pain or radiculopathy yet who did not show signs of myelopathy found that about 25% developed myelopathy within 2 years.

As a degenerative condition, cervical myelopathy has an increasing prevalence with age. Both sexes are affected equally, although males usually have earlier onset of symptoms (50s in men vs 60s in women). Myelopathy is responsible for approximately 4 hospitalizations per 100,000 people per year in the US.

The prevalence of cervical radiculopathy also increases with age. The incidence rate peaks between 50 to 59 years of age. Overall, the annual incidence is approximately 85 cases per 100,000 people per year in the US, with a 2:1 male to female incidence ration.

When myelopathy and/or radiculopathy are suspected, the following should be considered:

Asymptomatic cervical stenosis is not itself an indication for treatment.

Patients with mild disease with little-to-no functional impairment or moderate disease with contraindications for surgery can be treated with rest, NSAIDs and muscle relaxant medication. If there is weakness, physical therapy of the neck and affected extremities are beneficial.

When patients’ symptoms are severe or function markedly impaired, operative measures should be considered. The basic goal of all operative interventions is decompression of the spinal cord or the nerve root(s) and thereby prevent progression and restore function. Multiple surgical techniques exist, including anterior decompression and fusion (Figure 9); laminectomy with posterior fusion; laminoplasty, in which a portion of the lamina is removed to enlarge the neural foramina; and prosthetic disc replacement (Figure 10). 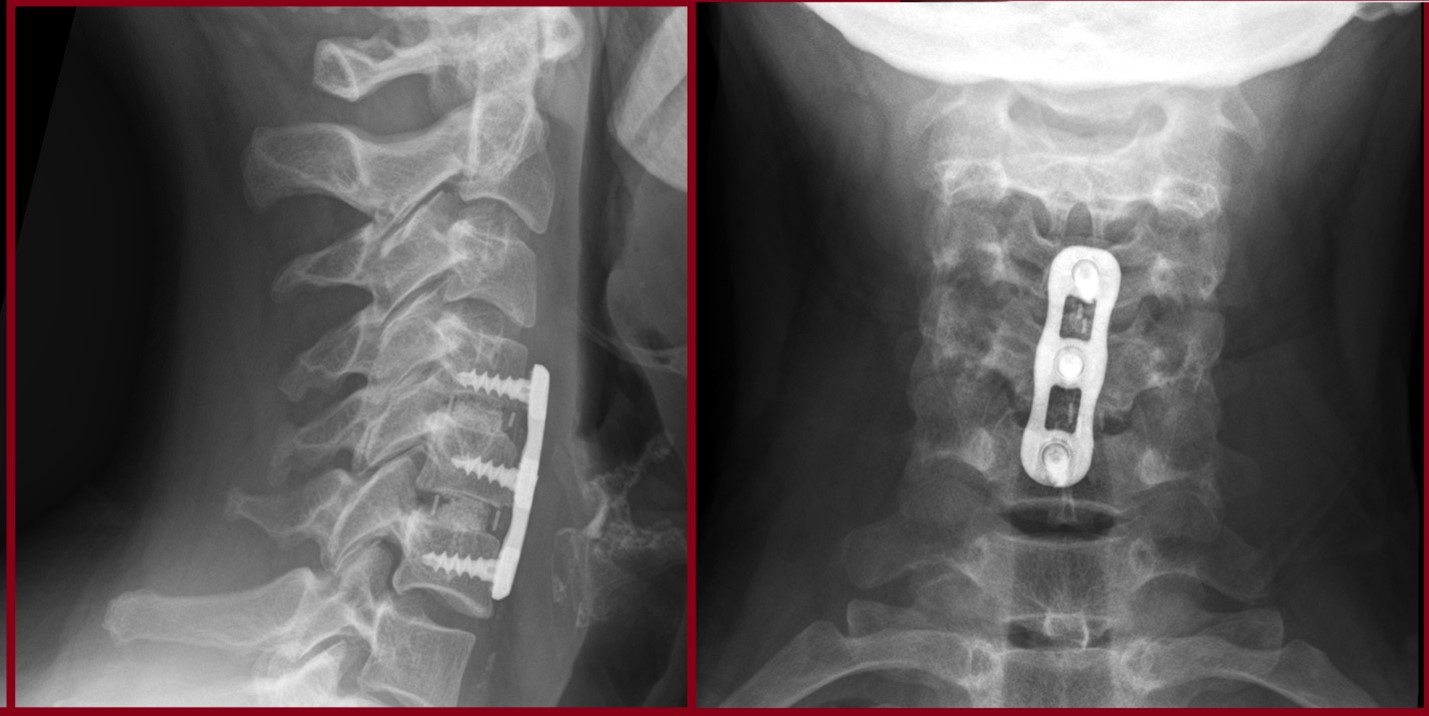 Operative outcomes are usually good for patients, with radiculopathy achieving better resolution than myelopathy. The majority of radiculopathy can resolve after operative intervention (>90% in some studies) and many patients with myelopathy report improvements in overall pain and symptoms with operative treatment. With procedures involving a fusion of the vertebral bodies across 2-3 levels, the adjacent levels are at risk for developed accelerated degeneration.

According to the Mayo Clinic (https://www.mayoclinic.org/tests-procedures/chiropractic-adjustment/about/pac-20393513, visited 7/15/2021) suggests that chiropractic might be ill-advised for cervical spondylosis, writing “Serious complications associated with chiropractic adjustment are overall rare, but may include …a herniated disk or a worsening of an existing disk herniation…[and] a certain type of stroke after neck manipulation.” Patients were advised to not seek chiropractic adjustment if they have “numbness, tingling, or loss of strength in an arm or leg” or “a known bone abnormality in the upper neck.”

The most common risk factor for cervical myelopathy and radiculopathy are age-related degenerative changes. Cervical canal stenosis, whether primary or secondary, is also an independent risk factor for developing myelopathy.

Smoking is the main modifiable risk factor for radiculopathy.

Reducing stress on the cervical spine through maintaining good posture and avoiding excessive loading theoretically can help slow the progression of the degeneration, although this is unproven.

The “Double crush hypothesis” maintains that compression of a nerve root in the cervical spine may make the distal nerve it supplies more susceptible to impairment. In particular, in the presence of cervical spondylosis or a cervical disc herniation, a patient may develop carpal tunnel syndrome with a lesser degree of median nerve compression than is ordinarily needed. The thought is that the proximal compression disrupts axonal transport along the nerve. This is intuitively appealing, but not proven. (It is likely that the hypothesis will remain unproved: proving causality would require sham-controlled, experimentally-induced nerve root compression, and that would be ethically impermissible.)

Perform a comprehensive neurologic exam, including a detailed sensory exam, to determine whether symptoms are dermatomal or non-dermatomal in nature. Know the dermatome map of the cervical nerve roots. Be familiar with provocative physical exam maneuvers that may help distinguish cervical spine pathologies from isolated shoulder/arm pathologies.