Cerebral palsy (CP) is defined by the US National Institute of Neurological Disorders and Stroke as a group of neurological disorders “that appears in infancy or early childhood and permanently affects body movement and muscle coordination. CP is caused by damage to or abnormalities inside the developing brain that disrupt the brain’s ability to control movement and maintain posture and balance. The term cerebral refers to the brain; palsy refers to the loss or impairment of motor function.”

CP is a static encephalopathy - that is, a non-progressive brain disorder - usually manifest as a disorder of movement. Babies with cerebral palsy do not roll over, sit, crawl or walk normally; older children with CP can present with poor coordination, stiff and weak muscles.

Any injury that occurs to the brain before the age of 2 may cause cerebral palsy. CP is primarily an upper motor neuron or movement disorder – however, depending on the size and location of the brain lesion, CP may affect speech, swallowing, and/or cognition. Cognitive problems can be a feature of CP, but are not always found. 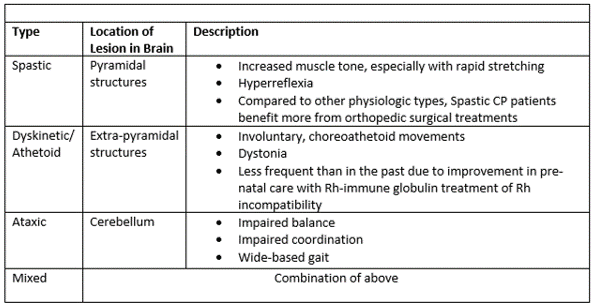 The “static” aspect of the encephalopathy implies that the lesion which affects the brain does not expand or change with time - and that is true. However, the musculoskeletal manifestations of CP are not necessarily static. Indeed, the musculoskeletal manifestations of CP often worsen as the child grows. That is because normal muscle development depends on the appropriate neurological signals - and in CP the damaged upper motor neuron fails to provide those signals. Normal bone and joint development, in turn, depend on normal muscle function and development.

Thus because of a static upper motor neuron lesion in CP patients, both the skeleton and muscle units fail to develop appropriately and there can be progressive clinical deterioration.

The static brain lesions may also give rise to seizures, which is an additional cause of morbidity (and sometimes mortality) in patients with CP.

In simple language, CP is caused by brain damage during development in utero, during birth, or during very early infancy. There are a multitude of known factors that are linked with a higher chance of causing CP (see “Risk Factors,” below). In many cases, the cause is unknown.

Children with CP will present with delayed developmental milestones, especially with independent sitting and ambulation.

The degree of severity varies greatly. Depending on the physiologic type of CP, general spasticity or dystonia and choreoathetosis (Involuntary muscle contractions causing writhing or twisting movements) may be appreciated.

Contractures of joints are common findings. Gait disturbances such as toe-walking, crouched gait, scissoring (Figure 1), among others, are frequently seen. 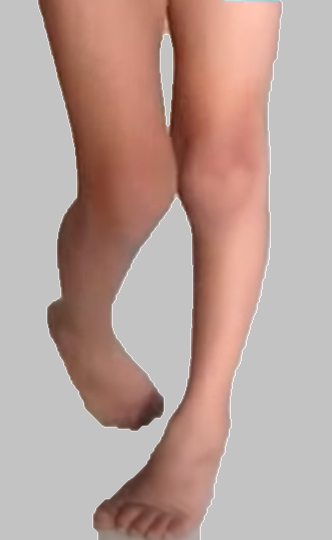 Figure 1: A scissor gait pattern. Relative tightness of the thigh adductors produces extreme adduction, causing the knees to cross in a scissors-like fashion.

Torsional deformities of the long bones may be present. These develop via a normal remodeling response to the abnormal muscle forces acting across the joints of developing bones.

People with cerebral palsy often have low bone mineral density and thin cortices of the long bones. Contractures may impede full development of the articular surfaces.

The hips in people with cerebral palsy are often subluxated or dislocated posterosuperiorly, due to a combination of abnormal muscle tone leading to abnormal acetabular development, increased femoral anteversion, and hip adduction and flexion contractures.

Neuromuscular scoliosis is also common in CP patients, especially in those with high levels of functional impairment (Figure 2). 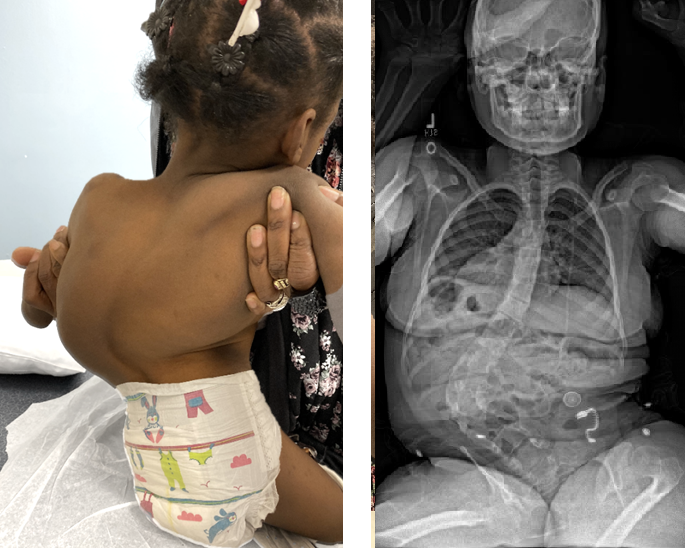 There are no laboratory tests with which to diagnose CP; it is a clinical diagnosis based on clinical manifestations.

As the child grows, radiographs of the spine, hips, lower/upper extremities, and feet may show the effects of abnormal bone and joint development due to the underlying upper motor neuron lesion.

The spine may show a scoliotic curve, which is usually long and C-shaped (as shown above in Figure 2) .

Radiographs of the long bones may reveal evidence of abnormal axial plane malrotation due to abnormal growth and development.

The feet radiographs may reveal pes planovalgus, calcaneovalgus, or cavovarus deformities as well as hallux valgus and hallux interphalangeus (Figure 4).

Figure 4: Anteroposterior and lateral radiographic views of a patient with CP and severe calcaneovalgus deformity of the hindfoot and ankle, as well as hallux valgus.

Other objective evidence routinely used in the evaluation of cerebral palsy and specifically the disorders of movement and gait is gait analysis often with dynamic EMG. Results from gait studies can guide surgical treatment in patients with CP.

The spine and hip pathology seen in CP patients can be seen in other neuromuscular disorders. However, proper history and physical exam can often distinguish between the various diagnoses.

A condition called familial spastic paraparesis may also look very similar to CP phenotypically. In this condition, affected patients display similar weakness and spasticity, especially in the lower extremities. This condition, however, is a genetic disorder – family history is important to distinguish this from CP.

Seizure activity can be seen in patients with CP. This may lead to further brain damage if left untreated. Choking and trouble swallowing may be present in those patients with CP who also have bulbar involvement. This may require G-tube placement for nutrition if unable to protect airway

The treatment of patients with CP is often complex and multi-disciplinary. Musculoskeletal providers treating CP patients often follow them from infancy through adulthood. Apart from assisting with the coordination of care to other providers, the musculoskeletal needs change throughout the life of the child living with CP.

The skills and services of physical therapists, occupational therapists, and orthotists are central to the treatment of children with CP. Physical therapy (PT) serves to help train and maintain mobility, which often relies on the use of aids such as crutches or walkers. PT programs focusing on stretching and specific muscle strengthening to help with ambulation and mobility are important, as are the use of various braces and orthoses to help prevent joint contractures and maintain appropriate joint alignment for ambulation. The treating orthopedist should also check at each visit to ensure that orthoses are still fitting appropriately, as children may grow out of their orthoses, or sometimes due to worsening deformity.

Medical treatment of the neuromusculoskeletal manifestations of CP is widely used. Common medications prescribed to combat spasticity include baclofen and diazepam. Baclofen may be taken orally or administered intrathecally with an implantable pump to non-ambulatory patients. Diazepam is taken orally. Both these medications can serve to provide for muscle relaxation, but also may lead to profound sedation in these patients. A neurologist skilled in the treatment of CP should follow these patients closely to help and strike the right balance between muscle relaxation and sedation.

Botulinum toxin A (“Botox”) may also be given to treat spastic CP patients. This medication is injected at the neuromuscular junction, and acts as an irreversible inhibitor to proteins at the axon terminal responsible for the release of acetylcholine, thereby disrupting the neuromuscular signal chain and preventing muscle fiber depolarization. Even though the toxin acts in an irreversible manner, after 3-6 months the clinical effect wears off due to protein turnover in the cell and new, uninhibited protein targets replace the inhibited ones. Patients treated with botulinum toxin A are then usually prescribed a physical therapy and bracing regimen. It is important to note that this therapy is only intended for spasticity; it is ineffective against fixed joint contracture. 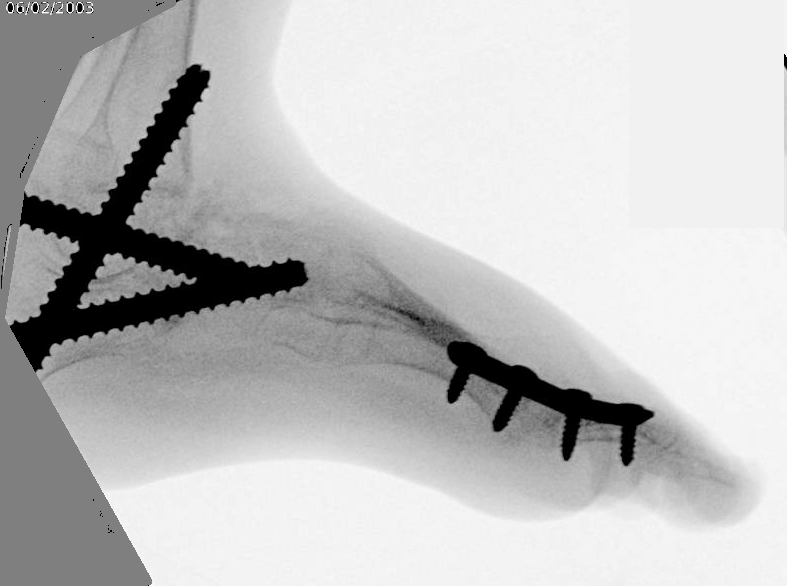 Hip subluxation may be treated with adductor tenotomies in mild cases in younger patients. In severe cases, or when the children are older or with frank dislocation, femoral and/or pelvic osteotomies are often necessary in addition to adductor release. A common option for the femoral osteotomy is a varus de-rotation osteotomy of the proximal femur (Figure 6). Options for pelvic osteotomies include Dega osteotomy (if the triradiate cartilage is still open) or a Ganz versus shelf osteotomy (if the triradiate cartilage is closed). 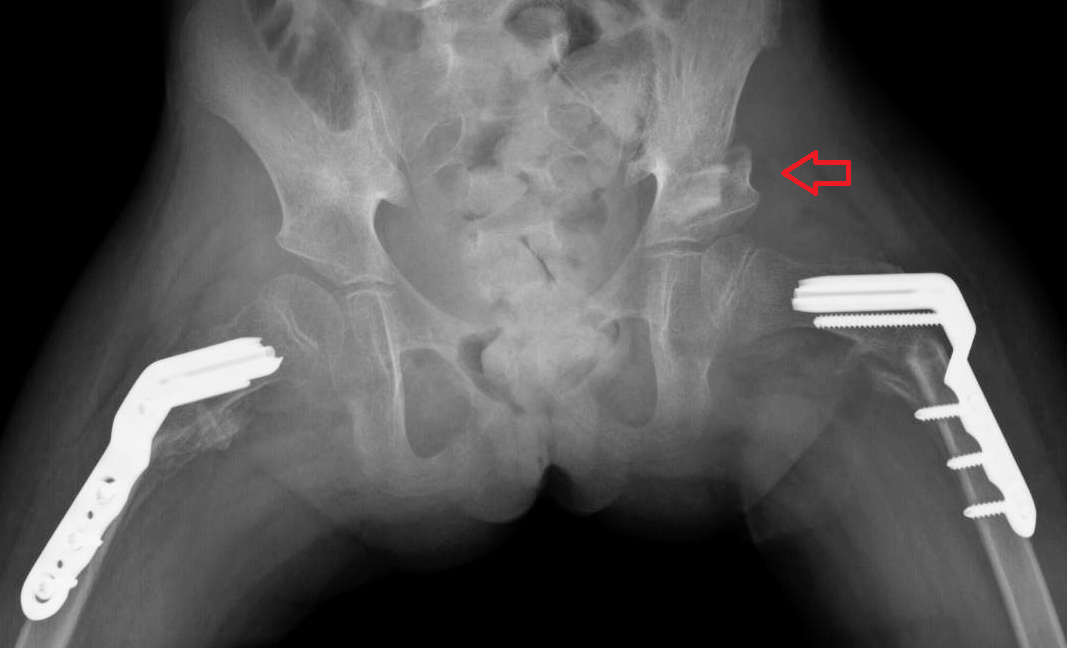 Figure 6: Post-operative anteroposterior radiographic views of the patient shown in Figure 3. The bilateral hip dislocation was relocated with bilateral femoral varus denotational osteotomies of the femurs, as well as a Dega acetabular osteotomy on the left (red arrow).

Scoliosis is often progressive and may be treated with posterior spinal fusion. Fusion to the pelvis is recommended if pelvic obliquity is present, especially in non-ambulators to improve wheelchair balance (Figure 7). Very stiff curves and large curves may require anterior release as well. 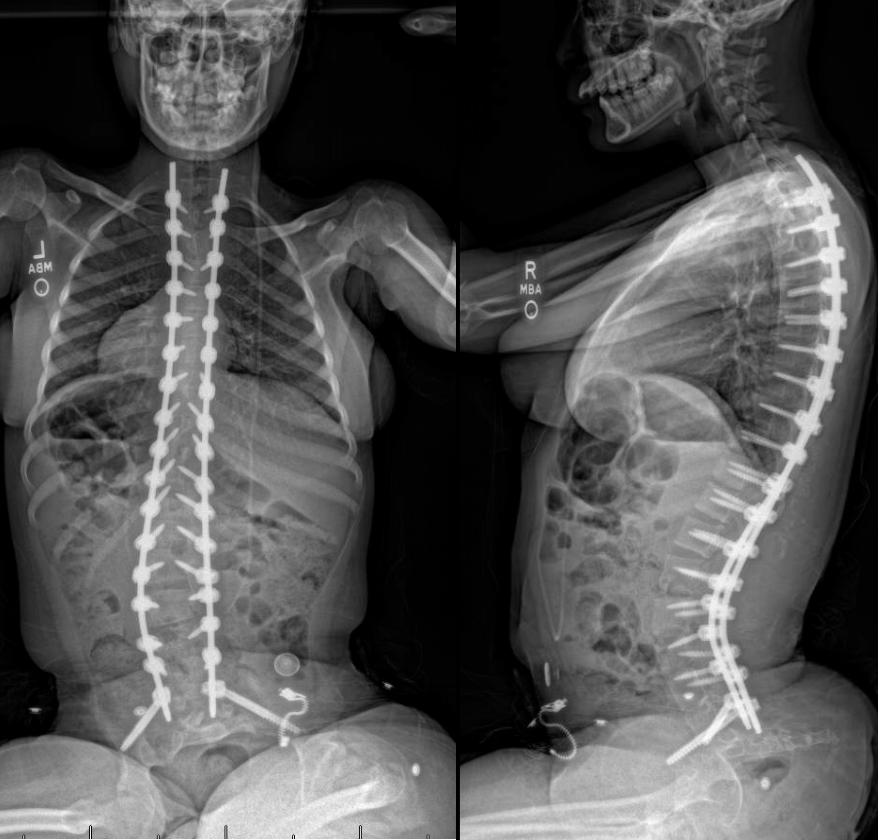 Figure 7: Radiographs of the patient shown in Figure 2, after posterior spinal fusion from T2 to the pelvis.

Life expectancy in CP is inversely correlated with the severity of disease. Patients with mild CP may have a normal life expectancy. By contrast, as many as 10% of severely affected patients will die in childhood. Respiratory failure is the most common cause of mortality in CP patients.

Outcomes following surgery are generally worse than outcomes for similar surgeries in unaffected patients; for example, with spinal fusion surgery the infection rate is much higher in CP than for idiopathic scoliosis patients.

Many known risk factors exist for CP (Table 3). Many of these environmental risk factors can be mitigated before & during pregnancy. However, controlling for these risk factors does not completely reduce the chances of being born with CP to zero.

Adequate nutrition is paramount to the successful treatment of patients with CP. Patients with bulbar involvement that lack adequate swallowing coordination or function, G-tube placement is necessary to provide nutrition.