Back pain is a common, self-limited condition in many people, often without an identified cause. Cauda equina syndrome, discitis and cancer are also causes of back pain which are not so innocent and self-limiting. Describe these conditions and suggest some questions a physician might ask to help detect the diagnoses?

Back pain is a common, self-limited condition in many people, often without an identified cause. Cauda equina syndrome, discitis, and cancer are also causes of back pain which are not so innocent and are not typically self-limiting. Describe these conditions and suggest some questions a physician might ask to help determine the diagnosis?

The cauda equina consists of the nerve roots and rootlets that branch off of the lower end of the spinal cord, also known as the conus medullaris. The cauda equina includes the nerve roots from lumbar and sacral regions. These nerves, although branched off the spinal cord itself at roughly the L1 vertebral level, remain within the central canal until they exit at their appropriate neural foramen.

The nerves branching off beneath the termination of the spinal cord are said to resemble a horse's tail, hence the name cauda equina (Figure 1). 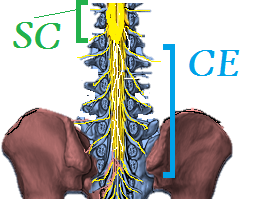 Figure 1: the cauda equina. The neural elements are shown in yellow. The region of the spinal cord (SC), ending usually at L1-L2, is identified by the green brackets, and that of the cauda equina (CE) in blue.

Cauda equina syndrome occurs when the nerves of the cauda equina are compressed by a space-occupying lesion. The most common such lesions are a large herniated disc, tumor, epidural abscess, or bony protrusion.

The compression of multiple nerves in the cauda equina often leads to unilateral or bilateral lower extremity pain and sensorimotor changes, bowel/bladder dysfunction, which can manifest as incontinence or urinary retention (with overflow incontinence and increased post-void residuals).

Patients may also present with sexual dysfunction, saddle anesthesia, and absence of lower extremity reflexes. Back pain is often the symptom that brings patients in for evaluation. Among patients presenting with symptoms of back pain and urinary disturbances, cauda equina syndrome should be on the differential. 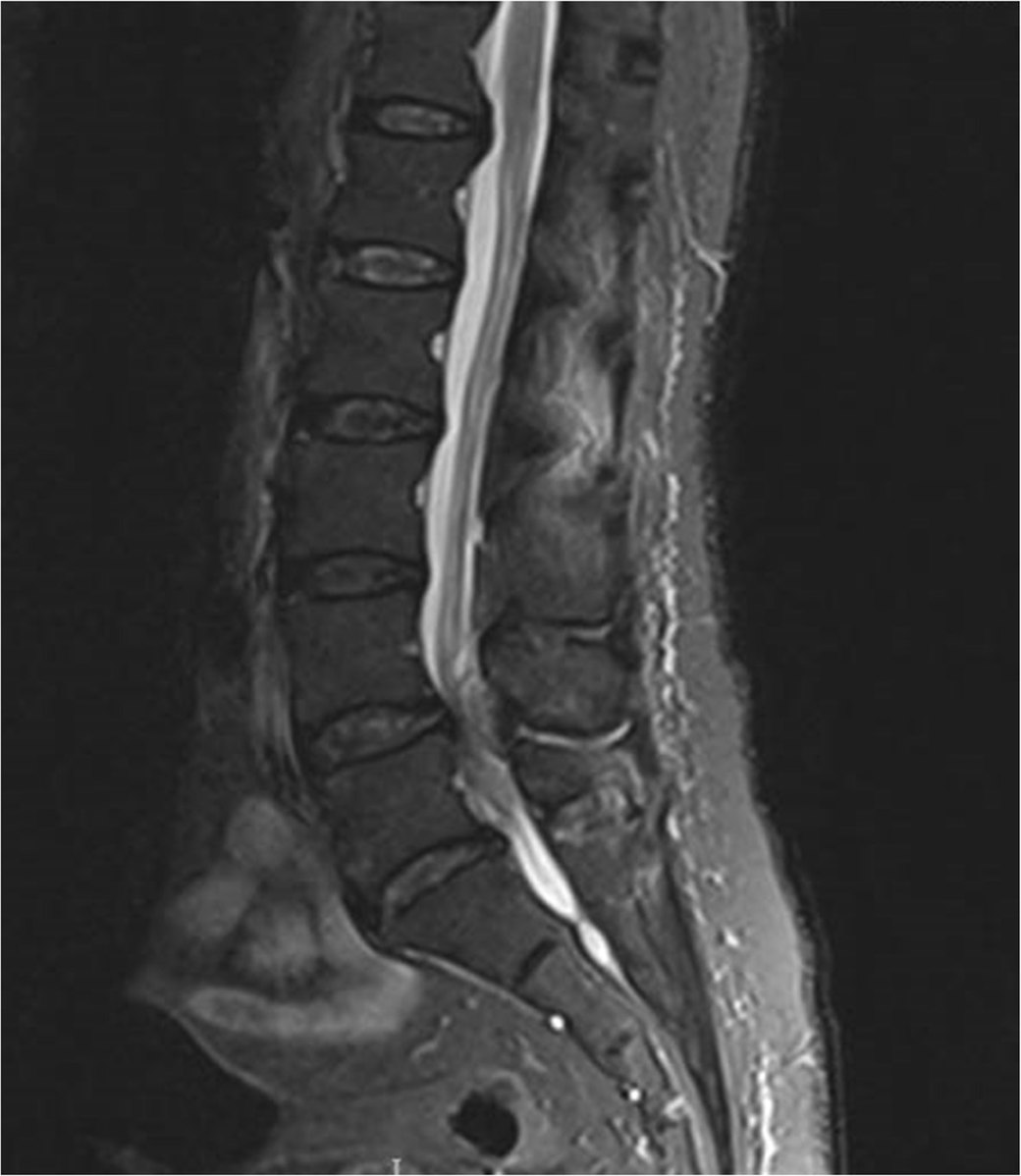 Discitis is an infection in the intervertebral disc space.

Bacteria can reach the spine by one of these three routes:

Staphylococcus aureus accounts for more than half of the cases of discitis in the United States.

Discitis is often seen in people who inject street drugs and those who are immunocompromised.

Symptoms from discitis include severe back pain that is exacerbated by physical activity and is often reproduced on palpation of the spinous process. This pain can often lead to difficulty with movement or complete immobility. Fevers and chills may be present in some patients but is not necessary for a diagnosis of discitis.

The diagnosis of discitis is typically confirmed by MRI (Figure 3). Treatment always includes antibiotics tailored to the underlying infectious agent. Sometimes, the use of a back brace can help with symptoms by restricting motion. A biopsy of the affected tissue with microbiology cultures can inform the appropriate antibiotic regimen needed for treatment. Surgical debridement in the affected area may be indicated if antibiotic treatment is ineffective and further source control is necessary. 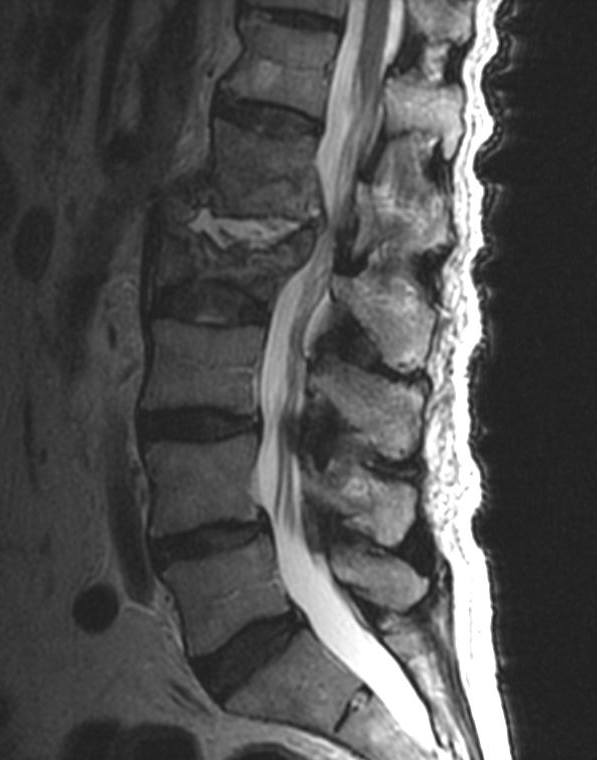 Common Malignancies Found in the Spine

Primary malignancies of the spine are rare. A tumor in the spine is most likely to be a metastasis from cancer elsewhere in the body. The spine is the third most common site for cancer metastases after the lung and the liver.

The most common primary cancers that spread to the spine are breast, lung, thyroid, kidney, and prostate cancer. A helpful mnemonic to remember which cancers are the most common to metatasize to bone is “a BLT with a Kosher Pickle (Breast, Lung, Thyroid, Kidney, and Prostate).”

Concern for spinal metastases should be raised in individuals that have a history of cancer or risk factors (e.g. an extensive smoking history) even though a primary cancer diagnosis may not be known. A spinal metastasis may be the initial presenting sign.

Patients typically present with generalized back pain. Unlike the pain from degenerative conditions or a sprain/strain injury, the pain from a tumor is often worse at night. Weight loss, chills, and night sweats are other associated findings. Other findings may include malignant hypercalcemia, which can be a medical emergency. Symptoms include confusion, muscle weakness, dehydration, and excessive thirst and urination.

Detection of malignancy in the spine warrants prompt workup to identify the primary source, given the rarity of primary tumors of the spine. MRIs, CT scans, and bone scans (Figure 4) are often utilized to discover primary tumor sites and the overall burden of metastatic bone disease, respectively. 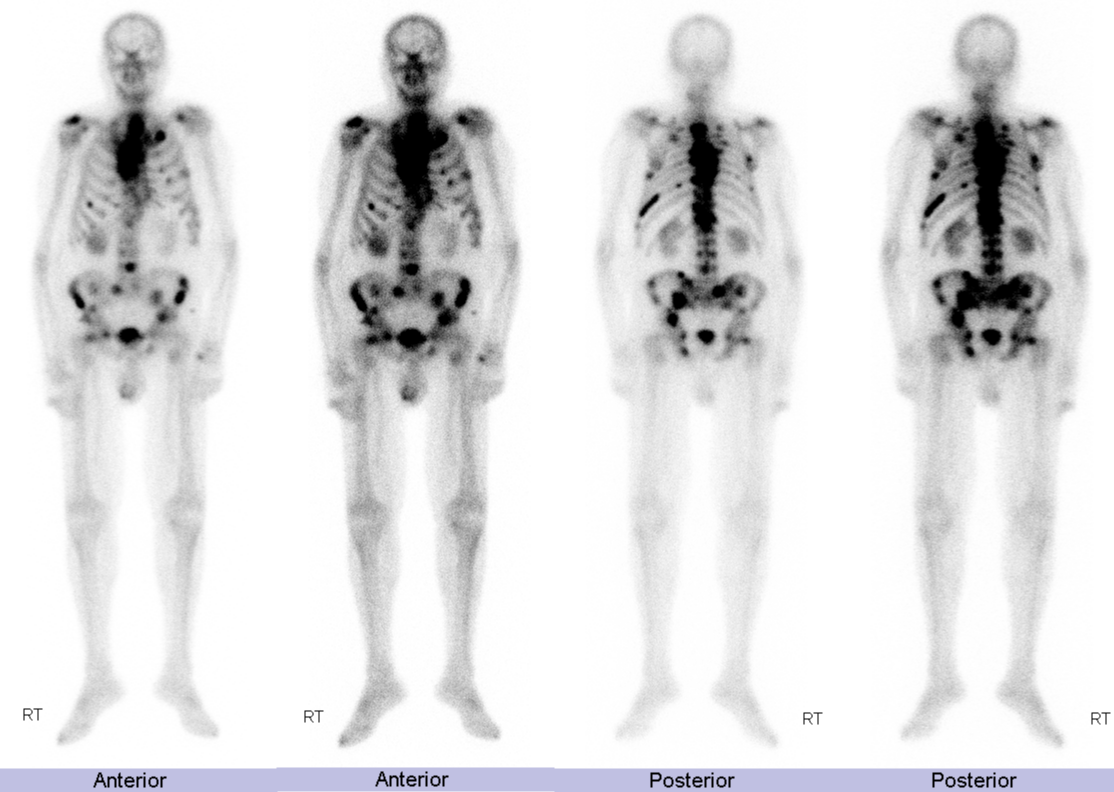 There are likely many questions an experienced physician might ask to help identify worrisome causes of back pain.  In general, one asks about the character of the patient’s presenting symptoms, the timing of symptoms, inciting and relieving factors, and the presence of “red flag” symptoms, such as unintended weight loss, fevers, night sweats, pain at night, and weakness.

For students, other good questions to recall include the following: