The eight carpal bones of the wrist (“carpus”) are held together by ligaments. When there is an injury to a ligament (ranging from an isolated sprain to a catastrophic dislocation) the wrist may be rendered unstable.

Carpal ligament injuries can lead to post-traumatic arthritis because the bones of the carpus are normally “intercalated,” that is, tightly tethered to each other. When a carpal ligament is injured, the bones may not move in their normal concerted fashion. This abnormal motion leads to abnormal positioning of the bones and, in turn, overloading of the joint surfaces.

There are eight carpal bones arranged in two rows: the proximal row consists of scaphoid, lunate, triquetrum and pisiform (Figure 1). The distal row consists of trapezium, trapezoid, capitate and hamate. (Please see the chapter, Carpal Fractures, for a more detailed description.) The proximal row articulates with the distal radius and distal row connects to the metacarpal bones of the hand. 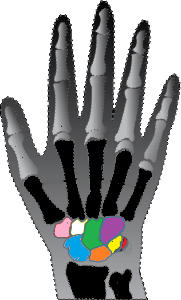 Figure 1: The carpal bones. The scaphoid is shown in blue; the lunate in orange; trapezium in pink; trapezoid in white; the capitate is green; the hamate is purple; the triquetrum is yellow and the pisiform is red.
The bones have complex geometry to allow them to remain in contact when the hand is moved in three dimensions. Yet this complex geometry offers little bony congruity and in turn less inherent stability of the joints (contrasted to what is seen, for example, in the hip). As such, a network of ligaments is needed to secure the bone-to-bone connections.

The ligaments of the carpus are categorized as “intrinsic” (for those connecting carpal bone to carpal bone) or “extrinsic” (if they connect either the radius or the ulna to an individual carpal bone). The nomenclature is simple: a compound word naming the two connecting bones is used, e.g., "scapho-lunate" ligament.

When a carpal ligament is injured, the bones will tend to separate and the normal contact points are disrupted. This can lead to focal load bearing and articular cartilage breakdown. In turn, arthritis may develop, leading to painful and limited motion and radiographic changes.

The carpal bones are said to be “intercalated.” That term technically means “layered,” but the key concept is that the bones are linked to each other via ligaments, and as such, when a ligament is injured the bones do not move in concert, as they should. Two patterns of disruption are common enough to warrant their own name:

(The names refer to the abnormal position assumed by the carpal bones because they are not tethered appropriately.)

A third pattern of ligamentous injury, perilunate dislocation, is one of the most severe forms of carpal instability. This is seen when multiple intrinsic and extrinsic ligaments are torn, and the lunate completely dissociates from rest of the carpal bones. Because of the high energy associated with this injury, vascularity and neurologic function may be compromised as well.

The most common injury mechanism is from a fall on an outstretched hand with wrist extended. Violent trauma such as a motorcycle accident or a contact sports injury is also a frequent cause of carpal instability. Accordingly, the chief complaint of patients with a carpal ligament injury is pain, and their primary findings are swelling and tenderness.

In severe cases of carpal instability, the lunate can be completely displaced  (Figure 2) and therefore might be palpable in the palm.

Often, the patient’s pain and tenderness will to be too great to allow stress testing of the affected structures and therefore radiographic diagnosis is key.

In many cases, carpal ligament injuries are associated with fractures of the adjacent bones. For instance, distal radius fractures are commonly seen with scapholunate ligament injury. Therefore, it is important to survey the entire overall spacial relationship of the carpal bones, in addition to assessing the more obvious fracture(s).

Unfortunately, there are no pathognomonic clinical features that are diagnostic of carpal instability. The symptoms are often subtle and unimpressive. Generalized pain especially with wrist motion and axial compression without any obvious deformity or radiographic findings can steer the clinicians to suspect carpal instability.

Astute examiners can localize tender spots over the scapholunate and lunotriquetral ligaments based on anatomic landmarks.

Provocative maneuvers such as the Watson test and scaphoid ballottement test are helpful. The Watson test (also known as the scaphoid shift test) is perhaps the most important exam maneuver when there is suspicion for carpal instability. The Watson test is used to identify scapholunate ligament tears.

In order to perform this test, the clinician’s thumb presses on the scaphoid tuberosity. As the examiner passively deviates the wrist from ulnar to radial direction, pain and clunking signifies a positive test. This "clunk" results from subluxation of the proximal scaphoid over the dorsal lip of the radius. Although the Watson test is sensitive for the detection of scapholunate ligament tears, its specificity is low. 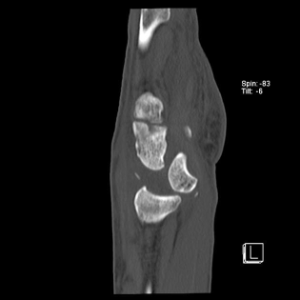 Figure 2: In this lateral view of a CT of the wrist, a volar dislocation of the lunate is demonstrated. (credit: Radiopaedia. http://bit.ly/1nwVadv)

After a thorough history and physical examination, posteroanterior, oblique and lateral radiographs of the wrist (the so-called "three-views") should be obtained.

Full thickness tears or chronic injuries to the scapholunate and lunotriquetral ligaments are often detected due to widened intervals of the proximal carpal bones.

Carpal instability can be demonstrated on imaging studies, either by detecting the carpal bones out of their normal place (Figures 3 and 4), suggesting laxity, or by demonstrating arthritic damage to the articular surfaces.

When assessing for carpal instability, the bone worthy of particular attention on imaging studies is the lunate. The lunate is tethered to scaphoid and triquetrum.

The key point to recall is that if the carpal bones were not connected, the scaphoid would flex (move in a volar direction) and the triquetrum would extend (move in a dorsal direction). The lunate, connected to both the scaphoid and the triquetrum, stabilizes these bones accordingly. Critically, the position of the lunate can therefore indicate the status of the ligaments:

With a complete tear of the scapholunate ligament (Figure 5), abnormal extension of the lunate is visible on the lateral view of the wrist. This, as noted above, is known as dorsal intercalated segment instability or DISI.

A complete tear of the lunotriquetral ligament will allow the scaphoid to drag the lunate into flexion, indicating volar intercalated segment instability (VISI)

Partial tears of the scapholunate and lunotriquetral ligaments are more challenging to identify on static radiographs, which tend to appear normal.

In cases where multiple views including stress radiographs do not show any abnormality, MRI may prove to be helpful. However, the sensitivity of MRI for scapholunate ligament tear is only approximately 60-70%.

The current gold standard for diagnosing carpal instability is wrist arthroscopy. The direct visualization of the carpal ligaments with the use of a camera and blunt probing instruments, can definitively diagnose or rule out subtle or radiographically negative ligament tears.

Figure 4: The scapholunate interval is wide. (modified from wikiradiography) 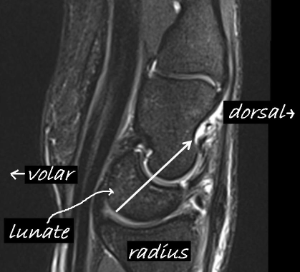 Figure 5: Lateral view of the wrist on MRI, showing the lunate extended, i.e. tilted towards the dorsal surface. (Some have suggested that this looks like a tea cup that has been tipped over.) This "tilted tea cup" is indicative of complete disruption of the scapholunate ligament.

Instability can be subtle: severe symptoms can be found in the setting of fairly benign-appearing radiographs. It has been shown that carpal instability can be detected (if sought) in approximately 30% of patients with displaced intra-articular distal radius or scaphoid fractures.

Major carpal instabilities and frank dislocations are readily visualized on radiographs. Clinical findings of partial tears or attenuation of scapholunate and lunotriquetral ligaments are subtle and symptoms are nonspecific. More common clinical entities should be entertained prior to diagnosing carpal instability.

Conditions that may present with complaints similar to those of mild carpal instability include:

Partial tears of scapholunate and lunotriquetral ligaments without positive radiographic findings are initially treated nonoperatively with a short course of immobilization, followed by therapy. In persistently symptomatic cases, wrist arthroscopy is the next phase of treatment. Partial tears can be confirmed, and the ligament remnant may be debrided. Arthroscopically-assisted and percutaneous pinning of the injured interval can provide further stabilization to promote healing.

Complete tears of scapholunate and lunotriquetral ligaments (and with that, loss of ligament integrity) allow the carpal intervals to widen. The goal of treatment for this condition is to restore and maintain carpal alignment. Many operative techniques have been described; no single technique has proved superior to the others. An open approach (contrasted to arthroscopy) allows for better visualization of the wrist bones at the cost of more surgical trauma.

Regardless of the operative approach, screws and pins are ultimately used to hold the proximal carpal in an anatomic position as seen in Figure 6.

Primary repair is feasible in certain cases, but more frequently wrist capsule and other ligaments are “borrowed” to augment the injured interval. 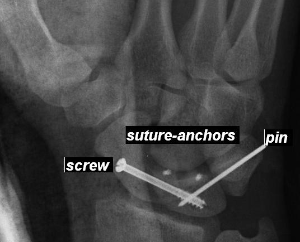 Figure 6: Fixation can be attained with screws, pins or suture anchors- or all three!

In cases of perilunate dislocation, closed reduction with sedation can be attempted in the emergency department, but it is often unsuccessful as a long-term solution. These injuries are treated surgically with nerve decompression (i.e. carpal tunnel release) and open reduction of the lunate.

High level medical evidence (ie prospective trials) regarding treatment outcome does not exist, and case reports may be misleading because of bias. Still, in general it can be observed that an injury severe enough to be easily detected is severe enough to lead to a less than desirable outcome, regardless of how it was treated. Similarly, mild ligament injuries treated with the immobilization often do well though some loss of motion may be expected. In severe or chronic cases, post-traumatic arthritis is expected.

Identify the surface anatomy distal edge of radius, scaphoid, lunate and triquetrum on an uninjured wrist. Perform a Watson test during clinical exam. Name and identify the proximal carpal bones, and recognize, if present, any widened intervals between them on AP radiographs and any lunate (“tea cup”) tilt on lateral radiograph.