Carpal Tunnel Syndrome is a compression neuropathy of the median nerve as it passes though the carpal tunnel at the wrist. Patients with Carpal Tunnel Syndrome typically present with numbness and tingling in the thumb, index finger and long fingers, as well as nocturnal wrist or hand pain. Prolonged compression of the median nerve (Figure 1) may also lead to thenar muscle weakness and fine motor difficulty. Carpal Tunnel Syndrome is common and costly: its economic costs in the USA alone are estimated to exceed $2 billion per year, where approximately 500,000 carpal tunnel releases are performed per year. 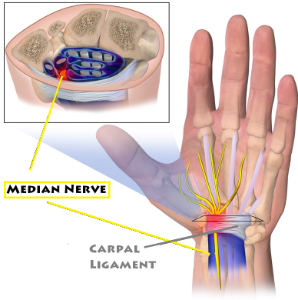 Figure 1: Carpal Tunnel Anatomy: the median nerve accompanies the flexor tendons as they pass though the carpal tunnel at the wrist. (Credit Wikipedia. http://bit.ly/1Q7JcxZ)

The median nerve originates from the lateral and medial cords of the brachial plexus with contributions from the C6, C7, C8, T1, and sometimes C5 nerve roots.

The anterior interosseous nerve branches off the median nerve and innervates the flexor digitorum profundus muscle to the index and long fingers, flexor pollicis longus, and pronator quadratus.

The palmar cutaneous sensory branch of the median nerve originates proximal to the carpal tunnel and provides sensation to the thenar eminence.

The recurrent motor branch of the median nerve, which innervates the lumbricals to the index and long fingers and the opponens pollicis, abductor pollicis brevis, and flexor pollicis brevis muscles, originates as the median nerve exits the carpal tunnel. However anatomic variants exist, and the nerve may branch more proximally within the tunnel or may course through the transverse carpal ligament as it travels toward the thenar musculature.

The median nerve supplies sensory innervation to the palmar aspect of the thumb, index finger, long finger, and the radial one-half of the ring finger as well as the radial aspect of the palm.

Acute Carpal Tunnel Syndrome is the result of sudden, sustained compression of the median nerve secondary to local trauma, fracture, or hematoma.

Carpal Tunnel Syndrome more commonly occurs as the result of chronic compression of the median nerve. Most patients present with no identifiable cause and are considered idiopathic cases. Histologic evaluation reveals proliferation of edematous and fibrous tissue within the carpal tunnel.

Multiple systemic illnesses are associated with the presence of Carpal Tunnel Syndrome. The most common of these include obesity, diabetes mellitus, and hypothyroidism.

Rheumatoid arthritis may cause chronic compression of the median nerve at the wrist as a result of local pannus formation (synovial proliferation).

Carpal tunnel syndrome has not been shown to be caused by office work such as typing or using a computer mouse. The NIH website stated explicitly, "There is little clinical data to prove whether repetitive and forceful movements of the hand and wrist during work or leisure activities can cause carpal tunnel syndrome.”  Nonetheless, it is of course possible that patients with carpal tunnel syndrome may experience symptoms of their disease when engaged in such activities. (By analogy, a patient with coronary artery disease may experience angina when running up the stairs. But just as stair climbing does not cause coronary artery disease, typing does not cause Carpal Tunnel Syndrome. Rather, both activities may simply provoke symptoms.)

Carpal Tunnel Syndrome presents clinically as numbness, tingling, and paresthesias of the thumb and radial digits.

Patients may also experience distal forearm, wrist or hand pain. Pain at night is a common complaint, and many patients report relief with “shaking out” their hands.

In addition to sensory disturbances, chronic median nerve compression may lead to hand weakness, loss of dexterity and fatigability as a result of decreased motor nerve conduction and muscle atrophy.

A thorough upper extremity evaluation including strength and neurologic testing may reveal any of the following:

Tinel’s test is performed by percussing the course of the median nerve as it crosses the carpal tunnel into the palm. A positive test elicits shock-like sensations in one or more of the radial digits.

Phalen’s test involves having the patient flex the wrist for a period of 60 seconds to see if that provokes numbness and tingling in the median nerve distribution.

The examiner performs Durkan’s compression test by applying direct pressure to the wrist in the region of the median nerve at the carpal tunnel for 30 seconds. Like Phalen’s test, Durkan’s test is considered positive if numbness and tingling in the median nerve distribution is elicited.

Baseline wrist radiographs should be obtained to rule out fracture, bone spurs, dislocation, or other anatomic sources of median nerve compression. Radiographs, however, are generally of low yield. MRI or ultrasound have been described as adjuncts in the evaluation of tumors or cysts suspected of causing Carpal Tunnel Syndrome, however, these are not commonly performed, and more sensitive and specific tests exist to confirm the diagnosis.

While specific blood tests may be useful in diagnosing systemic conditions predisposed to developing Carpal Tunnel Syndrome, such as hypothyroidism or diabetes mellitus, there are no known serologic studies or markers for compression neuropathies.

When a nerve is compressed the velocity with which impulses are conducted will be decreased. Hence, the finding of decreased median nerve conduction velocity as the nerve passes in the carpal tunnel (with normal velocity elsewhere) can be considered as objective evidence of compression. Some patients, however, have Carpal Tunnel Syndrome despite borderline normal nerve conduction testing. (Pre-operative nerve conduction testing is particularly useful in case there is recurrence or failure to improve with treatment.)

Sensory testing is based on the reports of patients’ subjective responses and therefore should not be considered objective evidence.

Carpal Tunnel Syndrome is a compression neuropathy of the median nerve at the wrist, and therefore, by definition, affects only structures in the median nerve distribution distal to the wrist (with referred pain in the forearm, occasionally).

Patients with cervical radiculopathy may present with complaints suggestive of Carpal Tunnel Syndrome.

Local pathology within the hand (arthritis, tendinitis), too, may mimic some of the symptoms associated with Carpal Tunnel Syndrome.

Treatment for Carpal Tunnel Syndrome should begin with non-operative treatment. The most commonly prescribed conservative intervention is wrist splint immobilization (especially for night-time symptoms); such splinting minimizes pressure in the canal.

Non-steroidal anti-inflammatory medications may provide symptomatic relief, however the benefit has not been clearly demonstrated in the literature.

For patients with potential occupational risk factors, ergonomic considerations such as workspace modifications may provide some relief; such an approach is justified empirically.

Corticosteroid injection into the carpal tunnel serves not only a therapeutic role but also aids in confirming the diagnosis of Carpal Tunnel Syndrome: symptomatic relief after injection helps confirm the diagnosis. Approximately 1 in 5 individuals remain symptom free at 1 year following injection. Patients with mild disease and those with symptoms for less than 1 year are more likely to experience longer-term relief.

Surgical decompression of the median nerve at the carpal tunnel involves release of the transverse carpal ligament. A number of surgical techniques (including open (Figure 2), mini-open, and endoscopic) have been described. In each, care is taken to avoid injury to the recurrent motor branch. 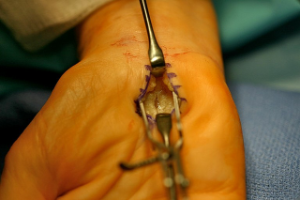 Surgical decompression is the most reliable intervention available to treat Carpal Tunnel Syndrome. Recurrence following surgical release ranges from 5% to 20%. Sensory and motor recovery is variable and difficult to predict, however, the pain associated with chronic nerve compression typically resolves. Nerves that have been chronically compressed and thus subjected to longer durations of epineural ischemia are less likely to demonstrate full recovery. This highlights the importance of early diagnosis and therapeutic intervention when Carpal Tunnel Syndrome is present.

A systematic review of conservative treatment of carpal tunnel syndrome (PMID: 17613571) found that vitamin B6 and exercise therapy are ineffective. There is limited or conflicting evidence whether yoga, laser and ultrasound are effective treatments.

A positive Tinel’s test has been referred to as “Tinel’s sign,” however this is a misnomer: the perceived and reported response is a subjective symptom, not an objective sign. It has been proposed that specific subjective responses to focused tests be labeled as “wigns,” spelled like “sign” but pronounced “whine,” to emphasize the blending of the subjective and objective realms.