Biomechanics of the Foot and Ankle

The Constituent Stages of the Stance Phases of Walking

How the Muscles Work During Walking

A basic understanding of the biomechanics of the foot is essential to diagnose and treat foot and ankle problems. Most foot and ankle problems have a chronic component to them. A rope that is repetitively pulled on will tend to fray over time. Similarly, tendons that get repetitively loaded are at risk for developing tendonitis. Joints that are excessively loaded in an eccentric manner can develop localized cartilage breakdown. This is analogous to a car tire that wears unevenly on one side if it is put on with uneven alignment. A paper clip that is wiggled back and forth over and over again will eventually break and this is analogous to how stress fractures occur. Similarly, ligaments that are repetitively stretched may become loose leading to joint instability. As repetitive forces absorbed by the foot predispose to these conditions understanding the amount and type of force that a foot is subject to, and how these forces vary based on foot-type, weight, and activities is important.

In technical terms, a force is that which causes mass to accelerate. At a more intuitive level, a force is either a push (compression), a pull (tension) or a twist (torsion). In the foot and ankle, compression is typically applied to bones and joint surfaces and tension applied to ligaments and tendons. Both bones and soft tissues are subject to torsional forces. (In orthopaedics, there is another main category of force, namely shear, in which there is a deformation as parallel internal surfaces slide past one another, which may happen to the cartilage surface. Shear is less commonly encountered in the foot.)

Pathological forces in the foot can be ground reactive forces – that is, the force that the ground exerts on the foot during activity  – or forces related to muscle imbalance. Each muscle tends to have an antagonist: a muscle that pulls in the opposite direction. For example, the antagonists of the posterior calf muscles that plantarflex the foot are the anterior compartment muscles which dorsiflex it. An imbalance between them from, say, a relative weakness in the anterior compartment muscles, will produce an equinus contracture: namely, the foot will be in a “pulled down” position. Similarly, claw toes are another example of a deformity that develops due to relative muscle imbalance - an imbalance between stronger extrinsic muscle and weaker intrinsic muscles pull the inter-phalangeal joints into a deformed position.

Foot shape also effects how a foot is loaded. In a perfectly neutral foot, forces tend to be distributed evenly. When the foot shape is not neutral, there may be an overload of forces in specific areas. A flatfoot, for example, will tend to have traction forces loading the structures on the medial aspect of the ankle, with compression forces being increased over the lateral aspect to the ankle and hindfoot (Figure 1). A high arched foot (subtle cavus) has the opposite loading pattern: traction forces on the lateral aspect of the ankle and compression forces on the medial ankle. As a result there are a variety of chronic and acute-on-chronic (for example, stress fractures) clinical problems that are caused by the patient’s foot shape and subsequent loading pattern. 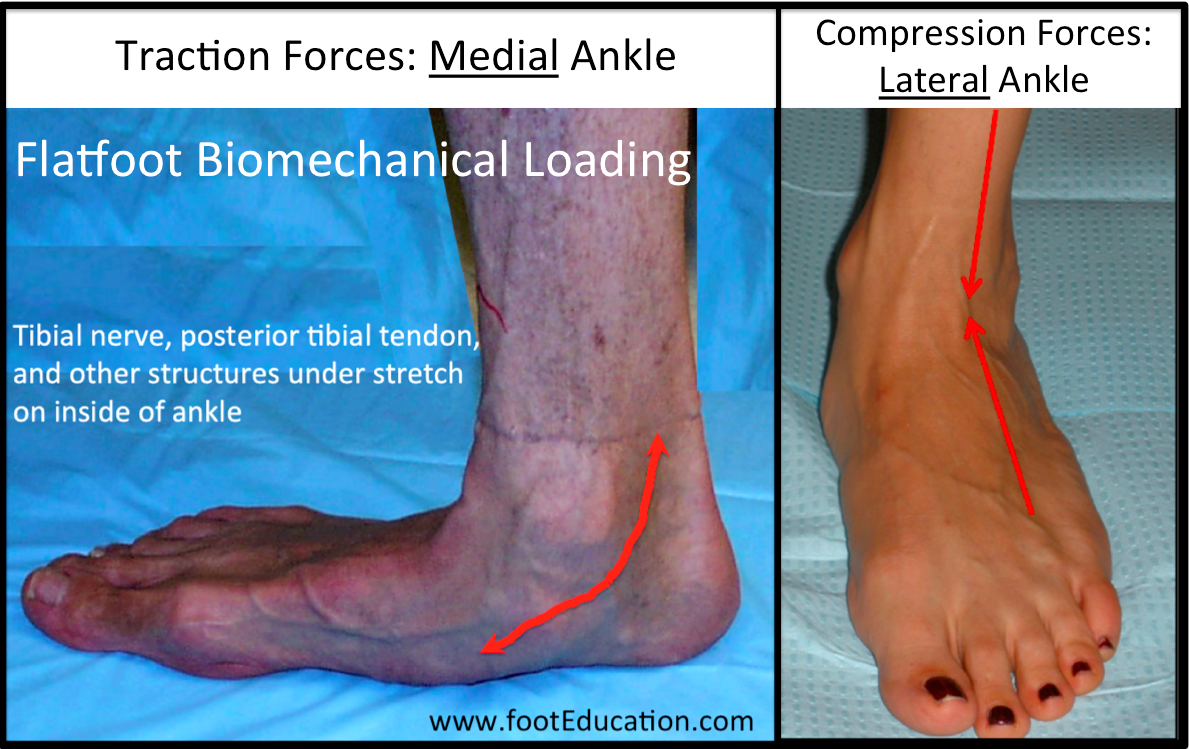 A detailed gait analysis requires sophisticated machinery: high-speed video and force-recording plates on the ground to collect data, and a robust computer program to analyze it. Still, understanding the core elements of gait can improve diagnostic accuracy and treatment recommendations.

There are three areas to focus on when learning about gait:

The Five Primary Goals of Walking

The Phases of Walking

Gait can be divided broadly into a Stance phase and Swing phase (Figure 2).

Stance phase is the time when the foot is on the ground.  It comprises about 60% of the walking cycle. For a brief part of the stance phase, both feet will be on the ground simultaneously

Swing Phase occurs when one foot is on the ground and one in the air. The foot that is in the air is said to be in the swing phase of gait.

Heel Strike: The heel strike phase starts the moment when the heel first touches the ground and lasts until the whole foot is on the ground (early flatfoot stage).

Heel Rise: As the name suggests, the heel rise phase begins when the heel begins to leave the ground. Because the foot creates a lever arm when the body’s center of gravity is anterior to the point of contact with the ground, the force applied to the foot is at least double body weight. Considering that the average human takes at least 3000 steps per day (an active person commonly takes 10,000 or more steps/day), the foot can easily develop chronic repetitive stress-related foot problems even with normal anatomy.

Toe Off: The toe off stage of gait begins as the toes leave the ground. This represents the start of the swing phase. 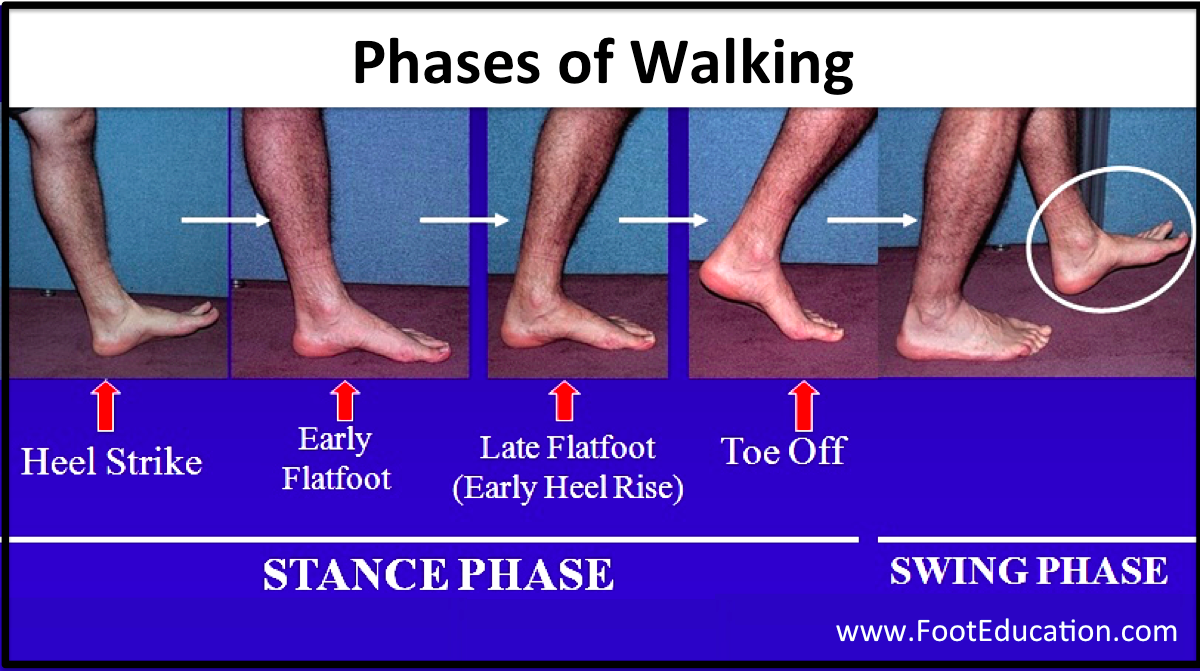 Figure 2: Phases of Walking. The phases of late flatfoot and heel rise are depicted in one image in this schematic. The heel rise phase commences the instance the heel leaves the ground.

Walking and running are obviously different in terms of speed, but the formal distinction is that is that during running there is a third phase of gait: the so-called float phase. During the float phase, both feet are off the ground. Also, implicitly, because greater speeds require greater energy, the forces applied to the running foot are also greater. Typically, the forces may be four or five times greater than body weight during running and six or seven times greater during sprinting.

With 28 bones in the foot and ankle, there are obviously many distinct points of contact between bones, and technically each of these articulations can be deemed a joint of its own. Nonetheless, it may be reasonable to simplify this and consider only the tibiotalar joint (the “ankle joint” in layman’s terms) and the transverse tarsal joint (the combination of the talonavicular and the calcaneocuboid joint).

Ankle (tibiotalar joint) Joint: The tibiotalar joint allows the foot to move up (dorsiflexion) and down (plantarflexion). It is powered by the muscles located in the front of the leg (the anterior muscle compartment) for upward movement, and the muscles located in the back of the leg (the posterior compartment) to pull the foot back down. The main articulating surfaces of this joint are the distal tibia [plafond] and the superior surface of the talus (though of course the lateral wall of the mortise [socket] in which the talus sits is made by the fibula). The hindfoot also contains a subtalar joint, in which the talus articulates with the calcaneus, allowing for a tilt like [inversion and eversion].

Transverse Tarsal Joint: This joint-complex is composed of the talonavicular joint and calcaneal cuboid joint. The transverse tarsal joint is flexible/mobile during the early flatfoot stage, and becomes rigid in the late flatfoot and heel rise phases of the walking cycle. The relative rigidity of this joint corresponds to the two tasks of the foot: the transverse tarsal joint is unlocked when the foot is absorbing shock (early flatfoot) and is locked when the foot becomes a lever (late flatfoot and heel rise). The key to this change is the posterior tibial tendon. This tendon attaches on the navicular, and by pulling on that bone is able to move the axes of the talonavicular and calcaneal cuboid joint, such that the joints are no longer parallel. When these axes are not parallel, the joint locks. This way, when the heel rises off the ground, the calf can channel force into the ground to propel the body forward.

It is important to realize that classic description of locking and unlocking the transverse tarsal joint applies only to an idealized normal foot. A flatfoot often never truly locks to form a completely rigid lever, whereas a high arched foot may never truly unlock and thereby remain relatively stiff throughout the gait cycle.

How the Muscles Work During Walking

Although muscles are reasonably considered in terms of their primary motion they create, it is important to recall that they may be used [and are critically needed] as antagonists to the opposite motion. In simple terms, one may think of the biceps in the upper arm as a muscle that flexes the elbow yet the biceps also works to slow down the extension of the elbow joint when there’s a weight in the hand – a so-called eccentric contraction. Indeed, it is during such a motion that the biceps is typically torn.

Similarly, the posterior calf muscles work both in active plantar flexion, as during heel rise and toe off, to propel the body forward, and in resisted dorsiflexion, to decelerate the ankle joint during late flatfoot. The eccentric contraction of the posterior calf muscles during this phase generates an extraordinary amount of internal force and therefore it is during this stage of gait that most ruptures of the Achilles tendon occur.

The primary sign of an antalgic gait is the reduced amount of time spent in the stance phase. This is because people do not want to spend any more time than necessary on a foot that is causing them pain. While the stance phase is usually divided equally between the two legs, someone with a painful foot will spend perhaps only 20-30% of their gait cycle in stance. Another related sign of painful gait is a decreased stride length, which results from patients not wanting to push off from their painful foot as powerfully as normal. Taken together, the limping pattern associated with a painful foot is an abbreviated stance phase, coupled with a lengthier swing phase, both in terms of time and distance covered.

A high-steppage gait pattern is seen in patients whose anterior compartment muscles do not function normally (as may be seen in patients with a drop foot from an injury to the common peroneal nerve). Ordinarily, a lack of anterior muscle compartment functioning causes the foot to slap onto the ground during the heel strike phase of walking. Patients respond to this problem by bending (flexing) their knee more than normal during the swing phase of gait (the time when the foot is off the ground). This bent knee tends to keep the foot higher off the ground, and thereby prevents it from slapping.