Depending on the severity of the curve and age of the patient, scoliosis can be managed with observation, bracing, or surgery. While scoliosis is not generally associated with pain during adolescence, more advanced curves (>40 degrees) can be associated with higher rates of low back pain in adulthood. 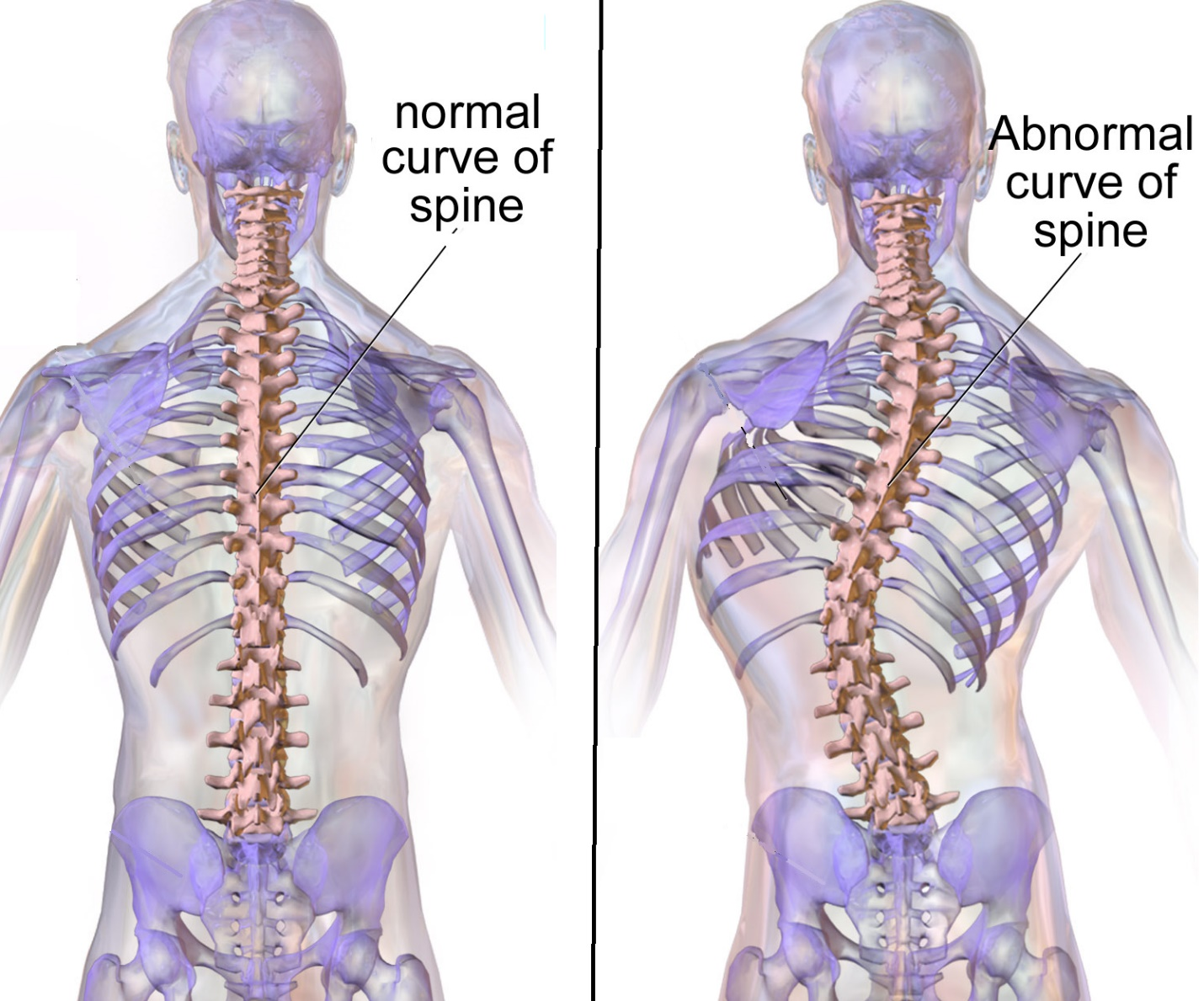 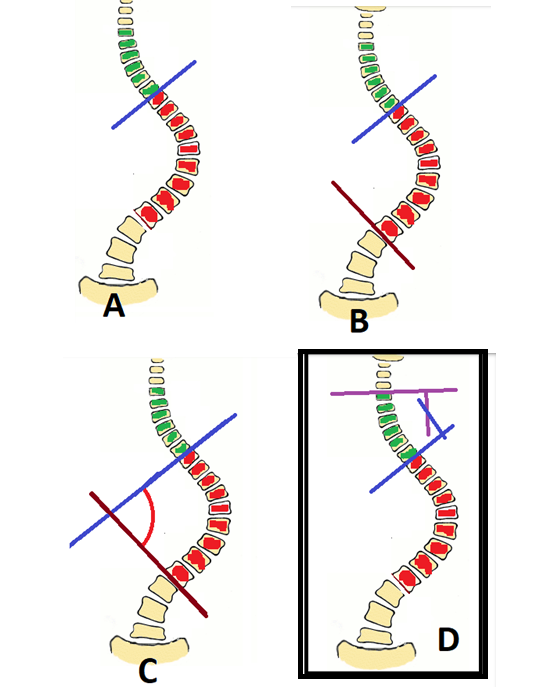 Figure 2: The magnitude of a scoliosis curve is given by the Cobb angle. To measure the Cobb angle, one must first identify the “end vertebrae,” the top and bottom-most vertebral bodies in the curve. (As shown in the figure, this spine has 2 offsetting curves, denoted by green and red vertebral bodies.) Lines are then drawn along the superior endplate of the highest vertebral body (A) and the inferior endplate of the lowest vertebral body (B). These lines are then extended until they intersect; the angle between them is the Cobb angle (C). For smaller curves, the angle may be sufficiently small that the lines may not intersect on the films. In that case, the lines are extended only a short distance, but perpendicular lines are drawn from each towards the other line (as shown in D). The intersection of these perpendiculars (owing to geometry’s rule of similar triangles) likewise defines the Cobb angle. The curves shown here are approximately 40 and 90 degrees. (Modified from Wikipedia).

In the coronal plane, the spine should be straight (<10 degrees of curvature), but on the sagittal plane the lumbar spine typically has 20-55 degrees of lordosis (inward curving, as seen from the side), while the thoracic spine has a physiologic kyphosis (an outward curve or hunching of the spine) of 20-45 degrees.

Adolescent idiopathic scoliosis is classically described as a painless condition. Low back pain is becoming increasingly more common among adolescent patients, and some of them will have scoliosis; but scoliosis should not be the default explanation of the symptoms.

A common complaint of adolescent idiopathic scoliosis patients is the appearance of the back and posture from a pronounced rib “hump,” trunk shift, and uneven shoulders. Appearance issues can range from mild dysphoria to debilitating psychosocial distress.

Scoliosis may progress with growth. It is therefore important to establish the patient’s growth history and document growth at each follow-up visit. On average, boys grow until the age of 16 and girls grow until the age of 14, or 2 years after menarche. Predicting growth is difficult, but some tools to help predict remaining growth include the Risser sign and Sanders stage (discussed below).

A complete physical exam begins with inspection of the patient standing upright facing away from the examiner. Scapular prominence, waist crease asymmetry and arm-side space can be observed. From a lateral view, the hypokyphosis of the thoracic spine can also be noted. Shoulder asymmetry, trunk shift and pelvic asymmetry can be observed and palpated. During the examination, it is important to identify a potential leg length discrepancy that can mimic scoliosis. If leg length difference is noted, the examiner can place a block under the shorter leg to assess if the curve corrects.

The Adam’s forward bending test is an easy screening test. It is performed by having the patient lock his or her knees in extension and attempt to bend forward and touch toes. The patient is then observed from behind, to note the presence of an asymmetries of the rib cage and shoulder blades. Any rib prominence should be measured using a scoliometer (Figure 3). A rib prominence deformity greater than 7 degrees should prompt an evaluation by a pediatric spine specialist. As a rule of thumb, 7 degrees of prominence on Adam’s forward bending test corresponds curve measuring about 10 to 20 degrees on x-ray. 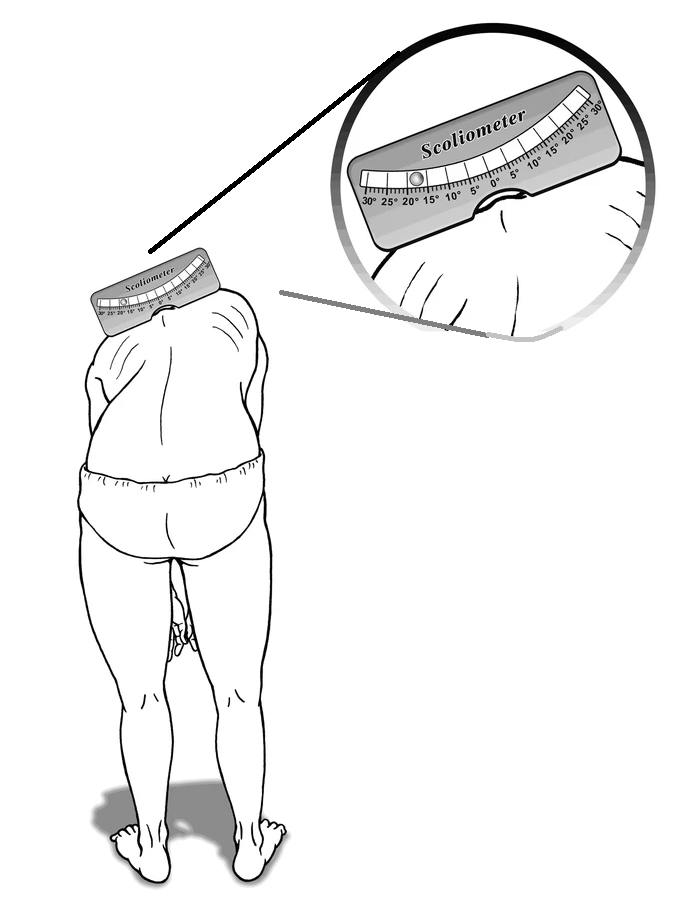 Figure 3: The Adams forward bending test. (A scoliometer, as shown, is nothing more than a carpenter’s level with a cutout to rest on the spine and markings to indicate the angular deviation from the horizontal.) (Modified under a Creative Commons Attribution 4.0 International License from Application of two-parameter scoliometer values for predicting scoliotic Cobb angle. BioMed Eng OnLine 16, 136 (2017). https://doi.org/10.1186/s12938-017-0427-7)

There are important radiographic parameters to help with diagnosis and management of adolescent idiopathic scoliosis: 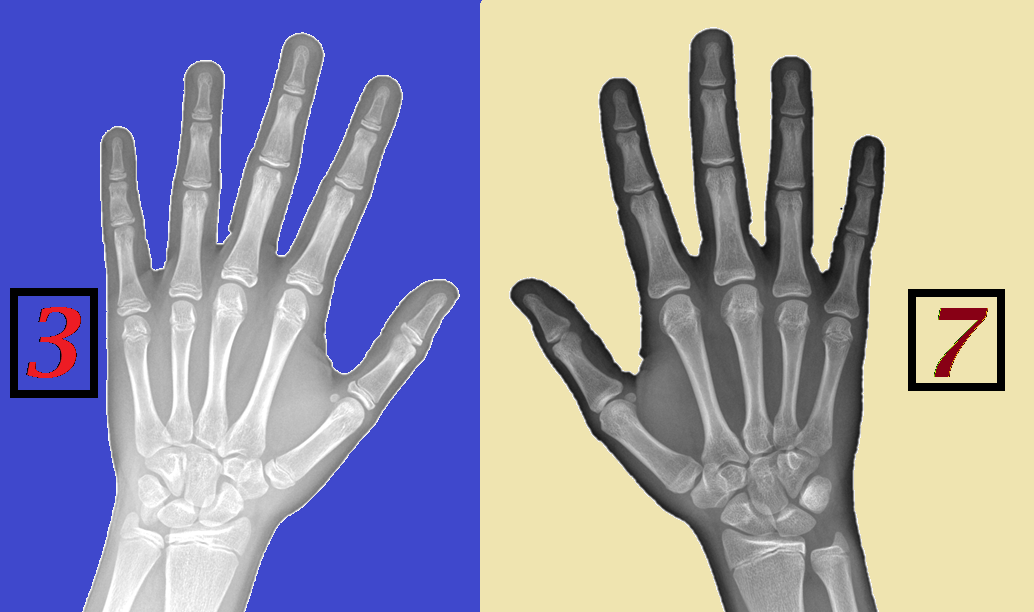 Figure 5: A hand x-ray corresponding to Sanders Stage 3 on the left and Stage 7 on the right. Note that in Stage 7, all physes are closed except for the distal radius physis, whereas the phalangeal and metacarpal physes are open in Stage 3.

Adolescent idiopathic scoliosis is relatively rare, with a prevalence of 3% in the general population. The prevalence of severe curves (>30) is much lower, approximately 0.03%. When considering only large curves, females are ten times more commonly affected than males, but the ratio is closer to 1:1 for cases with smaller curves.

So-called neuromuscular scoliosis is found when there are irregular spinal curvatures in the presence of the central nervous system or muscular disorders. In contrast to adolescent idiopathic scoliosis, neuromuscular curves tend to progress more rapidly, involve more vertebral levels, progress after maturity, and are usually associated with pelvic obliquity.

Scheuermann’s Kyphosis is a spinal deformity causing rigid thoracic hyperkyphosis (>45 degrees). In general, adolescent idiopathic scoliosis is associated with “flat back,” or loss of normal kyphosis and lordosis. 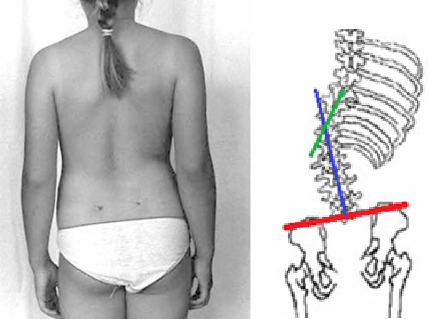 Figure 6: At left, a photograph of a patient with pelvic obliquity. This is defined (in the diagram at right) by the red line drawn across the iliac crests. The lumbar spine is accordingly tilted as well (blue line), with a compensatory curve above (intersection of green and blue lines) to keep the head centered over the body. (modified from https://www.ncbi.nlm.nih.gov/pmc/articles/PMC3282518/)

It is important to identify red flags during adolescent idiopathic scoliosis evaluation, which will warrant further investigation such as MRI to assess for intraspinal abnormalities such as syrinx, Chiari malformation, or cord tethering that may need to be addressed prior to curve correction. These include left thoracic curves (right thoracic curves are far more common), apical kyphosis (kyphosis is rare in adolescent idiopathic scoliosis), rapid progression of a curve, structural abnormalities such as a hemivertebrae, neurologic findings such as pathologic reflexes or radicular pain, and foot deformities.

Curves measuring more than 20 degrees on initial presentation require intervention. The goal in treating patients with curves of more than 20 degrees but less than ~50 degrees (see Figure 7) is to prevent progression - not correction. This goal can often be achieved with thoraco-lumbar bracing. A landmark multicenter, prospective, randomized trial known as the Bracing in Adolescent Idiopathic Scoliosis Trial (BrAIST) demonstrated a 72% success rate at preventing curve progression to 50 degrees or more compared to 48% in the observation cohort. Given the effectiveness of bracing, the trial was terminated early. Multiple societies, including the Scoliosis Research Society (SRS), Pediatric Othopaedic Society of North America (POSNA), American Academy of Orthopaedic Surgeons (AAOS), and American Academy of Pediatrics (AAP) all recommend bracing in cases of adolescent idiopathic scoliosis with growth remaining and curves between 20-40 degrees to prevent progression and avoid surgical intervention. Needless to say, patient compliance is key: brace therapy is effective only if the brace is worn. 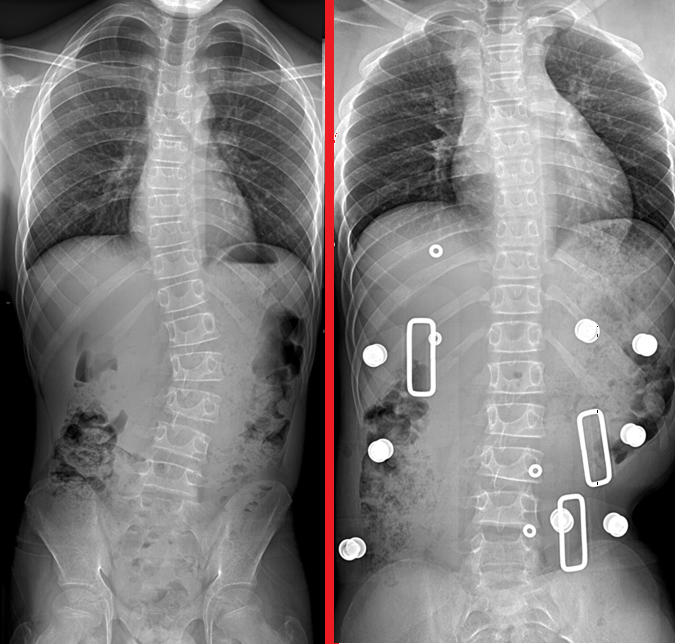 Figure 7: Anteroposterior plain film radiograph of a patient with major lumbar curve of 36 degrees prior to bracing [left] and a radiograph of same patient in brace demonstrating curve correction while in a brace [right].

For patients with curves measuring more than 45 to 50 degrees, surgery may be the best option to correct the deformity and halt curve progression. In addition to the severity of the curve, it is ideal that patients be close to or have reached skeletal maturity.

(The precise indication for surgery is based on expert opinion. According to the website of the American Academy of Orthopaedic Surgeons in August 2020, “Most scoliosis surgeons agree that children who have very severe curves (45-50° and higher) will need surgery to lessen the curve and prevent it from getting worse.”)

Surgical techniques are variable and continue to evolve with emerging technology, but the ultimate goal is to help correct deformity and achieve a solid fusion. A common technique used today is stabilization of the spine with pedicle screws and long rods until posterior spinal fusion is achieved (Figure 8). 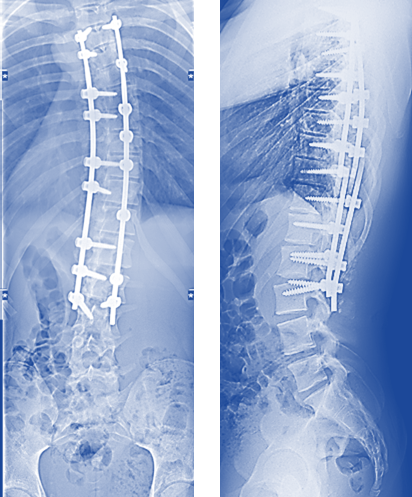 Figure 8: Surgical correction of scoliosis with a posterior spinal fusion, T4 to L3.

Surgery is usually successful. In some patients who undergo posterior spinal fusion at a young age, the anterior column of the spine can continue to grow, creating a rotation deformity. This complication can be prevented by delaying surgery until skeletal maturity or performing anterior based spinal fusions to halt growth of the anterior vertebrae

Currently, there are no known preventable risk factors for adolescent idiopathic scoliosis. As such, much effort has been focused on screening to help with early diagnosis and bracing to prevent the need for surgery.

A few studies have reported on the relationship with scoliosis and exercise and/or posture. Although healthy ergonomic posture and core strengthening are encouraged, there is no Level 1 evidence that demonstrates prevention or reversal of scoliosis based on posture and exercise or physical therapy programs.

Although adolescent idiopathic scoliosis is considered to be painless, residual curves (especially those measuring 50 degrees or more) may be associated with increased incidence of low back pain in adulthood.

Scoliosis need not interfere with high level athletic performance. Usain Bolt (Figure 9), one of the fastest sprinters in history, reported in his autobiography that he has scoliosis. 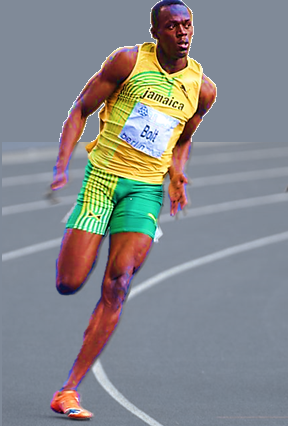