The glenohumeral joint of the shoulder is a ball and socket joint in which the glenoid cavity of the scapula forms a socket for the humeral head. Unlike the femoral head of hip, the humeral head in the shoulder is not truly constrained within a socket: the glenoid is relatively shallow and thus the relationship of the humerus to the glenoid is akin to that of a golf ball on a tee (See Figure 1). This arrangement allows a far greater range of motion than is seen at the hip - with 120 degrees of unassisted flexion, the glenohumeral joint is the most mobile joint in the body. This motion, though, comes at the price of stability. 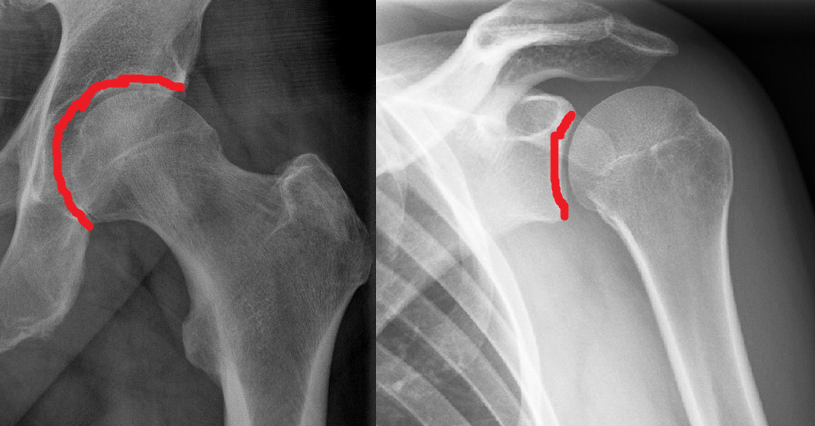 Stability of the glenohumeral joint is provided by the soft tissues. Dynamic (active) stability is a product of paired rotator cuff contraction, which tends to compress the humeral head into the glenoid cavity. The main source of static (passive) stability comes from the joint capsule (Figure 2) and ligaments, with some static stability coming from the glenoid labrum, which effectively deepens the glenoid.

Figure 2: The capsule, outlined in blue, holds the humeral head against the glenoid, substantially augmenting the (meager) stability offered by the bony anatomy. (Modified from Gray's Anatomy, Plate 327 https://commons.wikimedia.org/w/index.php?curid=108237)

Adhesive capsulitis is caused by contracture of the capsule and intra-articular adhesions which physically tether the joint capsule to surrounding bone and tissues and further limit motion.

Histologically, early adhesive capsulitis is dominated by inflammation of the synovium. With disease progression, the inflamed synovium is replaced with diffuse fibrosis of the shoulder capsule.

Patients with adhesive capsulitis present with gradual unilateral shoulder pain that is often diffuse and worse at night. They also report an insidious onset of increasing stiffness. Some patients may “remember” a trivial trauma inciting the process, though this is likely a faulty attribution.

The Painful (or “freezing”) Phase begins gradually, with no known precipitant. This phase, which lasts weeks to months, is characterized by diffuse, disabling pain that is worse at night.

The Stiff Phase is noted by marked stiffness that limits range of motion in multiple planes, interfering with activities of daily living. Pain is less intense at this point. This phase can last a year or longer.

Most patients enter a Resolution (“thawing”) Phase during which motion improves, though often some limitations of range of motion compared to the contralateral shoulder remain.

On physical exam, patients with adhesive capsulitis have significantly reduced active and passive range of motion in two or more planes (see Figure 3 for normal ranges of motion). External rotation and abduction are the most commonly affected movements. Patients also have difficulty internally rotating. They might report problems scratching their back, for example, or hooking their bra from behind. 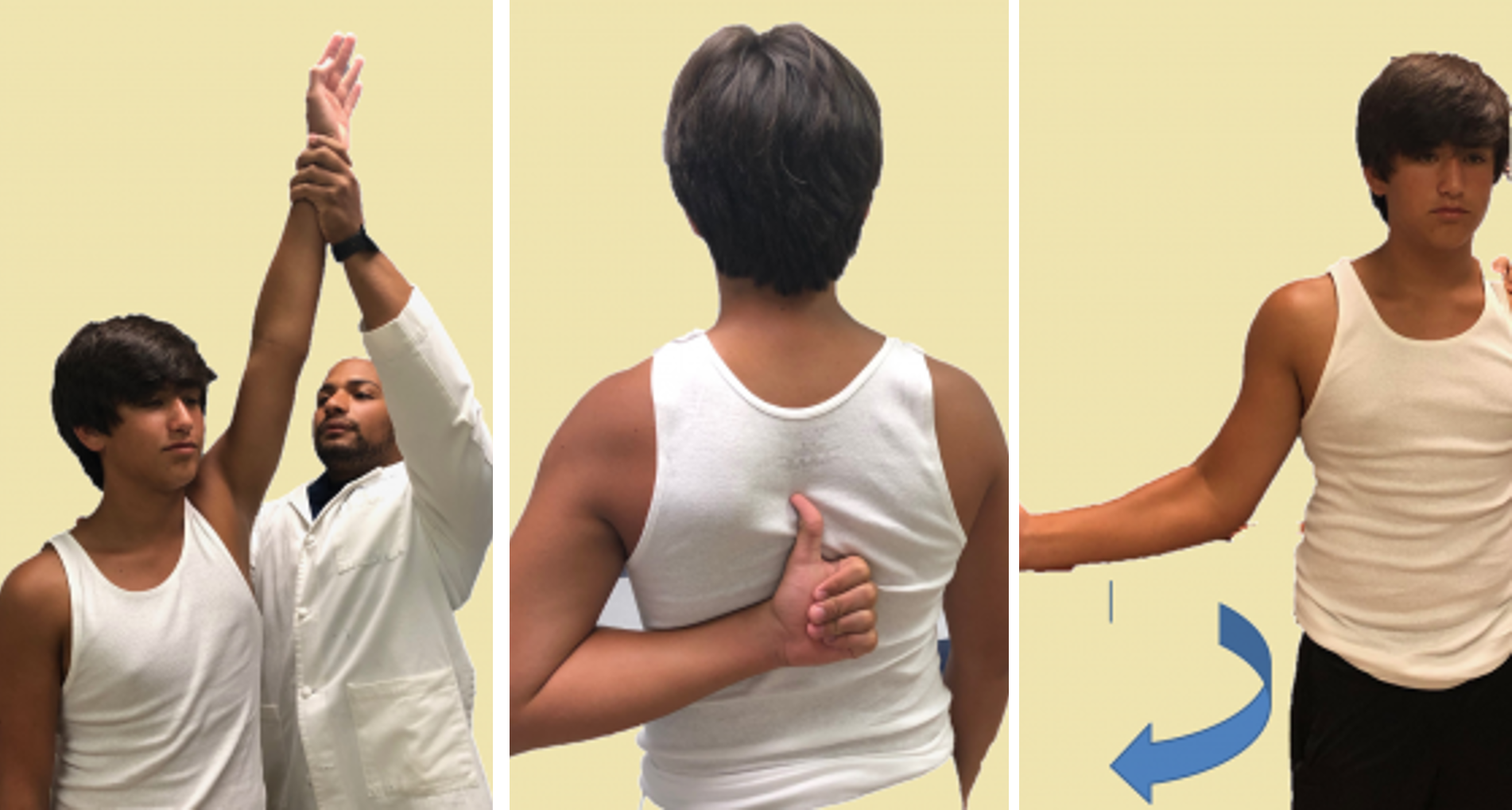 Figures 3: At left, the normal ranges of motion for forward elevation; in the center, internal rotation; and at right, and external rotation are shown.

The critical finding of adhesive capsulitis is a loss of the end range of passive shoulder motion that is not limited by either pain or an intra-articular blockage. Adhesive capsulitis is a clinical diagnosis, made once radiographic evidence of underlying rotator cuff pathology and osteoarthritis is excluded.  An inconsistent range of lost motion on examination precludes making the diagnosis of adhesive capsulitis. Lost motion of an inconsistent degree is more likely due to pain, malingering or other forms of active limitation, and not capsular contracture.

An intra-articular injection of an anesthetic can help eliminate the restrictions of motion imposed by pain.

Arthrography, in which the contracted joint is injected with contrast prior to imaging, can reliably diagnose capsular contracture:  the normal shoulder accepts 20 ml of fluid without difficulty, but with adhesive capsulitis the shoulder usually holds less than 10 ml (Figure 4). Nonetheless, the degree of lost volume does not correlate perfectly with the degree of lost motion.

Figure 4: An arthrogram showing a reduced volume of contrast material within the shoulder joint. The red line outlines the border of the normal border of the capsule. (Modified from Radiopaedia.org, https://radiopaedia.org/cases/7545, rID: 7545)

In primary adhesive capsulitis, there are no specific laboratory findings. Nonetheless, lab tests are commonly obtained once the diagnosis is made, to help identify a cause (e.g., diabetes).

Ultrasound can be used to rule out rotator cuff or bursal pathology. On ultrasound, thickening of the coracohumeral ligament and increased vascularity around the intraarticular portion of the biceps tendon may be seen with adhesive capsulitis.

Magnetic Resonance Imaging is also used to investigate the painful shoulder, as it is very sensitive for rotator cuff disease. MRI findings in adhesive capsulitis include thickening of the coracohumeral ligament and joint capsule with associated edema at the rotator cuff interval. MRI may demonstrate capsular thickening and decreased axillary pouch filling (Figure 5). 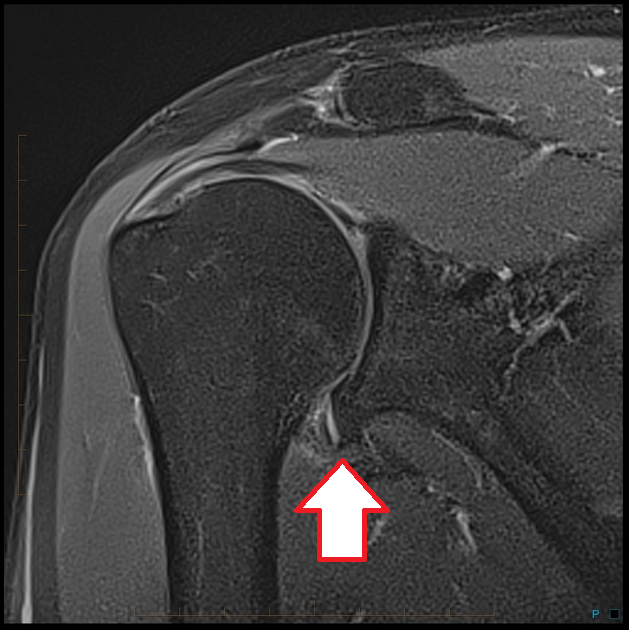 Figure 5: An MRI showing decreased volume of the axillary recess highlighted by the arrow. (Modified from https://radiopaedia.org/cases/adhesive-capsulitis-shoulder-3)

It is estimated that approximately 5% of the general population, and 20% of patients with diabetes, will develop adhesive capsulitis in their lifetime. Adhesive capsulitis typically affects patients in their fifth or sixth decade, with a predilection for women. The non-dominant side is more frequently affected, though this bias may be a function of the patient’s ability to not use the non-dominant side, which thereby allows the soft tissues to stiffen. Symptoms will develop in the contralateral shoulder in approximately 20% of cases.

Another aspect of the patient history that can be very helpful in differentiating between different pathologies is the patients age. Primary adhesive capsulitis is rare in patients younger than 40 or older than 70 years.

Lost motion can be caused by glenohumeral arthritis, and therefore the diagnosis of adhesive capsulitis is reserved for cases in which no significant degenerative joint disease is seen.

The pain of adhesive capsulitis is usually found at the endpoint of motion, as the capsule is stretched. Until that is encountered, symptoms are minimal.

Sudden loss of motion may be caused by an unrecognized dislocation.

Night pain that awakens the patient from sleep may be due to occult malignancy that requires accurate diagnosis to guide treatment. Chronic shoulder pain with radiculopathy may suggest cervical spine pathology.

Adhesive capsulitis is a self-limiting disease, yet benign neglect is usually poorly tolerated. Due to the protracted course of adhesive capsulitis, which can take 2 years to resolve, many patients are unsatisfied with this lengthy period of pain and disability and are not comforted by the knowledge that the condition will eventually resolve. The pressure to “do something” is great.

The most commonly employed treatment for adhesive capsulitis is physical therapy to prevent soft-tissue contracture as well as to improve shoulder motion. This treatment may be limited to passive motion, as the patient is too symptomatic to do more actively.

Pharmacologic intervention is often included as empiric treatment in conjunction with therapy. Oral non-steroidal anti-inflammatory drugs may be given to modulate shoulder pain (whether they decrease capsule inflammation is not known).

Patients may also receive intra-articular corticosteroid injections for pain relief. The benefits of oral corticosteroids have not been shown to outweigh their risks. Intra-articular steroid injections may better optimize local concentrations of medicine and avoid systemic effects. Adding a large volume of saline may help lyse adhesions and stretch the capsule (a procedure known as “infiltration brisement” or “hydro-dilution”). This has a risk of capsular rupture, however.

Manipulation under anesthesia is generally regarded as a second-line treatment, chosen when non-operative treatments fail. Some potential risks include iatrogenic humeral dislocation or fracture, and soft tissue injury such as rotator cuff or labral tears.

Arthroscopic capsular release may be chosen in severe cases. Arthroscopic treatment has several advantages including visualization and exclusion of other diagnoses and focal lysis of adhesions in the coracohumeral ligament, rotator interval and inferior pouch (unlike manipulation, which stretches everything indiscriminately). Additionally, active range of motion can be performed soon after surgery to prevent new scar formation. Despite its advantages, arthroscopic capsular release is not without risks. Entering the joint capsule can be difficult due to a thick capsule and reduced joint space making insertion of trocars difficult and potentially damaging to the articular cartilage if excess force is applied.

The capsular changes in adhesive capsulitis shares some similarities to the fibrous contractures seen in Dupuytren’s disease. The 2016 Richard A. Brand Award winning paper reported promising results using collagenase, an enzyme used in the treatment of Dupuytren’s, to treat adhesive capsulitis.

Although adhesive capsulitis is a self-limiting disease, some patients may continue to demonstrate either shoulder pain and/or stiffness at 7-year follow-up.

Despite widespread use of physical therapy for the treatment of adhesive capsulitis, little evidence supports its use: a Cochrane database review was unable to confirm its benefit as a treatment. Still, retrospective case series evidence has demonstrated 90% of patients treated with a multi-directional stretching program were satisfied with their clinical result and given the pressure to take some action, this approach seems justified even in the face of poor evidence.

Treatment with oral medication has no high-level evidence supporting its use for treatment of adhesive capsulitis. One study has demonstrated that a 4-week regimen of naproxen or indomethacin had similar success for lowering pain levels. Risks of NSAID use include GI distress.

Secondary adhesive capsulitis is associated with medical conditions such as diabetes mellitus, thyroid disease and stroke; medical interventions such as prolonged immobilization, cardiac surgery and antiretroviral therapy for HIV; and injuries such as rotator cuff tears or proximal humerus fractures.